With the second week of play now over, let’s have a look at how the results affected the LATAM standings.

It has been an intense week in LATAM as three teams have already secured Copa Elite Six Stage 3 qualification.

Saturday was a very one-sided day in Brazil, as none of the matches saw more than ten rounds played.

FURIA Esports made a massive step forward towards confirming its CES qualification, as the panthers defeated Santos by 7-2. The young fragger Diogo “Fntzy” Lima led his team to victory, with 13 kills in 9 rounds, and a SiegeGG rating of 1.81.

The same result was seen in the next match, as Black Dragons defeated INTZ. However, the game result took somewhat of a back seat to the relationship between Black Dragons’ Bruno “peres” Peres and INTZ’s Rafaela Miranda.

Due to issues with his health, Diego “ZaaK” Balejo had stepped back from INTZ’s roster for the game, which saw Miranda substituted in for him.

The following game blew everyone’s minds, as the Mexico Major winner Team oNe got a flawless 7-0 win against the SI 2021 champion, Ninjas in Pyjamas. The Mexico Major SiegeGG MVP Juliano “Levy” Andrade obtained a Rating of 1.97 as he finished with a K-D of 10-1 and a KOST of 100%.

Last, but not least, FaZe Clan put to an end to MIBR’s unbeaten streak in Stage 3 with a 7-3 victory on Villa. The game was somewhat close while MIBR was defending, as the teams swapped roles with a 3-3 on the scoreboard. However, FaZe’s defences were far more solid, and MIBR's attacks could not match its opponent.

The experienced Brazilian duo of Leonardo “Astro” Luis and Gabriel “cameram4n” Hespanhol led their team, with Ratings of 1.53 and 1.45, respectively. 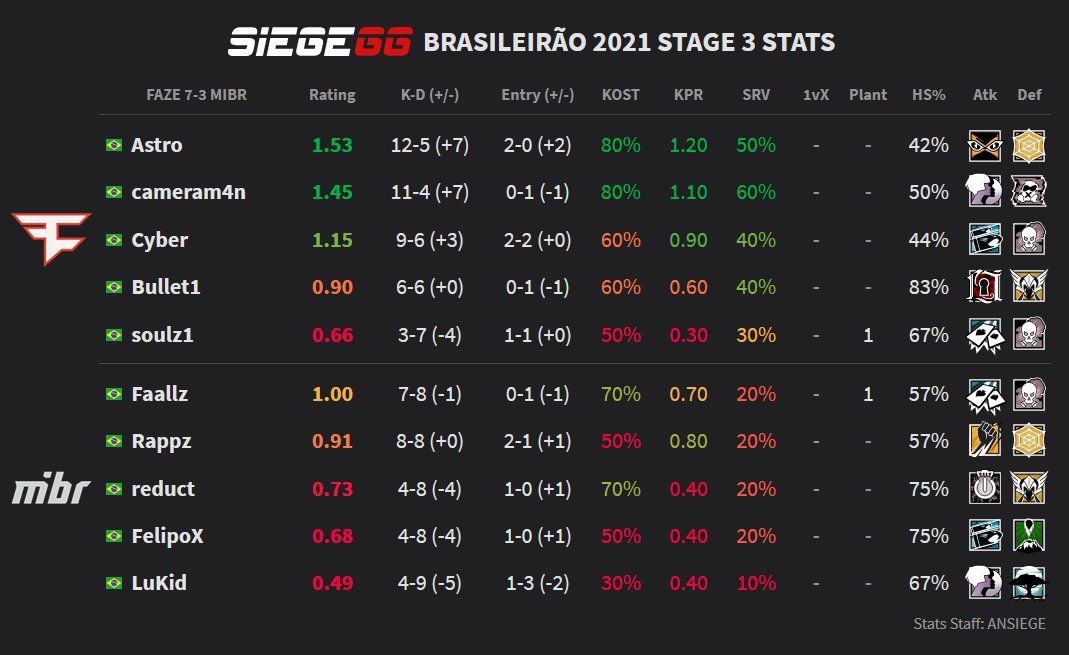 Sunday’s action began with another FaZe Clan match, this time against Black Dragons. The game saw utter dominance from FaZe Clan, as the Brazilians won the match by 7-0. José “Bullet1” Víctor was the best player in the game with a Rating of 2.12 and a KOST of 100%.

With these weekend’s victories, FaZe Clan is the first Brazilian team to secure a spot to compete at the CES Stage 3.

Team Liquid followed, as the team played its third overtime of the stage, with all of its matches so far having finished with 8-7 scorelines. After winning against Ninjas in Pyjamas and falling to FaZe Clan last week, it was INTZ that dealt Liquid a second defeat.

The last two matches of the day also ended with 8-7 scorelines, as Ninjas in Pyjamas defeated FURIA Esports, while W7M Gaming won against Santos e-Sports. However, Santos’ recent results put them five points above the relegation zone.

The two best Mexican squads in ‘Siege’ qualified for the CES Stage 3 this weekend.

Atheris had two really good performances against Chivas and Six Karma, beating the two by 7-1 and 7-0 respectively. Meanwhile, Fenix beat Overknight by 7-0 and MeT by 8-7.

That marked MeT’s second maximum overtime loss of the season, as the Mexicans had also fallen to Kingdom Gaming by the same margin. That had been a very important win for Kingdom, with desperate for points to avoid relegations.

Currently at the bottom of the standings, Chivas was smashed by Atheris and Overknight as the football club-backed squad lost both of its matches by 7-1. 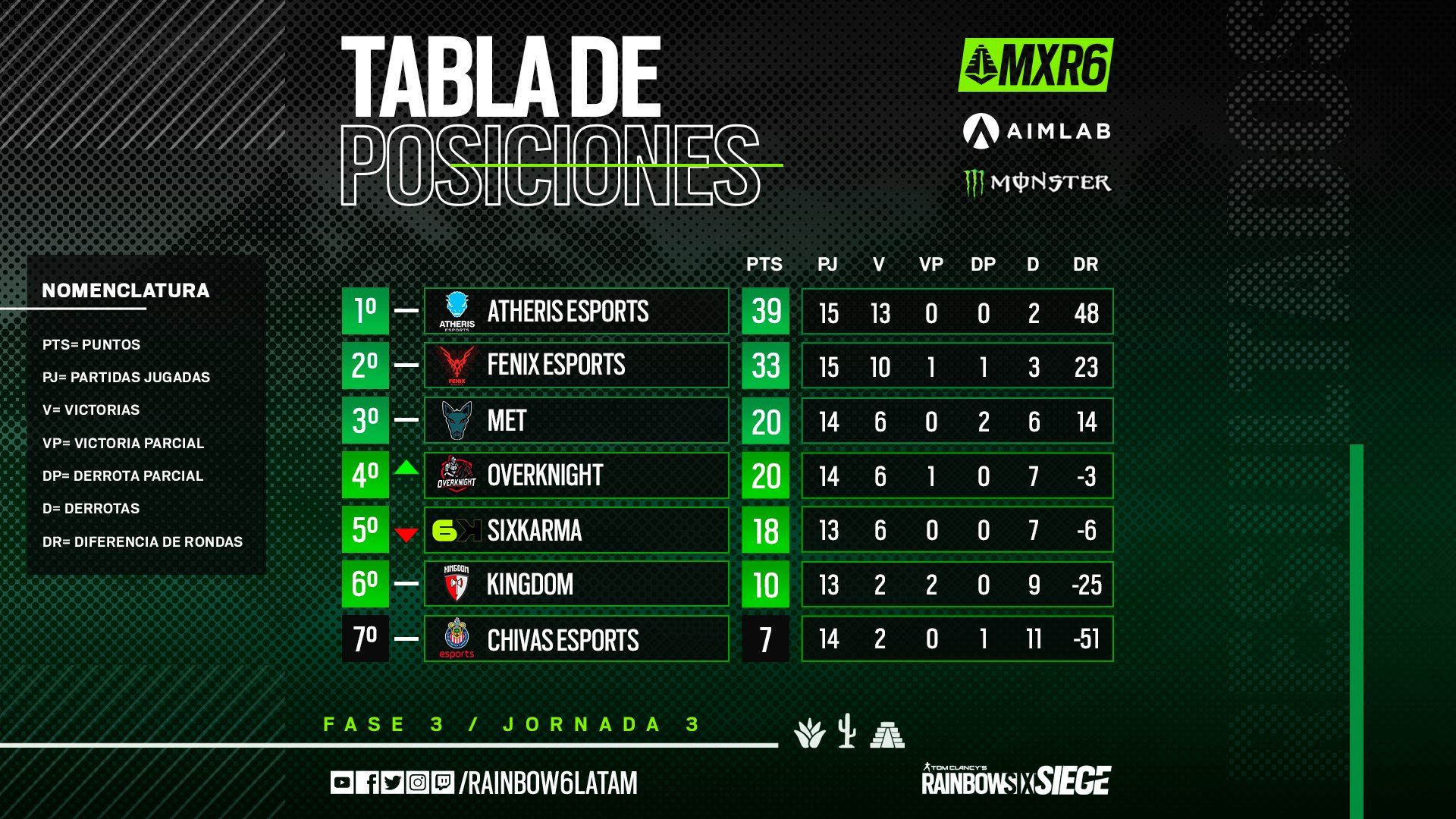 Down in South America, Furious Gaming is one step closer to breaking into the top two after beating both Malvinas Gaming and Newstar by 7-5. Furious’ Valentino “VJ” Jaime, who was the MVP in two of the team's three games this stage, has been his team’s best player so far.

Meanwhile, 9z Team has full control of the league and could secure a Copa Elite Six Stage 3 appearance next weekend. The purple squad obtained two convincing wins against Infamous Gaming and Leviatán Esports, leaving it at the top of the standings with 44 points. 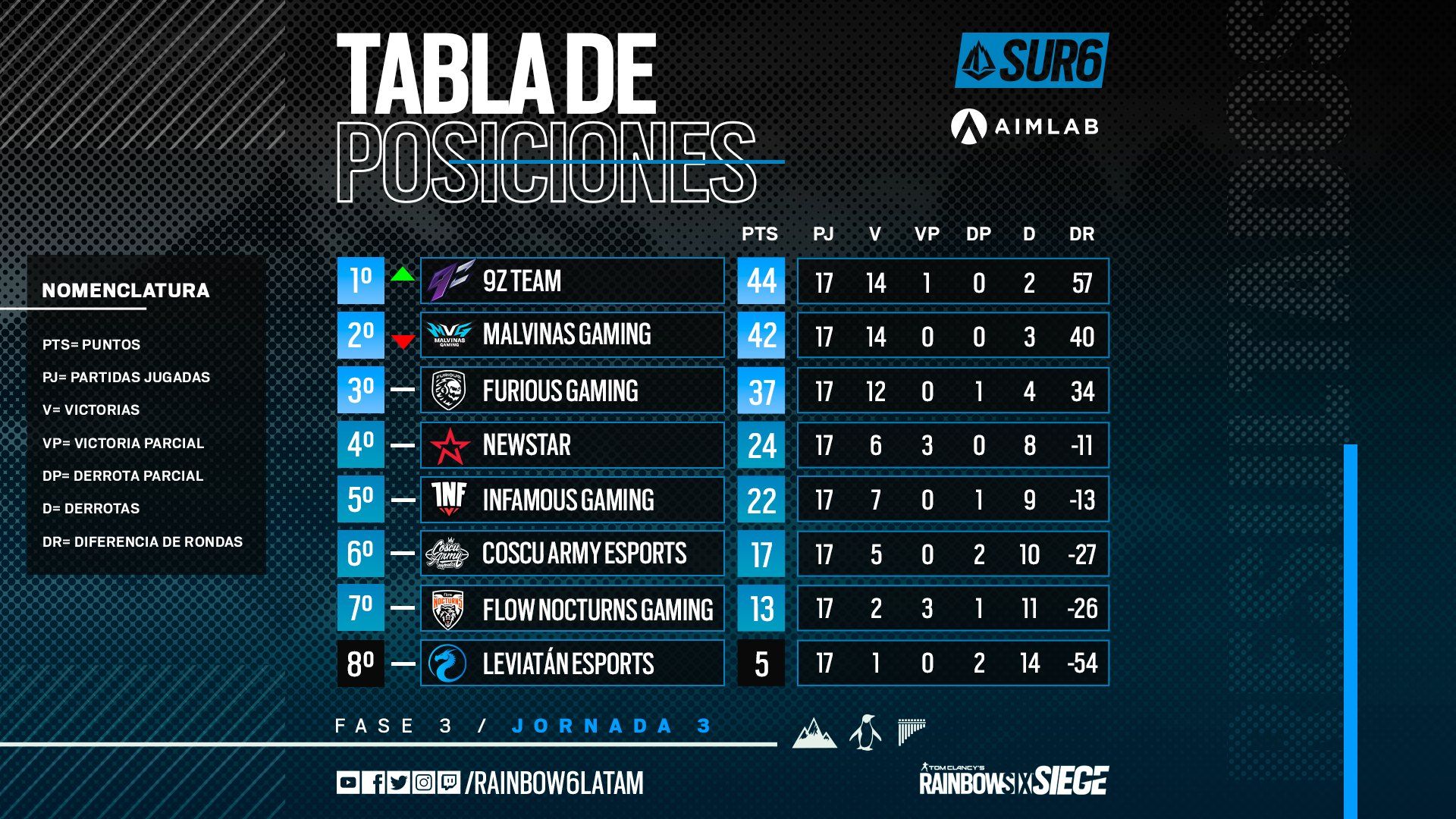 So far, 9z’s Diego “PePe” Villalba has registered the best numbers this split. The Uruguayan’s performance against Infamous was astonishing, as he secured 17 kills in just 9 rounds and a SiegeGG Rating of 2.02.

Infamous’ and Newstar’s results left them outside of the race for a CES invitation, as Furious is the only top two outsider left in the race.