Check out a short rundown of all the news you might have missed this week as Stage 3 kicks-off.

This following week from Sept. 8-15th will see the start and end of national leagues around the world as Stage 3 begins; following a short break around the Six Mexico Major.

Over this time, we'll be updating this article with all interesting announcements and results across these leagues to keep you up to date with these developments. Here are the biggest stories so far:

Halfway through play day one of the Mexican Championship, a power cut has resulted in two of the three games being postponed.

While Atheris managed to finish its 7-5 win over Fenix, the power went out at the LAN venue halfway through the following matchup between Kingdom Gaming and OverKnight. As such, both this game and the following MeT vs Six Karma game has been postponed to a currently unspecified time.

With Kingdom vs. OverKnight already in progress, the game will likely resume with the 4-3 scoreline.

Sunday's relegation matches for the NACL tournament ended with Challenger League teams Oceanus Gaming and 140ms (ex-WaveRunners) losing their relegation games. They will be replaced by 2Faced and Fernys Tacos.

2Faced and Fernys Tacos will now compete during Stage 3 of North America's Challenger League of which the victor will qualify for the NA League relegations in December.

Earlier today a $90,000 streamer show match took place, where four teams of Japanese players were pitted against each other. Each team had an ex-pro coaching it which included the former Nora-Rengo players Yudai "Wokka" Ichise and Yasuhi "CrazyPapiyoN" Nakajo.

Both of these teams had struggled, with Wokka's lineup winning just one out of three matches (against CrazyPapiyoN's roster) and CrazyPapiyoN's winning none.

Following an open qualifier, this tournament saw 10 Saudi Arabian football clubs field rosters for the $760k cup. These all included the biggest teams in the region with Ettifaq picking up the Osh-Tekk Warriors players who earlier this year beat Empire and V.p in the Gamers Without Borders tournament.

This Ettifaq team was the only one able to win a map off of the eventual champions of Al Fateh, which previously finished fourth during the $64k Saudi eLeagues tournament earlier this year.

This means the Al Fateh football club takes home the $170k victors winnings, however, as with the nine other teams also, not all of this money will go to the players. A large bulk of the $760k is being kept as the football club's fee for taking part in the tournament.

Ahead of the start of the Brazilian Challenger League on Monday, a number of different teams have made roster and org changes.

After losing their star player Guilherme Bassetto to Black Dragons, the Brazil Cup runners-up ex-Imperium has joined the TrapBoyz org and added in the ex-CL player from Year 2 "handy".

The core of PS4 Machines -- a roster led by the ex-BD player  Rodrigo "rdz" dos Santos -- have joined the Portuguese organization For The Win Esports and picked up three additional players including the ex-pro Giuliano "ghost1" Domingosas.

Finally, the ninth-seeded roster of Dromedalho has been picked up by Vasco Esports.

The opening week of the Oceanic Nationals Stage 3 tournament saw a major upset as ROFLCOPTER GG -- which had finished the previous two stages in third and fifth place -- beat the APAC South roster ORDER in a strong 7-2 scoreline on Clubhouse.

ORDER then went on to lose 2-7 against Wildcard the following day in what's been a very rough start to the Stage for them.

Elsewhere, Overt almost pulled off an upset in its OCN debut, falling 5-7 to Knights before then beating Rythm 7-5 on Saturday. Finally, the reigning champions of the Chiefs put down both Wildcard (7-3) and Knights (7-1) shooting them right to the top of the league table. 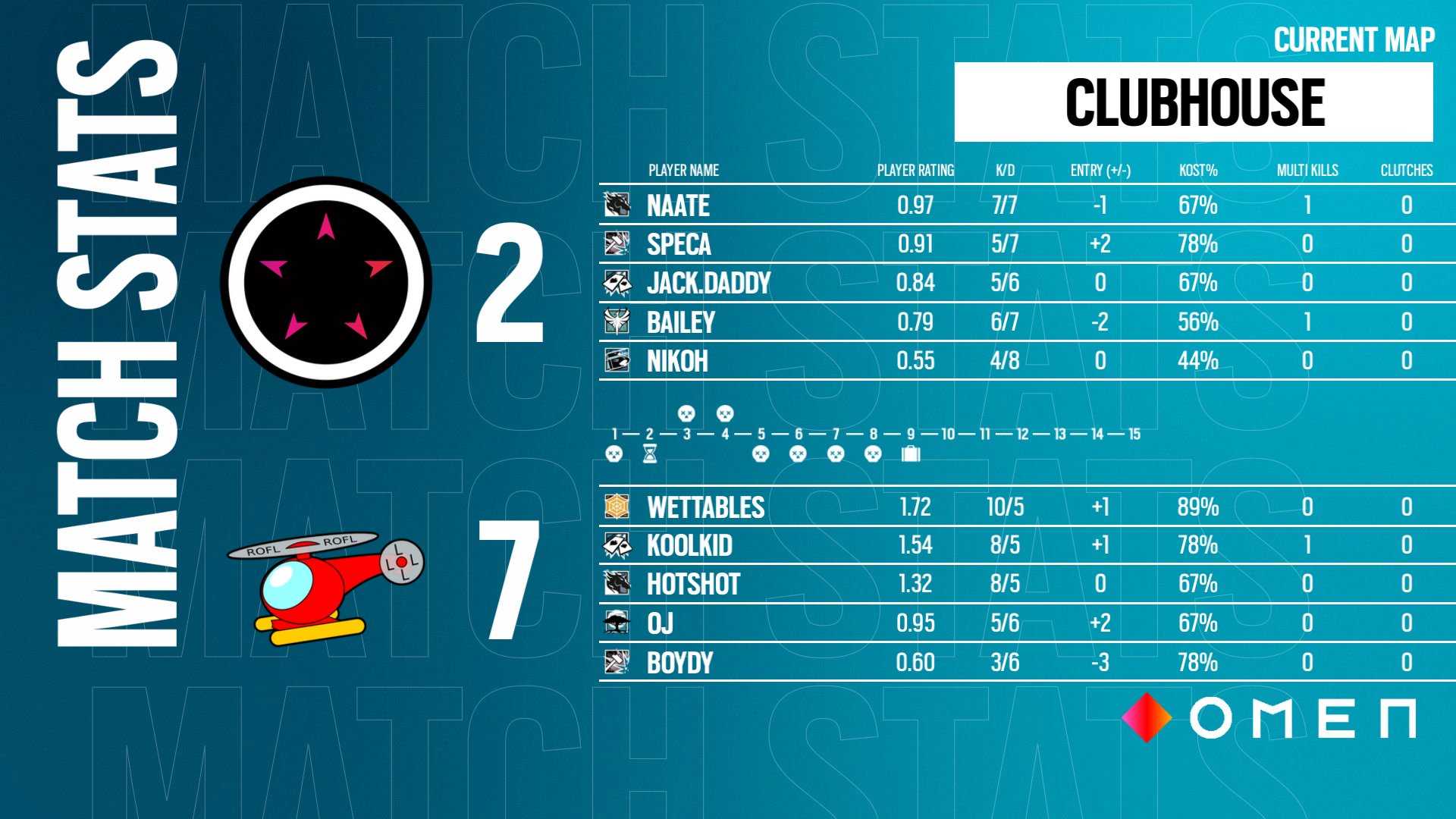 MIBR announces partnership with Itaú, the biggest bank in Brazil

MIBR has announced a major partnership with the biggest bank in the Southern Hemisphere, Itaú Unibanco.

As well as the Itaú featuring on the MIBR jersey, the press release from MIBR also announced that this partnership will lead to upcoming content series around its R6 and CS teams; "[this initiative will] highlight the team’s history in its current context, its players and fans and should feature more and more activations soon".

The open qualifiers for Stage 3's South Asia Nationals will take place on the weekends of September 26th, October 3rd, and October 10th followed by the closed qualifiers on the 22-24th of October.

Check back here later in the week for further updates in all these tournaments above and more.