Team Empire sent Spacestation home with a 2-0 victory to stay on course for a Six Major title defense.

Team Empire defeated Spacestation Gaming 2-0 to secure a semifinal berth, eliminating the no. 1 seed from group B in the Mexico Major today. 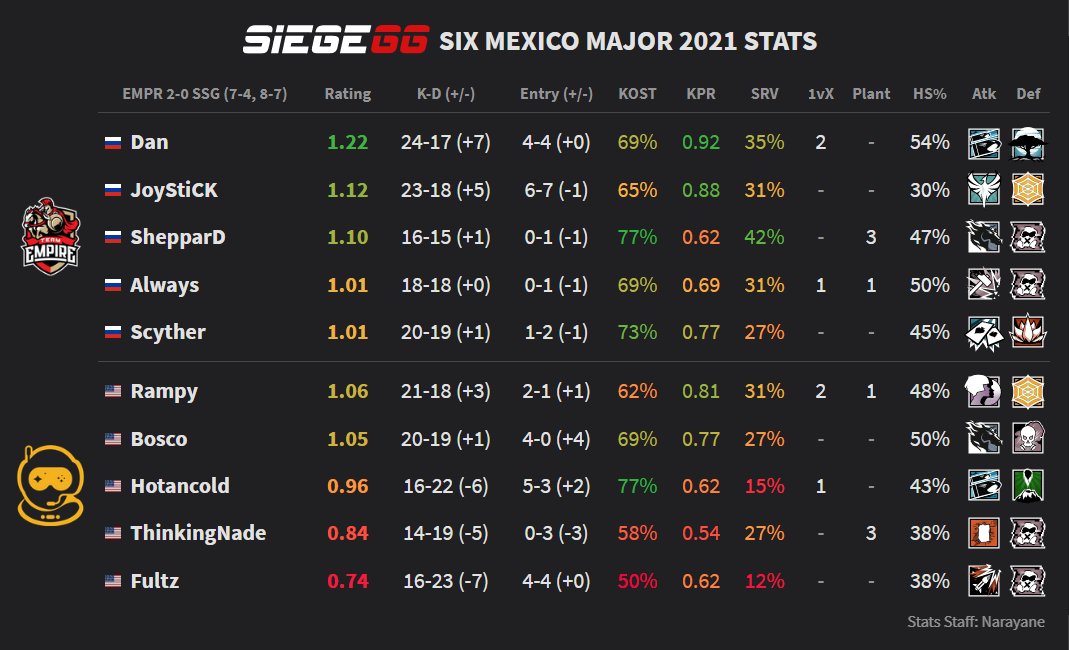 Empire had raced to a 5-1 round count lead on each of the two maps and had largel cruised to a 7-4 win on the first map, Kafe Dostoyevsky. On the second, Clubhouse, Spacestation mounted a valiant comeback effort to push the game to overtime, but the Russians could not be stopped and eventually closed it out 8-7.

“Winning that round [the third round of defense on Gym/Bedroom] really brought the momentum back for us,” said Dylan Bosco, Spacestation flank watch, of the moment the emotional swing came after the 5-1 deficit.

Empire, stylistically, played completely different from map to map, said Bosco. On the Russians' Kafe defense, he notes that they were sitting back, and the sudden shift to Clubhouse where they were “peeking the wall as soon as it’s open” was a bit difficult to adjust to at first. “Something this event has shown us is that we need to be better at adapting,” said Bosco.

“We just didn’t feel any pressure in this game,” said Danila “dan” Dontsov of Empire’s fast starts. “We knew SSG was an insane team, the best team from NA, and we just need to relax and play the game.”

Empire was helped by an excellent statistical performance from dan, who nailed down a 1.22 SiegeGG Rating in the two maps against Spacestation. In addition, Artur “ShepparD” Ipatov has been stellar during the Mexico Major; at the conclusion of the group stage he was ranked fourth overall in SiegeGG Rating and tied for most plants with Team oNe’s Lorenzo "Lagonis" Volpi.

The Spacestation comeback was stymied by a very aggressive round 15 play from dan. Dan explained that Dmitry “Always” Mitrahovich had information on a player in top red stairs, and they decided to make a play on that player. Dan swung into the breach a split second after it was opened, then snagged the crucial first pick.

“They opened, and I ran in,” said dan. From there, dan explained that the chaos it created was enough to win the round; Spacestation didn’t know where to look. The map, and the series, were Empire's.

The sky isn’t falling for Spacestation, though. It still had an excellent Stage 3 in the NAL, and its quarterfinals berth gives it crucial SI points. The North Americans can hang their hats on their comeback effort on Clubhouse; but the ultimate prize -- a return to championship glory -- still eludes them.

Bosco explained that the early rounds were solid for Spacestation, but Empire excels in the late round, and that’s where the Russian side made their gains.

Meanwhile for Empire, dan explained that they, as well as many other teams, learned lots from SI 2021. This iteration of Empire is more adaptable than the past, and that adaptability has so far paid off in dividends.

Empire was the last team to win an international Six Major: the Raleigh Major back in 2019. 2020’s Majors were relegated to regional competition due to the COVID-19 pandemic. Now, the Russian cyborgs move on in the Mexico Major, and will play the victor of the BDS-FURIA match.