Soniqs still have a shot at making it out of the group stage. They're going to be depending on their mindset and composure to keep calm in pressure-filled situations.

Soniqs has been a team that prides itself on keeping its composure, even in the face of tough losses.

After a 1-7 thrashing at the hands of BDS, it will need all the composure it can get heading into its final match of the day against CAG, who defeated Soniqs yesterday.

“We played into CAG’s playstyle and what they wanted,” said Pablo “Gryxr” Rebeil in a Ubisoft-organized press conference with Soniqs. “...In best-of-ones, everything happens so fast and teams are allowed to throw out really ridiculous lineups and strats, just like CAG did to us.”

For many teams, getting whipped 1-7 by the group leader heading into a crucial match for survival would be cause for more than a few deep breaths and some nerves. Soniqs isn’t letting the loss get to them, however. 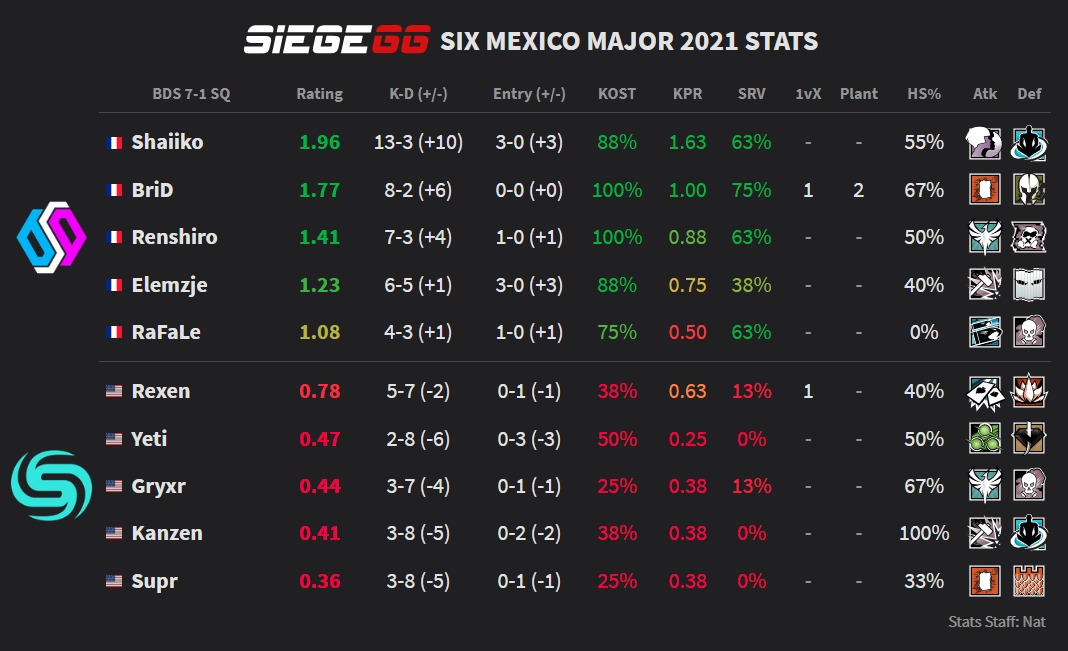 Alexander “Yeti” Lawson explained that the Soniqs players believe that they were “counter-stratted” by BDS in their previous match. The French side had already seen the North Americans' Consulate on Monday, and knew how to play against Soniqs. When you lose that bad, Yeti said, there really isn’t much you can do but accept it and move on.

“That was probably the worst match we’ve played as a team,” said Soniqs captain Seth “Supr” Hoffman. “To me, that’s not even composure. We just got our butts kicked, I don’t think anyone is harping too much on that.”

The Soniqs are going to have to take some very quick lessons away from their BDS loss. A loss in their next match, to CAG, will effectively doom them to a third-fourth finish in their group, barring extremely unlikely circumstances.

An early victory over Team oNe gives Soniqs some breathing room, but not much. Currently, CAG is slotted in over the North American side, but the Japanese can be caught if the Soniqs defeat them in overtime, here and now.

Should Soniqs defeat CAG, it could set up a rematch with Team oNe to decide who advances to the playoffs stage. That match could get very intense, very quick. Some post-game chirping on Twitter after Soniqs’ initial 8-7 victory caused some bad blood that has since been quelled, according to Yeti, but there’s still the matter of the playoff spot.

A point in Soniqs’ favor? They now know what to expect out of the Japanese side. They’ve had time to counter-strat CAG, just as BDS counter-stratted them. The rest of their preparation they’ll have to apply in the server, and not get bogged down by playing CAG’s game, like they did on Monday. They’ll need to apply all the regained composure they have, though, because every match is effectively do-or-die from here on out.

They’ll begin the fight for their tournament life against CAG at 5:30 CDT.