Let's take a look at how exactly the introduction of overtime and the consolation point change the final standings around the world during Stage 1.

The start of the 2021 season in March saw a number of changes to the overtime rules across all leagues and most national tournaments.

This change saw Best-of-One (Bo1) map games go from ending at 6-6 ties to allowing overtime up to 8-7. Additionally, should a game go into overtime, the victor gains just two points rather than three, while the loser gains a single consolation point rather than zero. 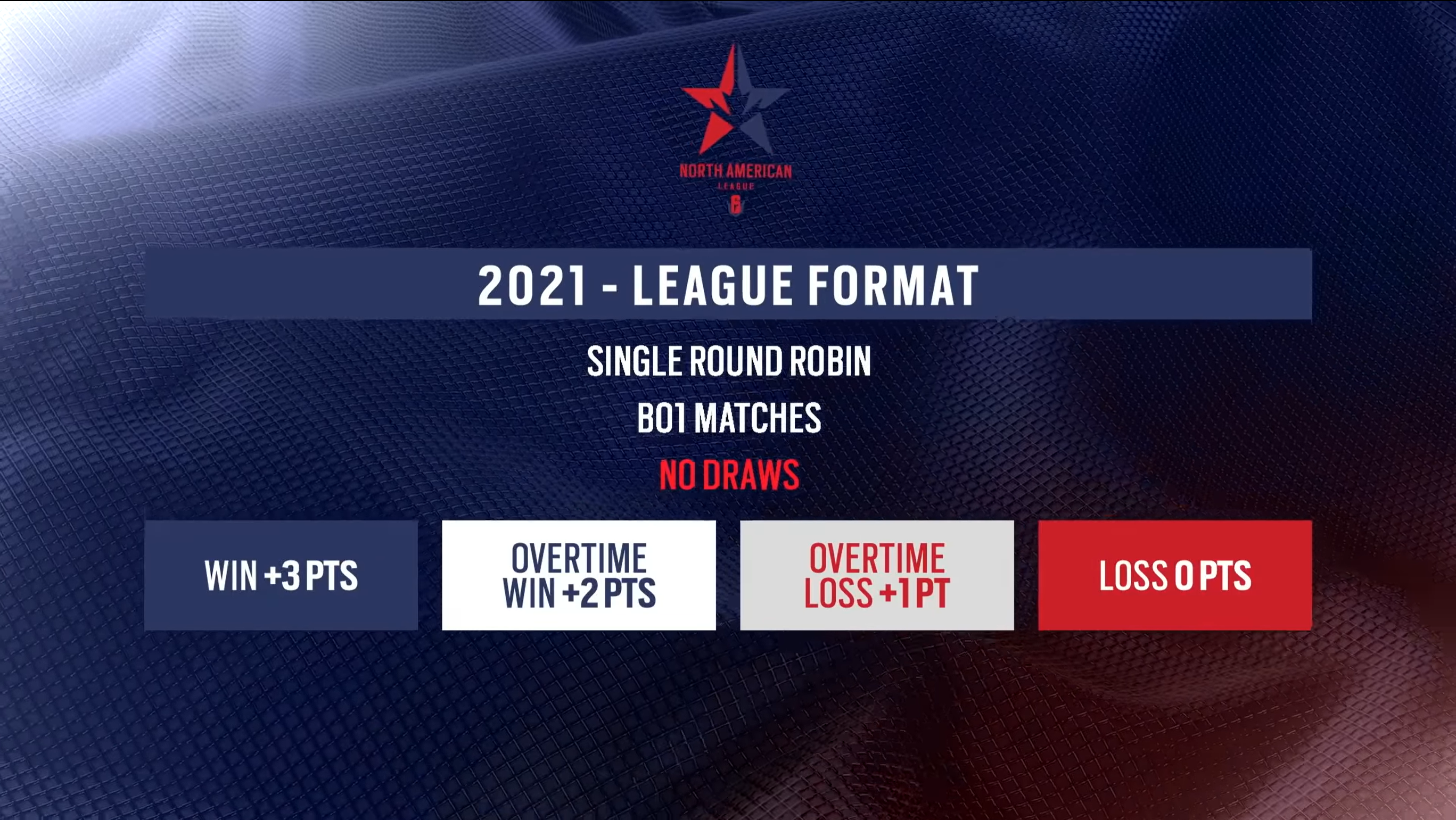 This change was generally accepted as a good thing, as it made close games much more interesting, while not overly punishing close defeats.

Nevertheless, May's Six Invitational 2021 then dropped this format, opting for an all-or-nothing group stage format, with teams earning a full three points from 8-7 wins and zero points from 7-8 defeats.

In total, this changed the final standings across all regions and the Six Invitational so let's take a look back at Stage 1 to see who came off best and worst from the changes.

Disclaimer: This is a look at how each team would have finished with their final results if they were scored under the old rules. Obviously, this doesn't take into account any changes in play style or tactics that these rules would have caused as this is unknown. This isn't done to downplay or discredit any teams but just to see the effect of the rule changes.

Starting with the European League, this was kind of a mess.

With two teams tied for first, three tied for fourth, and just a single win splitting third from seventh, the league was already a tight one. Considering there were 11 overtimes (one in four games), it's clear that these changed rules have made a big difference.

If we were to take the final standings and project it so every overtime gave both teams one point (so it acts as if they all ended 6-6), the key difference is that BDS ends in first place, while G2 rises to third, as both teams lost two overtime contests.

While getting rid of overtime aids the team which would have gone on to lose in overtime, ditching the 2/1 overtime point split and simply awarding three for a win and zero for a loss heavily favours the eventual overtime victors.

This means BDS and G2's overtime losses hurt them here, with the teams dropping to third and sixth, respectively. Vitality, meanwhile won the games against G2, Na'Vi, and V.p in overtime, meaning their gain of a third point from each of these games is a huge boon.

The NA League was much less of a mess, with the Soniqs being the main impacted party due to their three 8-7 victories against XSET, TSM, and OxG.

SSG, meanwhile, have a long reputation of always being stuck to a draw. As they lost all three of their overtime fights -- a feat no other team in the world accomplished -- draws being an option would be one that would have greatly helped SSG during Stage 1.

Considering LATAM includes three separate leagues -- the Brazilian, Mexican, and South American Championships -- as well as the combined Elite Six Cup, all of which use a Bo1 format, you'd think there'd be the most changes here... yet the opposite is true.

While Mexico didn't see a single overtime all stage, the SA Championship and the Elite Six both would see no changes to the standings under either rule changes. The only league that would be affected is the Brasileirão.

While two 8-7 overtime defeats against FaZe and BD make the difference between first and third for Liquid, a rather interesting result would have occurred between Team oNe and Black Dragons in the fight for sixth and the final Elite Six qualification spot.

Under both of the old overtime rules, it would have been Black Dragons, not Team oNe, who would have attended the Elite Six. Considering that Team oNe beat G2 and knocked out SSG at SI, this shows how strong even the lower level BR6 squads must be.

To round off the regional leagues, we have APAC North and South, in which the only major change would have seen Fnatic fail to qualify for the APAC Playoffs under the old all-or-nothing point system amidst an incredibly hard to figure out four-way tie on nine points. 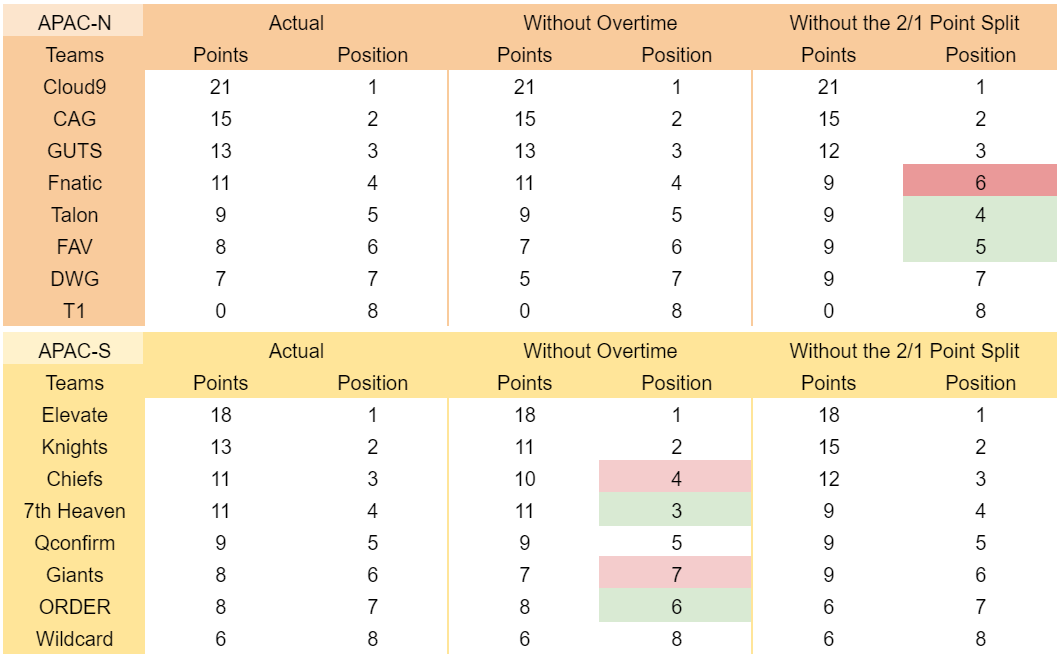 In the South, while a few changes would have happened, the Chiefs and 7th Heaven would have still entered the playoffs but just with different seedings.

And then, there's the SI21. This, unlike all the other leagues had overtime but kept the all-or-nothing point distribution.

While this wouldn't have changed the standings in Group B, this choice had pretty major ramifications for Group B as Cloud9 would have gone home first, not CYCLOPS.

This is due to CAG suffering two 7-8 defeats to FaZe and Empire, meaning that a consultation point for these losses or 6-6 ties would have given them two points to stay ahead of C9. 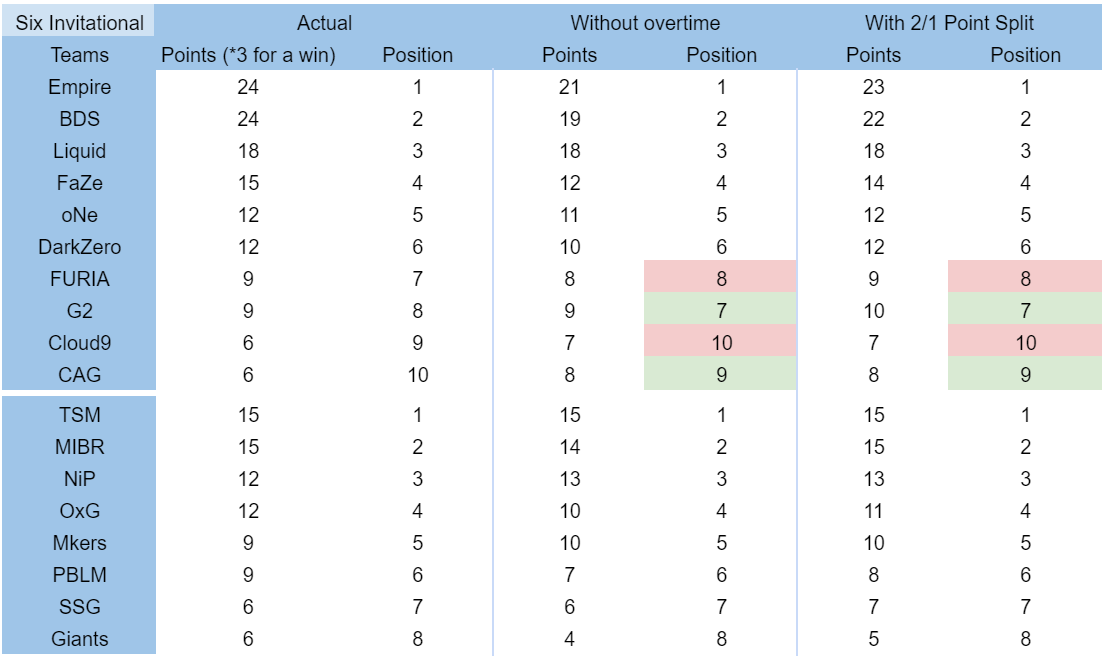 Just above them, a similar story with G2 would have put them above FURIA in seventh, setting up the first-round knock-out matches of DZ vs G2 and Parabellum vs FURIA.

So Who Came Out on Top & Bottom?

Once again, these rules don't help certain teams in particular. But, a possible third-place finish in the EUL and a chance to avoid an exit to a CL team during SI means that the 2020 rules certainly would have improved G2 Esports' last three months.

On the other side of the spectrum, Soniqs being able to earn three 8-7 victories is truly a remarkable feat that put them into second, which clearly would not have been possible if the games ended at 6-6 as we saw last year.

The biggest takeaway, however, is that  the rule change only impacted a handful of teams in general -- and likely less than predicted -- while even fewer would have missed out on a tournament due to the changes.

Meanwhile, three regional leagues and one SI group were not affected at all.

Tomorrow, Stage 2 kicks off with the NA League, which will continue with these overtime rules as this much fairer system increasingly becomes the norm worldwide. Keep track of this tournament here at SiegeGG with full news, stats, and video coverage of all the games.