The past weekend saw the end of Stage 1 for the APAC region as well, with South taking top honours over North.

The long-awaited APAC Playoffs and Stage Championship this weekend marked the end of Stage 1 for the APAC region, featuring APAC North, APAC South, and South Asian teams in the same tournament only for the second time.

The first had been the Six Invitational 2021 APAC Qualifier, but had lacked top opposition, with Cloud9, Giants Gaming, and Wildcard Gaming already qualified for the world championships.

Ironically, the two failed to qualify for the APAC Playoffs after poor performances in APAC South this stage. 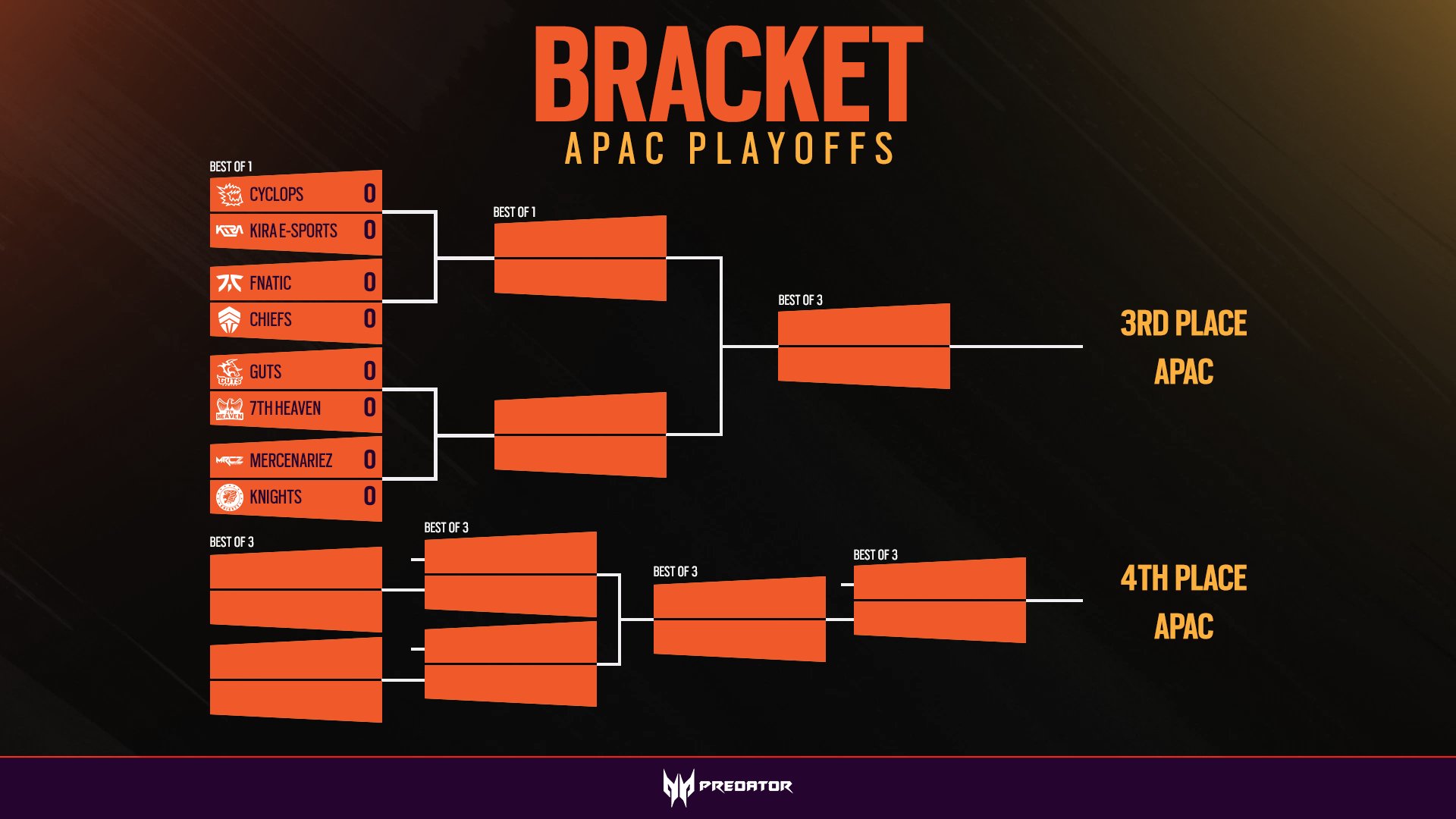 Read on to find out how the Thai Elevate squad proved its superiority over the entire region and how Pittsburgh Knights scythed their way through the Playoffs.

After having finished at the top of APAC South, Elevate took on their APAC North counterparts Cloud9, who had finished their regular season without a loss, unlike Elevate.

The Best-of-Three started off on Oregon, with Cloud9 seeming unstoppable at the beginning, leading 3-1. Elevate, however, just needed some time to get into the game and put an incredible five rounds on the board in a row, surging to match point. While Cloud9 would deny it for one round, the loss seemed inevitable at that point and Elevate took the first map 7-4.

The second map of Kafe started off more even-sided, though, despite Cloud9 being on the preferred defensive side. Both teams semed neck-and-neck, as Elevate managed to force a 3-3 first half. And just like on Oregon, this second half proceeded with three rounds in a row for Elevate, a single round delay, and a 7-4 win for Elevate. 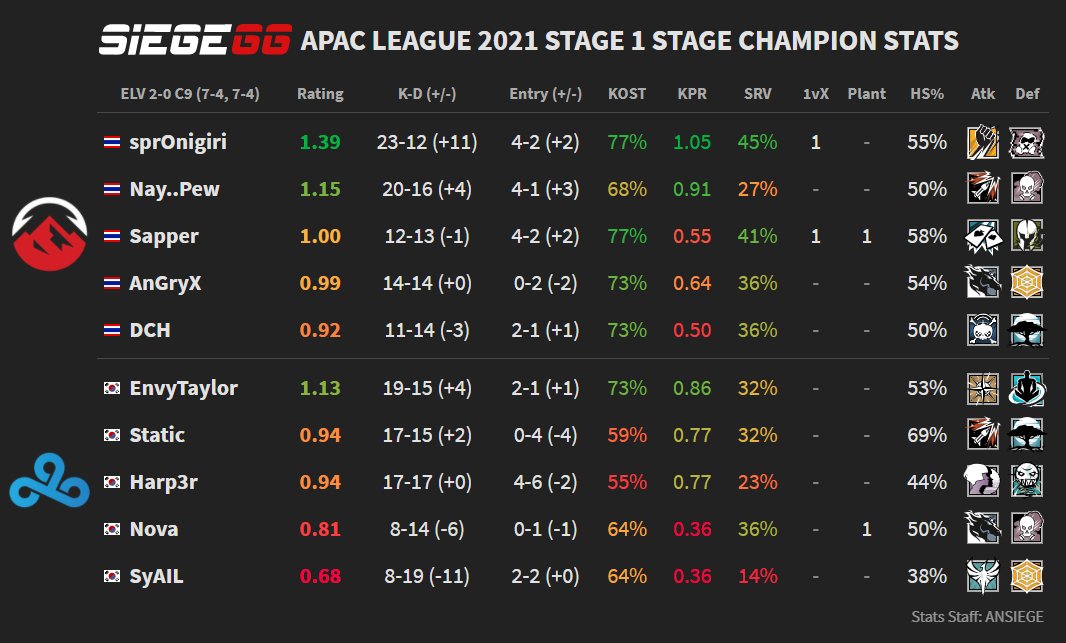 The swift 2-0 nature of the win shocked viewers and casters alike and also marked the first time a Thai team had been on top in APAC and the second time a Southeast Asian team had been APAC Champions.

However, Cloud9 will now head to the Six Invitational 2021, while Elevate will get a small break before the start of Stage 2.

Started from the Bottom, Now They're Here

Over in the APAC Playoffs, set to decide the third to 10th-placed teams for Stage 1, it was APAC South's Knights that would follow in the APAC South league leaders' footsteps.

Playing against South Asian opposition for the first time, the Knights would need all 12 rounds in regular time to win the Best-of-One (Bo1), off-stream quarter-final, but would then proceed to demolish the somewhat more familiar GUTS Gaming 7-1 in the semi-finals.

As such, a mere two Bo1s later, they were in the Upper Bracket Final against a Fnatic squad that had struggled to beat The Chiefs (8-7), but had also swept past their semi-final opposition of KIRA esports.

The Upper Bracket Final started off poorly for the Knights, as Broden "Juicy" Dean found himself unavailable for the first map. As such, team coach Jed "Pikniq" Dixon had to step in.

However, it hardly seemed to make a difference on the first map of Coastline. The game started off with an incredible post-plant 1v3 from Mark "Dino" Abboud, completing a quad-kill, which set the tone. The Knights would sweep to an incredible 5-1 lead, and while Fnatic would try strike back on their own attack in the second half, it would be an easy 7-3 map win for the Knights.

While Juicy would come back for the second map, fans were joking that he was unnecessary after the dominant first map from Knights. However, Juicy would prove himself more than useful on Villa, securing a triple-kill to flip Round 5 on its head and give his team a 3-2 lead.

A 4-2 lead at the half would soon become 6-2, and while Fnatic would try make a comeback happen with two defensive victories, the Knights would shut them out, taking the map 7-4 and the series 2-0. 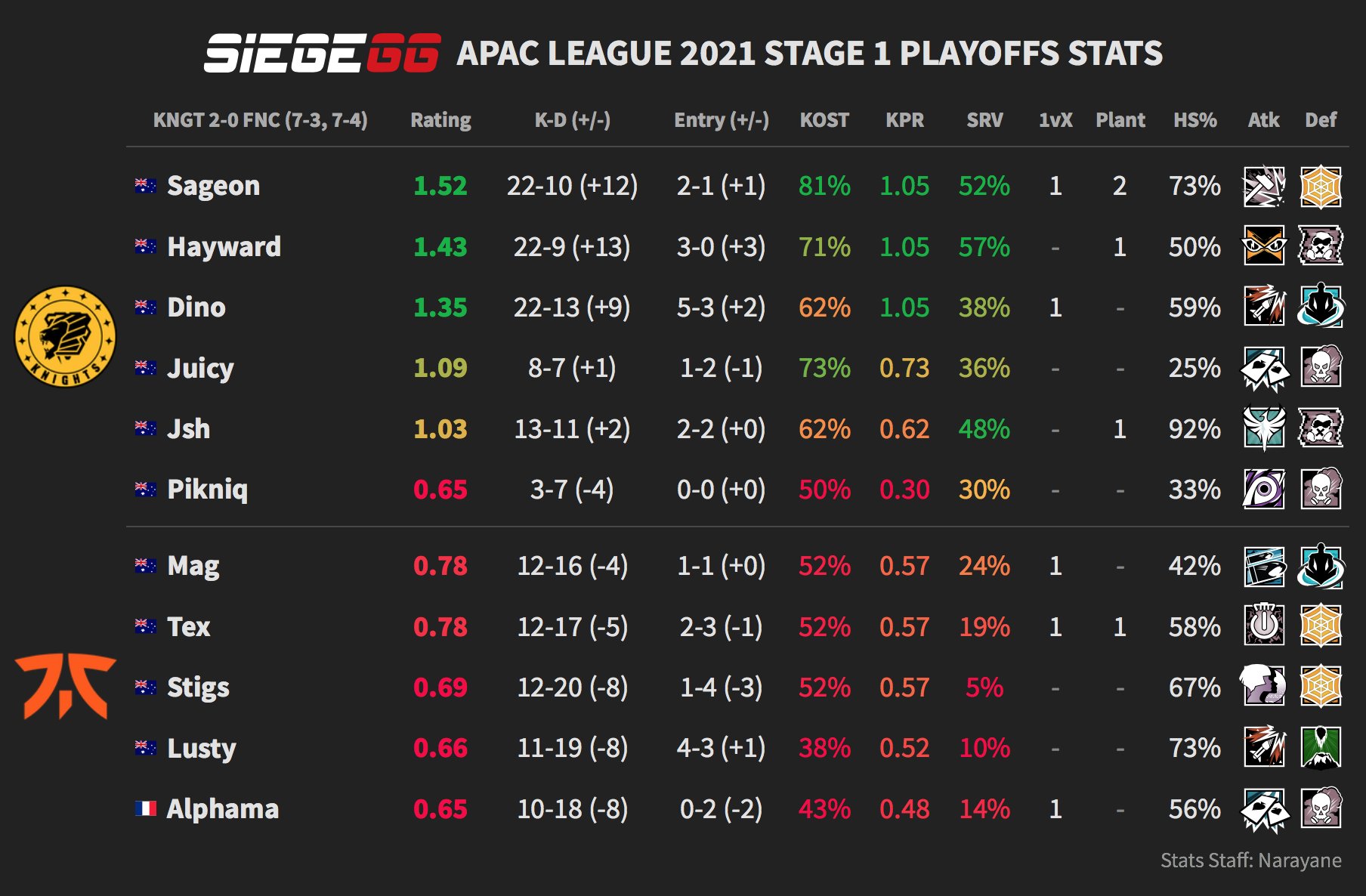 As such, the team that had been sixth in Season 11 of the ANZ Pro League would place third in Stage 1 of the 2021 APAC North Division, marking a long but rewarding journey towards the top. APAC South would also mark another victory over North, perhaps indicating a shift in the power structure for the overall region.

The Playoffs would also see an upset victory for the South Asian team of KIRA esports, who took down Six Invitational-bound Cyclops Athlete Gaming 8-7 on Chalet, while Gatorada would pull off perhaps the biggest-brain play seen so far this year.

Now, Cloud9 will join Cyclops Athlete Gaming, Giants Gaming, and Wildcard Gaming at the Six Invitational, while the rest of APAC will take a break until going at it all again in Stage 2.