Ahead of their SI appearance next month the Parabellum organisation has been hit by two major scandals in the space of a week.

Last January, the reigning Canadian Division champions of Altiora stunned North America by winning the Six Invitational qualifiers to become the first-ever Canadian team to qualify for the major event.

Following this, they were hit by a number of controversies, with the organisation initially announcing the players were to be dropped, before leaving R6 entirely, which meant that the players kept their SI 2021 spot under their new organization; Parabellum Esports.

In the time since then, the team has been active playing in North America's Challenger League.  However, the past week has had two major unconnected controversies hit the team, concerning their former coach and a now-suspended player. 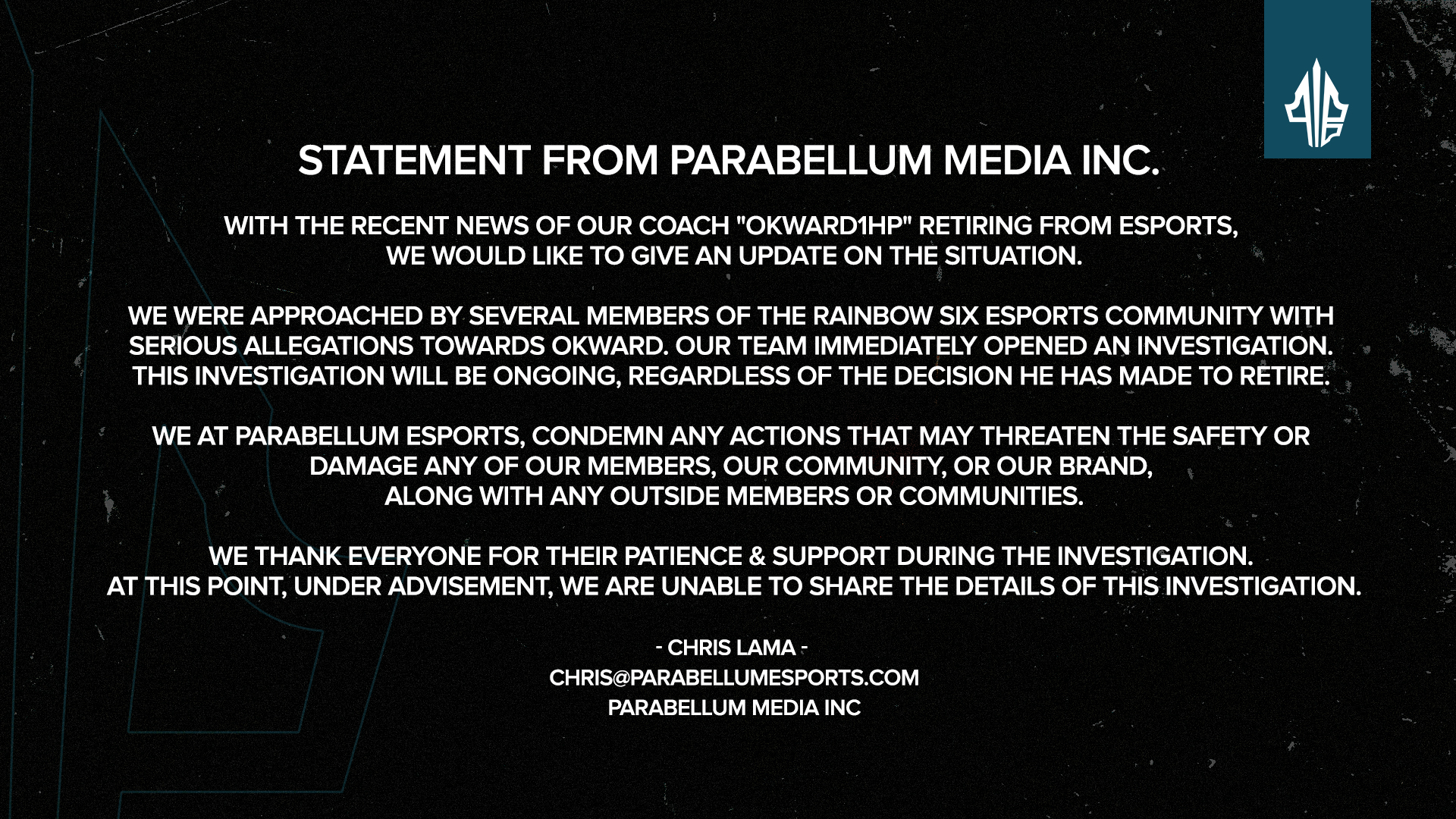 After joining the roster in December, the team's coach, Matthew "Okward1HP" Smedley, was suspended on April 13th and left the team the following day after an ongoing investigation was opened by the organisation concerning unspecified "serious allegations".

His exit from the team came just as the exact accusations became clear, which involved a conversation between him and a 17-year-old, in which he apparently lied about his age and made "inappropriate comments" to the minor.

With him out of the roster, Parabellum has since advertised for his replacement for both their ongoing Challenger League campaign and the Six Invitational. However, just seven days later, the team was hit with another controversy.

The player of Loïc "Luiz" Langlais only joined the team in March, after the team had already qualified for the Six Invitational. Now, as he sits with a 0.81 SiegeGG Rating across his three NACL games, he has been served an in-game BattlEye ban, meaning that he is banned from all competitive games for one full year.

This came less than a day after a number of clips from a single Ranked game were posted online, which seem to show him cheating.

Three more clips can be found here, here, and here.

These clips were followed with Luiz admitting it was him playing on the account at that time (confirming that his account wasn't stolen) and claiming it was just luck; claims that seemingly the entire NA community has called out as false.

With the ban, Luiz finally admitted to cheating in the clip above in a since-deleted Twitlonger.

With it, Luiz has effectively thrown away an appearance at the Six Invitational, a dream for aspiring pro players in the R6 community, due to alleged curiosity about a new game exploit.

Parabellum has announced that the team has suspended the player without pay and that he will not be part of the Six Invitational roster that will be revealed in the coming days.

It seems likely that either one or both of Sonar and Euphoria, formerly having been on the Invitational-qualifying Altiora roster, will be drafted in as his replacement for the Invitational, as Parabellum had stated that the two had the option to join the team for the event when having signed the roster.

As for the Challenger League, however, the team has requested direction from Ubisoft as the player will now be banned from play, likely necessitating an emergency replacement, but under the league rules.

With Luiz and Okward out of the team, Parabellum has just four members of the roster plus a manager in their main R6 team. As stated, this means they'll likely need Ubisoft to grant them a stand-in player for both the rest of the NACL stage, a request that was not granted to either SSG or Wildcard earlier in the season.

This ban also makes Luiz the first Tier-1 player to be banned explicitly for cheats since Stéphane "Shaiiko" Lebleu in 2017 with other notable bans all coming due to other breaches of the rulebook such as toxicity (Jack "Doki" Robertson), not complying with admins (Alexandre "BlaZ" Thomas), or match-fixing/throwing (Benedikt "Shermi" Rostok and Hibiki "XQQ" Motoyama).

Finally, for the Parabellum team itself, this mars what had been a popular underdog story and a major victory for the Canadian scene following the dissolution of the Canadian Division. The core three players that won the SI Qualifiers -- Spiritz, P3NGU1N, and Eskaa -- will be hoping to still attend the event after yet another controversy has got in their way.

Parabellum's next game will be against Dgeneration this coming Saturday, as they have three NACL games to come before the Six Invitational starts on May 11th.