Elite Six Cup Preview: FaZe in Group A, Group B the 'Group of Death'

After the conclusion of the Brasileirão’s Stage 1 we now know the ten teams that will compete at the Elite Six Cup.

The Elite Six Cup (ESC) -- known in Brazil as Copa Elite Six -- is finally a reality. This is also the second cross-region tournament in LATAM where  Brazilian, Mexican, and South American teams will be playing together on the same server.

A total of 10 teams will be playing this week for a chance to win Six Invitational points and a part of the LATAM prize pool.

The draw that decided the groups was carried out right after the conclusion of the last game-day in the Brasileirão. 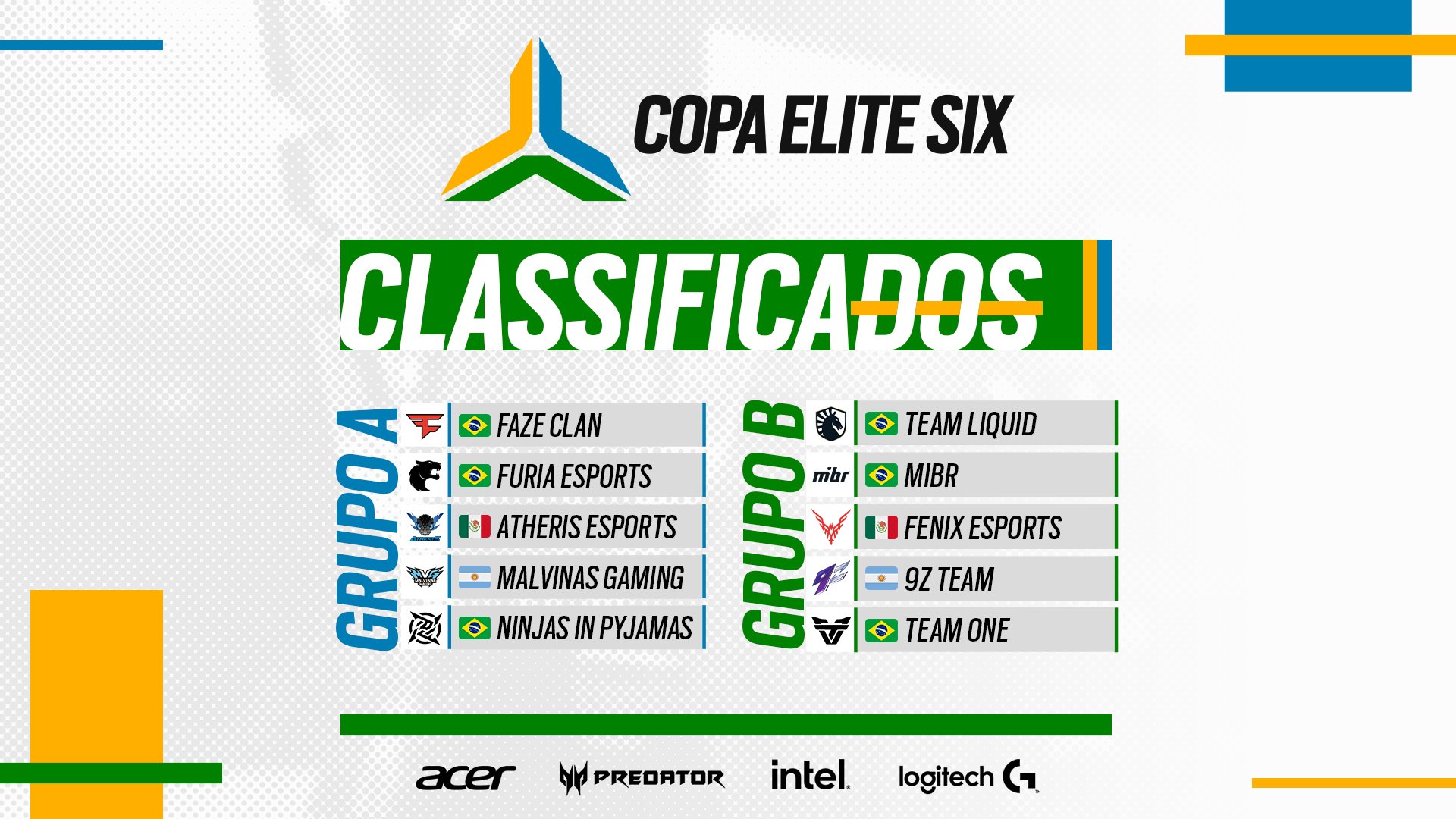 The groups will follow a single round-robin system, where the top team from each group will directly advance to the semi-finals, while the second and third placed teams will have to play a quarter-final game first.

As we previously mentioned, the Elite Six Cup offers its participants a great quantity of money as well as Six Invitational (SI) Points as follows: 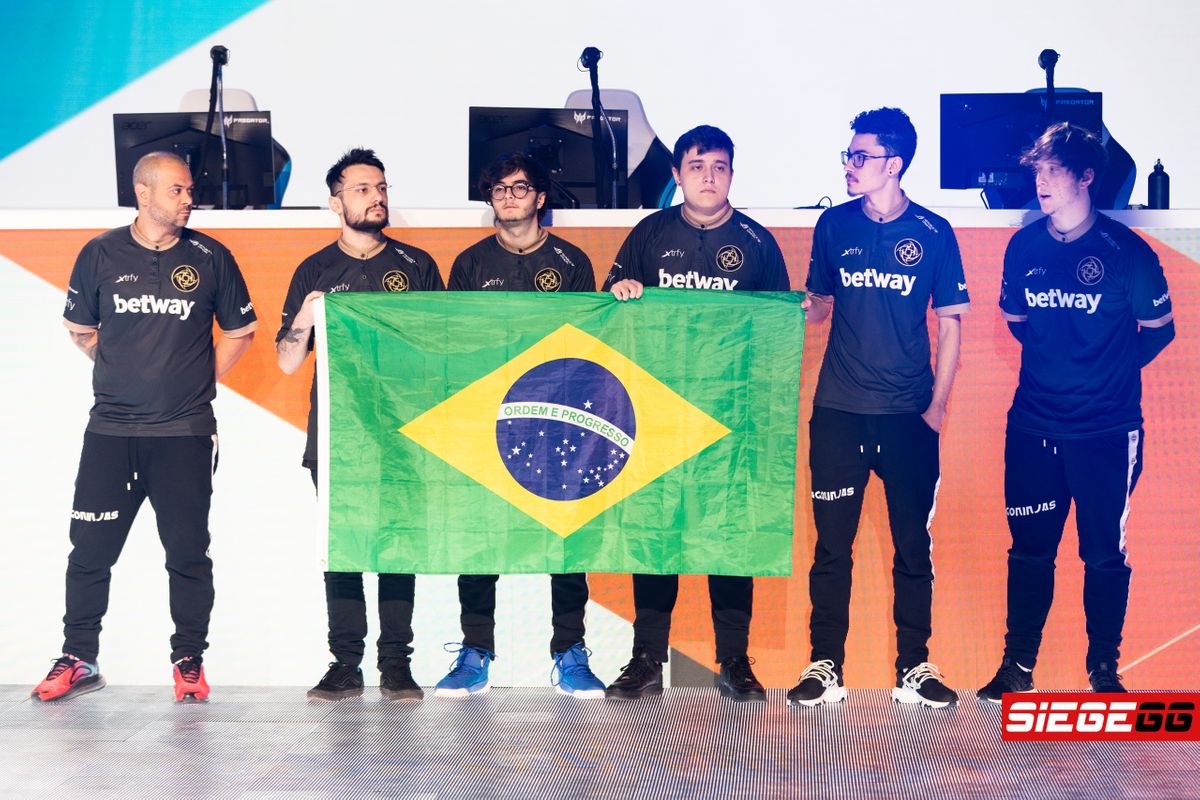 The ten teams competing include six from the Brasileirão and two from the Mexicano and Sudamericano each.

After finishing in joint first place with 20 points, the tie-breaker between both FaZe Clan and Team Liquid came from their head-to-head game, which ended 8-7 in favour of the former. FaZe’s only loss came unexpectedly as they fell against INTZ, a roster which then had a record of 0 wins and 6 losses and had been playing with a stand-in.

One just needs to have a quick glance at the Brasileirão stats to note Team Liquid’s power over the region, as Luccas “Paluh” Molina and André “nesk” Oliveira ended the stage as the two highest rated players in the region.

Then, we have MIBR. After conceding two losses in the first week, the roster only failed once more after. This roster comes in with strong form, as it has won three of its last four league games, all of them by 7-1 margins, which include a brilliant performance against the current Brasileirão champions of Liquid.

Closely behind them we have FURIA Esports, which looks like a completely different roster now compared to last year. This organization went from playing the 2020 Brasileirão relegation match to qualifying for the 2021 Six Invitational in just a month and has completely transformed itself.

The opposite could be said for Ninjas in Pyjamas, however. The current Six Invitational finalists went from dominating the region to end the season as a mid-table team. Nevertheless, this team cannot be underestimated, as it beat the Stage 1 champions of FaZe and two other Elite Six Cup oppositions, which include Team oNe and MIBR.

In sixth position -- the last to offer an Elite Six Cup invitation -- finished  Team oNe. After a strong start to the league where we saw them playing three games to overtime within their first five appearances in the Brasileirão, three losses in their last four matches made them fall short of the leaders' pace.

For more information on the teams from the Campeonato Mexicano, read this article.

The progress made in Mexico and South America is real and Brazilian teams have already been victim as Estral Esports took down INTZ and almost did the same to FURIA at the LATAM SI Qualifiers.

After the Mexican organisation was permanently banned from all Rainbow Six competition, however, their players had to move on. And here we have the results.

First we have Fenix Esports. The Mexican Stage 1 champions took the crown after winning against Atheris in their very first game of the season. The match eventually decided the stage, as none of the five other rosters that completed the Mexicano were able to take away a single point from the two leaders.

Fenix features two ex-Estral members, Daniel “P1XIE” Castelo and Arturo “XigmaZ” Vizcarra, and also the highest-rated player of the stage, Saúl “Morphed” Torres. Overall, this roster seems solid enough to put any Brazilian team under pressure, as there is a good balance between skill and experience.

But, if we talk of experience, Atheris wins by a fair margin. The Snakes roster is not so unknown for the Brazilian viewership as the Mexican’s have two former MIBR players in Daniel “Novys” Novy and Lucca “MKing” Cesana Coser.

These two players competed at some of the biggest international events, which include Pro League Finals, Six Majors and Six Invitational appearances. As they ended up as two of the four highest-rated players in Mexico, the two Brazlians are evidently pivotal for Atheris, both in terms of quality, experience, and adaptation to the Brazilian game-style.

For more information on the teams from the Campeonato Mexicano, read this article.

To conclude our insight into the Elite Six Cup, we have the two representatives from South America. Similar to Mexico, the leader did not lose to any side in the league, while the second place team's only loss came against the stage champions.

In first place we have 9z Team, the current leaders of the Sudamericano. They won all of their seven league games, as they smashed their only two pursuers in the league, Malvinas and Furious Gaming. With two of the best three players in the region in Bautista “AtlaS” Bayugar and Federico “Pechito” Miller, 9z is ready to take the fight to their Brazilian and Mexican counterparts.

Then we have Malvinas Gaming. The only-full Argentinian squad in the competition left a great impression at the last SI LATAM Qualifiers, as they finished in the competition’s Top 4. Now, with some of the best players in the region, including the highest-rated player in the competition, Leandro “Meight” Duarte, Malvinas will try to push on and leapfrog 9z team in the ESC.

The Elite Six Cup is a very long-awaited tournament in the LATAM region, being the first time the top teams in each region will be playing against each other on equal latency (ping), with the Six Invitational qualifiers having missed all the top Brazilian teams due to their qualification prior.

This group includes two of the most-known organizations in the entire Siege scene, FaZe Clan and Ninjas in Pyjamas. These two are the clear favorites to make it through, thbough FURIA is another fierce candidate.

It is difficult to predict if any of the Mexican or South American sides could make it to the next stage, but Atheris’ players of Novys and MKing could be the key to an impressive performance by the Mexican representatives.

Meanwhile, Malvinas Gaming cannot be underestimated, as they were the underdogs of the LATAM SI Qualifiers. Despite not being able to win against any of the Brazilian opposition, the Argentinians made it to the Top 4.

Some matches to watch out for will be:

Group B is by far the stronger group, however, and anything could happen here. Team Liquid’s roster is the clear candidate to make it directly to the semi-finals. However, the reality is that three teams in this group ended as stage winners, as Fenix won in Mexico, 9z won in South America and Liquid finished in joint-first place with FaZe Clan.

This is, of course, not mentioning that the remaining two teams of MIBR and Team oNe can certainly spring their own surprises.

These two teams are the faces of the only strong rivalry in the group, as after four of MIBR’s players signed for FaZe Clan, the organization signed the entire Team oNe roster. If this alone was not enough, their only match this season ended in a 7-5 win for the current Team oNe side, a result that MIBR will be itching to avenge.

You can catch all the games on the Rainbow6BR Twitch account tomorrow and be sure to keep track of all of SiegeGG’s LATAM coverage on our Youtube and Twitter accounts!