With the Winter edition of the Korean Open 2020 now over, here is a complete roundup of the entirety of the Winter season from start to finish.

In a continuation of the Summer and Autumn events, the Winter version of the ₩30,000,000 (US$25,000) Korean national tournament got underway about a month ago on Boxing Day, featuring four current and recent APAC North teams in attendance alongside other domestic challengers.

This Korean Open series of nationals is the latest in a line of a few prior successful tournaments, and with another Cloud9 victory over the past weekened -- this time over the newly signed DWG KIA roster (formerly under GC Busan Spear) -- here's a complete rundown of the past month's play.

Pre-Tournament: Changes in Format and Teams

With the Winter tournament starting after the APAC North Relegations, much had already changed in the Korean scene. SCARZ had failed to keep its spot in the top-level league, having lost out to a star-studded GC Busan Spear team. As such, Minho "CrazyBoy" Choi and Seongbeom "Kanos" Lee both joined other teams, while Chanhyung "C0LDBRO" Son left as well. The remaining members stuck together, though, playing as OhHamMa.

GC Busan Spear had also permanently signed former SCARZ player Sanghoon "yass" Yoo after a trial, which included the pivotal APAC North promotion matches against SCARZ and SGA eSports, and were raring to go in a full KR Open season without having to worry about a loftier goal than just a domestic title.

Aside from that, Use Drone had disbanded and had been replaced by Korean Open Relegation winners Lunatic-hai, a team coached by former Pro League team Ageless Blue coach Seunghyeon "Roy Mikelate" Ryu.

Aside from the changes with the teams, the Korean Open format had also switched to a straight Best-of-One (Bo1) with overtime in a round-robin, from a two-group, Best-of-Three (Bo3) round-robin in the previous two Korean Open tournaments. As such, each of the eight teams would now play each other once in the regular season, unlike the intra-group regular season of before.

What's more, draws had been eliminated and the win-loss record directly dictated the finishing positions. And unlike the top two teams from each group heading to the Playoff Finals in the old format, the new format saw the top six proceed to a single-elimination bracket, with the top two teams given a first-round bye (much like the APAC Majors).

The first day of play sprang no surprises, with each of the four APAC North teams securing comfortable victories, but the competition began to heat up on the second day. FriendlyFire Clan (FFC) gave OhHamMa a worthy fight, while Talon got close to forcing overtime against Cloud9 as well.

The third day was when the surprise was truly sprung, with Cloud9 falling by a heavy 3-7 margin to OhHamMa on Coastline. Of particular note in that game were Kim "Demic" Dae-yeong, who finished with a massive 1.76 rating stemming from a 15-5 K-D split, and the 1.42-rated Cha "iLeven" Won-il.

The second week of play saw teams settle into a cadence of excitement, with the first game of the week starting off with a 15-round thriller between Talon Esports and OhHamMa. 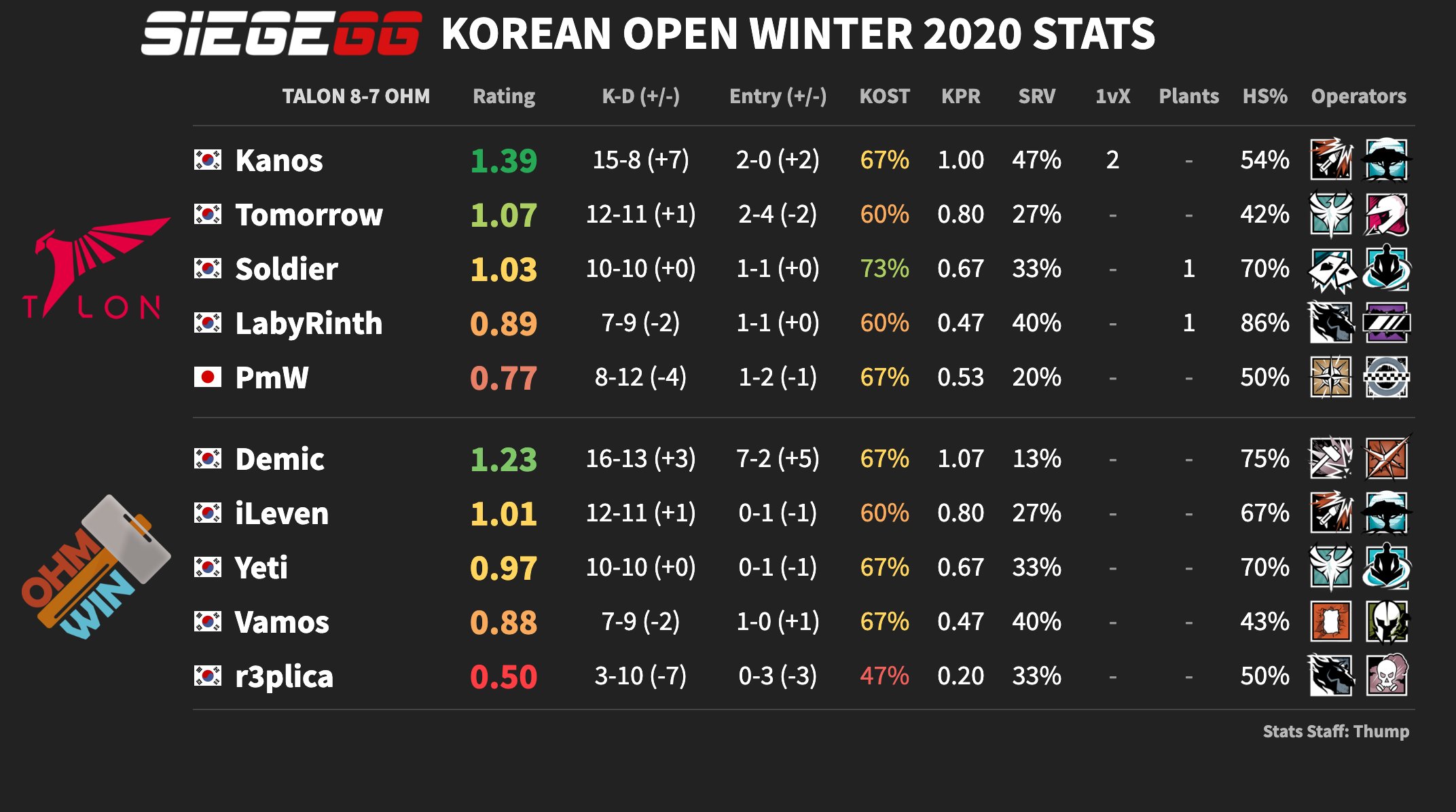 Playing on Oregon, the former Relegations survivors took on the Relegations victims, with both teams going 5-1 on their defensive halves. However, in overtime, it was Talon that came up top despite not getting to defend first and conceding match point to their opponents.

The next day, GBS delivered Cloud9's second loss in a close 7-5 on Clubhouse, while Lunatic-hai also ran OhHamMa close on Kafe. However, the sixth day brought about a loss for GBS themselves, as Talon took them to task on Coastline, while FFC hunted ineffectually for their first win amidst a 6-8 loss to Lunatic-hai.

On the final play day of the regular season, Lunatic-hai found itself safely through to the playoffs ahead of Faust, as not only did Faust lose on Day 7, but would have lost the tiebreaker to the Lunatic-hai after their 7-4 victory over Faust on Day 4.

FriendlyFire Clan, meanwhile, came close to a victory again but could not reach the finish line as Cloud9 secured another victory, but it was GC Busan Spear and Talon Esports that finished first and second, respectively, and secured the first-round playoffs byes.

With Cloud9 having finished in fourth place during the regular season, their game against SGA was necessary formality, as they swept to a 2-0 (7-0, 7-5) victory in their quarter-final. OhHamMa, meanwhile, also won their quarter-final with by a 2-0 (7-3, 7-5) margin against Lunatic-hai.

Moving onto their semi-final, Cloud9 flexed their APAC North-winning muscles, showcasing just why they would go onto win the APAC North 2020 title as they swept Talon aside 2-0 (7-3, 7-4) despite their lower-seed in the Korean Open season.

GBS, too, only took two rounds more than Cloud9 had needed to defeat their own opponents of OhHamMa, winning 2-0 (7-4, 7-5) to set up a highly anticipated grand final between the two best Korean teams. 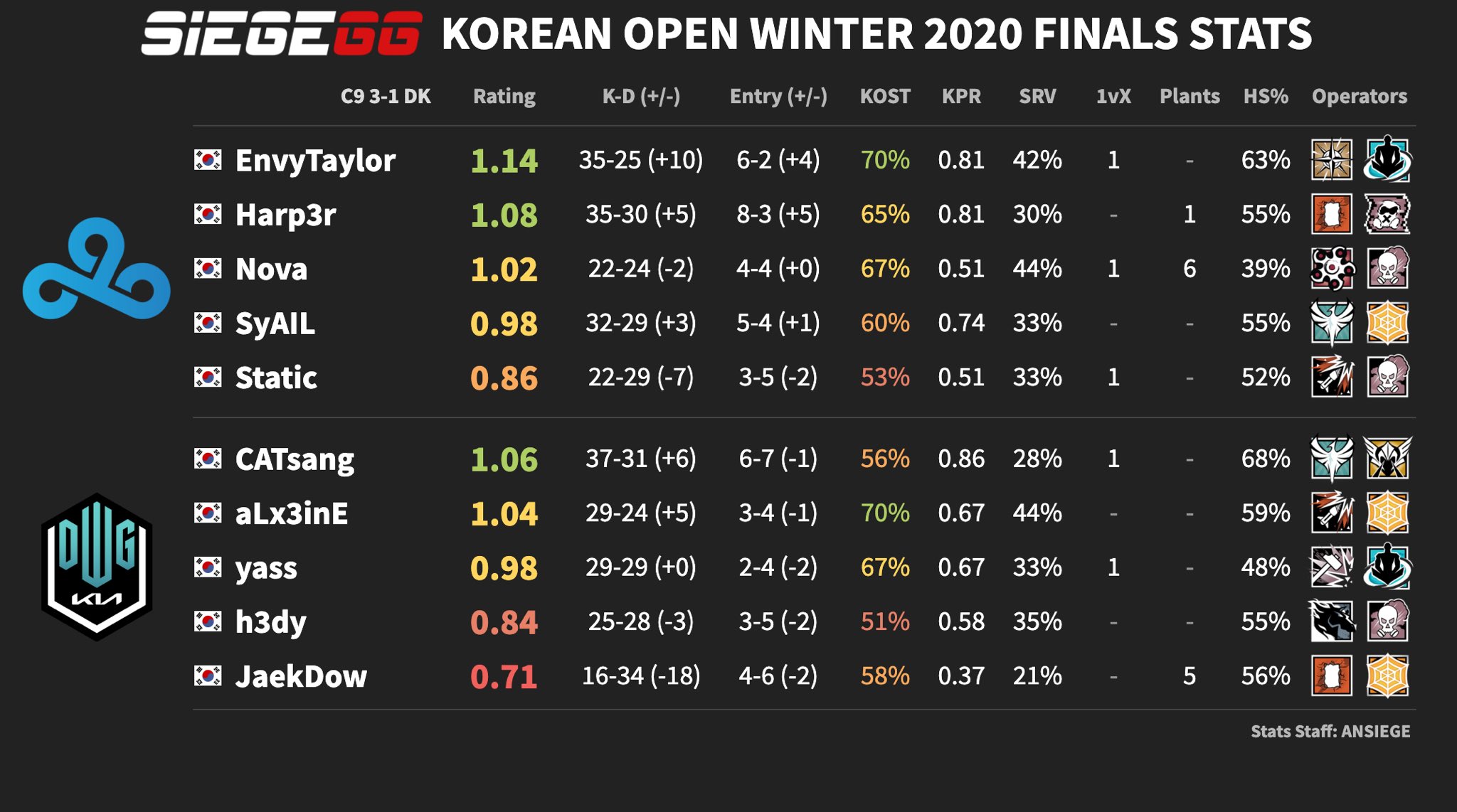 The stakes were then raised even further, as League of Legends (LoL) World Championship winning organisation DWG KIA (formerly known as DAMWON Gaming) swept in to sign all but one of the GBS players and both their coaches in one of the highest-profile entrances in the past two years.

The Grand Final, a Best-of-Five (Bo5), started off as expected, with Cloud9 narrowly taking down DWG KIA (7-5) on Consulate, but obliterated the latter on the second map of Clubhouse (7-1). Determined not to go down without a fight, DWG KIA struck back with a 7-5 victory on Oregon, but had to concede the series after a tense 1v1 on Kafe, losing that map 5-7 and the series 1-3.

Cloud9, already APAC North champions at this point, had thus added yet another domestic trophy to their stable, but the public palate for a fight for Korean supremacy had been well and truly whetted.

Now, as Cloud9 gears up for their Six Invitational 2021 appearance, the rest of Korea will cheer their compatriots on -- but will be more than ready to bring the fight to the incumbents come the start of the 2021 domestic season.