This weekend will see the €100,000 EU League Finals and Relegation battles as we crown the 2020 champions and finalise the 2021 competitors.

After six months of games in the new pro-circuit played, this weekend sees the conclusion to 2020 season in the European region.

The EU Finals and Relegations are two separate tournaments taking place over this weekend inviting the top and bottom teams by performance over this year.

The European Finals invites the top four teams in 2020 (determined by adding the points from Stages 1 and 2 together) to a single-elimination bracket with Best-of-Three (Bo3) semi-finals and a Best-of-Five (Bo5) Grand Final.

Six August Major champions BDS Esport will take on Natus Vincere in the first semi-final on the 15th of January, in what will only be the second official game for the latter since the end of the regular EUL season. Following that, the similarly out-of-official-practice G2 Esports will take on Virtus.pro on the 16th.

After winning the August Major and finishing second during the November Major, BDS are the clear favourites this weekend. Across both Stages BDS lost to just G2, Na'Vi and Rogue once each and Empire a remarkable three times. Now with Empire not competing in this tournament, it'll be good to see if they can regain their regional title going into the Six Invitational.

Next up, coming into this tournament in second place is G2 which has yet to win any regional or higher tier tournament with this core roster to date. With a second-place finish during the August Major against BDS, a good showing here is probably what the team needs if they want to attend SI 2021 as one of the tournament favourites to win back the title they lost last year.

Then, finally, we have V.p and Na'Vi who ended the 2020 regular season with the same number of points, just one ahead of both Empire and Tempra. With Na'Vi being the only one of the four not attending SI, this is a fairly different tournament for them as they'll presumably be fighting with all of their strats to end the year on a high. V.p meanwhile attended both Majors but fell short in both with two third-place finishes, something they'll want to avoid again.

The losers of the two semi-finals will then play a Bo3 third-place match on the 17th, while the winners will proceed to the Bo5 Grand Final on the same day.

At the same time, the EU Relegations will be ongoing, played between the top two teams from the 2020 Challenger League -- Cowana Gaming and MnM Gaming -- and the ninth-placed team from the 2020 EUL season -- Rogue.

Cowana and MnM will play each other in the semi-final first, on the 16th of January (after the Na'Vi vs BDS match), with the winner qualified to the 2021 EUL season. The loser, however, will get a second chance against Rogue on the 17th for the second spot in the 2021 EUL season.

These two British Challenger League teams come into the Finals from two very different playoffs as we saw Cowana sweep past two of the league favourites of PENTA and Winstrike in 2-0 results while MnM pulled off what was likely the best comeback of 2020 to take down GAMMA Gaming on round 15 of map three. With over two months to practice for this one game, we can a truly great game.

Both matches will be Bo5 affairs, meaning that the loser of the first game could end up exhausted for the second. On the flipside, Rogue will only have one final chance to defend their position after losing all their games in Stage 2 -- a stark contrast from their league-topping 6-1-2 record in Stage 1.

Both the Finals and Relegations will be cast by the usual EU League names with Easy and med1cz likely observing.

Finals Around the World

The EU Finals will likely end the 2020 Season with just the likely canceled US Division Finals left uncompleted. Seven other Finals took place around the world, three in LATAM, three in APAC, and one in Canada resulting in the following results: 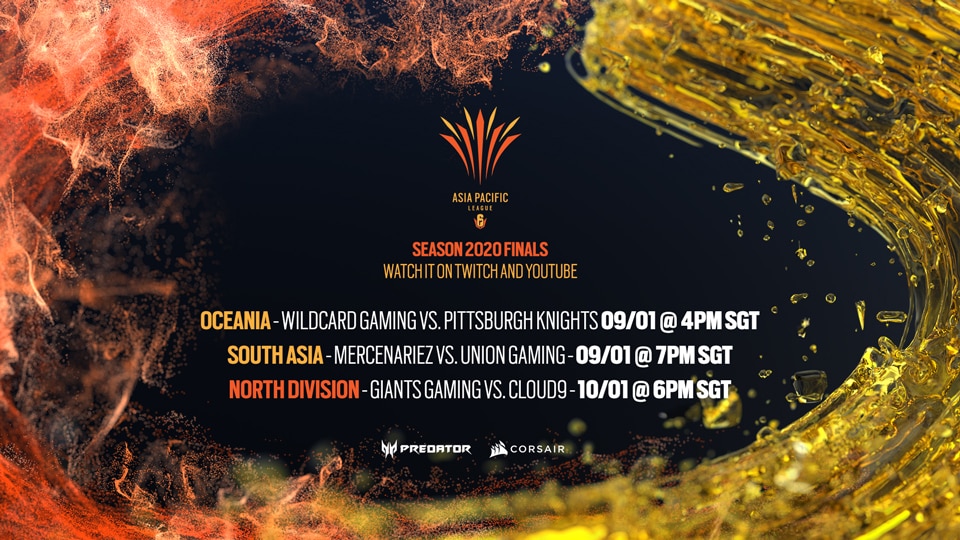 Last weekend the following teams took the three Regional titles worth a total of $50,000:

In APAC, the COVID-19 pandemic ensured that what would be a meeting of all three subregions into one prestigious event turned into three subregional ones. Nevertheless, the action was just as exciting.

In the $25,000 APAC North event, Cloud9 claimed top honours as the best APAC North team over Giants Gaming, while the Pittsburgh Knights stunned the heavyweight favourites of Wildcard Gaming in the $15,000 Oceanic event.

Finally, the $10,000 South Asian finals saw ex-MercenarieZ continue their winning ways from the Six November Major with another victory over Union Gaming.

The LATAM Finals finished last month, with the following teams being crowned their sub-regional 2020 champions and winning the top share of the $165,000 prize pool:

Unlike APAC, the LATAM Finals were always planned to be three separate events with COVID, leading to the Mexican and South American Finals being played online rather than on LAN. The Brazilian Finals, however, did take place in a LAN environment in São Paulo.

After Coscu Army dominated the SA scene this year, their loss to Malvinas was very unexpected, while MIBR won their first title to date in a shock 3-0 sweep over Team Liquid in the grand final.

In NA the Finals were split into two separate events; Canada and the US. Both of these were meant to be on LAN in a USN-style event in Las Vegas, but the $50,000 Canadian Finals were shifted to an online format.

They saw Altiora takedown Mirage 3-0 to take the title and the SI Closed Qualifier invite -- a qualifier they later won -- with the relegations taking place just beforehand.

The US Finals were meant to take place in December, but have now been announced to be played on the 22nd and 23rd of January. They will still be held offline on LAN, at the HyperX Esports Arena in Las Vegas, but will be a closed-door event.

While offline, safety will be of utmost importance, with the players quarantined for two weeks prior and COVID-19 testing before and after. Face masks will be mandatory during the event, as will be daily temperature checks, social distancing, and constant sanitation of surfaces. Each team will also have a private room for select staff.

These US Division Finals will include Spacestation Gaming, DarkZero Esports, TSM, and Oxygen Esports and will be worth $150,000. There will, however, be no relegation event after the announcement that the Canadian Division will be absorbed into the US Division to create a single North American League.

Keep an eye out here at SiegeGG for full coverage of these games over the weekend.