Check out the huge number of changes just revealed as part of the upcoming free update, Operation Neon Dawn.

A new operator, a rework of the Skyscraper map, and three operator changes will come to Rainbow Six in the coming weeks as part of the free Operation Neon Dawn update. Here's everything that was announced earlier.

Starting with Apha “Aruni” Tawanroong, the new two-speed, two-armor Thai defender operating as a part of the fictional NIGHTHAVEN Private Military Company brings the unique Surya Gate gadget, which is effectively a Kaplan trap in the form of a laser grid.

The gadget, which is thrown like a Grzmot Mine, can attach to any surface and creates a laser grid below it. This grid deals 30% damage to any attackers and destroys any attacker gadgets which hit it. However, after the lasers are hit, it is deactivated and discharged, and cannot block any further utility. In order to reactivate it, a defender must wait for a cooldown and then shoot the gadget itself while the attackers can only destroy the gadget with hard destruction such as Grenades or Ash and Zofia charges.

In practice, this means that when faced with the grid, an attacker can simply throw or shoot any utility such as a flashbang or Zofia Lifeline into the grid to deactivate it and then pass through it without an issue, making it much less utility-intensive to deal with than a Volcán Shield or Banshee.

For the defense, this can be used to cover key entryways, hatches, or most importantly, rotate holes. The grid deactivates when a defender nears (and reactivates after they leave) and Aruni has three of them.

Due to its ease of deactivation, this would act in many ways like a Kapkan trap, as the usage of a throwable acts as a sound prompt and the operator is most deadly when the time is low and attackers are forced to take the damage hit. Finally, the grid does a good job hiding Kapkan traps themselves, making an Aruni-Kapkan combo very strong and an instant-kill.

Concerning loadout, Aruni comes with Mozzie's P10 RONI submachine gun and Dokkaebi's MK14 EBR marksman rifle — the first DMR available to the defenders — as primary weapon options. To go with this, she has the lone secondary of Capitao's PRB92 handgun, and the choice between Barbed Wire and a Proximity Alarm as a secondary gadget.

Finally, like Zero, Aruni comes with a unique melee attack, in which she effectively punches with her bionic arm rather than using a knife. Unlike Zero, this does have a gameplay advantage as her melees make Bailiff-sized holes in soft walls meaning she can punch open rotate holes. This feature is, however, being tested on the Test Server and is not a confirmed part of the operator should the feedback be negative.

While much of the pre-announcement backlash around the operator complained about her indestructible gadget or her being "Jager, Kapkan, and Castle all in one", this seems to be much less of an issue than stated. While it is still a utility burn for the attackers, the fact it can be deactivated by a single flashbang is likely to save attackers time and utility, compared to dealing with operators such as Goyo or Melusi (who Aruni is most likely to replace in lineups) who require hard destruction.

For the defenders, the gadget will be most useful to slow down attacks and to halt the infamous Ash-Nøkk-Zofia rushes seen in all elos of Quick Match and Ranked games. Now, Ash will need to throw or shoot utility to disable the grid, which gives away her push or take the 60% damage hit which softens her up for defenders.

Her ability to create unlimited rotation holes via her melee attack is likely to be a disliked add-on feature after many people criticized Tachanka's ability to withstand to be unnecessary and unneeded. The fact the melees are being tested on the Test Server and not confirmed, however, shows that Ubisoft anticipates resistance to this feature and is willing to listen to the community around it.

In an attempt to respond to many professional player's meta concerns, Ubisoft has made a major change to Jäger's Magpie gadget, as it now needs a 10-second cooldown between uses while having infinite charges (much like a Twitch drone).

This means less time and utility will be needed to destroy a piece of utility or force a player away from a position. We regularly see Magpie ADSs in position to defend gadgets such as Goyo shields or Maestros, meaning that only a single Ash or Zofia stun is now needed to burn the ADS before the attacker can hit the gadget or operator playing alongside it.

For defenders, this means to cover the same key areas, multiple ADSs or assist from a Wamai will be needed, while more aggressive defensive positions such as Oregon's Bunker or Consulate's Yellow stairs will be much harder to hold off.

This should increase the speed of rounds and hand utility back to attackers, something pros have been asking for for quite some time.

Another major change can be seen with Echo's YOKAI drone, which will no longer remain invisible while stuck to ceilings. 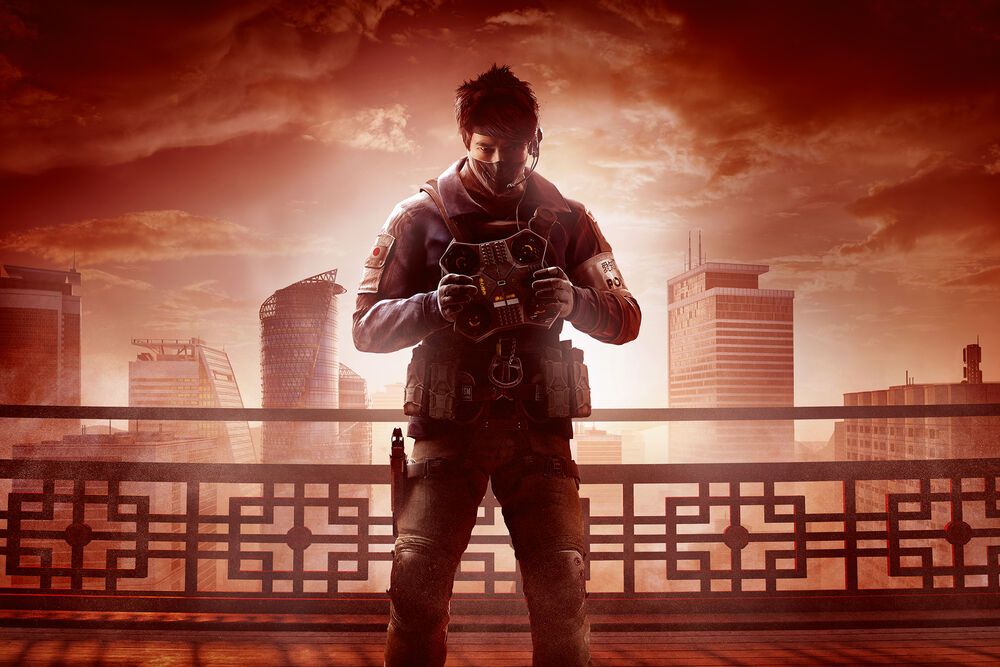 Simply put, Echo's pick rate should significantly drop as he becomes much easier to deal with and defenders are forced to find more interesting strategies to bring him into play.

The gadgets being visible means it cannot act as a hidden eye as well as they could before and likely would be spotted after a single ultrasonic burst, minimising its ability to deny plants. Both of these factors help eliminate its impact as a cause of the "20-second meta" as, just like Jäger, he can now be dealt with much quicker and without the need for an IQ.

Completing Ubisoft's rework of the Japanese map and operators four years on, Hibana will see a change to her X-KAIROS Launcher which can now be configured to shoot two, four, or six pellets at a time out of the 18, rather than a set count of six each time. 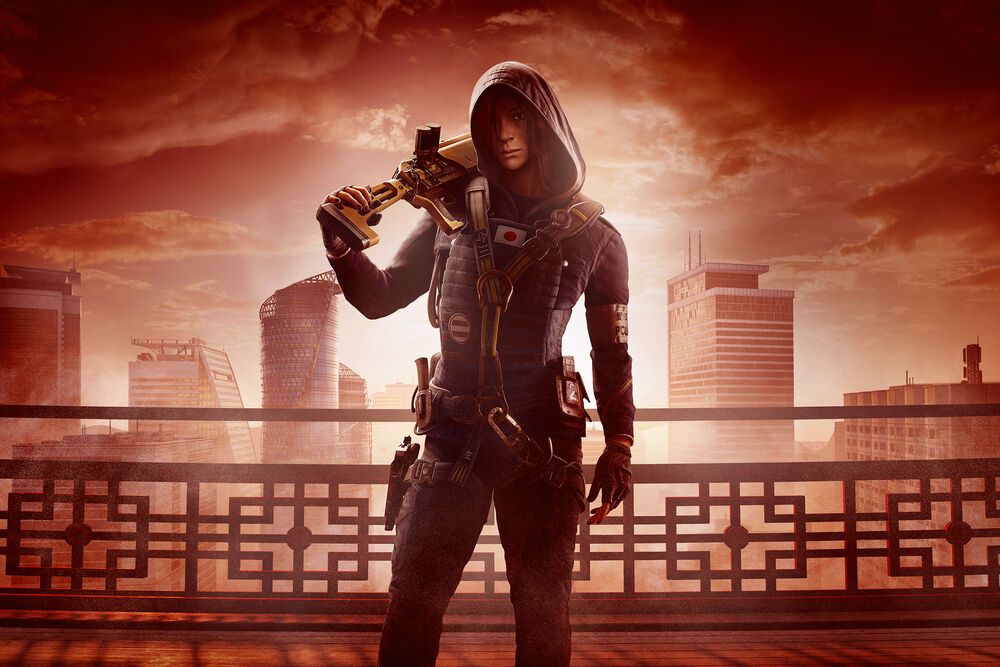 The biggest impact of this is that it will allow Hibana to save two pellets when opening up a hatch (as a hatch needs just four pellets rather than six), allows her to open up nine smaller holes (in batches of two pellets each), and could make impact tricking virtually impossible to pull off, as a Hibana can waste up to seven impact grenades.

As Hibana can now open up a wall two pellets at a time, if a defender was to use both Impact Grenades to successfully "impact trick", then Hibana has only lost four pellets rather than 12. Similarly, as just four out of 18 pellets are needed to make a couching sized entry, Bandit or Kaid would need to "Bandit trick" up to eight times rather than three, before Hibana runs out of pellets to shoot.

On paper this small change should make Hibana a much more confident pick despite the hard breach role becoming increasingly crowded. She's gone from a weaker Ace that's better for hatches, to an operator with significantly more options than any other hard breacher. With so many shots, she even works as a very strong answer to Aruni ,as she has nine X-KAIROS shots and two stun grenades available to disable her gadget.

While not as direct as the last two, a buff to a key attacker and a nerf to wall denial will absolutely help pull away from the 20-second meta and increase the speed of rounds, if the new Hibana is adopted at the top tiers.

Next up, we have the "new" map in Skyscraper's rework, four years after the map initially released and 18 months since it was removed from the competitive map pool.

To break that video down, the rework has kept almost all the map intact, with most rooms seeing just a visual update, while the larger open areas have seemingly been split up into smaller less exposed rooms. The lone exceptions are the bathroom and bedroom site, which has been opened up, and the Drum Room, which has more than doubled in size. 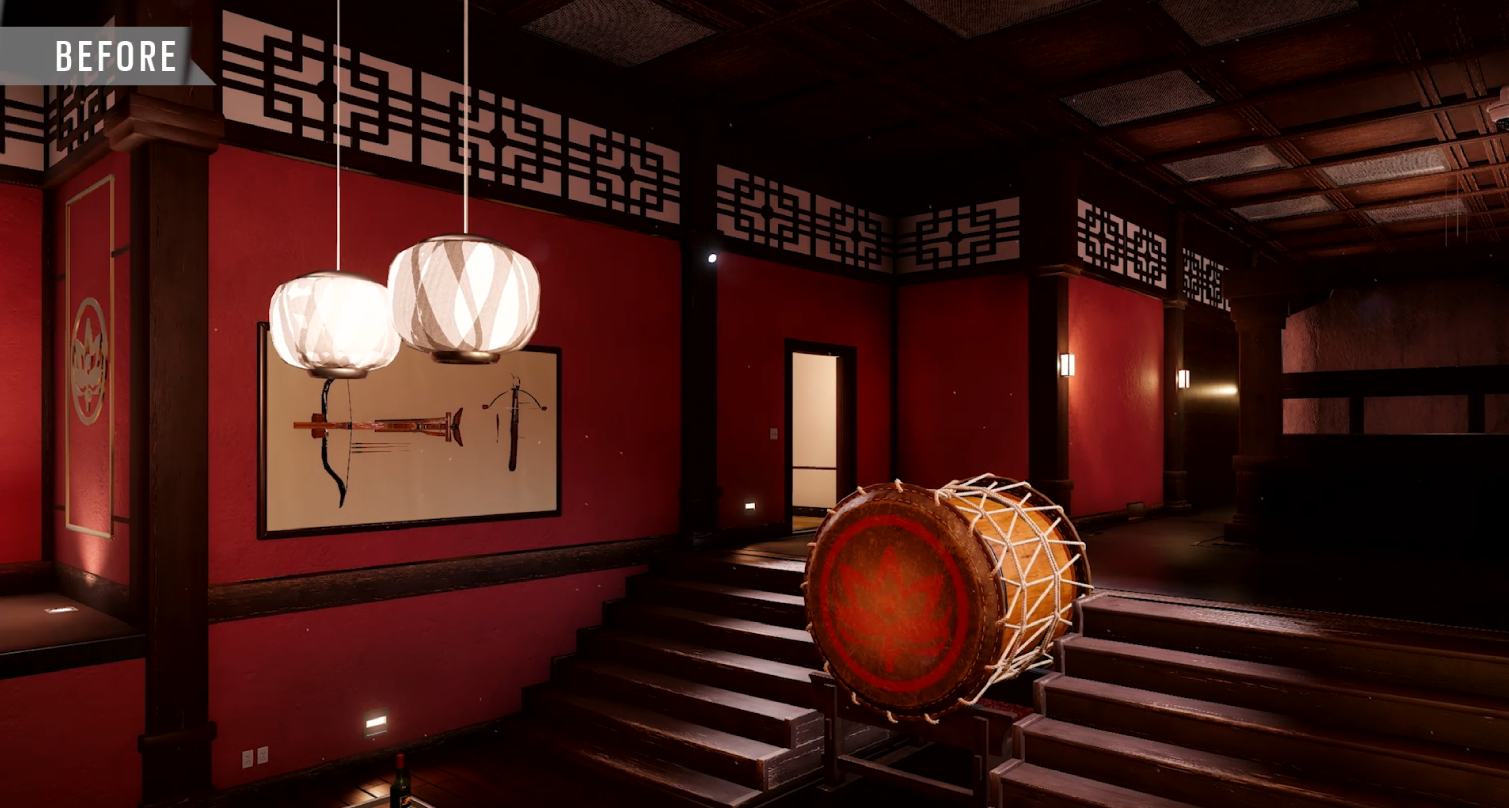 More notably, the widely criticized outside balconies, which surrounded the map and made entries into sites very linear and runouts much easier, have been removed and replaced by a solid wall with non-destructible "fake" windows. 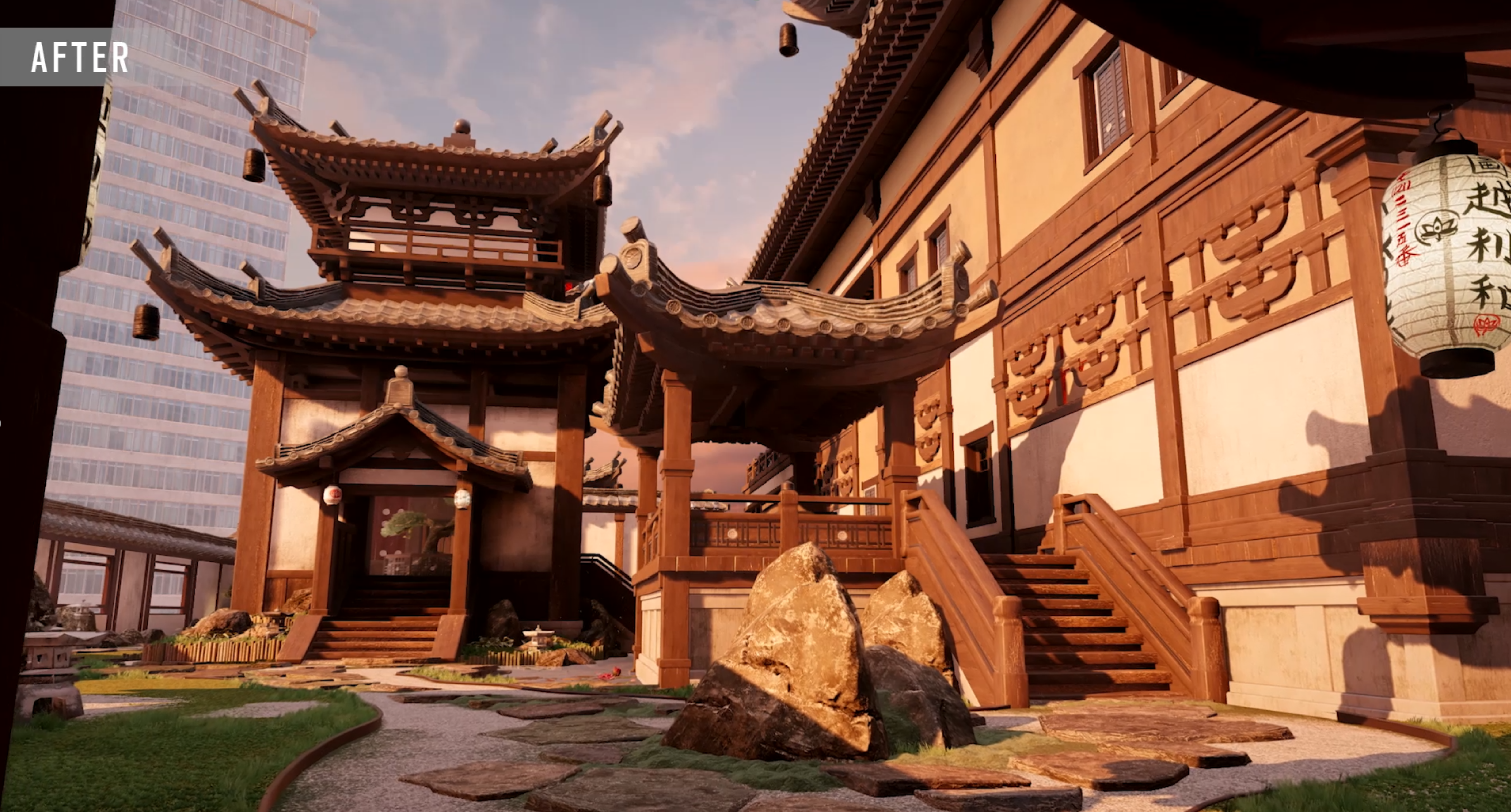 Finally, the outside Dragon Statue area has been made into a room connecting the two sides of the map upstairs more substantially than the single doorway that existed beforehand.

This amounts to more of a map update akin to Kafe and Clubhouse, rather than a complete rework we've seen in maps such as Chalet or Hereford Base. This focus on fixing the competitive issues rather than taking a complete sledgehammer to the design will be welcomed by many after the less than favorable response Hereford Base received compared to the successes of Kafe and Clubhouse. 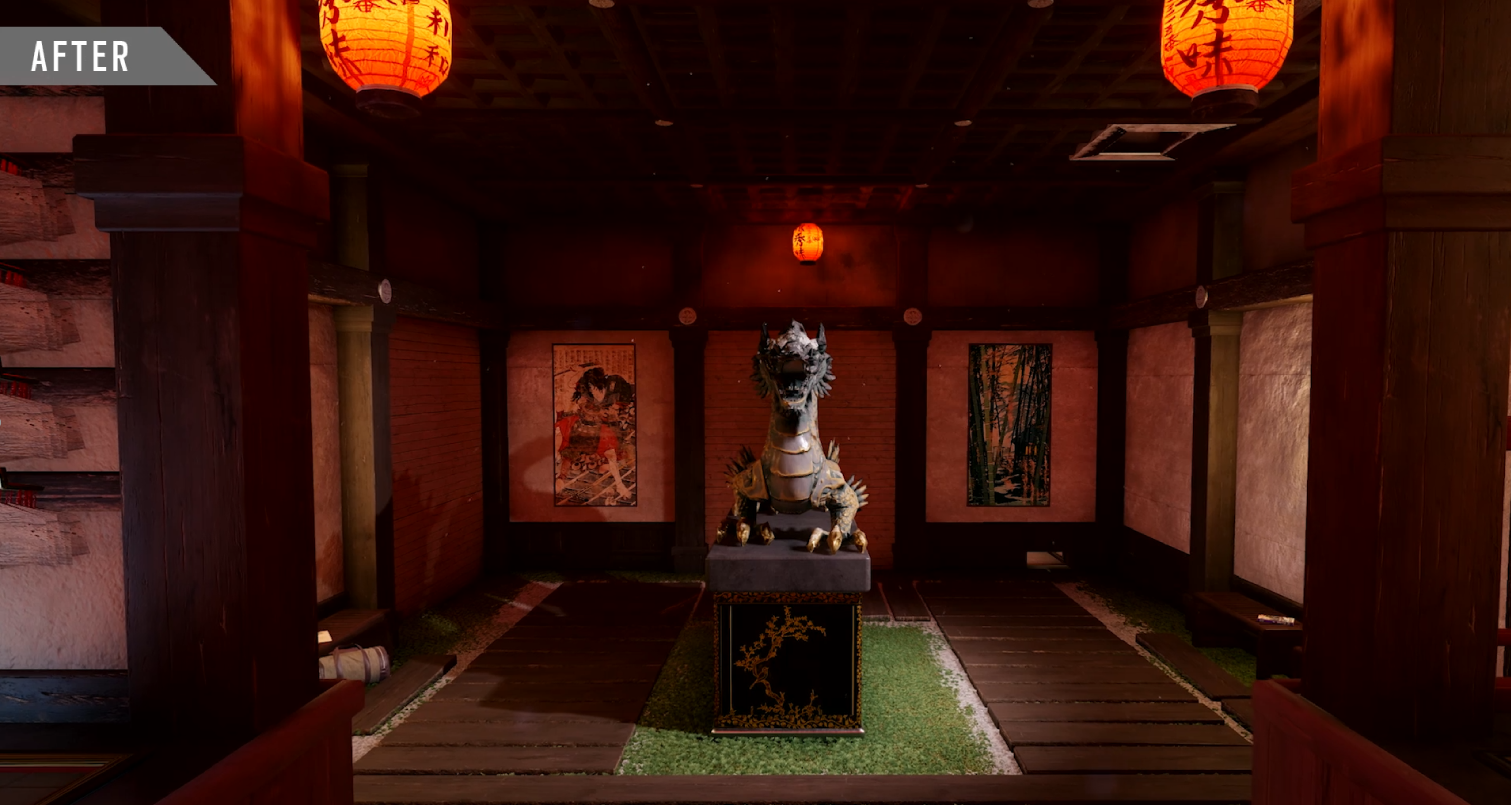 While House was specifically stated to be a "casual redesign" it is somewhat likely we will see Skyscraper reenter the competitive map pool with Border most at risk of being replaced.

Starting with the runouts, players will now be detected after just one second, down from three. This is effectively instantly which should make runouts easier to deal with at all tiers. For professional play, this is notable in post-plant situations, when throwing Black Eyes outside, and for a few rare rotations such as between Border's Armory and CCTV.

Echo will have his deployable shield reintroduced, while both Valkyrie and Wamai have lost their deployable shields as well. In addition, Wamai will also see his maximum number of MAG-NETs dropped by one to four total.

Ash, meanwhile, will be losing her flashbangs in favour of claymores but gaining an additional Breaching Round to bring that count to three.

Reinforcing is also now made twice as fast, leading to more time for defenders to set-up during their preparation phase or be able to put up late-round reinforcements with greater safety.

The act of defuser planting has also received some quality-of-life changes, as the defuser plant prompt will no longer need the operator to come to a standstill. Instead, the prompt will appear at walking speed as well. Furthermore, defusers can no longer be planted outside of objectives (e.g. the reverse plant in Bank's basement) and it can be planted on debris as well. The latter change, especially, will avoid a lot of grief with defuser plants that has plagued even the top-tiers of play.

As well as this, while not announced, the last two years both saw Pilot Program releases after the November Finals, signaling we may see the R6 SHARE Phase 2 skins release in the coming month. As a reminder, these are the organizations included in that:

Finally, the last two panels saw two elite skin reveals, with the leaked Tachanka Elite expected to be revealed in the coming days.