The two Latin American Majors both came to their conclusions this weekend, and we saw some upsets. Keep reading to catch up on the action both from Brazil. 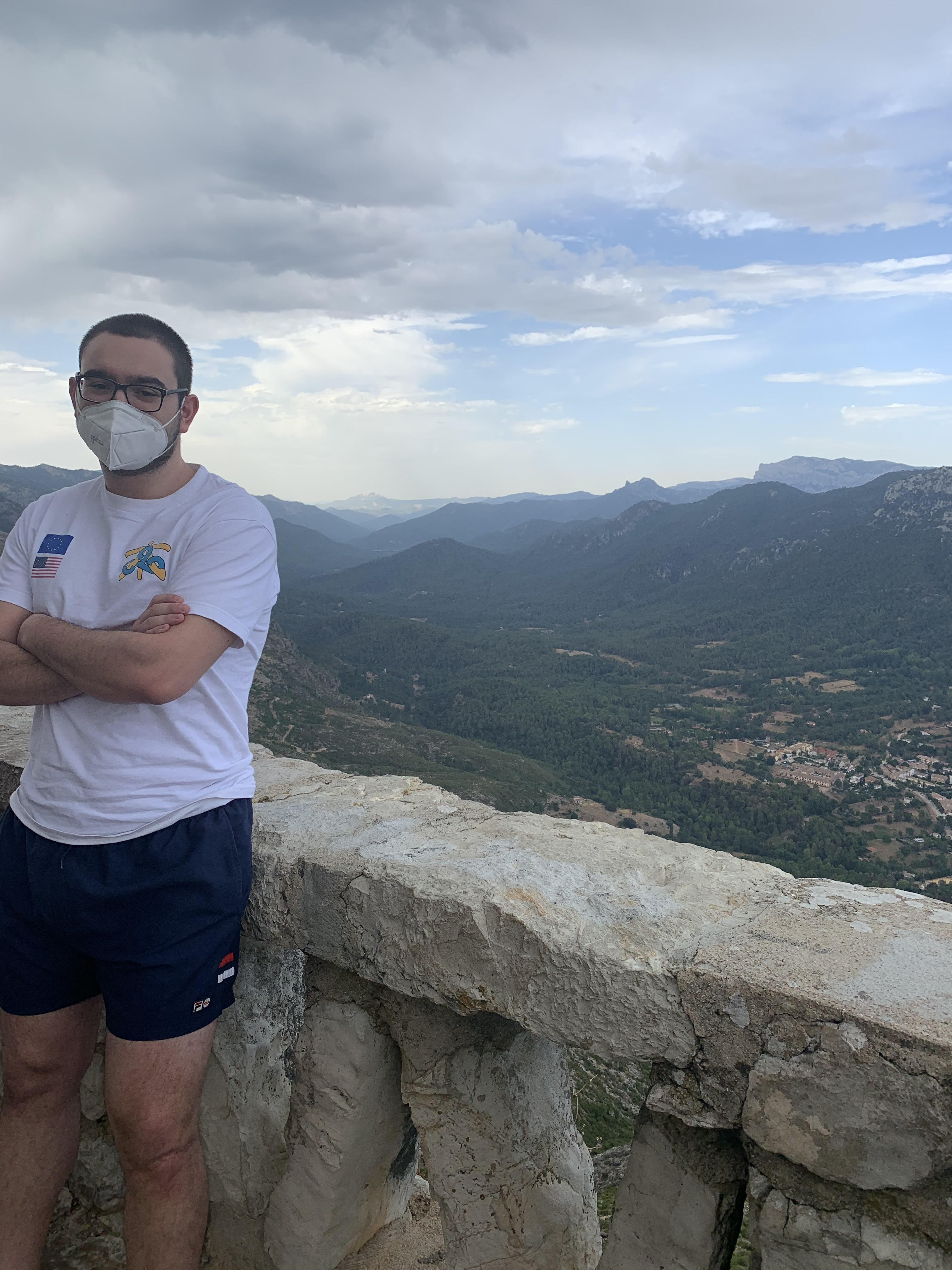 With the regular 2020 season complete outside of the relegations, and with COVID-19 getting even more problematic in Europe, Ubisoft once again introduced the online Majors as a temporary solution. These events will award the best teams of each region with SI Points, big amounts of money and the chance to become the best team in their respective regions.

Both Brazil and México will be the first to celebrate their “mini-majors”. These two sub-regions, in the best of the cases, would send a total of seven LATAM teams to the Six Major, which will count with the presence of twenty competitors.

This would obviously be a record, as the maximum for LATAM previously had been four teams in attendance.

Despite LATAM getting some good results recently -- Team Liquid winning the OGA PIT in Croatia and Ninjas in Pyjamas finishing in second place at the 2020 Six Invitational -- the truth is that the SI Points distribution has generated some controversy. The SI Points and the prize pool in LATAM are divided as it follows: 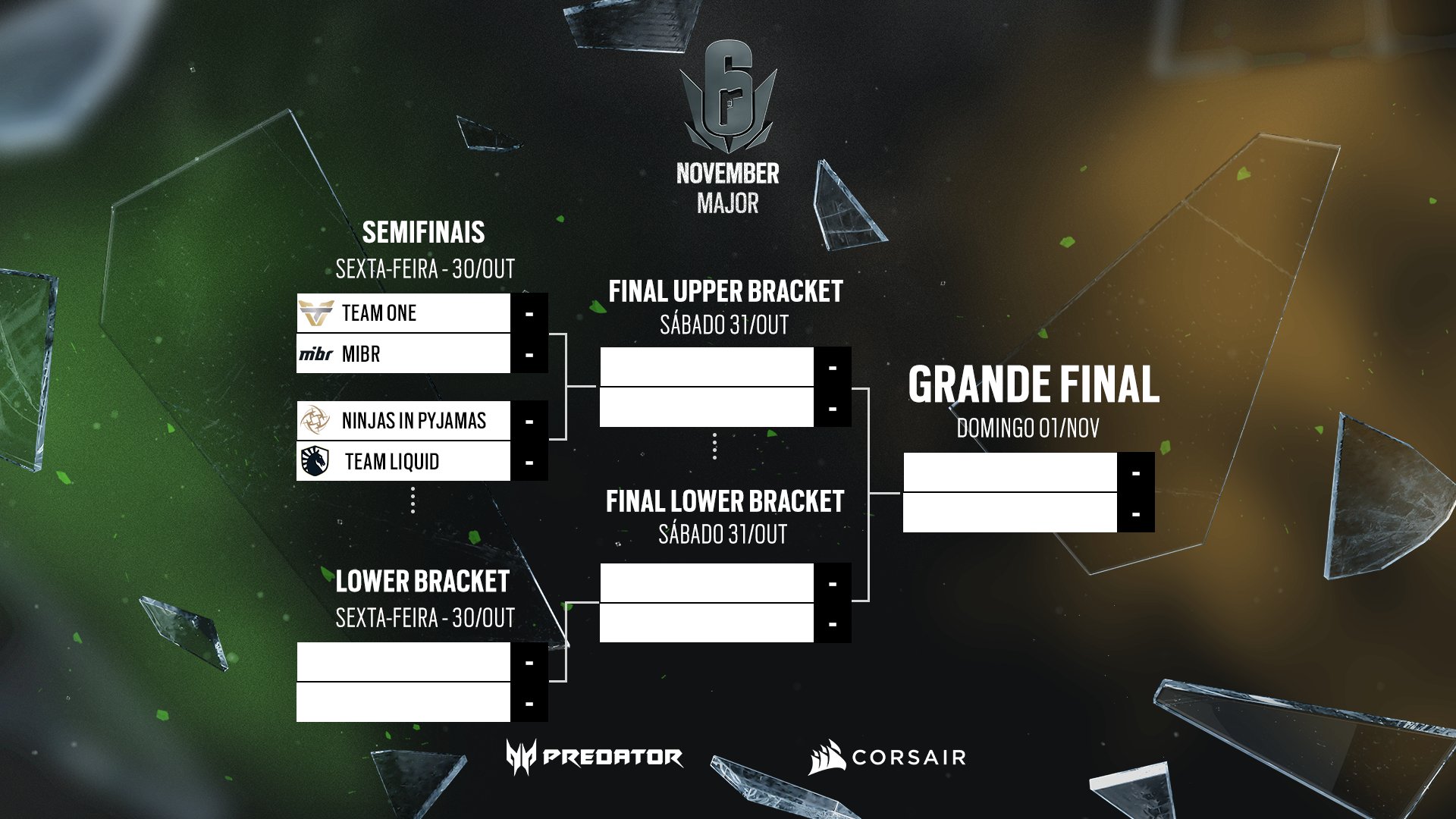 Keep in mind that in Brazil, the Regular Phase Top 4 are awarded with 225 SI Points, while the fifth gets 180.

With that clarified, let’s talk about what happened this weekend in Brazil.

The first day of competition was pure madness. A lot was at stake in the very first game, as MIBR desperately needed to finish at least in the top three in order to open up the gap between them and the teams outside the Top 16 in the Global Points Standing. Team oNe’s situation was similar, but with a different background.

After being Champions in Stage 1, the Brazilian team finished in last place at the August Major. The situation was the same this weekend, as Team oNe had finished in first place during the Regular Phase, so the pressure of proving to the viewers that they would also impress everyone in a Bo3 tournament was added to the dilemma of scoring the most SI Points possible.

The match was a very tough one, as the teams needed to play the third map in order to decide a winner. Oregon most likely decided the entire series, as the first map ended in a 8-7 win to Team oNe. MIBR were the favorites to win it, as they headed to overtime on defence.

MIBR’s then hit back, as Kafe ended in their hands after a very good offensive half, in which they won three of their four attacks. Coastline was next, and Team oNe caught MiBR off guard with the very first Glaz ban, as soulz1 had constantly picked the Russian operator in the previous map, which was combined with cameram4n’s Gridlock and Ying.

After a slow start from MIBR, their two last attacks were slightly different to the others as they introduced Dokkaebi in the fifth round and Ying in the sixth. However, things drastically changed in the second half as Team oNe won five of their six attacks, winning the map 7-5 and the series 2-1, which meant that MIBR would be placed in the Losers Bracket first game.

The second match was the most awaited by the fans, and it surely was the upset of the day. After 200 days, which include 21 matches, Ninjas in Pyjamas lost their very first game. Their last loss was against FaZe Clan back in Pro League Season 11, when ESL was still in control over the LATAM region.

NiP got to defend their unbeaten status across Stage 1, the August Major, and Stage 2, but, unfortunately for them and their fans, the Ninjas conceded their very first loss this weekend to Team Liquid.

Team Liquid came into the Major with a very irregular Stage 2, where xS3xyCake low numbers especially in the last half of the season proved to be a problem. Despite him doing his support job, his offensive numbers were not as high as, for example, their first opponents’ support of Kamikaze.

Team Liquid nearly choked a 5-1 lead on Oregon to start, but were saved by psk1 before moving onto Consulate, where Liquid once again secured match point and NiP once again tried forcing overtime. However, Liquid’s risky decision to defend Archives paid off, as Nesk picked NiP’s best player of the day, Muzi, off-guard to make it 4v5 with a minute and a half left.

Liquid’s round was very aggressive as, instead of playing the C4 game to deny every possible plant attempt from below, both Nesk and SexyCake -- Mute and Melusi respectively -- stuck together in the second floor defending Admin and Bath Room. Psycho and Julio quickly followed Muzi as Liquid left Kamikaze and pino in an impossible 2v5 situation. Liquid was in the next round and would play against Team oNe for a spot in the Grand Final, while MIBR and NiP would play for a spot in Day 2.

NiP’s day could have been even worse, as MIBR proved to be fierce opposition as they won the first map 7-3, which was played in Oregon. After winning the second map of Coastline, Consulate was next. Just like against Team Liquid, NiP was 3-6 down, however, this time they didn’t let their opponents close the game and the Six Invitational 2020 Finalists won five rounds in a row, making it 8-6. 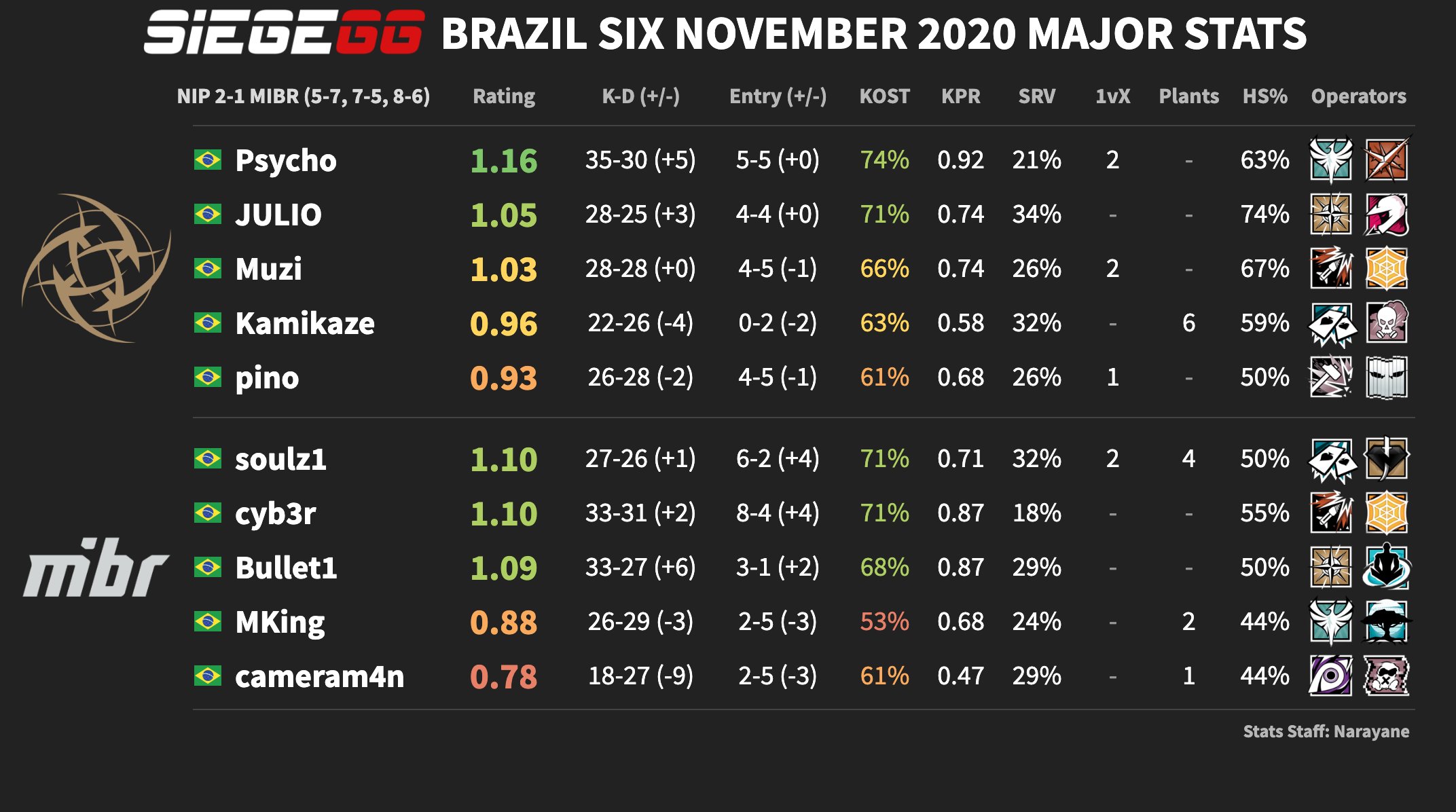 The current August Major winners would thus be in Day 2, while MIBR had to settle for a total of 455 SI Points, which leave them now in a very difficult spot in the Six Invitational 2021 race.

The second day was brief in Brazil, as the two matches ended with 2-0 results. The first one featured Team Liquid and Team oNe, two sides that did not make it to the previous Brazilian Six Major Final. This was then a very important game for both teams and it was Liquid the roster that got the ticket to the Grand Final.

The series began with a great defensive half by Liquid on Villa, as they got a 5-1 advantage that helped them to close the first match by 7-5. Clubhouse was an easier map for Liquid as they headed to their defensive half with a 3-3 on the scoreboard, which ended in a 7-3 as they did not lose any of their defences. Despite Team oNe banning Glaz on both maps, an operator that we saw during the first day, Liquid looked unstoppable as they were led by xS3xyCake with an amazing KOST of 82%.

Team oNe’s loss sent them to the Lower Bracket Finals, as they would play against Ninjas in Pyjamas in a fight to get a spot in the Grand Final against Liquid. Despite everyone expecting NiP to make it to the Grand Final, it was Team oNe that headed to Day 3 as they won both maps.

The first one, Clubhouse, ended with a 7-3 result as Team oNe won five out of their six defences. Consulate was decided in overtime, where T1 won both rounds, and so the previous Brazilian Six Major winners were knocked out. Although Muzi was the best player in the game, with five opening kills and the highest rating and KOST of the game, pino, Kamikaze, and especially Psycho’s low stats clearly were glaring weaknesses for NiP.

Coming from the Winners Bracket, Team Liquid faced Team oNe with one map advantage as the Grand Final was a best-of-five game. Viewers expected this to be a tough match, but at the end it was all Liquid’s.

The day started with Team oNe being dominated by Liquid on Clubhouse. The team started from the offensive side and, with no hard breachers banned, they had little problems in winning all their attacks. This left oNe in a very difficult place, especially on what’s in theory a defensive map. Despite losing the first round at Church and Armory, Team Liquid won 7-1 after a very dominating performance.

This first Liquid victory meant that they were one map away from winning the November Major. Coastline was the second map and Team oNe quickly took control of the game as they won five of their six first rounds in defence. Despite Liquid’s efforts to make a comeback, Team oNe forced the third map with a 7-5 win.

However, Oregon was the final map of the series. After a good performance on attack, where Liquid won four of their six rounds, the roster in blue did not give a chance to their opponents as they won 7-3. 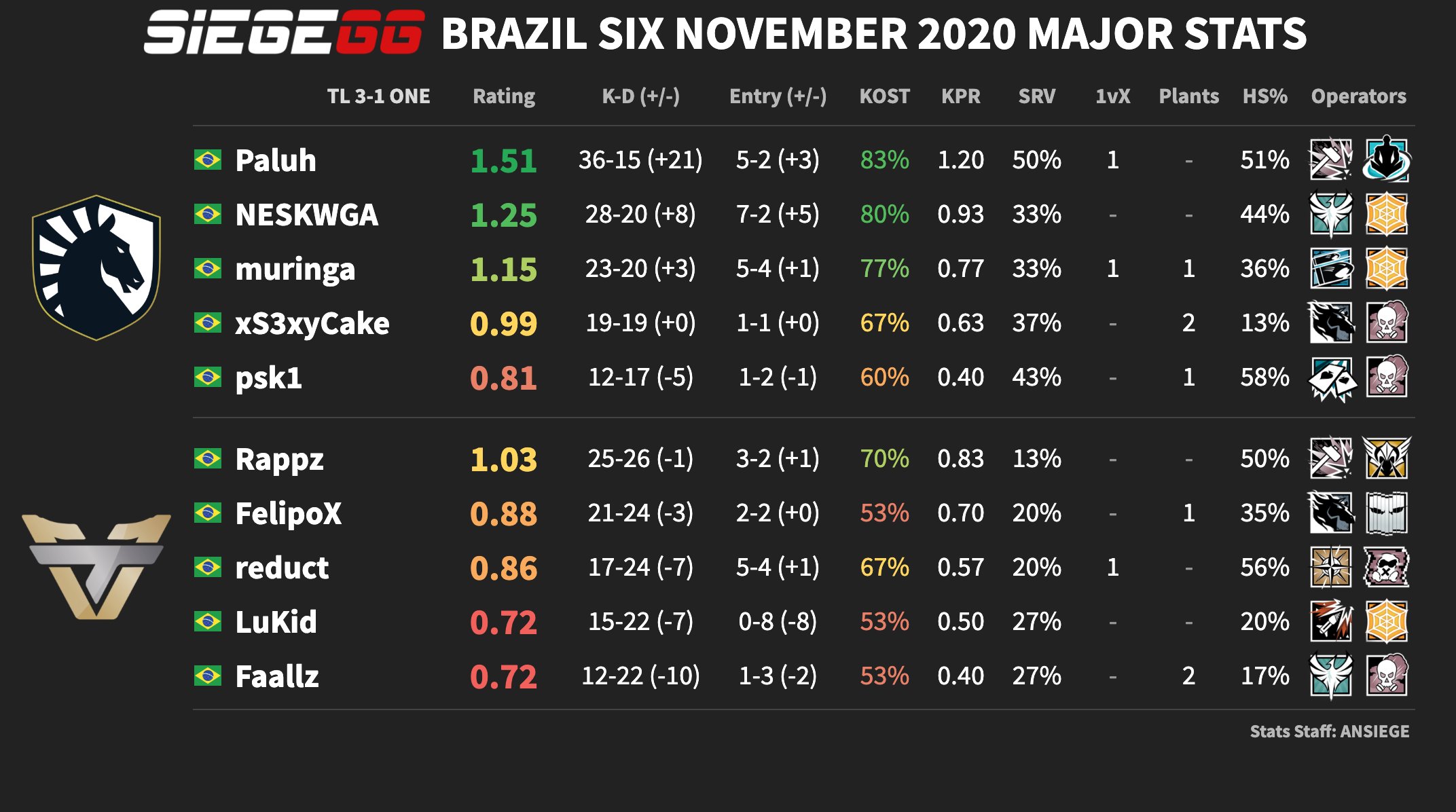