With the third week of the Korean Open 2020 Autumn complete, here's a rundown of all the action across the past weekend.

The dead-rubber Group A match between Faust and FriendlyFire Clan started off on Clubhouse, with the former on defense.

However, it was FriendlyFire that surged to a 3-0 lead on attack, thanks to five kills by Song across the three rounds. However, the next three rounds saw an equalisation as Parfait and r3plica each got four kills to put Faust at a 3-3 'disadvantage' before their transition to attack. Faust then surged into a 5-3 lead, but FriendlyFire struck right back to push proceedings to the 12th round at least, with the momentum firmly in the latter's favour and lu6y-aided retake bringing the map home 7-5.

A dead-rubber it may have been, but Clubhouse had been a close map and the second of Villa would be even closer. A back-and-forth led to a 3-3 first half, with FriendlyFire arguably coming off the worse this time on defense. The trades in rounds kept going and another 5-5 ensued, but overtime was at hand this time around. Surprisingly, though, overtime led to a solid defensive lockout, with Faust starting off on defense being the key that they needed to force a third map.

Unfortunately for their fans, FriendlyFire Clan started running out of gas on the final map of Oregon. Starting off on defense, they went down 0-2 and eventually had to mount a comeback to 3-3 at the half. From then on, it was entirely the Faust show, as they surged ahead on defense, taking round after round and eventually taking the map 7-3. 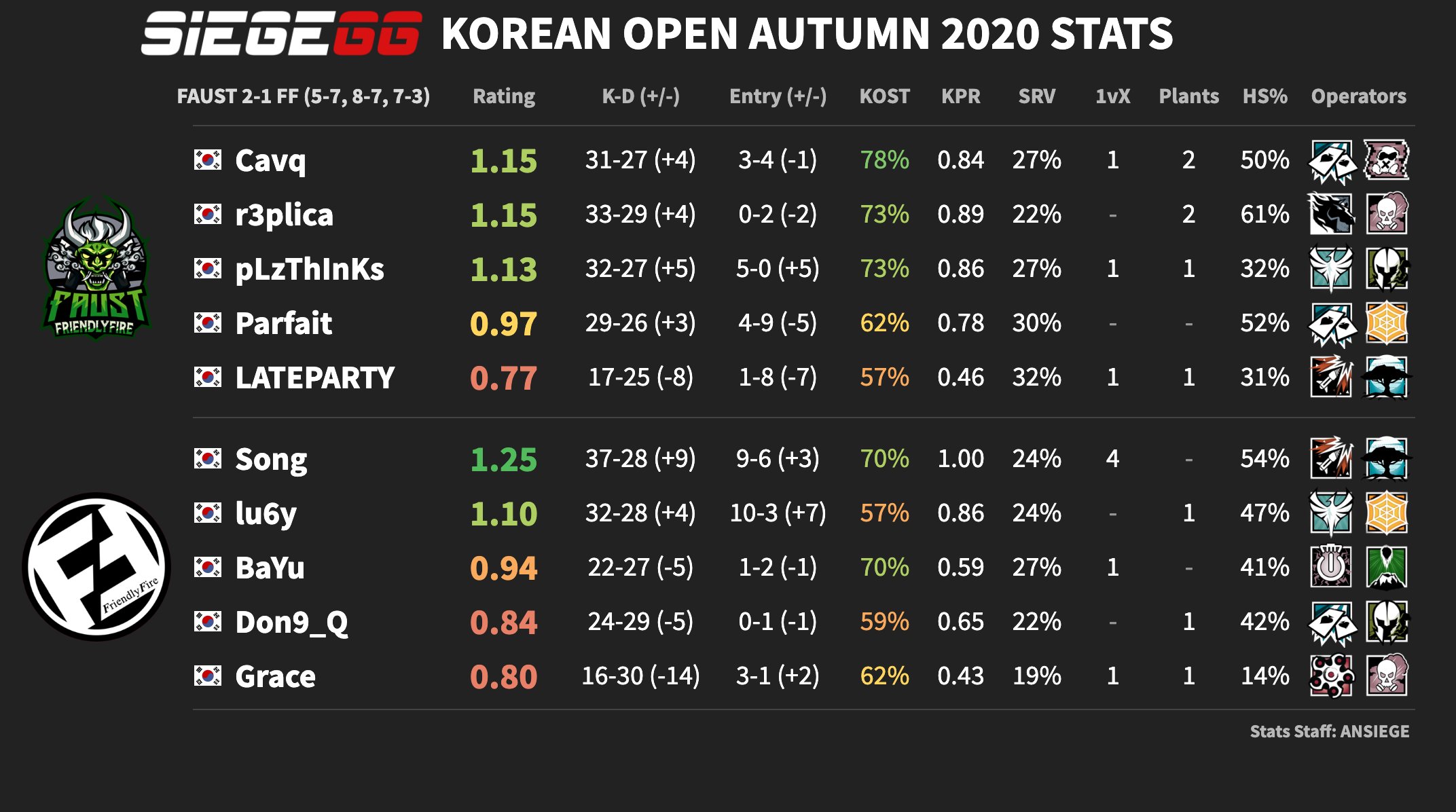 The Group B match, however, was far from a dead-rubber. Even though both teams are set to play in the APAC Relegations, the two were fighting for a chance to go to the playoffs here in the Korean Open 2020 Autumn tournament.

Starting on Consulate, it was SCARZ to get the early 2-1 lead on defense, but Talon pulled things back to a 2-3 before SCARZ regained control to equalise the score at the halfway point. Riding the momentum, SCARZ took their first attacking round as well, but Talon demonstrated why they had been able to perform better in the APAC North Division immediately in response. Four solid defenses, with the penultimate one involving a Demic quad-kill, meant that the SCARZ attack would shatter upon the sharp Talon defense and Consulate would go to the latter, 7-4.

Villa, on the other hand, started off well for Talon instead. While they lost their first round on defense, they responded to take the second, while PmW clutched out the third with a 1v2. The fourth round, meanwhile, was the Tomorrow show as he helped his team to a near-flawless round by way of an ace. SCARZ somewhat recovered the half by taking the final round, though, before marching on and taking a 5-4 lead with three defensive wins. Soldier, though, stood strong. A double-kill, quad-kill, and another double-kill was enough ofr his team to take the map 7-5 and book a playoffs spot. 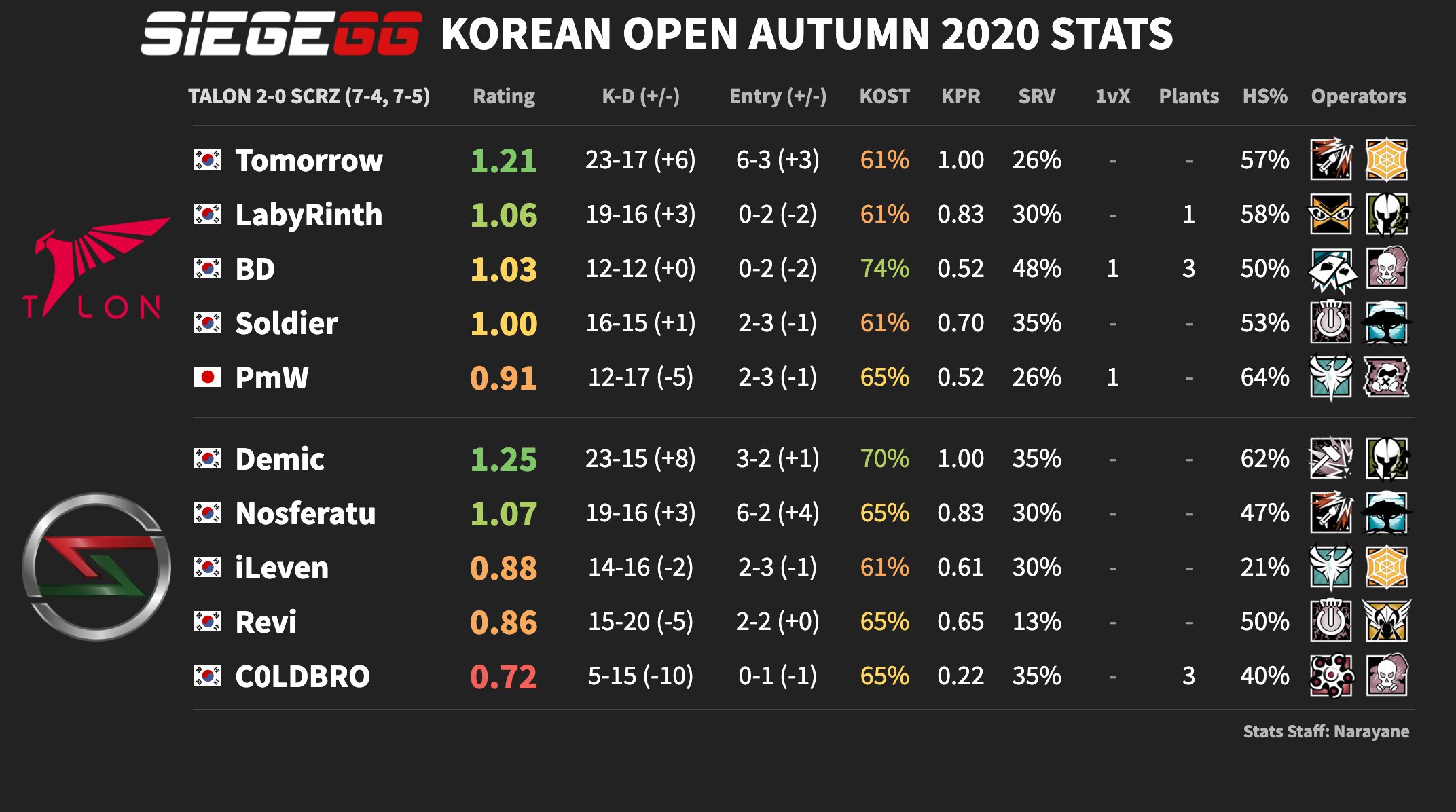 With both teams qualified for the playoffs, Cloud9 gearing up for the APAC November Major, and SGA looking to shore up their strategies for the APAC North Relegations, this match did not have much in it for either team.

Nevertheless, it was certainly an entertaining one, with proceedings kicking off on Villa. Despite SGA starting off on attack, they were the ones to cruise to an early 2-0 lead thanks to JungGoon and CircLe. However, Cloud9 had finisehd their warmup by then and roared back strong, slicing through the SGA attack for the remaining four rounds. Then up 4-2 at the half, their attacks did not let up on the pressure and the Korean champions eased to a 7-2 map win.

However, despite their dominance on Villa, things proved to be rather different on Oregon for Cloud9. SGA proved to be lethal in their attacks, taking the first three rounds and then going up 4-2 at the half. Cloud9 threatened a comeback, winning the first round after the role swap, but five kills in two rounds for N3ro put SGA on match point. Cloud9 delayed proceedings for a round, but a Wheatling triple-kill and a 1v1 clutch by Kira-Miki got SGA the 7-4 map win.

Cloud9 kickstarted the third map of Kafe on defense, pushing ahead with a 3-0 lead.  SGA pulled things back, securing two rounds in their attacking half, before gearing up to close down the two-round deficit. However, Cloud9 took the first round on attack. Nevertheless, SGA pushed back and took the next two rounds off the backs of a Kira-Miki 1v2 clutch and a N3ro quad-kill, but it would not be enough. Cloud9 took the final two rounds needed, finally closing out the series with the 7-4 map win. 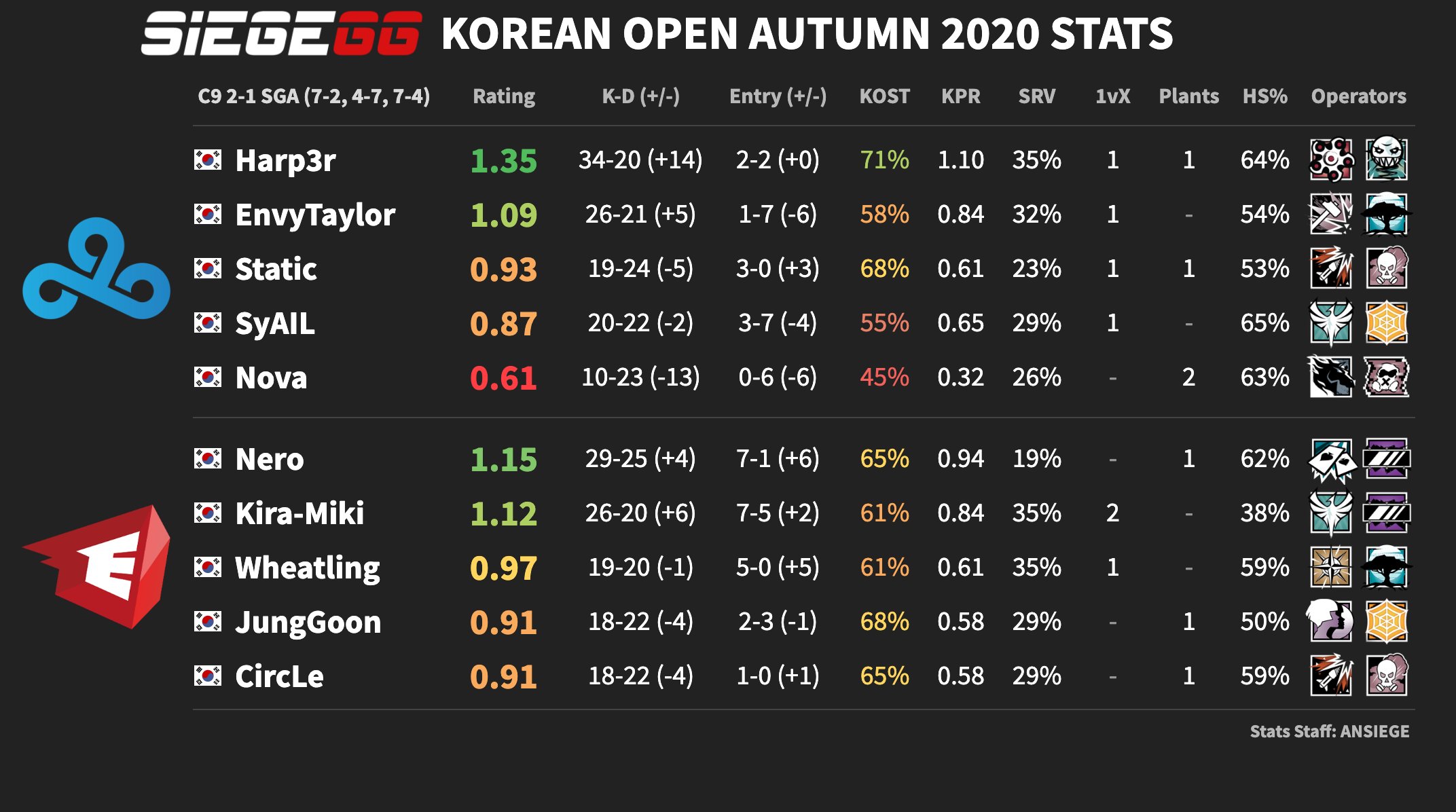 Another dead rubber game from Group B closed out the week, this time between GC Busan Spear and Use Drone -- the former already qualified for the playoffs and APAC North Relegations and the latter having no chance for either.

Oregon, putting it simply, was a bloodbath. On defense, GCBS took round after round, led by Chanzo in particular. A total of 12 kills went his way, with Use Drone seemingly unable to provide little more than a weak response. A 6-0 lockout in the first half quickly translated into a 7-0 victory on the map and things moved on to Coastline.

With GCBS starting off on defense again, it seemed like the story was going to follow the Oregon script exactly. Despite being on the arguably disadvantaged side, round after round went to GCBS as they swept to a 6-0 lead. Chanzo was once again the star of the show, getting kills in nearly every single round. Use Drone finally spared their own blushes by taking two rounds on defense, with the second coming after a site retake and disable, but GCBS did not let any more match points slip and closed out the map 7-2. 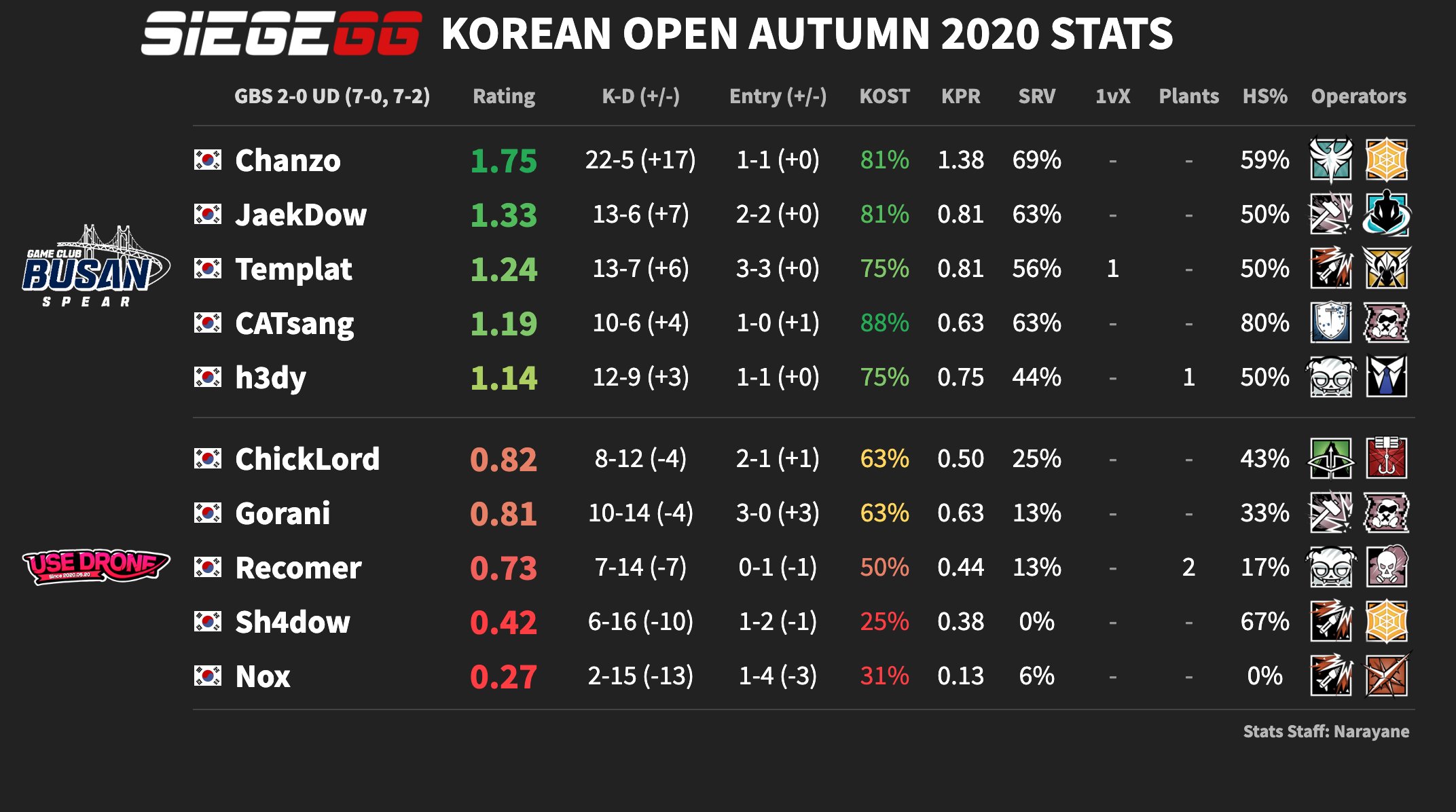 This week, be sure to tune in for the final week of play with the playoffs on the 30th of October at 7 PM KST (UTC+9) and on the 1st of November at 8 PM KST.

Of the four teams in the playoffs, the trio of Talon Esports, GC Busan Spear, and SGA eSports are all headed to the APAC North Relegations. What's more, with GCBS and SGA playing each other in the second semi-final, it is unclear if the two teams will use little more than default strategies. Talon Esports, too, will likely be hedging their strategies and will likely not showcase too much in their already-difficult semi-final against Cloud9.

EU League Stage 2: Who Can Challenge Na'Vi & BDS at the Top of Europe?
More news
We use cookies to improve your browsing experience. Learn more