The Thai and Taiwanese leagues' announcement means that teams in Singapore, Malaysia, Indonesia, and Philippines are left with no way into APAC North for the 2021 season.

With the end of the 2020 season coming up, Ubisoft yesterday shed some further light on how the Southeast Asian (SEA) APAC North Relegations will work.

The Operation League SEA Championship will see the top three teams from Season 3 of the Thai and Taiwanese Operation Leagues play for a chance to become the champion, and take down the lowest-ranked SEA team in APAC North at the end of the season.

However, teams from Singapore, Malaysia, Indonesia, and Philippines will be excluded from taking part, ostensibly "due to the COVID-19 pandemic". As such, teams from these countries will not be able to qualify for the APAC North Division until the 2022 season -- well over a year away. 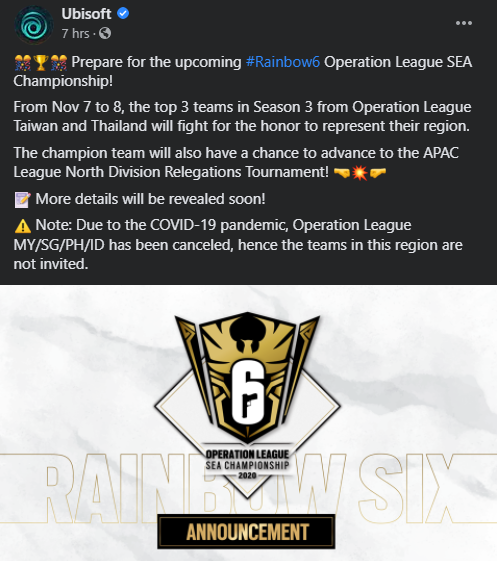 This statement comes despite the continuation of the Thai and Taiwanese Operation Leagues online, with no reason given as to why the same cannot be done for the four now-barred countries and their first suspended and now-canceled Operation League SEA (MY/SG/PH/ID) tournament.

While Electrify Esports is set to be the lowest team, it is possible that Qconfirm will join them. It is, however, currently unclear if Qconfirm will play the second-placed Operation League SEA Championship team, or a team from another region with the fewest teams in the top-eight (for example, Korea).

His Singaporean teammate of Adrian "Ysaera" Wui also chimed in, pointing out that this could very well see the various former Pro League players and other second-tier hopefuls in the region hang up their mouses for good.

I admit I don't follow [the] SEA/local scene much apart from APAC North, but this is just sad, basically left in the dirt with no chance to compete.

At least another year of waiting for a chance at QUALIFYING for North. There'll be no one left to try then, very worrying honestly.

I don't think blaming the COVID situation to justify abandoning the Tier 2 scene for multiple countries puts a very good look on whoever is in charge of the esports scene here, single-handedly killing upcoming talent with this move. No one sane enough is gonna invest time into this.

Imagine if this happened to us back when we had no incentive other than to qualify for the big leagues back then... I'd be back to school for sure.

Despite a lack of visibility, the Southeast Asian region outside of Taiwan and Thailand has been producing a fairly decent crop of teams and players over the years. Some notable names include Team Scrypt, an Indonesian squad that qualified for the Pro League APAC Finals in Season 7 and nearly beat Giants Gaming (then Aerowolf) to the Season 9 edition.

Former Aerowolf player Allessandro "Array" Billy Adi Dwiputra, who had been on the team with Lunarmetal and Ysaera in Season 9 is one of the former Pro League players affected, amongst 12 other players and three teams from Indonesia that had been active in Season 11. Also still excluded is the Chinese Special Administrative Region of Hong Kong.

The move also comes after no announcement in the interim since the indefinite suspension of the Operation League SEA (MY/SG/PH/ID) back in May, with players, teams, and organisations given no heads-up or prior information. This comes after the decision to suspend the league itself and invite Qconfirm had not been communicated to the teams back in May, with the teams having first obtained the information from SiegeGG instead.

It is unclear why Ubisoft has not allowed for the Operation League MY/SG/PH/ID to be played out online, but its sudden and abrupt cancellation has left the future of the competitive scenes in these countries very much in doubt. With no chance for teams from these countries to qualify for the 2021 APAC North season, it is unlikely many of the aforementioned semi-pro names stay hopeful for the mere chance to qualify to the 2022 season.