PG Nationals Winter 2020 — Everything You Need to Know

This week saw the kick-off of the fourth PG Italian National season as Mkers aims to regain the long held title MACKO won over them last season.

The latest Italian Nationals season sees eight teams play Best-of-One matches every Tuesday and Wednesday as part of a double round-robin format league. With the league kicking off yesterday, here's everything you need to know to catch up:

The top six teams from last season progressed into the Winter season while seeds seven and eight played in a relegation matchup against the top two teams from the PG Nationals Promotion Tournament:

Currently sitting up in fourth place in their Challenger League group, the reigning Italian champions have made an org change and two player changes since winning the national season as they replaced the two ex-EnD Gaming players of Hunter and Fratelli with the Mkers' player of Alation and the GoSkilla player of T3b.

Despite being in the Challenger League, the MACKO team never actually defeated Mkers -- the standout favorites and the team in which they took the title from -- as they fell to IGP in the Playoffs. This means while MACKO's main attention will be focused on the Challenger League, they will have a tough fight ahead of them as the new look Mkers lineup aims to take their title back off of MACKO and not slip up a second time.

Last season's runners-up shocked everyone when they took down Mkers in the playoffs only to lose 3-0 in the grand-finals. This season they return with two new players -- Simply from Mad Wizards and the new face of Lolloboii -- as they aim to do one better. Last season, despite finishing in second place, their regular-season performance saw every player receive middling ratings between 0.90 and 1.01 (which their new player of Simplyy also fits in with at 1.00).

Luckily for IGP, however, as one of the most intact rosters from last season, the team will have some of the longest experience playing together of any lineup in the PGN which will help with team synergy and means they don't need to relearn all of their strategies once again.

After winning seven seasons running, the Mkers roster previously known as EnD Gaming fell in the playoffs last season against IGP despite leading the league table throughout the entire season. This loss somewhat burst Mkers' bubble with the entire team leaving the starting lineup as the four and a half year long duo of Torok and Alation finally split with Alation moving to MACKO and Torok beginning his coaching career for Mkers.

Joining the team to continue the Mkers legacy is the core of the old GoSkilla roster in Gemini, Sasha and Aqui who are joined by the returning player of Sloppy after he spent a stage in the North American League for Tempo Storm and the ex-Mad Wizards player of Scatto. The GoSkilla roster came within a single round of defeating MACKO last season in the playoffs with three of the players finishing in the top six in the league by rating making them a standout team in both experience and prior performances.

This team has already somewhat proved themselves as they finished second in the Challenger League qualifiers losing in a nailbiting 7-5, 2-7, 7-8 scoreline to Cowana in the grand-final. This result already puts them as one of the top teams in Europe despite having only been officially formed that same month.

After being serious national challengers the entire season and defeating Mkers during the league to finish in second, GoSkilla then fell by a single round to the future national victors and Challenger League team of Samsung Morning Stars in the playoffs (7-4, 7-8, 5-7). Despite this impressive performance, the team has since fallen apart following allegations of missing wages and boot camps with not a single member remaining from that lineup which came so close last season. 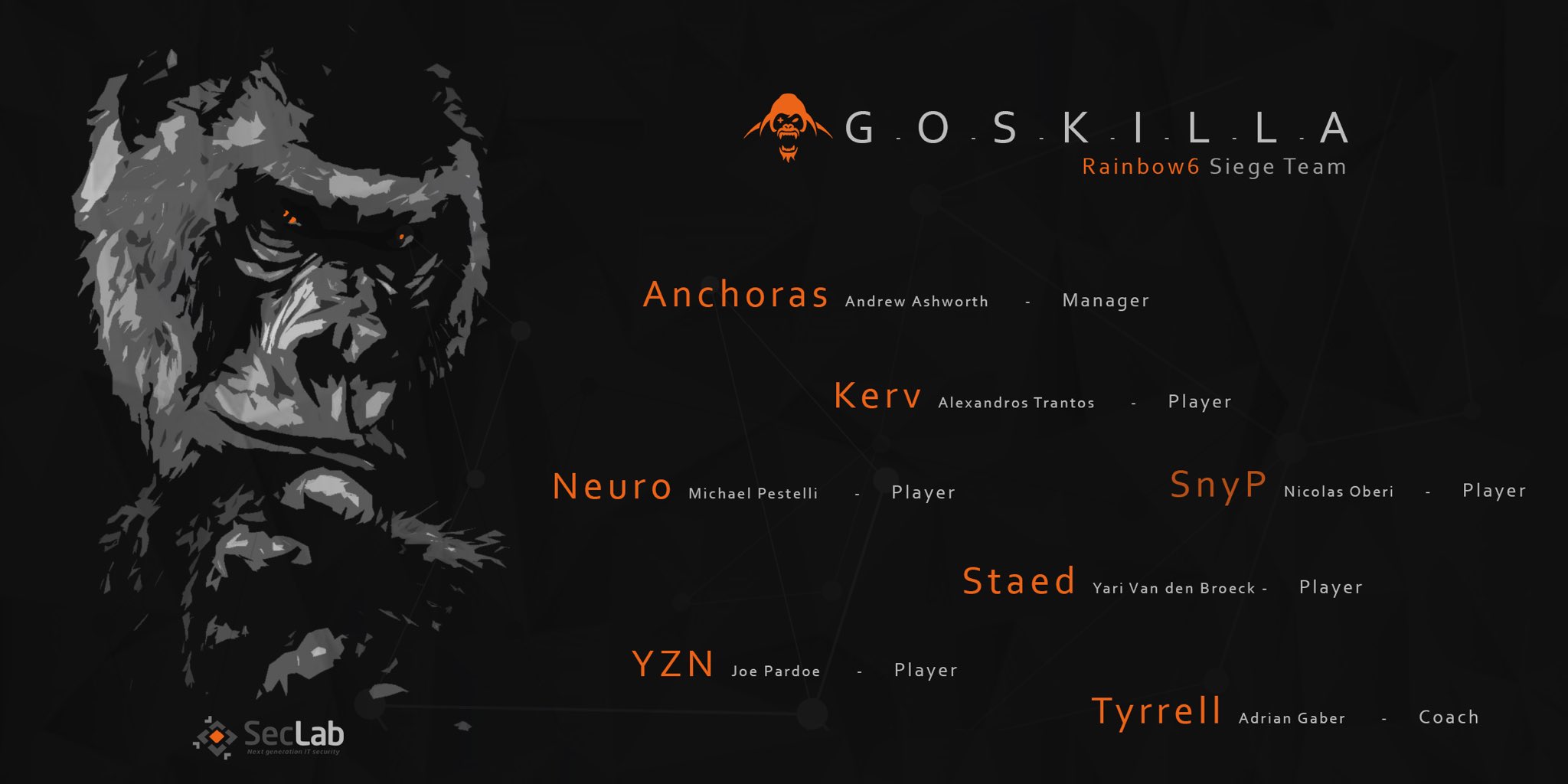 After missing out of the playoffs on the final game of the league last season, Mad Wizards have returned this season with four new players. Joining Super comes HappySimo and Atroci from IGP, Ellegy from Outplayed, and the relatively new player of KV. With these four returning players achieving ratings of 0.70, 0.79, 0.90 and 0.96 last season, this will be an uphill battle for the team as they hope to prove themselves as one of the top teams in Italy.

After finishing last season in sixth place, CGG has opted to completely reform the lineup just like the Wizards with just flusha remaining in the starting five. Joining him comes B3RTO from Mkers, NoAir from GoSkilla, and both Smirky and G3ro from the past two Notorious Legion lineups. This creates a real wildcard lineup that is really hard to judge ahead of the season as the team will be hoping the fresh acquisitions can inject some life into the team and push into the top four.

One thing going for CGG over Mad Wizards, however, is the quality of players as, on paper, Cyberground gathered the more elite options. Berto ended last season as the third highest-rated player in the league while only one out of five players (Smirky) achieved ratings as low as the Wizards highest rated player -- 0.93 compared to 0.96.

After Notorious Legion finished last season in seventh place, the entire Italian roster was replaced by a French lineup. This team which was able to compete in the PGN thanks to their Italian organization, beat off their opponents in their relegation matchup to qualify for this season as the very first non-Italian team to compete in the tournament, a fact which will likely make them one of the least popular teams to viewers.

Despite this, Notorious Legion does have a good shot this season after finishing the Challenger League Closed Qualifier in fifth place -- where they defeated their PGN Relegation opponents of Centrale del Latte di Roma once again -- putting them as the third top-seeded team from the PGN in that tournament behind just MACKO and Mkers.

The players themselves have been a part of various other national scenes for quite a while with Kxhz previously playing in this season of the 6 French League on Fawkes, and both Sura and Otgaz having previously played in Season 5 of the Benelux League for Epsilon eSports.

Previously known as Centrale del Latte di Roma (seemingly named after a Rome based dairy company), this team consisting of three Italian players, two British members in a player and coach and a Bulgarian player, this team won the Promotion Tournament, bested Outplayed in their relegation match and qualified for the Challenger League Closed Qualifiers showing there is promise in the lineup.

Nevertheless, with the exception of the ex-Premiership player of Jokerr, none of these players have any prior national experience making them a clear underdog this season which they'll be hoping to prove wrong as the season progresses.

The Season So Far and What's Next

The season sees a slight format change to last season with the double round-robin best-of-one map league invite the top six teams to the final rather than the top two. Seeds three to six will play an initial quarter-final with the two victors meeting seeds one and two in the semi-finals. Finally, after these best-of-three games, the eventual grand-final will once again be a best-of-five.

The season itself kicked off yesterday with the initial results seeing MACKO take an early league lead thanks to a 7-4 win over Mad Wizards while the new-look Mkers team was held to a draw against the French Notorious Legion lineup:

As well as these changes, the current Winter 2020 season and the upcoming Spring 2021 season will both offer points to its top teams depending on final placement. Following this, the bottom two teams by combined points will have to play in the relegations while teams in first to sixth will progress onwards to the Winter 2021 season.

By effectively extending the season to be a two-stage tournament, this encourages teams to stay together and means a single bad game is less likely to relegate a lineup. This also points to nationals around Europe possibly mimicking the EU League stage format in 2021, however, this is still to be determined.

Above: The format explained in Italian

The games are cast every Tuesday and Wednesday with playday two on Tuesday as yesterday's playday is skipped to not clash with the EU League. The games are cast by the usual names of Filippo "Etrurian" Burresi, Jody "ChiNook" Carraro, Valentino "LordChanka" Allegri and Mauro "JustRyuk" Barone on the Rainbow6IT Twitch account with the VODs and highlights available on the Rainbow Six Italia YouTube account.

Check back here at SiegeGG each week for further updates on the league as it progresses!