As EU headed to the second week of Challenger League, the competition finally started in NA, with their neighbors of LATAM already in Week 3.

The action was, once again, fierce in Group A, but quite predictable in Group B. Despite this, Gamma’s debut after acquiring the LowLandLions roster and the first clash between two of the three favourites in Group B were the headlines of the week. 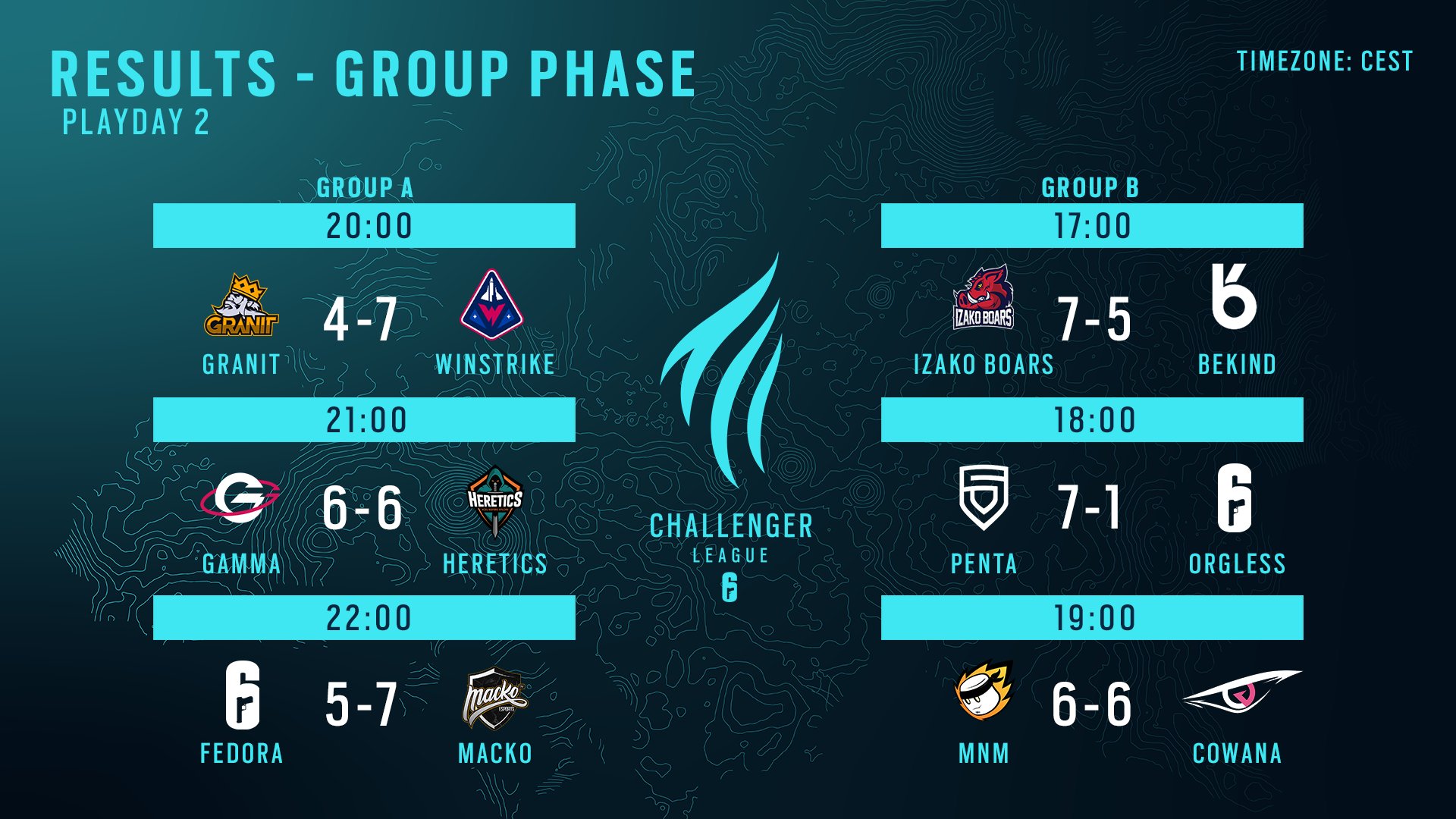 Just like the week before, there wasn’t any team that cleanly beat its opponents. Things started off well for Winstrike, as they won against the Nordic side of Granit Gaming. The match offered us a very levelled first half, as both teams swapped sides with a draw on the scoreboard despite Granit winning the very first two defences.

However, the Russian team clearly enjoyed itself during the second half, as it only dropped a Kitchen/Dining Hall defence, which was conditioned after Leri’s team kill ontoeXo, who was playing Jäger. This was surprising for everyone as the same Leri had got a double team kill with a frag grenade when playing with Maverick a few rounds before. Despite this scare, Winstrike won the game 7-4.

The next match of the day offered us the debut of Gamma, as this was the first game of the Benelux side under their new organization. Their opponents were the Spanish side of Team Heretics, who showed great potential in the first week of the competition despite dropping three rounds. This time, on Clubhouse, Heretics spoiled Gamma’s debut as the result ended in a draw.

After a flawless round by Gamma at the beginning of the match, Heretics showcased a very aggressive mentality, which combined with a very good droning made them win three of their six attacks. Despite Gamma winning their first two defences, a re-host by Heretics as one of their players seemed to have a sound bug, seemed to help the Spanish side as they tied the game. Gamma then won the 11th round and, in an attempt to surprise Heretics as the Benelux side introduced Avaiche’s Montagne, the Spanish roster resisted their opponents attack to finally get the draw.

The final game of the day encountered Team Fedora and MACKO, in what was the Italian’s first win. The map, which was played on Villa, was decided in the second half as MACKO won three rounds in what is one of the most defended sided maps in the map pool. The Italian side put themselves in match point in round eight, but Team Fedora didn’t make it easy as the game was decided in the very last round. After SirBoss’ plant, Fratelli found himself in a 1v1 post-plant situation against Alation, a duel that the Nomad won.

Last week’s games showed us that this group is most likely divided in two categories: the three teams of MnM, PENTA, and Cowana fighting for the first spot, and the three teams of Izako Bears, beKind, and Orgless, fighting for the last playoff place. The Polish side of Izako Bears made the first step to that direction as they won against beKind by 7-5.

This was followed by another PENTA massive win, this time against Orgless (7-1), as the French team won five of their six defences and their only two attacks. This roster seems by far one of the most solid ones in the competition, as their immaculate droning and their solidity in defence seem to be in point to give a good fight to some of the teams currently playing in the European League.

The last game of the group was a very interesting one, as it was the first duel between two of the favourite sides. The two UKIN teams in Challenger League -- MnM Gaming and Cowana Gaming -- played on Coastline, the first appearance of the Spanish map in this Challenger League.

The recently promoted side of Cowana really made things hard for MnM, and while MnM got an early lead, they struggled to open up a sizeable gap. On the other hand, Cowana were able to do so, as they got to match point in Round 10. Despite that, Dats and Fonkers saved MnM first in 11th round, while a solid attack in round twelfth left Grizzly in an impossible 1v5 post-plant situation to result in the group’s first draw.

On the other side of the ocean, the North American Challenger League started with a massive game. The team of The Last Dance, comprised of Yung and Spades (ex-Evil Geniuses), Doodle (ex-Luminosity Gaming), Butterzz (ex-Tempo Storm), and Kilo faced APE, which has the likes of the ex-eUnited players of Forrest (FoFoSan) and Callout. 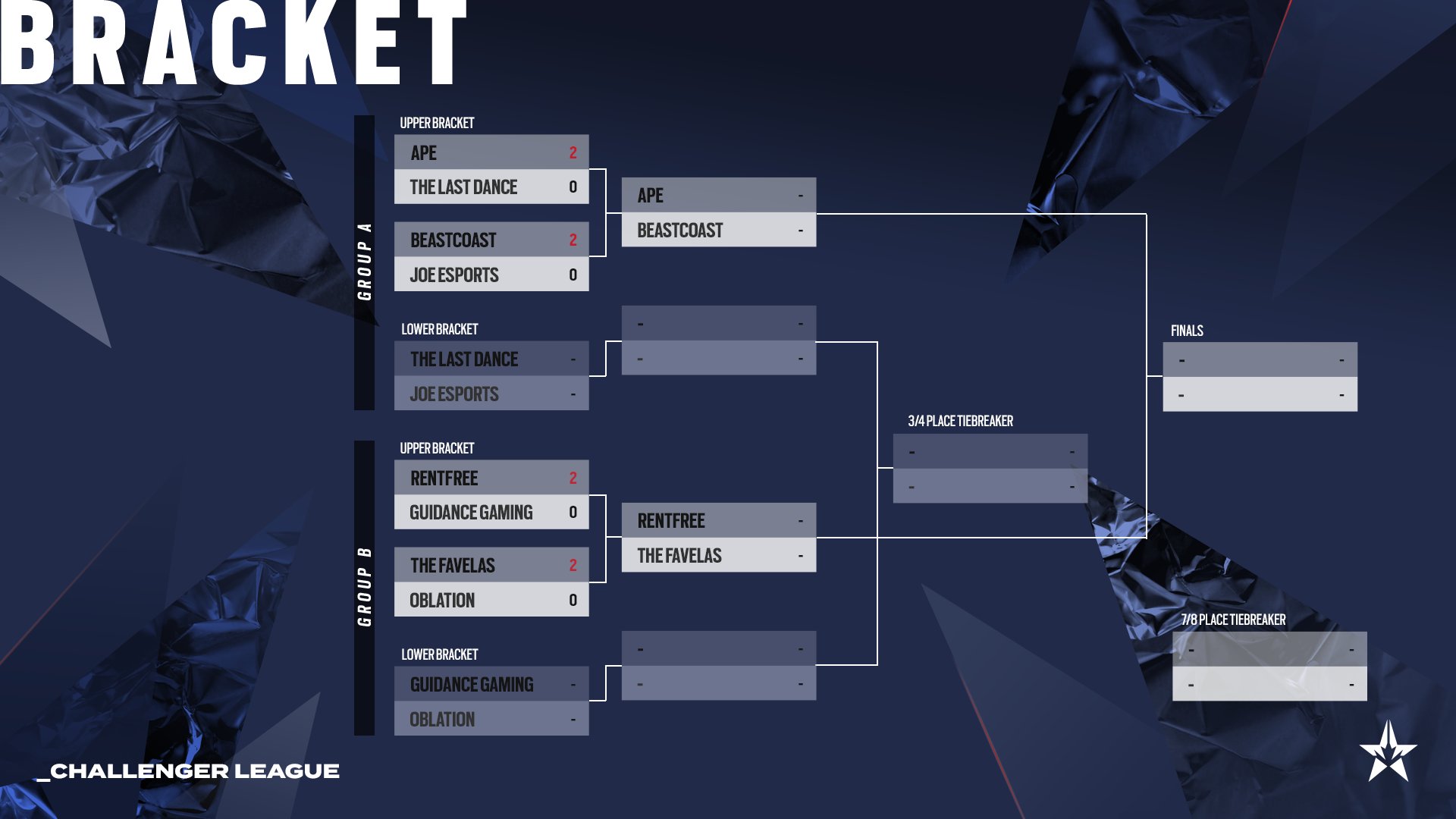 Just as the NA League, the Challenger League is split in two brackets with best-of-three matches. In this first game, Oregon, Villa, and Theme Park were the maps chosen. Despite this being a very close match, the side of APE won 2-0 after two overtimes, as Oregon ended 8-6 and Villa 8-7.

Although APE was the final winner, it was TLD the team that led for the most time. In fact, the first half in Oregon ended in a 5-1 in favour of TLD, which was later equaled by APE to force overtime. After 10 of these 12 rounds were won by the defenders, APE got an important start as they started overtime while defending.

As APE won the first overtime round, TLD seemed to be able to push it to the 15th, as Callout was left in an almost impossible 1v3 situation without the defuser. But there’s a reason we always say “almost impossible” because the ex-eUnited player clutched it. Despite Callout giving its team the first map, Yoggah was the player of the game as he secured 21 kills.

The second map of the series was just a replay of what we saw in Oregon. TLD first offensive half was a strong one as, despite playing on such a defensive sided map, the team won five of six attacks. The match point came on Round 9, and as TLD were defending, people thought it was just a matter of time the team would force the third map. However, instead, it was APE who forced overtime once again. This time led by FoFoSan, with 16 kills, APE won a map where each one of their members ended with at least 10 kills. 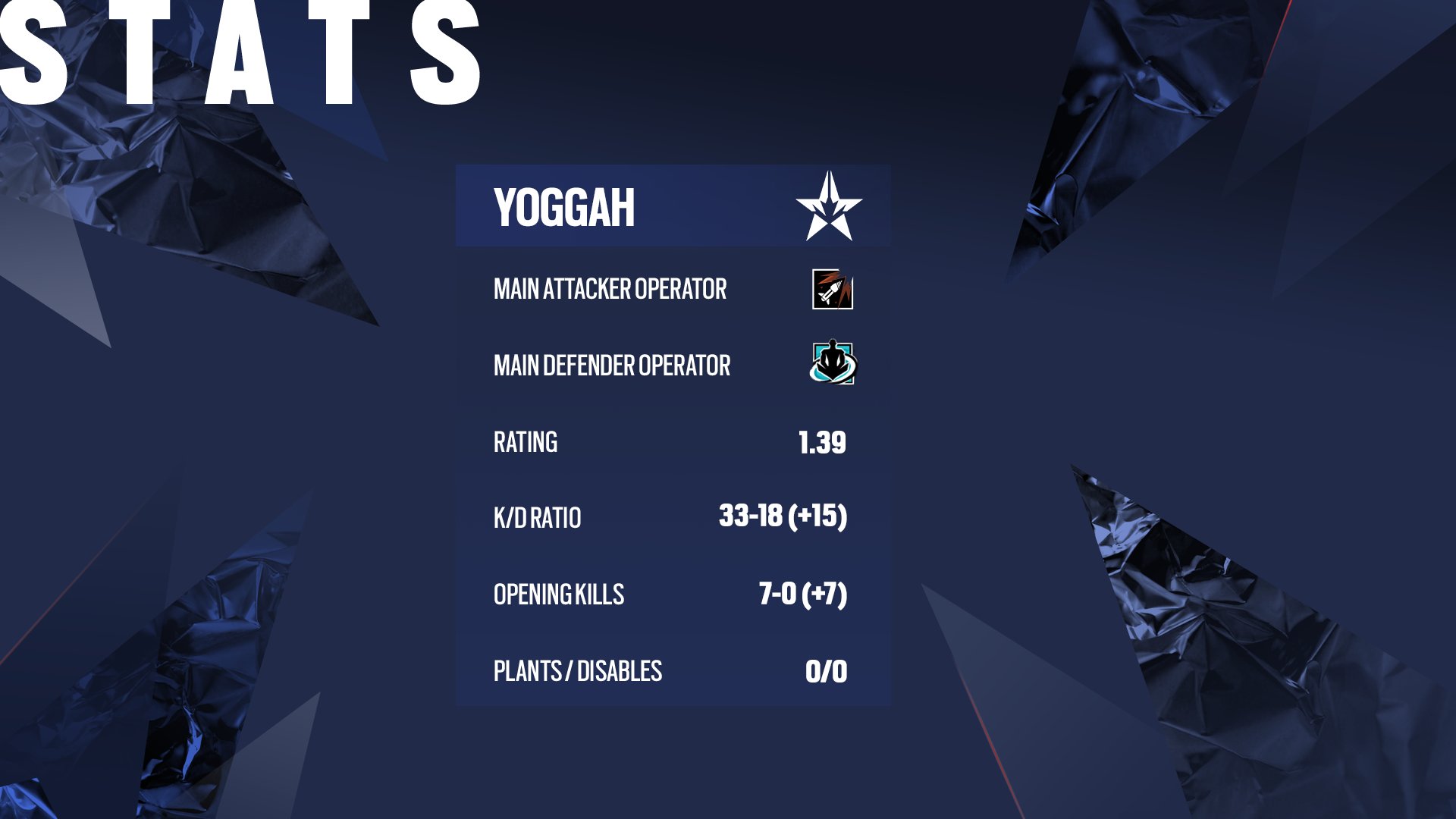 The rest of the games were less intense, as beastcoast won two maps by 3-7 against Joe esports, while Rent Free completely destroyed Guidance Gaming as they won their two maps 7-1 and 7-2. Another 2-0 win by The Favelas against Team Oblation was then the last game of the week in the US Division.

The script seen in Canada was similar, as three of the four games played ended in 2-0 results. Honor Esports and da slatts featured in the first game of the bracket, which ended in a Honor win after a comfortable game on Clubhouse (7-2) and a tough fight on Consulate (8-7). PDHM followed with another 2-0 win against Slaughter House, as they won on Theme Park and Villa pretty comfortably (3-7, 4-7).

On the other side of the bracket, we saw Oblivion facing Windstorm, which was another 2-0 win -- this time for Oblivion. The last game of the week in Canada was the only that ended 2-1, and was won by Oceanus Gaming. This surely was the most intense game, as Depth Esports kicked things off with a 7-4 win on Oregon but Oceanus Gaming survived to the second map after winning 8-7 on Villa. The last map, Kafe, ended 7-4 as OCG advanced to the following round. 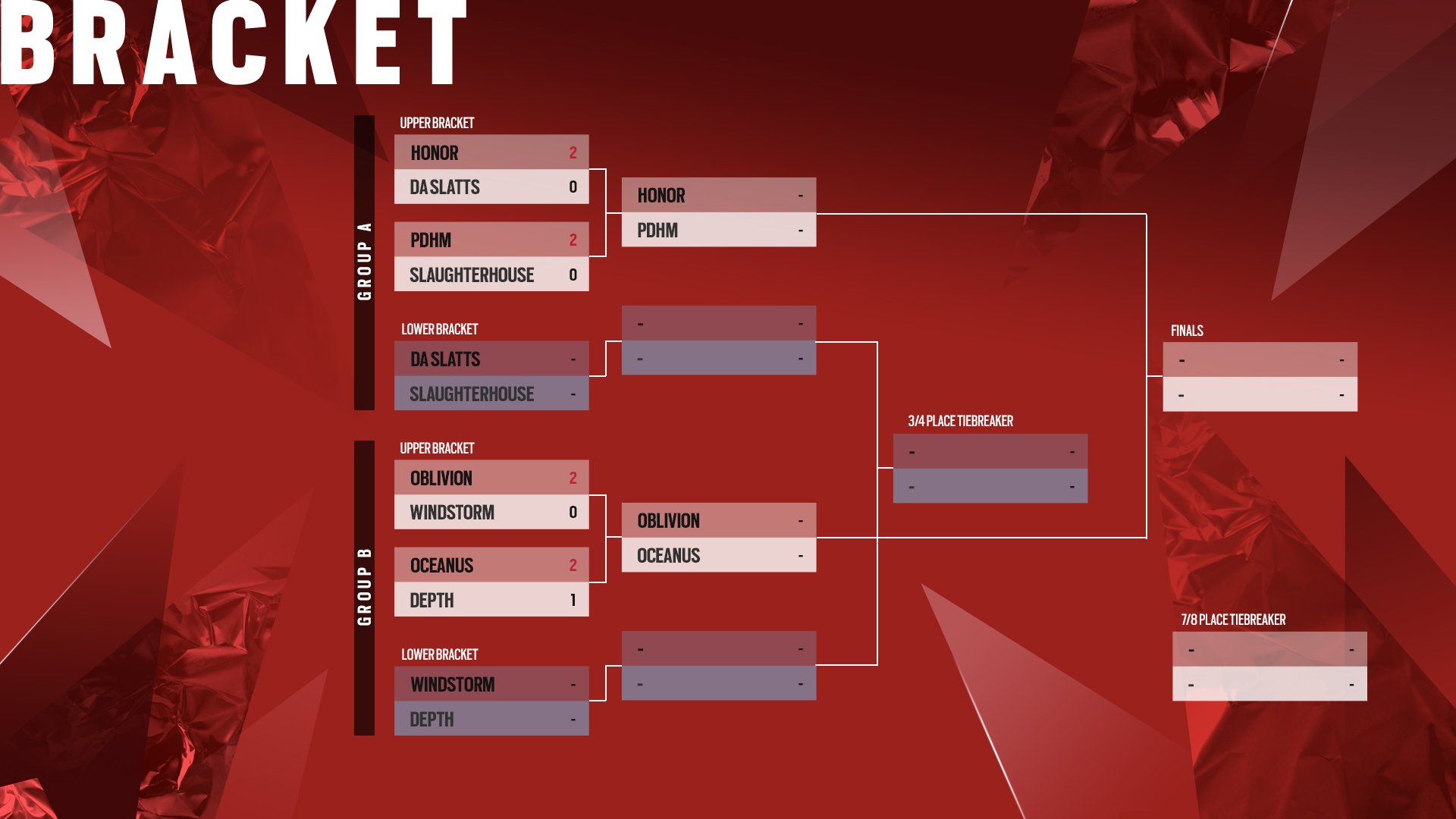 Down in LATAM we saw action in Brazil, México, and South America. Let’s have a look at the Brasileirão first.

After a very strong start by Falkol, the team has only been losing points since their loss against Isurus. This week, the Brazilian side has drawn their two games, against the third placed team of Royal Republic and the seventh placed roster of Team Singularity.

However, just like in the last week, Falkol got to maintain the first place thanks to the results of their direct rivals; however, the gap between the first-placed team and the seventh is only four points. With only two weeks of competition left -- four game-days -- the ending to this league will be one to follow closely.

In México, a 2-0 win and a draw by Overknight was enough to keep their undefeated record in the league, but not the first place as two perfect wins put IGNIS at the top of the table. Overknight’s performances against their direct rivals -- 2-0 against IGNIS and 1-0 against ESTORM -- gave their fans plenty of hope, however the three of the four points lost were against the current fifth and sixth placed teams. Despite Team Aze winning against Panda Gaming in the first game-day of the week, their 2-0 loss against their direct rivals of ESTORM left them in fourth place with seven points, three behind of the third placed roster. 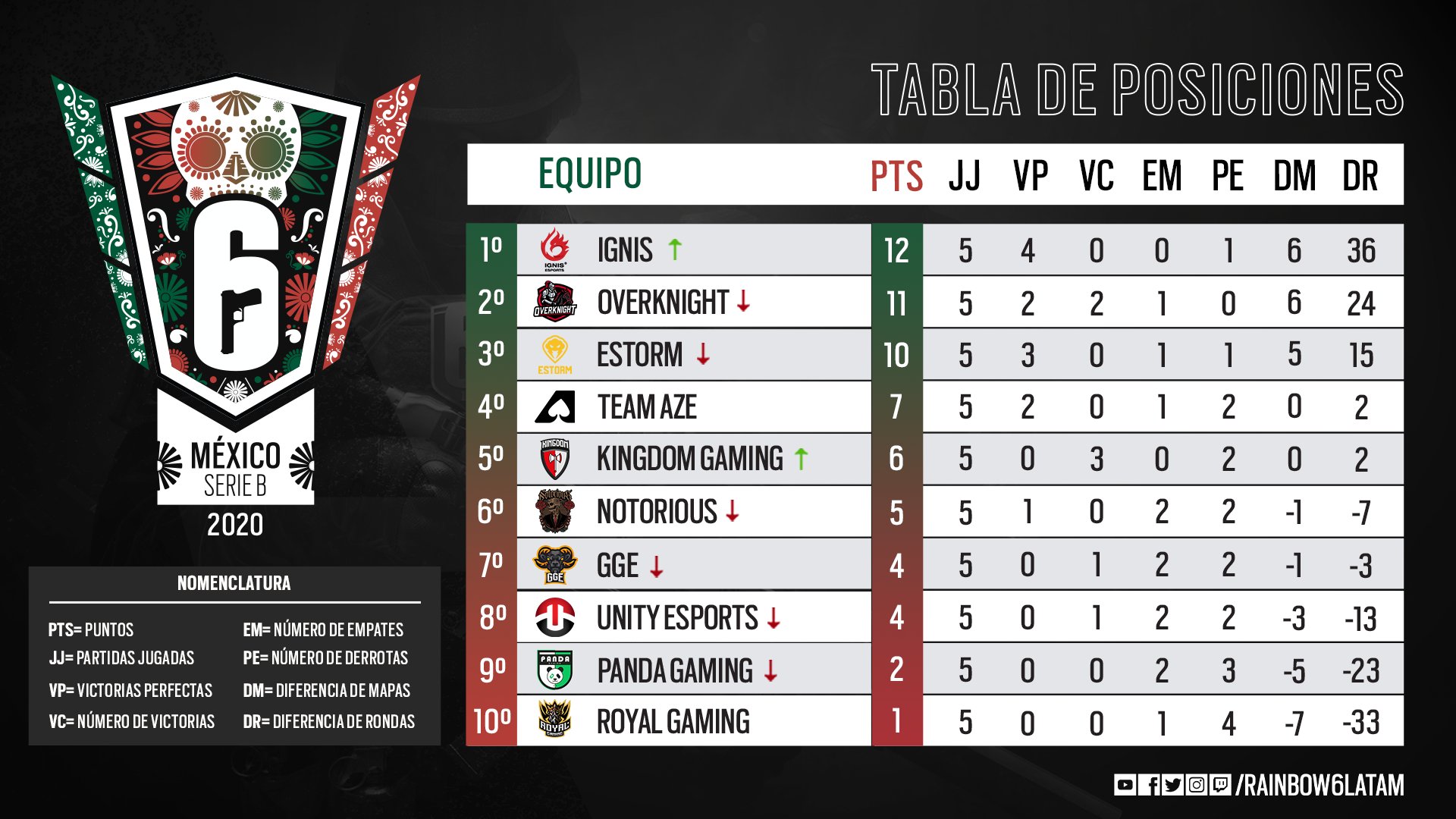 To conclude this summary we have South América, where we can clearly see a difference between the Top 4 and the rest of the teams in the league. The standings are currently led by Maycam, who are yet to drop a map. After winning 2-0 against the Hawks and 2-0 against their direct opponents of Goat Gaming, Maycam are first with 15 points. In second place we have the Colombian team of RXG, who lost against another Top 4 side, LDM, although this wasn’t an issue to keep second place. This week’s results make a big separation between the fourth and the fifth, as there are five points between Goat Gaming and ACE1 and only a big upset would change the current top four. 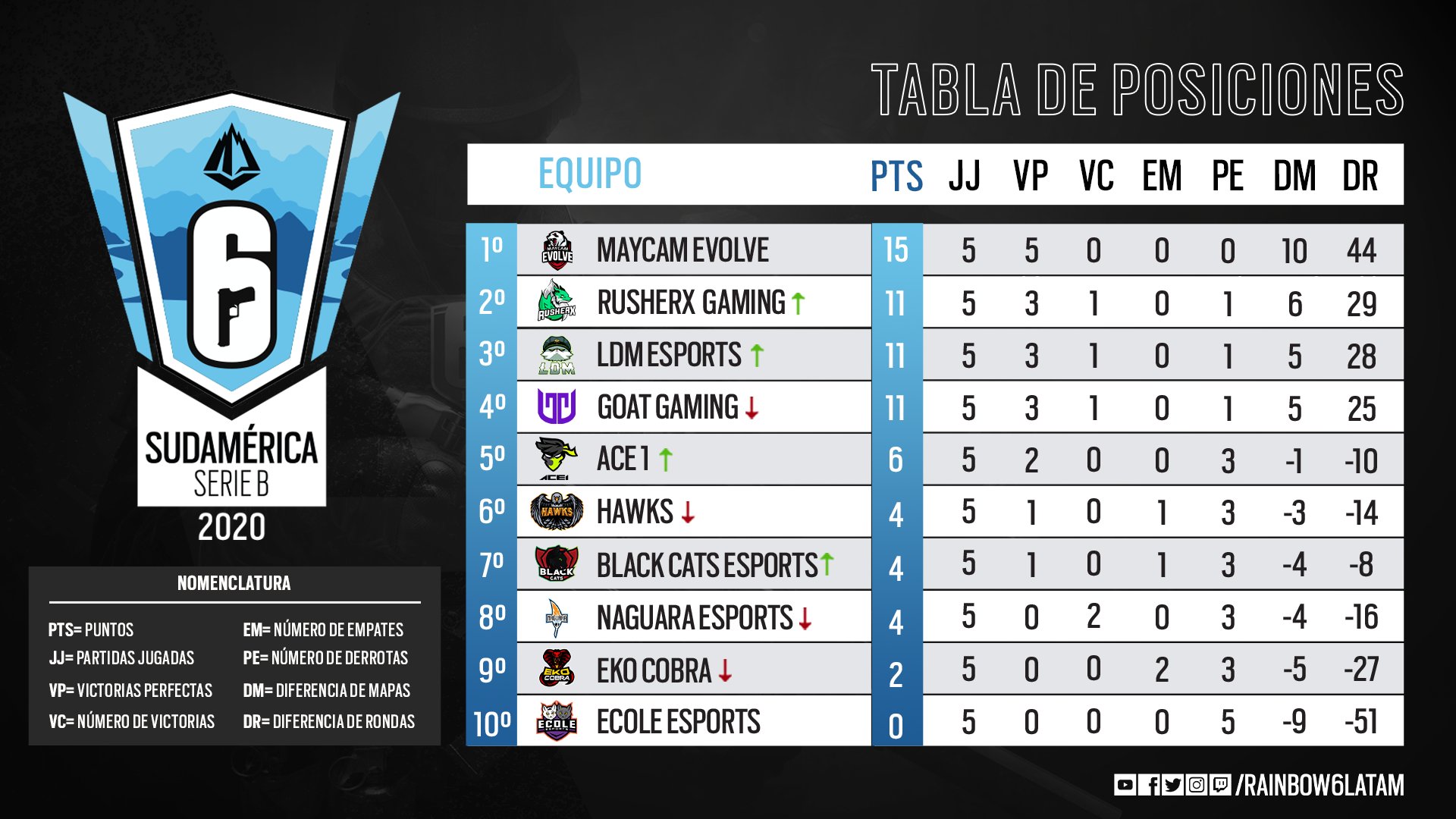 For continued coverage of the global Challenger Leagues, check back here at SiegeGG and follow us on Twitter.