When the NAL zigged, Tempo Storm zagged, and the changes they made could pay off big time in the long run.

The word “savvy” is likely to conjure an image of Disney’s Captain Jack Sparrow, arms drunkenly akimbo, fleeing some kind of mortal peril. It’s used commonly by Sparrow when trying to manipulate a hapless guard, likely slotted in after a belligerent explanation of why he was caught sneaking around a galleon with a chicken and the key to the captain’s quarters.

In technical terms, this use is correct, “savvy” as a verb does mean something akin to “do you understand.”

It’s a turn of phrase that Johnny Depp’s character uses to force agreement with his previous statements, or the subject risks looking far stupider than the clearly hammered man in front of them.

Beyond the version of the word commonly known from pop culture, the word has another meaning: it means to have the experience that aids in making judgment calls, to have common sense when it refers to the task at hand. “Savvy” is something exploited by veterans, something accrued through years of experience.

In North American Rainbow Six Siege, there’s been a youth movement during the offseason. Disrupt Gaming boasts talented rookies Nick “njr” Rapier and Jack “J9O” Burkard, and the Susquehanna Soniqs’ David “iconic” Ifidon has been performing excellently. In their rebuild, eUnited opted to go with the talented-but-unproven Evan “Kanzen” Bushore, who had an excellent first series.

When Tempo Storm decided to make a change in the offseason, they went a different direction. While all of North America went in the direction of youth, they went for veterans.

“It became fairly clear pretty quickly after going through the last split that what we needed was more experience. We had shooters already, its the support system that needed love,” said Trevor “KenZ” Kenzie, Tempo Storm’s head coach.

Between the Mini-Major Qualifier and the beginning of Stage 2, Tempo Storm dropped Manuel “Sloppy” Malfer and picked up Sam “Jarvis” Jarvis in his stead. In addition, they added Robert “RaMz” Rockhill as an analyst. RaMz is no stranger to old fans of Rainbow Six, he’s a former caster, desk analyst, and professional player. He’s held just about every job you can have in the professional scene.

According to KenZ, choosing Jarvis was extremely easy. “When you look at the current Challenger League pool and think about veteran players, there is no one that's put more thought or work into the basic and fundamentals of Siege then Jarvis. He was the first guy we tried out and right away you could tell that he completed the roster. When we moved onto the next tryout, it felt like something was missing. I'm very happy to have him on the lineup.”

The experience that Jarvis and RaMz bring to the roster is already paying dividends for Tempo Storm. In their first match of Stage 2, they upset a staunch Oxygen Esports team, and looked downright dominant at times while doing it. Sure, one data point isn’t a surefire positive. But it sure is a good start. Anecdotally, Tempo Storm is the only one of the “bottom four” teams that upset a “top four” team from the last stage, but others did come close. EUnited gave Spacestation Gaming a run for their money, and Disrupt looked solid for a map against the raw mechanical skill of TSM.

"The addition of Jarvis and RaMz just brings a whole other level to the team,” said Giuliano “Krazy” Solon. “Jarvis with his communication skills and Ramz scouting the other teams, it makes it easy for us to all focus on our own little jobs, and together as a team it’s one big job.”

For Krazy specifically, the successful start has to feel sweet. The addition of Ace to the competitive pool has seemingly given him the ability to show off his fragging ability now that he has access to the AK-12. According to KenZ, his big performance would’ve come with or without the upgrade in firepower.

“While Ace is a great operator, Krazy has really come into his own over the last few months from an IGL standpoint to his aim and game sense,” said KenZ. “He's really come full circle from when we began in Challenger League and I think he’s proven he's one of the best support players in the game." 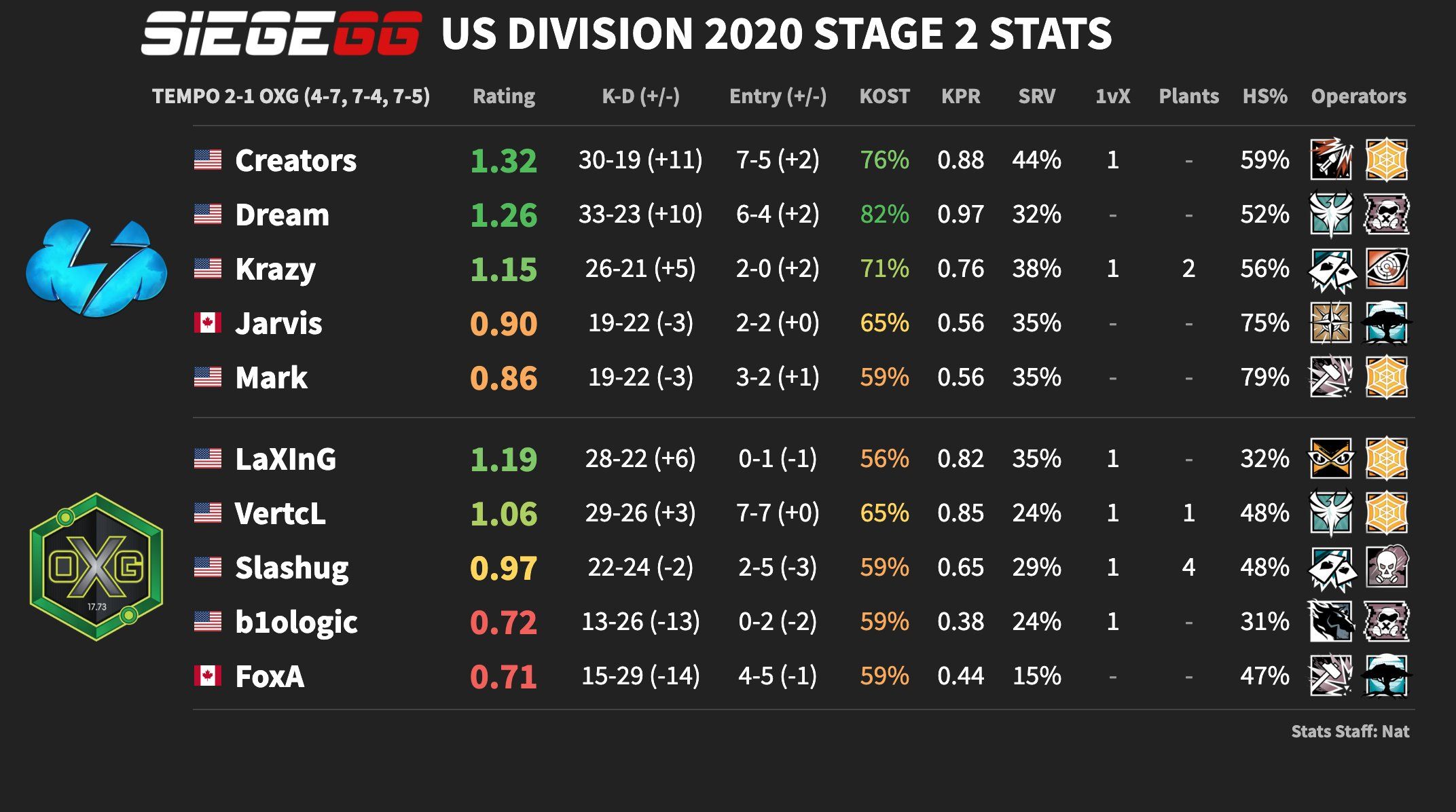 Since the start of the NAL, Krazy has been having one of the quietest-but-strongest seasons. He pulled off an extremely rare one-vs-five against the Susquehanna Soniqs with nothing but a nitro cell and an SMG-11. All in all, Krazy has hovered around a 0.90 Rating in near every series he’s played in the NAL, a commendable feat for someone usually on Thermite and Mute.

“So yes, while Ace is a good operator, Krazy's just nutty, dude,” said KenZ. “Seeing the things he does in practice everyday transfer to real matches is a real treat for me.”

On map one against Oxygen, it didn’t look good at the beginning. Tempo Storm went down 1-5, and fell 7-4. However, they didn’t crumble, they rallied, winning the final two maps 7-4 and 7-5 respectively. They started both Map 2 and Map 3 down 1-3 before turning on the jets and soaring to 7-4, 7-5 victories. This mental fortitude they showed has something to do with the newfound wealth of experience on the team, but KenZ also gives credit to Matt Wolf, their team psychologist.

“While the overall experience has helped deal with the pressure, there's always more things to learn and tools you can use to help deal with it, which is why I brought Matt our sports psychologist on board,” said KenZ. “I think we proved how composed we are on Maps 1 and 3 being down so far in the round count. This is something that we as a team work on very hard on and take very seriously. I think the outcome proves that. We know at the end of the day, we can go toe to toe with any team as long as we stay focused.”

“Our team’s strength is controlling the pace of the game,” said Krazy.

Another massive part of Tempo Storm’s early success has been the emergence of Mitch “Dream” Malson. Mostly known for his on-camera constant clapping, Dream has gone from clapping after the round ends to clapping the other team during it.

Against Oxygen, Dream notched a team-best 82% KOST and an almost unbelievable 0.97 Kills Per Round. Beyond his prowess, KenZ says with Dream, what you see on the camera is the same positivity he brings to Tempo Storm behind the scenes.

“What I will say about Dream is his ability to keep the team happy and positive is really important, his laugh is contagious, as I think the entire community sees from the post-round shots the guy’s presence just makes you happy. You see him smiling and clapping you just wanna give him a hug, haha. He brings that energy every day, every round, and we all love him for it.”

With the emergence and positivity of Dream, the mechanical excellence of Creators, and the veteran support system of RaMz, KenZ, Mark, Jarvis, and Krazy, Tempo Storm is looking like a very strong team so far. When other teams zigged and doubled down on young talent, Tempo Storm zagged and is bringing a ton of veteran savvy to the table.

“Between DnA, Ramz, Mark, Jarvis, Krazy and I, we have almost 25 years of competitive experience altogether, if not more with Dream and Creators almost finishing their first years,” said KenZ.

Next up for this upstart Tempo Storm roster will be another chance for them to prove how far they’ve come: a matchup with the mighty Team SoloMid. According to Krazy and KenZ, Tempo Storm is happy that they’ve come so far in the offseason, but isn’t satisfied until the task is finished.

“I just want to say thank you to all of our supporters, we see you on Twitter and in the chat,“ said KenZ. “We hope to make you proud this split. We still have a lot to work on and we look forward to showing you our final form down the line.“

When congratulated on his win against Oxygen after our interview was concluded, Krazy responded matter-of-factly, stating, “I wouldn’t say it’s a ‘big win’ until we get out of this group and into the Top 4.”