The Second Entry — Talking Week 1, Stage 2 of the NAL

Tempo Storm came storming into the second stage of the U.S. Division, DarkZero held strong as the top dog, but the viewership just was not there.

The NAL is back, and Week 1 started with a bang and ended with a whimper.

On Monday, DarkZero continued their Mini-Major winning form and crushed the Susquehanna Soniqs behind strong attacking halves and Kyle "Mint" Lander on Blitz.

In what's easily the biggest upset of the stage so far, Tempo Storm knocked off Oxygen Esports and looked extremely good while doing it. If not for some downright heroics by Gabriel "LaXing" Mirelez, the 7-5 Tempo Storm victory on Map 3 might have been much worse.

Wednesday's game brought promise, and a metric ton of rehosts. After what seemed like centuries, Spacestation Gaming prevailed over eUnited, 2-0. This wasn't your historical eUnited loss, mind you, for the boys in blue looked extremely strong and only lost the match by a combined three rounds.

Disrupt Gaming, too, looked to make a statement against perennial title contender TSM, but fell flat in Map 2 after Jason "Beaulo" Doty and Bryan "Merc" Werzek put on a show, combining for a staggering 45 kills in the 20 rounds played.

Stat of the Week

Get your laughs and memes in on eUnited while you can. It's clear they've improved over the offseason and are about to come for someone's spot.

How good are they? Well, they lost to the reigning Six Invitational champions, Spacestation Gaming, by three rounds; 7-5, 8-7. Why is this important enough to be the stat of the week? It's because of another stat: four Spacestation players had to pull off a 1vX in order to secure the victory. 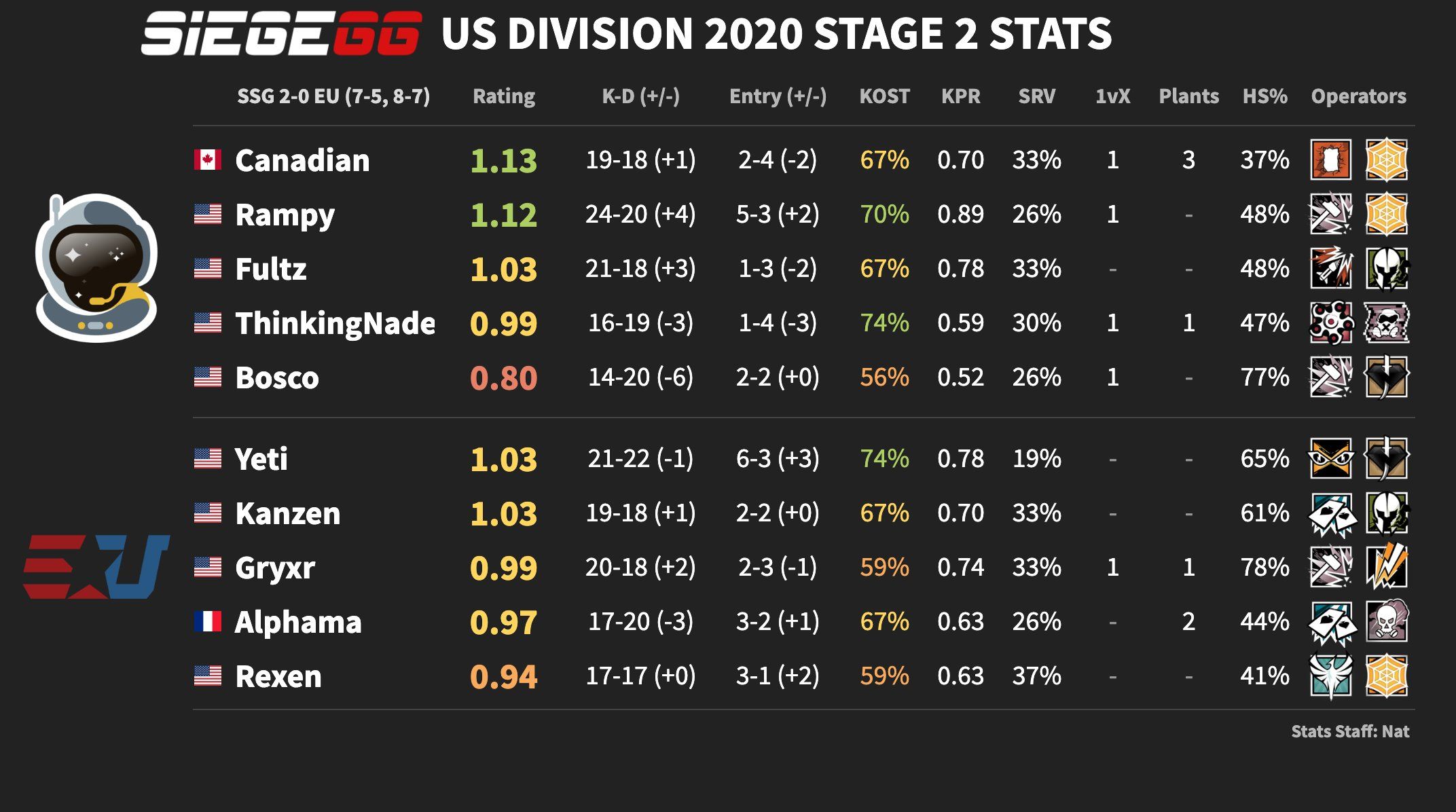 That's about as close as you can cut it. Spacestation obviously have some kinks to work out, but may have been a tad overemotional playing against Evan "Kanzen" Bushore, with whom they have some less-than-cordial history.

Beyond all the personal drama and the potential of the emotions clouding SSG's judgment, eUnited played extremely well, and if they could've closed out some important rounds, they might have peeled a victory off Spacestation.

Clips of the Week

It's impossible to have just one clip here. There's just no possible way to choose. So much happened, let's just talk about all of it.

First up on the list is Nathaniel "Rampy" Duvall's insane wallbang onto Yeti. There's no way that Rampy didn't have at least a sound cue here. That, or this is all part of an elaborate plan that the SSG support staff cooked up. With their level of preparation, you can't be sure if any seemingly-miraculous SSG play is luck or calculated.

Not to be outdone, DarkZero's Mint also had a heck of a week. In this round he showed off the power of one of the newest operators in competitive play, Melusi. Seriously, she has the T-5, a C4, incredibly powerful utility, and she gets to be a three-speed? It all seems like a lot, and if she isn't banned in the individual maps we can expect to see a ton more of her in the future. In fact, I wager it won't be the only Melusi clip we see in this section.

As if that wasn't enough great clips, Loviel "Velly" Cardwell was assaulted by his desk light on-camera. He needs to stop having so many hot takes, the fire spewed from his mouth is affecting the structural integrity of his light stand.

We know what you're here in the "Clips of the Week" section for, though. LaXInG pulled off the most difficult play in Rainbow 6 Siege -- the 1v5. Yes, Tempo Storm played it poorly. Yes, the typical start-of-the-new-operation wonky sound might have had an effect. LaXInG can't control that, though, he can only control what he does.

Perhaps the most impressive part of the clutch were the two kills with the pistol. Yes, it was poor coverage, but two surprised rifles should still beat one pistol. This is my early entry for play of the year, as it very nearly swung the tide in Oxygen's favor.

Storylines of the Week: Viewership and what can be done

There's a ton of actual Rainbow 6 to talk about this week. I'll personally have a more fleshed-out article on Tempo Storm sometime this week -- they were really impressive in their victory over Oxygen. EUnited are looking massively improved, DarkZero haven't skipped a beat from the Mini-Major, and if TSM can keep up their breakneck pace we could be looking at a classic of a match in Phase 2 of Stage 2.

However, the games weren't the main focus of chatter on Twitter and Reddit. Yes, social media is prone to dramatizing minuscule events, making mountains out of molehills, but this time it feels different. Something has to be done about the viewership, and it needs to be done fast.

Maybe the desk segments need to be sped up or shortened. Maybe the matches need an esports tab running in Uplay and on the main build of the game when you log in. Maybe we need to know the start dates and who will open up the season against who and what the groups are more than around 72 hours before the start of the stage.

Maybe the sound bugs need to be fixed so we aren't stuck in Rehost Purgatory. Maybe everyone needs to wear masks so we can finally kick COVID-19 to the curb and get back to LANs. Maybe we need to split the channel into multiple channels so it doesn't seem too daunting to get into for newcomers. Maybe there need to be tangible, in-game rewards for watching league play like there are for Majors.

Maybe all of it.

At this point though, you need to do something. I don't care what, do something. The game is still wildly popular and sells well on consoles, and PC player count keeps rising year after year, even with drops in players as the year drags on, it shoots up around the Six Invitational and leaves us with more than last year. Anecdotally, every single person I consistently play games with in my spare time plays R6 at least once or twice a month. It's a widely-beloved game.

I cannot and will not accept that this is it; that the game has reached its zenith, and is on a downward trend. I cannot accept that this is all that can be done when there are so many other things that are being done in other esports. COVID-19 shattered the chances at an NA LAN environment for this season of life, some loss of viewership is acceptable. No one crying out for some kind of response is completely unreasonable; there was always going to be a hit. No one knew it was going to be like this.

What isn't acceptable is allowing the consistent trickle downward, the slow bleeding of a thousand paper cuts. Drops in a well become a river if left unattended. Right now, it may not be, but our well feels unattended.

Who knows, maybe there are plans set in place to boost viewership. Maybe there's an entire plan to gift renown boosters in-game to those who watch. Maybe the NAL enters a bubble like the NBA and play on LAN and gets tons of viewership for being essentially the only safe LAN event right now.

If these dealings are happening in the shadows, it's time to make them public. You have a dedicated, rock-solid fanbase that's worried. They're concerned that all of the money they spent buying Pilot Program and R6 Share skins are going to waste as viewers drop to the level of World of Tanks or Black Ops 4. They're concerned that organizations might decide to leave the game they love if there's a downward trend. They're just... concerned, that's the mildest way I can put it.

In other times and in other situations, the concerns of those not "in the know" are often unfounded. That's not the case here. There's no reason a TSM game should be pulling under 10,000 viewers at any point in time. There's no reason to never break 15,000 viewers in the launch of a new stage; the first top-flight Rainbow 6 action in a long while.

Make it public. Make it known that you have a plan for this, make it known that you see what is in front of your eyes every time you turn on the broadcast. Come out with empirical evidence that these concerns are completely and totally unfounded, or that there's a plan to fix it. It's past time to ease the fears of an uneasy audience, ease them with facts, not platitudes, unless all you have at this time is platitudes. At this point, acknowledgment would be progress.

And in the case there isn't a plan... you might want to start thinking of one.

Have the new scopes changed the meta a bit? I understand why this question will never get answered, as most teams don't want to reveal their innermost strategies. I'm still very intrigued with how the new scopes fit into plans, seeing as how we saw DarkZero run the MPX Warden with a ton of utility on a Kafe 3F defense. Kaid is another interesting topic as well, do you run the 1.5x on the AUG or the 2.0x on the TCSG? There's tons to consider when the new scopes give certain operators more power in certain positions, or open up new angles that can be easier held.

Experience is king at the professional level. I don't think it's a coincidence that Tempo Storm and eUnited added experience to their roster (in eUnited's case, half of the players they added in the offseason have multiple seasons of professional experience), and they looked markedly improved. While older players get looked down on as not as mechanically skilled as some of the young gunners, veteran savvy is a real phenomenon. It cools nerves and thinks clearly.

The Soniqs' asterisk is gone, but don't be fooled by an early loss to DarkZero. Yeah, the Soniqs got walloped a little bit. DarkZero was still in their strongest form to date, and it showed. The proverbial asterisk is gone from the Soniqs performance, they were at full strength. This is, completely and wholly, a notch in the loss column. However, they shouldn't hang their heads about a loss to DZ, who look like a top three team in the world right now. Breaking into the top group is still possible for this squad, should they win out. They have the firepower and the brains to do so. Don't take them lightly, despite their struggle on Monday.

Tweets of the Week