APAC North Six August 2020 Major - Everything You Need to Know

With the APAC North Six August 2020 Major upon us, here is all you need to know about the format, teams, and prize money on offer.

APAC North will be the first subregion to play its mini-major, coming just two weeks after the first stage of the regular competition ended on the 4th of August. Concurrently running will be the APAC South Division's South Asia and Oceanic mini-majors, with their first games on the 6th of August.

All three majors will culminate with grand finals on the 9th of August, so here is all you need to know about the first one coming up -- the APAC North Six August 2020 Major. 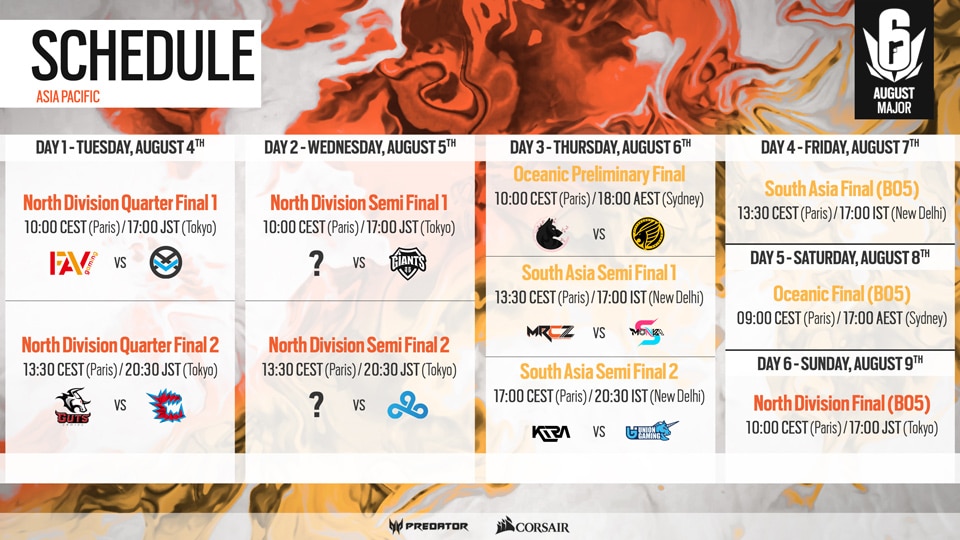 With six teams in attendance, the APAC North Six August 2020 Major will follow a format much like the inaugural Six Invitational in 2017. The event will see a single-elimination bracket, but will have a Best-of-Five (Bo5) grand final after the Best-of-Three (Bo3) quarter-finals and semi-finals.

As such, the top two seeds, in this case Giants Gaming and Cloud9, will receive a first-round bye and will play their first games directly in the semi-final itself. With the semi-finals set for the 5th of August, on the second day, this means that the two will be able to analyse their opponents relatively comfortably.

Meanwhile, FAV Gaming and Xavier Esports raise the curtain on the 4th of August, with a game against Giants Gaming awaiting the winner. Immediately after, domestic rivals Cyclops Athlete Gaming (CAG) and GUTS Gaming will play each other in the other quarter-final in hopes of setting up a meeting with Cloud9. 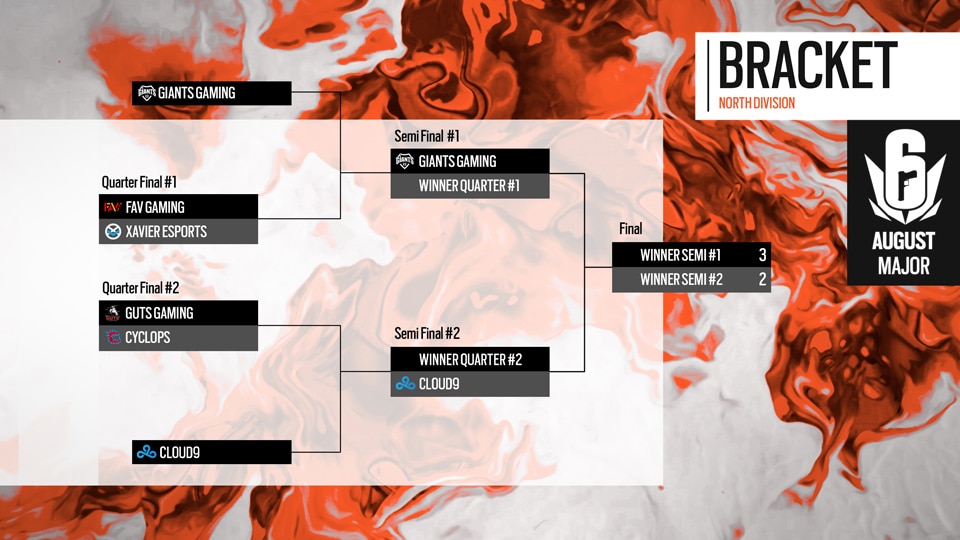 Each day of play for APAC North, namely the 4th, 5th, and 9th of August, will see the games start at 4 PM SGT (UTC+8). Games for the Oceanic and South Asian tournaments, on the other hand, will be played from the 6th to the 8th of August.

The Six Invitational Points will go towards qualification for the currently-tentative Six Invitatational 2021, with the winners of the Oceanic tournament getting 330 and the South Asian getting 275.

The top six teams at the end of Stage 1 of this season will be in attendance at this Six August 2020 Major, while teams such as Fnatic, NORA-Rengo, and Qconfirm miss out. 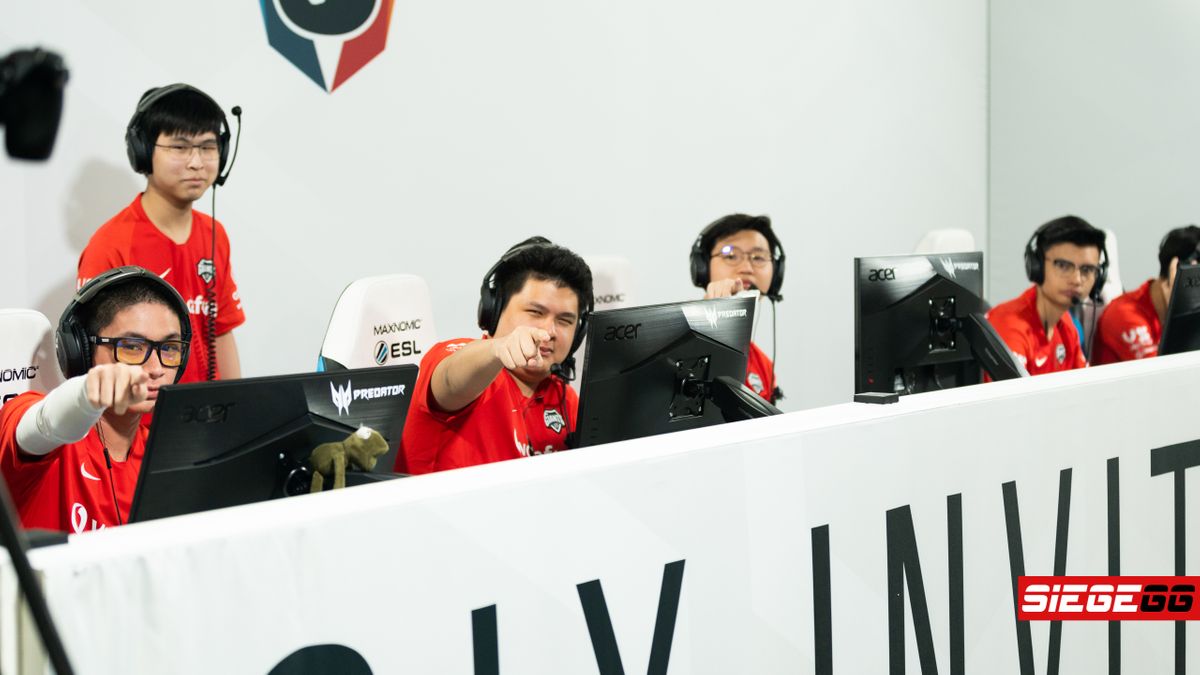 Hailing from Singapore, Giants Gaming goes into this tournament as the easy favourite to take top honours. After going 5-0 in the first phase and 4-1 in the second, it is clear that having had more time to work with their coach of GiG has worked wonders. Nigh-unstoppable so far, except for a 1-7 loss to Xavier Esports, Giants will be disappointed of anything short of an outright win.

Coming in as the second seed, Cloud9 has been seeing somewhat of a renaissance in its form. Having struggled all the way since its signing with the organisation in April 2019, the Koreans have finally rediscovered their Six Invitational 2019 form -- and better late than never. The climb may have taken a while for them, but it is clear that the Koreans will once again be a force to be reckoned with in APAC.

Third-seeded GUTS Gaming will be largely happy with its position, though will face a tough challenge against fellow Japanese team Cyclops Athlete Gaming. Nevertheless, the GUTS players will certainly be up for the fight and will be looking to spring a few surprises and cement themselves as the best in APAC. 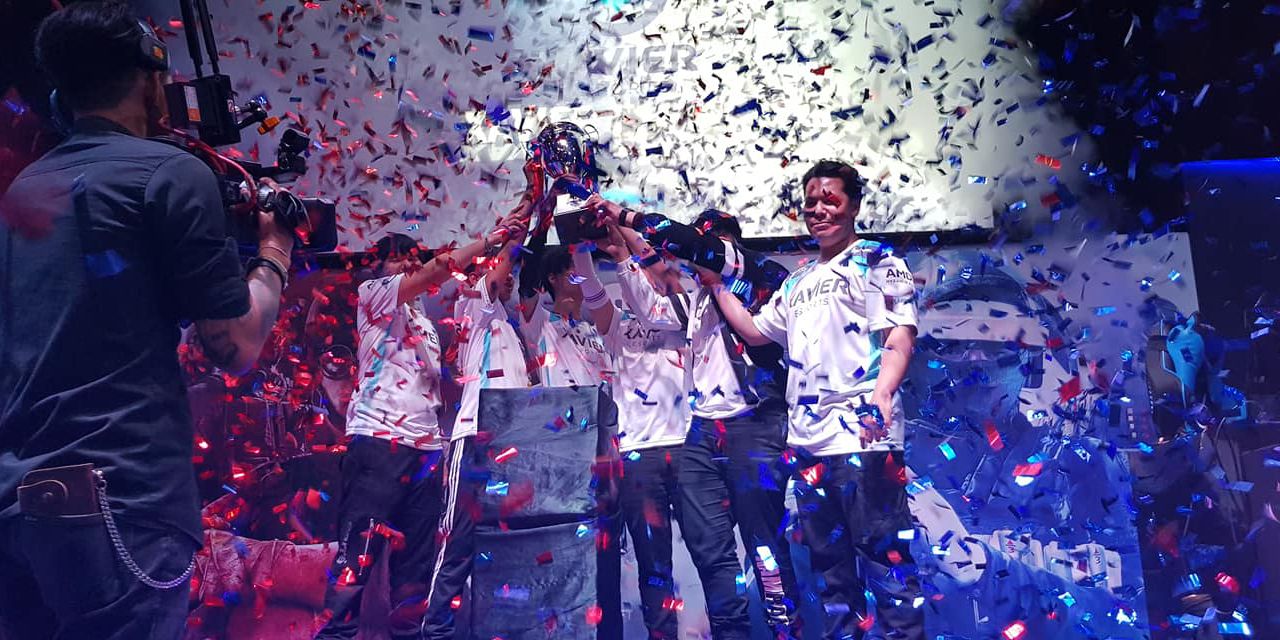 Coming in with a frenetic and often-unpredictable play style, the Season 1 Thai national champions will look to turn their local dominance into a regional one. A decent 3-2 first phase was followed up a flawless 5-0 second phase, including a 7-1 decimation of Giants Gaming -- the Singaporeans' only loss. With the Thai on the same side of the bracket as Giants, they could spring a nasty surprise.

FAV Gaming will certainly be feeling reasonably confident despite its fifth-seed, given that the Japanese team finished with a 3-2 record in the first phase and beat quarter-final opponent Xavier Esports in the first phase, while only narrowly losing in the second. With No2 on song and a wealth of experience as one of only four teams to have gone to an international tournament, FAV cannot be counted out.

Sixth and last, but certainly not least, is Cyclops Athlete Gaming. Having had a relatively tough time so far this season, the Japanese team is no lacking in talent compared to the other five teams here. Having pushed Giants to the brink as well, there are certainly positives for XQQ to focus on for his team, but also areas for improvement. A year on after its Six Major Raleigh appearance, CAG will be hoping to be firing on all cylinders as it comes into this year's edition as the underdog.

Broadcast and talent details have not been announced as of yet, but it is likely that much of the APAC North division talent will be reprising their roles. Furthermore, with talent concurrently tweeting about their travels to France, it seems that this mini-major will see the launch of the much-awaited Paris studio.

Make sure to tune in for the games, starting tomorrow on the 4th of August at 4 PM SGT (UTC+8), as APAC sets out in search for its Asian, South Asian, and Oceanic champions. Also check back here for more coverage and follows us on Twitter for instant updates.