The Spain Nationals' second season came to an end this weekend, so here’s a rundown of everything important that happened and the teams involved.

Lots of things have happened in the Spanish community since the start of the season. And finally, after almost six months, the brick -- how the trophy is known in Spain -- has a new owner.

The previous edition ended in x6tence's hands, a roster that had people dreaming about an Spanish team making it back to the top-flight of Europe. The roster led by Wesker showed plenty of promise, however some internal problems caused the team to disband despite the squad being so close to a Challenger League spot -- twice. 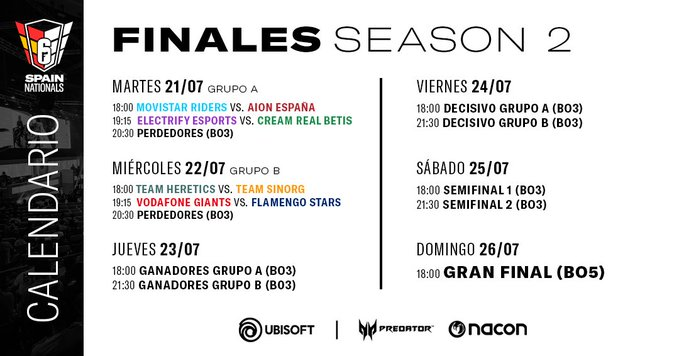 Group A had been graced with the presence of the favourites, Movistar Riders, led by Wesker. The team had kicked things off with a surprisingly tough game against AION Spain, with some of the Riders' players later saying that they had not expected to fight against such a solid team and ended with a 7-4 scoreline.

The second match featured Electrify and Cream Real Betis. Despite Cream RB finishing in fourth place, Electrify's current streak, plus Cream having to play with its coach in place of EscrivaZ, made Electrify's roster the fan favourite. And the fans weren't wrong, as the game ended in a 7-2 win for Electrify.

The lower bracket match then saw AION and Cream RB take each other on, offering us a very close contest. AION surprised everyone, winning 7-4 on Villa, Cream's main map. However, Cream won on Clubhouse, forcing the third map of Consulate, which was won by AION, 8-7.

Two days later, Electrify and Movistar Riders faced off for first place in Group A. Against all odds, Electrify shocked the Riders, winning 2-0 (7-3 on Clubhouse and 8-7 on Coastline, one of Riders' favourite maps). This forced Riders' to play a third game in order to advance to the semi-finals.

This time AION didn't put up a great fight. The first map played was Clubhouse, and this time the Riders won by a 7-0 margin. The second map was a bit closer, although the AION players didn't give many problems to their opponents. Despite ending the first half in a 3-3, the match was decided when Riders went to the defensive side. The game ended in a 7-4 for Riders, as they took second place.

Despite the surprises seen in Group A, the biggest matches were seen in the second group. The first match featured Team Heretics and Team SinOrg, with the former the main candidates to take the first place, especially after p0Lo's signing. However, TSO managed to win by 7-4 on Club against an unrecognizable roster that clearly had not adapted to p0Lo's addition.

The following game was the most awaited one, as Couto, Giants' new signing, faced Flamengo Stars, his previous club, in his first match with his new team. Both clubs put up a great fight, however the half-Brazilian half-Spanish roster of FS won (8-6). This meant that Giants and Heretics would play in the Losers’ match for a place in the semi-finals.

However, there was a twist in the tale. CABAL took the decision to invalidate the Giants vs Flamengo result as there had been some problems with batfat's MOSS. Hours later, FS would fall against Heretics (7-1 on Club and 7-3 on Villa), meaning that FS efforts had been wasted.

The Winners match was finally set to be played between TSO and Giants and was a quick one, as both maps ended in 7-1 wins for Giants. This meant that the decider would be between Heretics and TSO, this time in a Best-of-Three format. Heretics got to win the first map (7-3), but TSO returned fire with a 7-5 win on Villa. The decisive map was played in Kafe, with Heretics starting on defence as they had a better round difference (12-10). Here, the Heretics knew exactly how to take advantage of that as they won all their six defences, killing the game in their next attack. Kuriboh's clutches with Smoke, both on Oregon and Kafe were vital in Heretics' success in the Group Stage.

Despite the surprises seen in the Group Stage, the Finals bracket ended to be like almost everyone expected it to be: Electrify vs Riders and Giants vs Heretics. The only surprise was the order of the teams, as the most of the community had expected both the Riders and the Heretics to win their respective groups.

Saturday kicked off with a great match between Heretics, one of the two fan-favourites, and Electrify, who had previously defeated Movistar Riders in a comfortable fashion.

Starting on defence, Heretics won the first round on the Italian map thanks to a Juka 4k that left Welshy alone and with no time to plant. The Heretics knew exactly how to keep up the pace in the following two rounds, winning in Library and Trophy Room. The fourth round also ended in Heretics' hands, this time thanks to a sakke 4k.

Electrify didn't wait much longer to answer, as they won the following two rounds, leaving the match in a 4-2 just before swapping sides. However, Electrify couldn't equal Heretics' pace as the vastly more favoured roster won 7-4.

The second map, played on Oregon, followed a similar script. Now on attack, Heretics won once again the first four rounds, once again having a solid Montagne controlled by Kuriboh. Electrify reacted with two rounds on attack, with the last one being a rush led by Juampa.

Nevertheless, Electrify exhausted its battery once again. The Heretics finally won the game and secured their place in the Grand Final after taking Oregon by a 7-3 margin.

SF #2: A Clásico Before The Final

Movistar Riders and Vodafone Giants played for the second place in the Grand Final, with great history between the two sides existing not only in Rainbow Six: Siege but also in every esport they compete in. This was, thus, effectively a Barcelona vs Real Madrid match in Rainbow Six.

The game kicked off with the Riders showing great strength as they won their first four defensive rounds. The first round for the Giants only came after an attack onto Archives and was followed with another win, this time on Lobby. These two attacking rounds gave Giants some extra hope, but Foskito gave Giants a reality check as he got three kills in the following round.

Two rounds later, Riders got to match point, 6-3. Despite Giants surviving the first one, Riders closed out the first map with a strong attack onto Garage that left Curr3nsy in an almost impossible 1v4 post-plant situation.

The second map of the series was Kafe, the Riders’ pick. The Russian map is without a doubt the best map in the Riders' map pool, and so they were the favourites to take it. However, a rejuvenated Couto -- who had only got three kills in the first map -- was key, alongside Iluzjonist, during the first four defences, with each getting seven and eight kills, respectively. These were very important, especially in the first round, which ended with a Iluzjonist clutch. Riders reacted just like Giants had on Consulate, as they won their final two attacks, highlighting the last one, as Billordo saved his team in a 1v2 situation.

The Riders' positive streak continued, though, once the sides swapped, as they drew level at 4-4. Despite a quick answer from Giants, the Riders killed their hopes swiftly as they won 7-5 and moved onto the grand final.

After all the ups and downs, both Movistar Riders and Team Heretics had fulfilled everyone's expectations and reached the Grand Final. This time the focus was largely on two players: Wesker, from Movistar, and sakke, from Heretics.

The fact that Heretics banned Coastline -- a ban that surprised some, in contrast to the Riders’ ban of Villa, which they had not touched in the entire season -- gave Theme Park the chance to appear in the Finals for the first time. After that, both teams were set to play on Oregon, Consulate, Kafe, and Clubhouse.

Kicking things off was the first map, Theme Park. The first half was an excellent display in defence by Team Heretics, who won every one of its six rounds. The Heretics even defended Lab/Storage, which was only used twice in the entire regular phase and had never been won by the defenders. A single attack was enough for the Heretics, which came in the eleventh round, and the map was over.

The Riders seemed to give a proper answer to Heretics on the second map as they got off to a promising start. As they won the first two rounds, Heretics finally cut down their streak with a solid attack onto Kitchen/Dining. The first half ended in a draw and, despite Riders winning one of their attacks, the Heretics’ aggression and ability to overcome any adverse situation were key in their final win.

The third and eventually last map of the series followed a script similar to the one we had seen on Oregon. After a very close first half, the Heretics started to win rounds when defending. The eighth and ninth rounds were the most important, as both finished with Riders losing after having been in 4v2 situations. The first one ended with Kuriboh killing the planter when the timer was zero, while barozj completed a 3k clutch in the following round. Despite the struggles, the Heretics finally won the map in the following round.

Months after the creation of this ambitious project, Team Heretics has finally succeeded at its first try. The win is much deserved, as the team did not concede a single map since the start of the semi-finals; in fact, the only team that beat them this week was Team SinOrg -- two times -- on Villa and Clubhouse. Heretics had surprised everyone with its aggressive style, having shown a lot of confidence, especially in individual duels. Safe to say, no one had expected this Team Heretics. The Finals MVP was barozj, as he finished the Grand Final with a KOST of 87%.

The Spanish roster will thus play against the following teams in the upcoming Challenger League:

Furthermore, Rainbow Six Spain has announced that there will be another edition of the Drone Cup, with more Spanish action to come.