As young gunners stepped up to the plate, the top four of the US Division were completely jumbled in a wild week.

There's little to no dispute here in that regard, from a purely spectator standpoint, and the only thing that really comes close is Echo's competitive quarantine. Not needing to ban Echo almost all the time has led to a variety of defensive strategies, a welcome boon. Additionally, the Bo3 format gives teams more rounds to experiment without fear of losing points towards making the major because of one off-meta hold.

All four of the US Division's week two matches were close, hard-fought games, despite the multiple 2-0 scorelines. Two out of the nine maps played went into overtime and were decided in 8-7 scorelines and four of the remaining seven games were decided by a 7-5 scoreline -- the closest we can get to an overtime scenario.

Let's break down some of the things that happened.

"The Greek Freak" has done nothing but dominate so far in the USD. After coming from Rise Nation to DarkZero Esports, he's done nothing but improve. According to Zach "DPZ" Matula, CEO of DarkZero, he could be the best in the world when he's done.

"Talent is a critical but overrated component of becoming an elite player," he said in an email to Siege.GG. "Aside from his natural-born gifts, Paul possesses a tireless work ethic and a stoic leadership quality which I believe gives him a rare shot at earning a place amongst all-time esports greats."

"The amount of work he (Hyper) is putting in is unreal," said Kyle "Mint" Lander during the on-broadcast interview with host Jacki Jing. "The growing up is unreal. He’s first up, he’s always watching VODs, he came up with all our Kaid plays on Villa."

So far this season, Hyper has been the best player in the US Division. The stats prove that, and the mechanical skill you can see with your eyes proves that. Hyper isn't the cause of DarkZero's success, but rather the catalyst; his success has thrown gasoline on a spark that's been waiting to turn into a blaze for quite some time.

Clip(s) of the Week

There were just way too many good clips to choose from this week, so we're going to include them all.

In the first, Franklyn "VertcL" Andres Cordero just narrowly missed shooting the C4 out of the air. As a consequence, Spacestation Gaming took the round. Oxygen and VertcL would have the last laugh, though, as they defeated the reigning champions 2-0.

Disrupt Gaming has shocked the North American scene with its fundamental stratgies and combined mechanical skill. This was extremely evident on Clubhouse, where a nifty bit of observing caught a grenade from below that led to the taking of the CCTV wall, which led to a flurry of kills. Disrupt won the match 2-1, and will face off against Spacestation for a spot in the US Division's top four group.

Now, there weren't just failed C4 snipes this week. The Frenchman Leo "Alphama" Robine absolutely rinsed this C4 out of the air. Well played to Alphama for the good shot and to the observer for catching this instense moment and display of incredible mechanical skill.

Storyline of the Week: DarkZero's Upsurge

Wednesday night's climactic finale between DarkZero and TSM became the defacto match for the top spot in the US Division after Spacestation fell to Oxygen.

Predictions for the game from casters, the SiegeGG formula and analysts favored TSM by eight predictions to three for DarkZero. The games, though, did not turn out that way.

DarkZero did not dominate TSM despite a final map score of 2-0 -- far from it, in fact. The first map, Villa, went to overtime and Theme Park went all the way to the final round of regulation. What this means is pretty simple; by virtue of Spacestation losing and DarkZero beating TSM, the race for the top spot in the US Division is officially open for business and objectively, DarkZero leads the pack after winning their group. 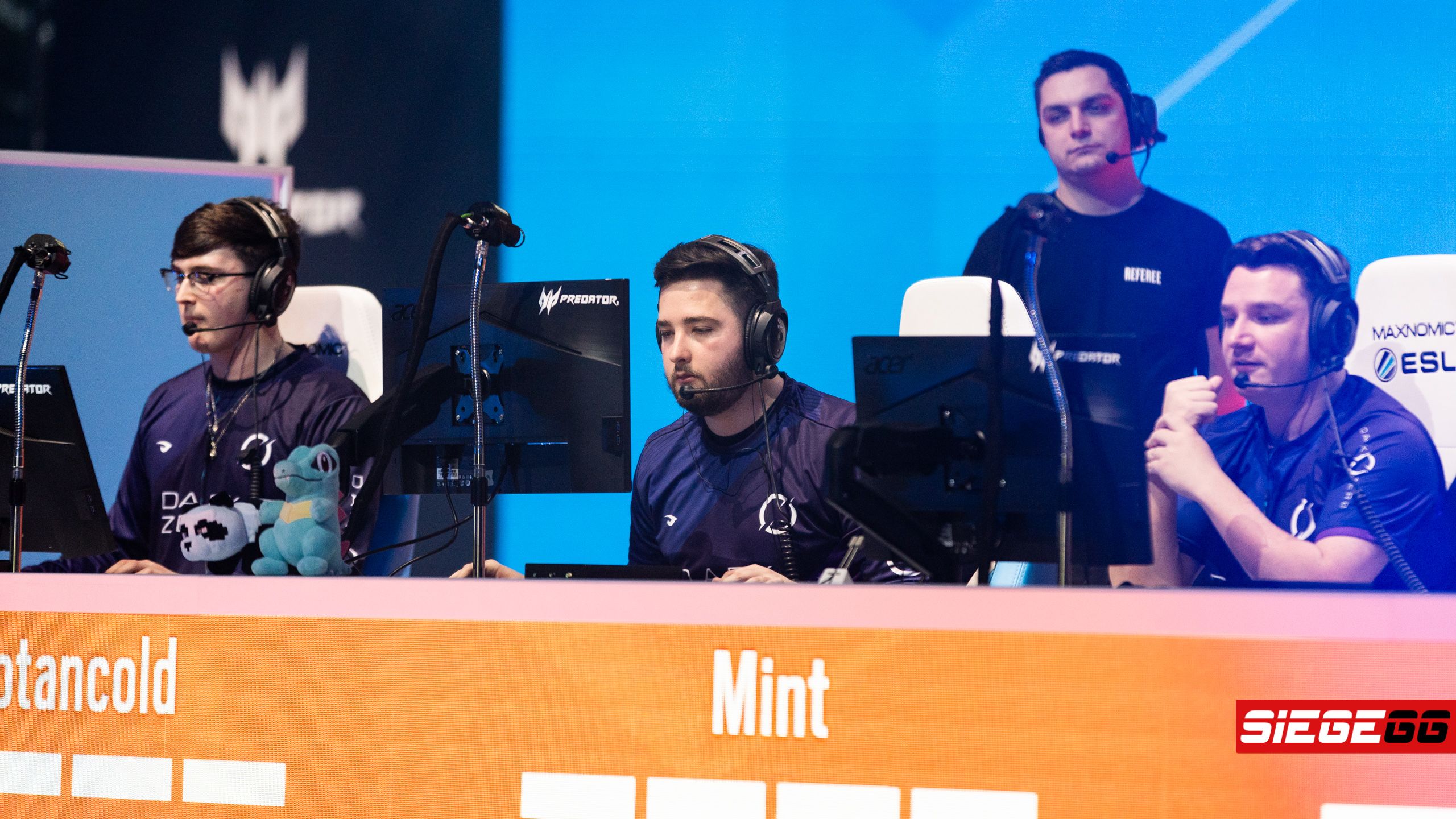 Spacestation Gaming's players are the reigning world champions and North American Pro League champions, yes. TSM placed higher at the Invitational and beat out DarkZero in the final placements in Season 11 of the Pro League, yes.

But that was then, this is now. We still take the past into account, as results within the past six months matter. In this manner, DarkZero has the pedigree argument over Oxygen, despite Oxygen taking out the reigning champs.

Taking everything, the past and the present into account makes DarkZero the frontrunner in the US Division. The Season 10 Finals grand finalists are poised to make another championship run. It is not by much, it is not a blowout, but it's clear that it is DarkZero's spot to claim or lose. They're locked into the top bracket for Stage 2 and now the pride of cementing themselves as the number one team in the league is on the line next.

Monday was stolen by the Susquehanna Soniqs' David "Iconic" Ifidon, Jack "J9O" Burkhard, and Disrupt Gaming's Nick "njr" Rapier. Lots of people with in depth knowledge of the Tier-2 North American scene have been telling everyone to watch out for the next generation, and they were correct and then some.

There's no denying that the new generation of superstars are beginning to blossom in front of our eyes. "It seems every 'new-generation' pro has one thing in common, mechanical skill," said US Division caster Samuel "Stoax" Stewart. "I've been blown away by their ability to fight through situations I thought to be a death wish."

On the post-game interview, Disrupt captain Zachary "Nyx" Thomas said, "I think njr is going to be one of the best entry fraggers in all of North America."

I enjoy watching eUnited, I truly do. I appreciate that they're a demonstrably different team in a league and meta where everything can feel very similar, and in a game where playing the meta is often the biggest key to sustained success, they're unique.

They're an extremely mechanically talented group of players and they don't lack intelligence -- there's a method to their madness. They need to find a way to win some games so they can justify their playstyle, however. Flying by the seat of your pants and eschewing traditional wisdom is fine if you are winning even a moderate amount. So far, that hasn't been the case for eUnited. The team needs to put something on the board soon to justify the way it plays the game.

Oxygen's flexibility is their biggest strength

The immortal Bruce Lee once said, "Adapt what is useful, reject what is useless, and add what is specifically your own."

Oxygen is looking better than ever, and it's all thanks to the team's adaptability. Sure, some players have to run support, but it feels like every single player on this roster can have game-deciding moments. Oxygen's strength lies in finding that player who is on fire and feeding resources into him. If Davide "FoxA" Bucci has a tough day, like he did against Spacestation, that's fine, because VertcL and Spencer "Slashug" Oliver are there to pick up the slack. They move like water -- like H2O -- and are hard to predict.

Most Dangerous Animals in Siege

3. Bosco in any 1vX
2. Braindead Aimer in Quals
1. Ranked kids playing for an e-date / friend request

Playing OXG in an hour for a spot in the winner's group. Be there 😎 pic.twitter.com/EgtteQggOM

Catch the next set of games starting at 6 PM EDT on the official Twitch and YouTube channels on 6 July and follow us on Twitter for more coverage of the US Division and other leagues.