With the Six Masters 2020 Finals set to begin in a few hours, here is all you need to know about the premier Oceanic tournament.

The Six Masters is the premier Oceanic national tournament and sees the top teams in the ANZ (Australia and New Zealand) region compete to become the regional champions; a title Fnatic has currently claimed for the last two years running. Now, as the league opens up with Fnatic withdrawing from the 2020 season and the top-three set to head to the Six August 2020 Major for Oceania, here's what to expect from the region's nationals.

Kicking off at 5 PM AEST (UTC+10) on 3 July, the Six Masters 2020 Finals will be played across three days, with the four-team double-elimination bracket as competitive as possible to ensure that only the best team will take home the title of Oceanic champions. 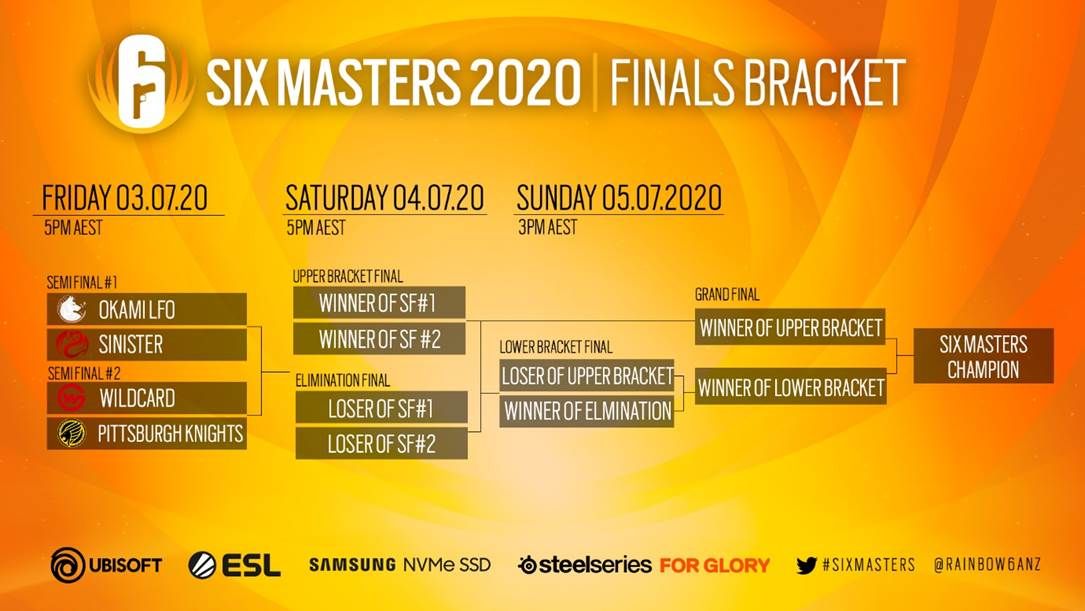 There will be a map advantage for the Upper Bracket team in the grand final, however, but there will not be a bracket reset.

Aside from the Grand Final itself, however, the Elimination Final will be the tensest game to watch, for the loser will miss out on a chance to qualify for the Six August 2020 Major Oceania. The winner, on the other hand, will proceed compete in a 'Gauntlet' with the two upper bracket teams. The second and third ranked teams at the end of the Six Masters 2020 Finals will thus compete in a Bo3 match, with the winner of that match progressing to face the Six Masters Champion in a Bo5 grand final.

After appearing at both the Six Invitational 2020 and the Season 10 Finals (coming within one round of knocking out the eventual champions in the latter), Wildcard is easily the most experienced team in the tournament. However, after a shaky Season 11 of the Pro League that saw the team need an immense rescue-job, it seems that things are looking up once more.

Near to the end of the season they had replaced NeophyteR and Derpeh with Gio and Pat, leading to a map victory over Fnatic, two wins against eventual second-placed Elevate, and a drawn map against third-placed Okami LFO. This then translated into a searing run through the online Six Masters 2020 phase, which saw the team win thirteen out of fourteen games (losing just one to eventual fifth-placed LFO).

Having added Vincere and Derpeh to the roster after the Six Invitational 2020 and the end of Season 11 of the Pro League, respectively, Team SiNister has gone from an oft-dismissed team to an absolutely viable title contender. While the team only had been able to secure a mere one point after eight maps at the halfway mark in Season 11, the second half saw SiNister win every one of its six matches -- a feat no other team in the league achieved.

Thus having propelled itself from dead last to a close fifth, Team SiNister then set its sights on the Six Masters 2020 online phase where it continued its roaring momentum to collect 30 points from 10 wins. In fact, of the 14 games played, the four losses had been to eventual league-toppers Wildcard, Season 11 second-seed Elevate, and Six Masters Finals-qualified Okami LFO.

The region's ever-consistent number three team previously known as Mindfreak, Dark Sided, and Corvidae has finished third-fourth in every Pro League season since Season 8 as well as at both prior Six Masters tournaments. Now with Fnatic out of the picture, this may be the team's chance to finally push into a grand-final and perhaps secure an organisation, especially after its partnership with North American brand Okami for exposure.

Okami had finished the online phase of the Six Masters 2020 just three points behind Team SiNister, having never really had been in danger of missing out on qualification. Having a very respectable nine wins and five losses, Okami will certainly be in with a shout at making it all the way, as a Bo3 format could allow the team to overcome some of its shortcomings in the shorter variant of the game.

The roster previously known as Homeless had made it into the Pro League for Season 11 after finishing ins second in Season 10's Challenger League. Since then, it surprised some in the Pro League by besting FURY, but it has had difficulties finding a permanent player as Juicy, Arlo, and JoeyG each got increasingly worse ratings, with JoeyG finishing with the second-worst rating in the whole of APAC at 0.59.

The team made it to the Six Masters 2020 Finals by an absolute hair, after having tied with LFO and Ferox Esports on points but having had enjoyed a better mini-league tiebreaker record against those two teams. Up against Wildcard first off, things will be far from easy for the roster, but its recent roster stability and a healthy dose of the perfect storm may just give the Knights a lethal edge.

The net prize pool for the league is A$50,000 (approximately US$31,900), with the following breakdown for the four teams qualified for the Finals:

Previously, a number of other national tournaments have also taken place in Oceania:

Offering A$25,000 followed by A$46,000 in prize money, these two tournaments different immensely from each other and the 2020 league in format. The 2018 league saw the three top ANZ teams join NORA-Rengo at a LAN event in a single knockout tournament in which Fnatic took the grand-final in a 2-1 scoreline against NORA while the 2018 league saw a 12-team online group stage move into an eight-team LAN tournament, also won by Fnatic against 0RGL3SS (now Wildcard Gaming), 2-1.

Both the ANZ Cup and Invitational took place when APAC had just been set up as a Pro League region so acted as a stepping stone for many into the world of competitive siege with a combined total of A$15,000 on offer for the tournaments.

The Oceanic Cup, however, was notable for it being the first major domestic defeat for Fnatic as the now-Wildcard Gaming roster had established itself as a strong regional challenger. Unfortunately for them, however, this event was not broadcast live out of respect for the victims of the Christchurch mosque shooting which had happened the day before the event kicked off.

Of the previous champions, four of the players -- three on the high-flying Wildcard Gaming -- will be looking to add another domestic title to their stable, while syliX and Fluxx will be hoping their coaching will net them another title as well. Former Wildcard Gaming player Derpeh, now enjoying a resurgence on Team SiNister, will be equally eager to take his former teammates on and perhaps steal a title away from them.

Catch all the action on the official Rainbow6 Twitch and YouTube channels, starting from 5 PM AEST (UTC+10) on the 3rd and 4th of July, with the games starting at 3 PM AEST on the 5th.