Project Prisma was created back in July 2019 and the first season covered the Six Major Raleigh. Now, a year since its creation, Project Prisma has partnered with DraftBuff in order to create the first open Rainbow Six: Siege Fantasy.

The partnership was announced on the 12th of June and it included a short video about what you can expect from DraftBuff.

As the DraftBuff Rainbow Six Product Manager, Candor, says in the video:

DraftBuff is a free social Fantasy esports application that can be found both on iOS and Android. It has other titles, but we’re here for Rainbow Six: Siege. It doesn’t include any kind of betting system, so you won’t find anything related to that in the application. Everything is completely free, the only requirement is to have fun.

DraftBuff has been delivering esports fantasy experiences for over two years now, and their team has now finally joined the Rainbow Six: Siege community. The application gives you the chance to compete in global leagues that feature other titles, such as League of Legends, Call of Duty, Overwatch, and CS:GO. You have multiple options to enjoy DraftBuff’s experience: 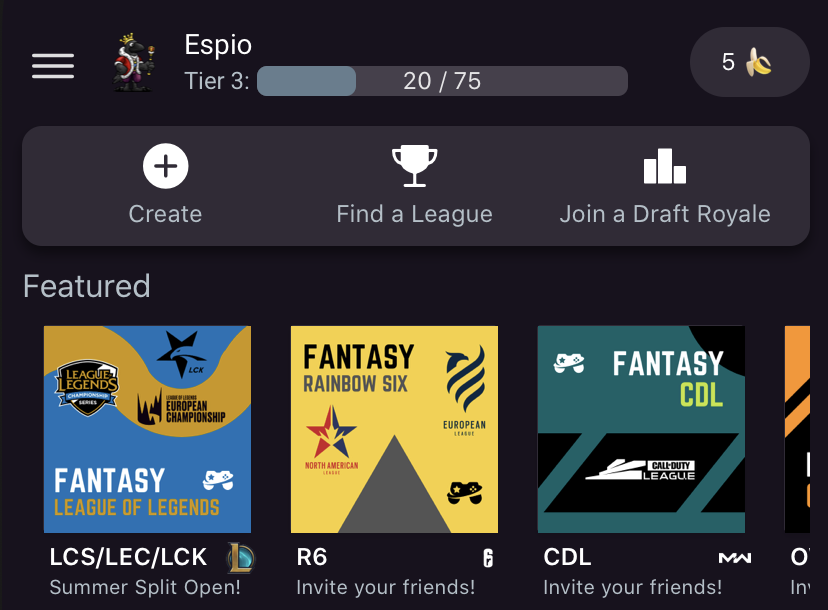 Once you opened the app and successfully created a user, you must press “Find a League”, as shown in the picture. 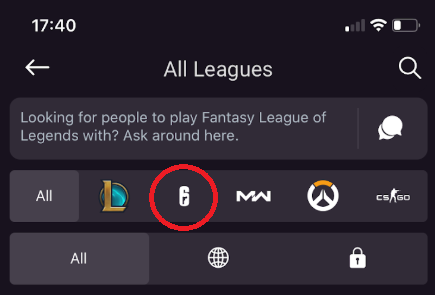 The app will give you the option to join any kind of league, which includes the titles that we mentioned just before. In order to join a R6S league, you must press the R6S logo. 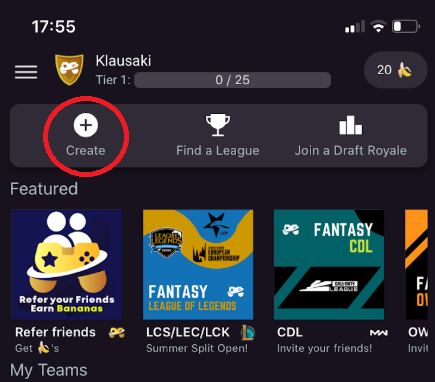 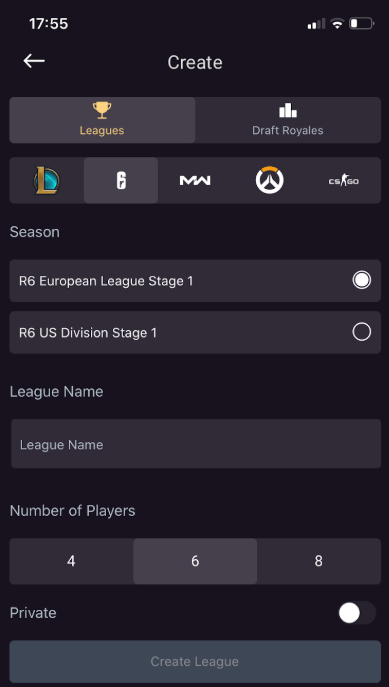 Once you have done this, you will have to choose the tournament (European League or North American League), a name for the league and a number of players, which can be 4, 6, or 8. You can also decide if you want your league to be private or open.

If by any chance you don’t have anyone you know to play with, you can always look for people in the application chat or for an existing league that has space . You can also use social media, such as Twitter to find new leagues.

The idea behind Project Prisma and DraftBuff is to provide the users with two types of formats: Leagues and Draft Royale. Let’s have a look at both of them:

Currently, Leagues is the only format widely available. The users in the league basically builds their own roster, just like a professional team would do. A few days before the kick off, the participants must create a draft to choose their players. The members of the league will be able to trade players or to sign free agents when the transfer market opens. The points will be given according to the punctuation that each player gets in each game-week.

The Draft Royale format is different. This kind of competition is closer to the previous experience delivered by the early tests of Project Prisma. The main difference between both formats is that, in a Draft Royale system, you can change your roster on a weekly basis, while in the League format you build your team in the week previous to the competition. This means that in this format, you have the option to change players depending on the game-week or their performances during the season. Check the links below to be part of the SiegeGG Draft Royale:

Join our US Division Draft Royale, or

However, despite this being the closest experience to Project Prisma, it will not include features seen in their early tests such as accolades, league points, and coach picks. Nevertheless, in the video attached to the previous tweet, it’s said that these features will come eventually, just not in this build.

As we previously stated in this article, DraftBuff is very easy to download. It’s available in both iOS and Android. You can find the links below:

Download the DraftBuff app on the Google Play Store and the Apple App Store.

At the moment, DraftBuff only includes the two biggest competitions in the R6S scene: the North American League and the European League. However, the plan is to expand to APAC and LATAM in the near future, and even some national leagues. Project Prisma already delivered a national league experience, as they created a Benelux League S5 fantasy league.

Both competitions (the European League and the North American League) will begin on the 22nd of June; until then, you have got time to create or join a league and build your own roster!