The North American League is set to kick off next week on the 22nd of June, so here's all you need to know about everything going on with it.

The group results were seen on stream during the draw:

Earlier today in a new blog post, the North American League also made a number of announcements related to the start of the league.

The most notable news received today was the announcement of the talent who will be spearheading the broadcasts from the new FACEIT studio in Las Vegas. The list includes both veterans of the R6 casting scene, as well as a few fresh faces who will be given a chance to shine on a big stage.

The casting roster is comprised of two veteran duos of Kix & Interro and Blu & Stoax. These pairs have headlined Siege's biggest events for the past year and require no introduction.

The analyst desk is highlighted by Velly, who most recently served as a desk host for the Six Invitational. He is joined by Jacki Jing who burst onto the Siege scene by hosting the US Nationals Finals in 2019, with a strong reception by the community. Finally, Jesse Chick rounds out the analyst desk. Jesse has long served as a caster in the North American tier-2 scene, and most notably was hired as a commentator for Dreamhack Montreal 2019.

To summarize, the North American broadcast lineup will be as follows:

Alongside the talent announcement came a broadcast schedule. The US Division will act as a headliner, with broadcasts on Mondays and Wednesdays starting at 6PM Eastern US time. On Fridays, the Canada division will start in the same timeslot, and after it ends US and Canada challenger league are listed on the broadcast schedule. It is unclear whether these Challenger League games will be broadcast by community members or the main studio team. 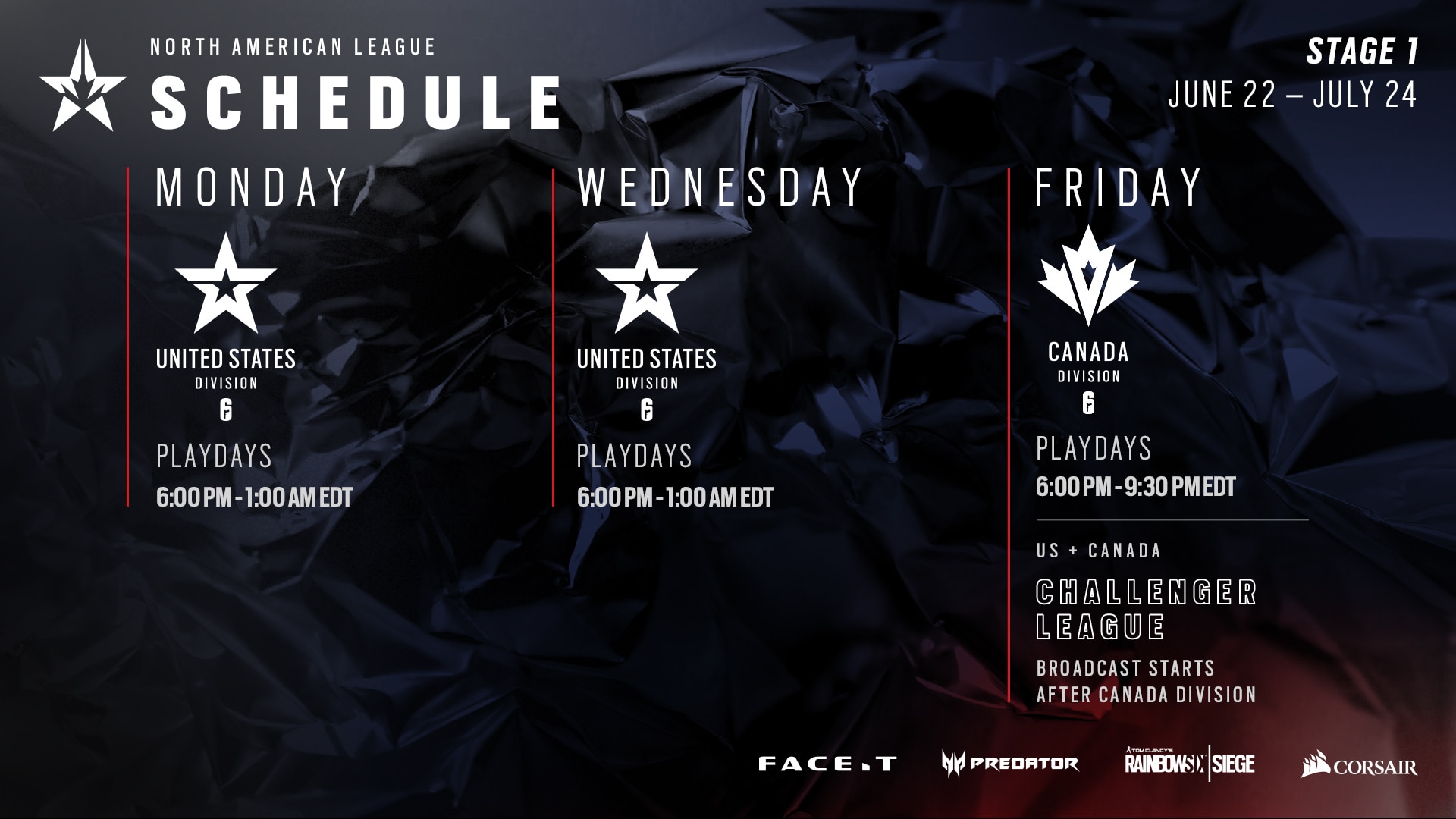 Cosmetic Rules - A long-awaited change, the North American League has announced a fundamental change to the rules surrounding which cosmetics are allowed in competitive matches. The league has moved to a whitelist format (previously used a blacklist), where all skins are banned with the exception of a select few. Aside from the default skins, the only allowed uniforms and headgear are Pilot program skins (Phases 1, 2, and future phase 3 skins) and Pro League 'Gold' sets. Weapon skins and charms are unaffected by this rule.

This is a big improvement in the eyes of many Pro Players who have been complaining about perceived advantages that certain skins can give due to visibility differences.

Map Pool - the official North American League map pool was announced to be:

Operator Pool - As expected, Iana and Oryx will be allowed for the upcoming season of the North American League.

For more, be sure to keep an eye on SiegeGG's coverage of the North American League!