After the team announced their departure from Team oNe a few days ago, new details have come to light about the details of their separation and a legal battle that surrounds it.

Following a legal battle between the players and organisation, the ex-roster of Team oNe has agreed to rejoin the oNe organisation with the exception of SKaDinha who will be replaced by Rappz.

With great satisfaction, we announced that we have reached an agreement with the line-up to continue the Rainbow Six: Siege project! 🔥

The magic continues! The wizards continue! 🧙

After bursting onto the scene last year, the young roster of Team oNe eSports suddenly announced their departure from their organisation earlier this week after a third and eighth-place finish in the Pro League and an attendance at two separate Minors. Now, thanks to a report by ESPN Brazil, details about exactly why they have made this move have come to light.

The player’s of Team oNe allege that the organisation currently owes the players ~R$288,000 (US$55,000) in missed reimbursements, wages, and winnings since the players joined the organisation in November of 2018 including missed winnings from their Challenger League Season 9 and BR6b league victories, as well as from their Pro League Season 10 finish.

As well as this, the players have brought up numerous complaints about the team’s gaming house in São Paulo, alleging:

These issues were reportedly the key reason which led one of the team’s core players of Luiz "SKaDinha" Salgado to exit the team in November of last year.

Above: SKaDinha’s Twitlonger on his exit from the team in which he states “the reasons were many, but the main thing was not getting used to the imposed routine”.

Team oNe, wanting to support the players' growth and with their knowledge, paid for three trips in less than a year, that cost about [~$34,000] for the company. For that, there was a replanning of the payments of said prize money, always with complete consent of the players.

Referred to above are the team’s trips to DreamHack Valencia 2019, the Allied Minor and a boot camp earlier this year -- the latter two being in Las Vegas. This implies that the players agreed to a delayed repayment of the prize money for these events due to the extra cost that the trips took on the organisation.

Team oNe works in a “gaming office” system. Therefore, athletes are hired to provide their services as professional players and receive, along with their remuneration, the amounts related to the allowance so that they can pay their expenses such as rent, travel and food. Any condition in which the homes of Team oNe athletes are located is not the responsibility of the organization.

As such, Kakavel is stating that the lack of food, space and internet connection in the Team oNe’s accommodation was due to the players renting out inadequate accommodation and was not the fault of Team oNe.

Just prior to the release of this information on Saturday morning, the organisation had released the following statement on Twitter: 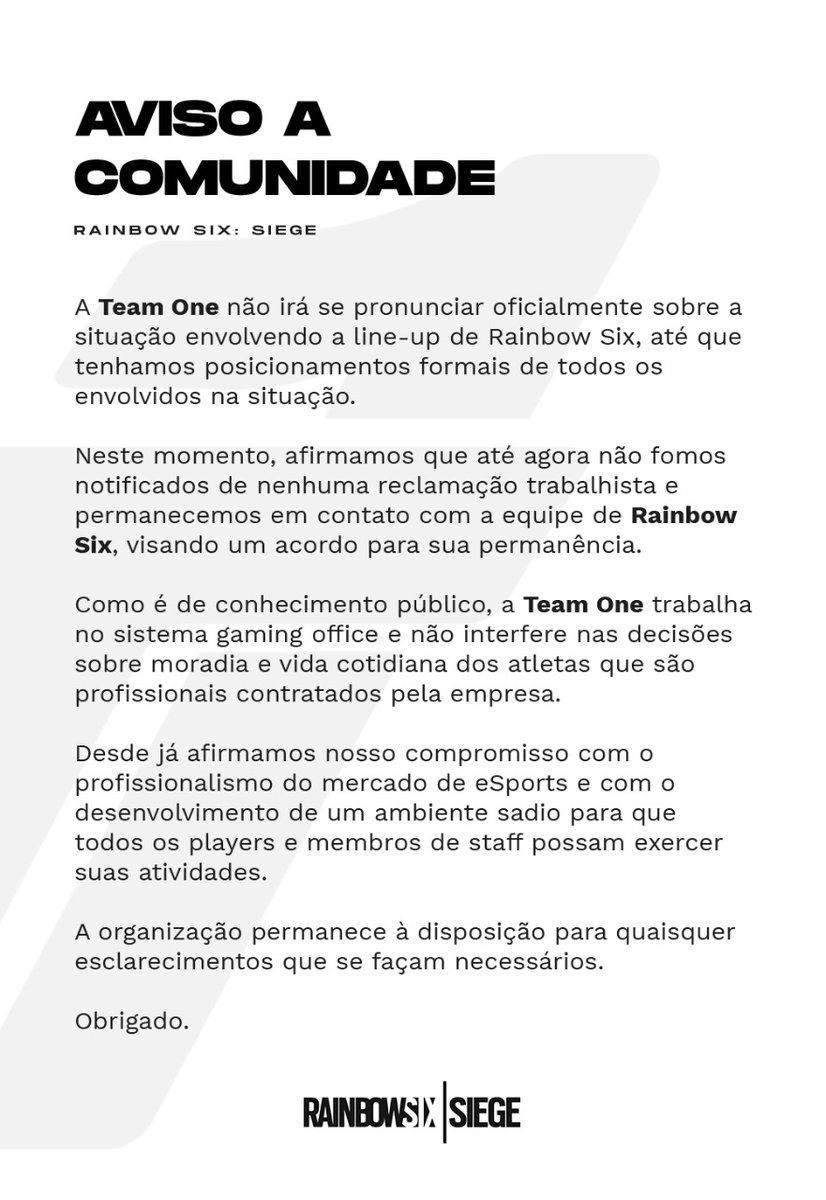 Team oNe will not officially comment on the situation involving the Rainbow Six line-up until we have formal positions from everyone involved in the situation.

At this time, we affirm that until now we have not been notified of any labour claim and we remain in contact with the Rainbow Six team, aiming at an agreement for their permanence.

As is public knowledge, Team oNe works in the gaming office system and does not interfere in the decisions about housing and daily life of athletes who are professionals hired by the company.

We have already affirmed our commitment to the professionalism of the eSports market and to the development of a healthy environment so that all players and staff members can exercise their activities.

Due to the above issues, the players of Team oNe wished to leave the organisation. The issue, however, is doing so would require them to pay a fine of R$81,000 (~US$15,450) per player to negate the contract. Due to this, they have started a legal battle with the aim of proving that Team oNe has committed labour rights infringements which would terminate all contracts the players have with the organisation without needing to pay the fine.

A court file accessed by ESPN Esports Brazil went into detail about the charges claimed by the defence per person for each of the five players and two coaching staff:

In total, this adds up to R$550,151, or US$105,052, for the initial seven members of the team. As well as this, the team’s newest player of Felipe “FelipoX” De Luciahas also sued for one contract rather than two, increasing the total further.

Ubisoft Brazil has responded to the announcement with a statement regarding Team oNe’s options flatly ignoring the legal case. 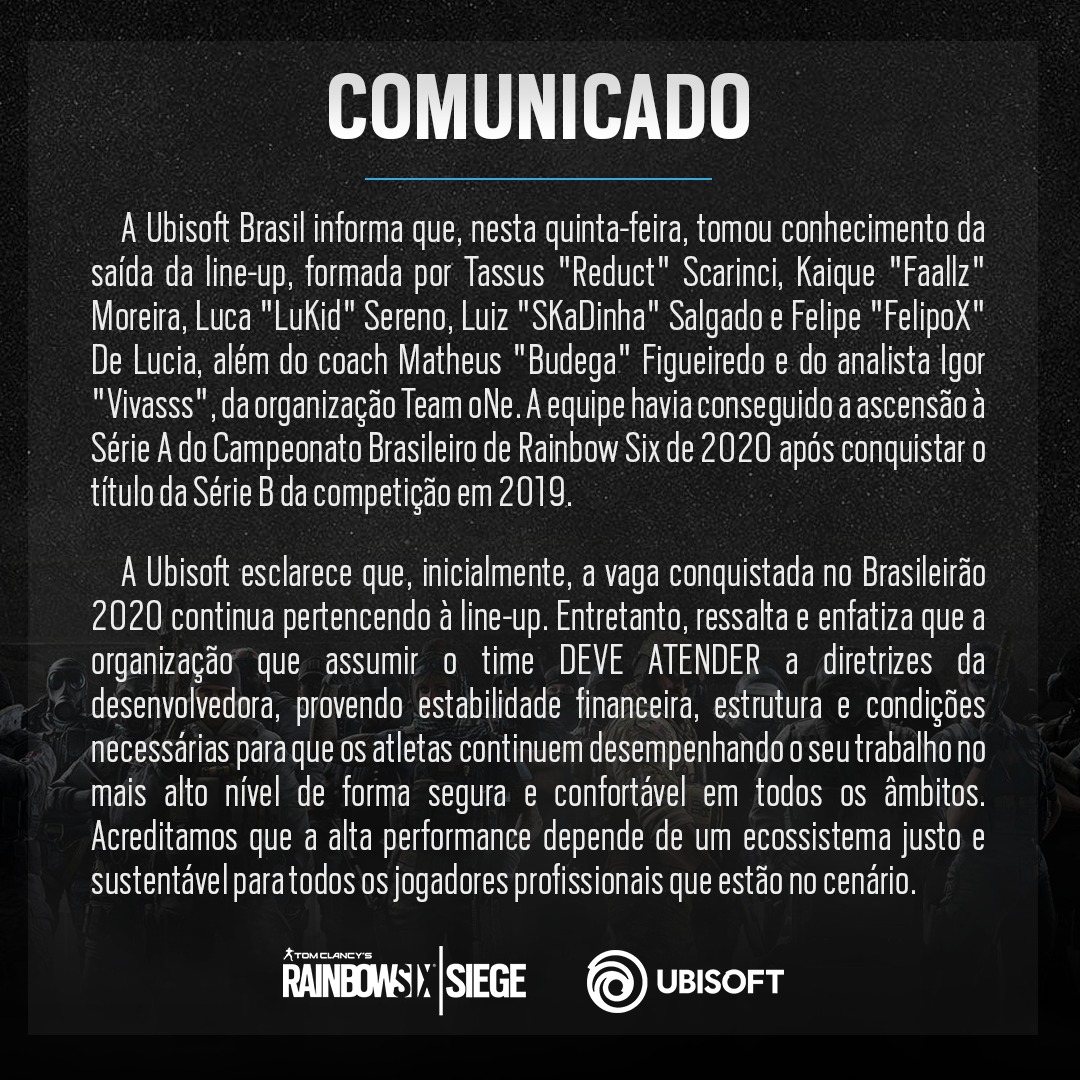 ...the new organisation that signs the players MUST check all the demands of the publisher, providing financial stability, infrastructure and all the conditions that the athletes need to continue performing at a high level. We believe that high-level performance depends on a fair and sustainable environment for all the professional players in the scene.

The case itself is somewhat similar to that of the North American Challenger League team of Pittsburgh Embers (which you can read about in detail here).There, due to the players being locked into a contract that would see them go unpaid, the lineup attempted to leave the Embers only to be blocked by the organisation who insisted they were still under contract with them.

While it is likely that the Embers were legally in the right, they had no power to take the case to the courts, especially due to the players being from a number of different states. This case, however, sees both the players and organisation willing to take the issue to court, possibly creating the first case of its kind in R6 esports.

While the numbers themselves aren't particularly relevant to the story, also revealed in the court documents obtained by ESPN are the players' official wages while a part of Team oNe.

When the team was first signed by the organisation, the players were being paid R$500 (US$95) per month, with all expenses being covered (food, accommodation, telephone bills etc.) up until at least June 2019, when they began their Pro League campaign. Sometime following this, the team renegotiated their contract to be paid R$4,500 (US$860) a month as a combined total for both their wages and expenses.

At the moment, no other R6 esports contracts are public, making this a remarkable look into the salaries of Latin American Pro League players.

As of now, the ex-Team oNe roster holds a spot in the BR6 2020 League, which will act as the local replacement to the region’s Pro League, and so will be actively looking for a replacement org while legal proceedings occur.

Keep an eye here at SiegeGG for more news regarding the situation between Team oNe and its now former players, with this article set to be updated as new information is revealed.

US Division 2020 Finals: Why You Should Care
More news
We use cookies to improve your browsing experience. Learn more