Jager is a defending Rainbow Six Siege operator, who is played in 78% of all rounds in SiegeGG-tracked matches.

SyAIL has played the most rounds in their career with Jager. They are closely followed by Shaiiko, whose favorite operator is Jager.

Marius "Jäger" Streicher is one of the most famous operators in Rainbow Six Siege. But is he currently viable? How do you play Jäger correctly?

We have everything you need to know here!

Jäger was raised by his uncle, who was a mechanic with the Bundesplizei (BPOL) Aviation Group. So... there were no kids' toys in his childhood but engines and motors instead. According to Ubisoft's description: "Since he had an affinity for complex machinery, his uncle encouraged him to study aeronautical engineering at university."

Jäger would be able to combine his knowledge with his passion for flying at the BPOL-Aviation Group, where he would serve his country.

According to Ubisoft, Streicher began designing defensive weapon systems for BPOL. This included a ground-based Active Defense System (ADS) prototype. It was his prototype that caught the attention of GSG 9 and Rainbow. 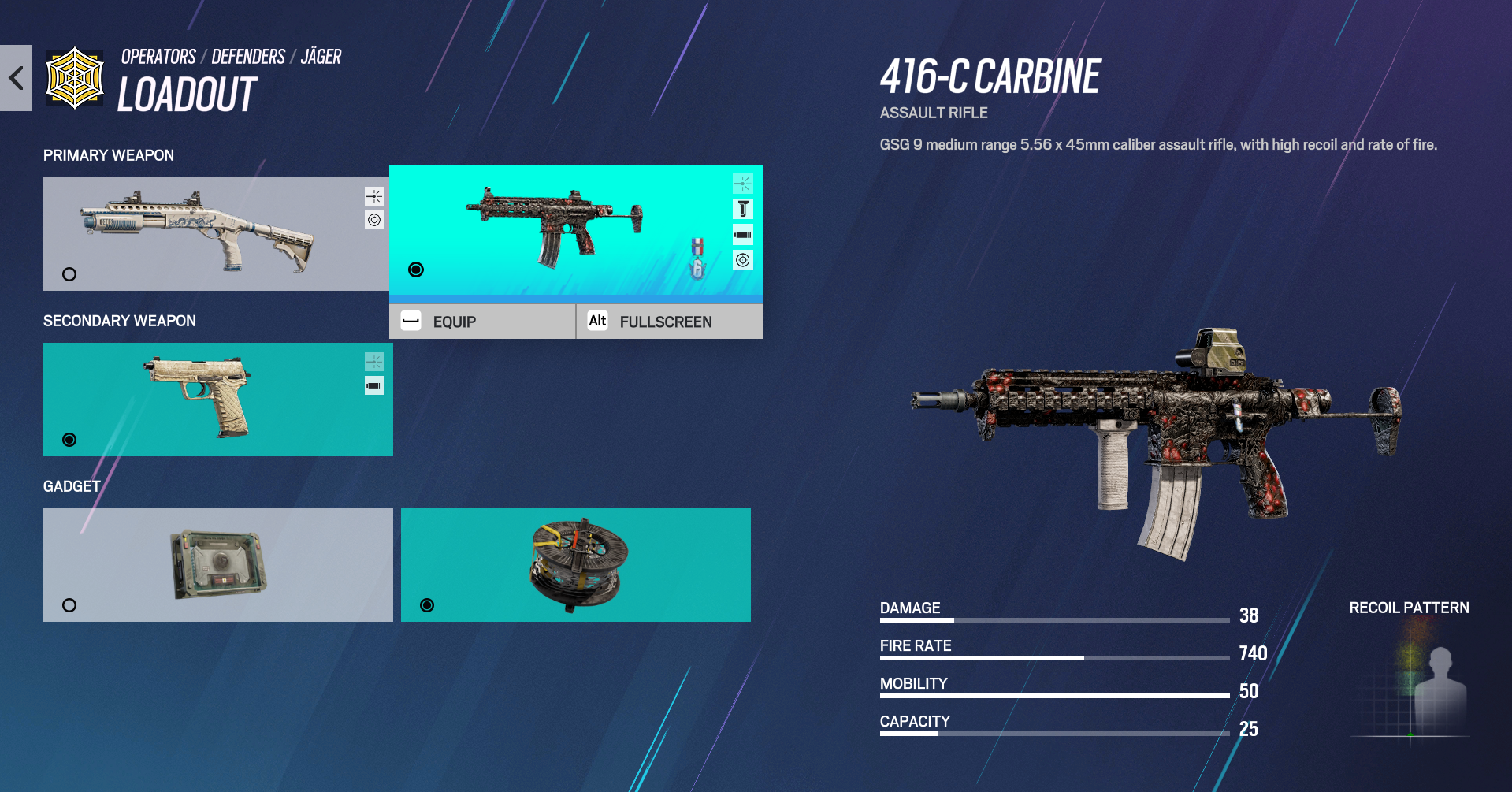 There's no discussion here. Unless you want to go original or you have a very specific strat in mind, your loadout will always be the 416-C as primary and the P12 Handgun as secondary.

Regarding Jäger's gadget, that's a whole different story. Some people prefer the barbed wire, others prefer the bulletproof camera. Honestly, it depends on what your teammates will bring, and the site you are going to defend.

Jäger is mainly used as a roamer, although his gadget is commonly used inside the site.

His 416-C Carabine is seen as one of the deadliest weapons on the defender side, despite it being nerfed not a long while ago. Although its recoil might be a bit difficult to learn, the importance of Jäger is worthy of mastering it.

He is a two-speed operator, so he is seen running across the map as if it was his own house. Before focusing on that, he must place his ADS to protect priceless gadgets like shields, Bandit charges, Kaid electroclaws, among others.

How to use Jäger's gadget in Rainbow Six Siege

Jäger has three ADSs that can be placed on the floor or on walls. These will neutralize any projectile or nade thrown near it. Once the ADS intercepts an attacker gadget, the ADS will be turned off for 10 seconds.

Jäger's ADS are incredibly important at defending. As they intercept any projectile, you can protect any kind of gadget. For example, it is common to see from two to three ADS just over the drone hole in Chalet's basement garage wall so Bandit can trick hard breaching gadgets.

These are commonly used to keep shields for as long as possible, and force attackers to waste utility that could be used in the final take.

Also, as ADS can be quickly placed during the preparation phase, Jäger can focus on roaming and giving attackers a hard time. He is essential.

If we talk about Jäger's gadget, his main counters are Thatcher, Twitch, Kali, Zero, and Flores. Any operator that can destroy or deactivate his ADS from distance can be considered as a threat for the defenders — a definition that also includes attackers with throwable gadgets, which include operators with grenades and flashes.

ADS aren't bulletproof so if these are in the attackers' sight, these will be quite useless.

If we focus on his role as a roamer, attackers like Lion, Jackal, or Dokkaebi will be Jäger's worst nightmare. So, he is essential indeed, so essential that attackers have many ways to put to an end his life.

Due to Jäger's popularity in the game, he has many cool skins to choose from. Let's have a look at some that you can still purchase in the in-game store. 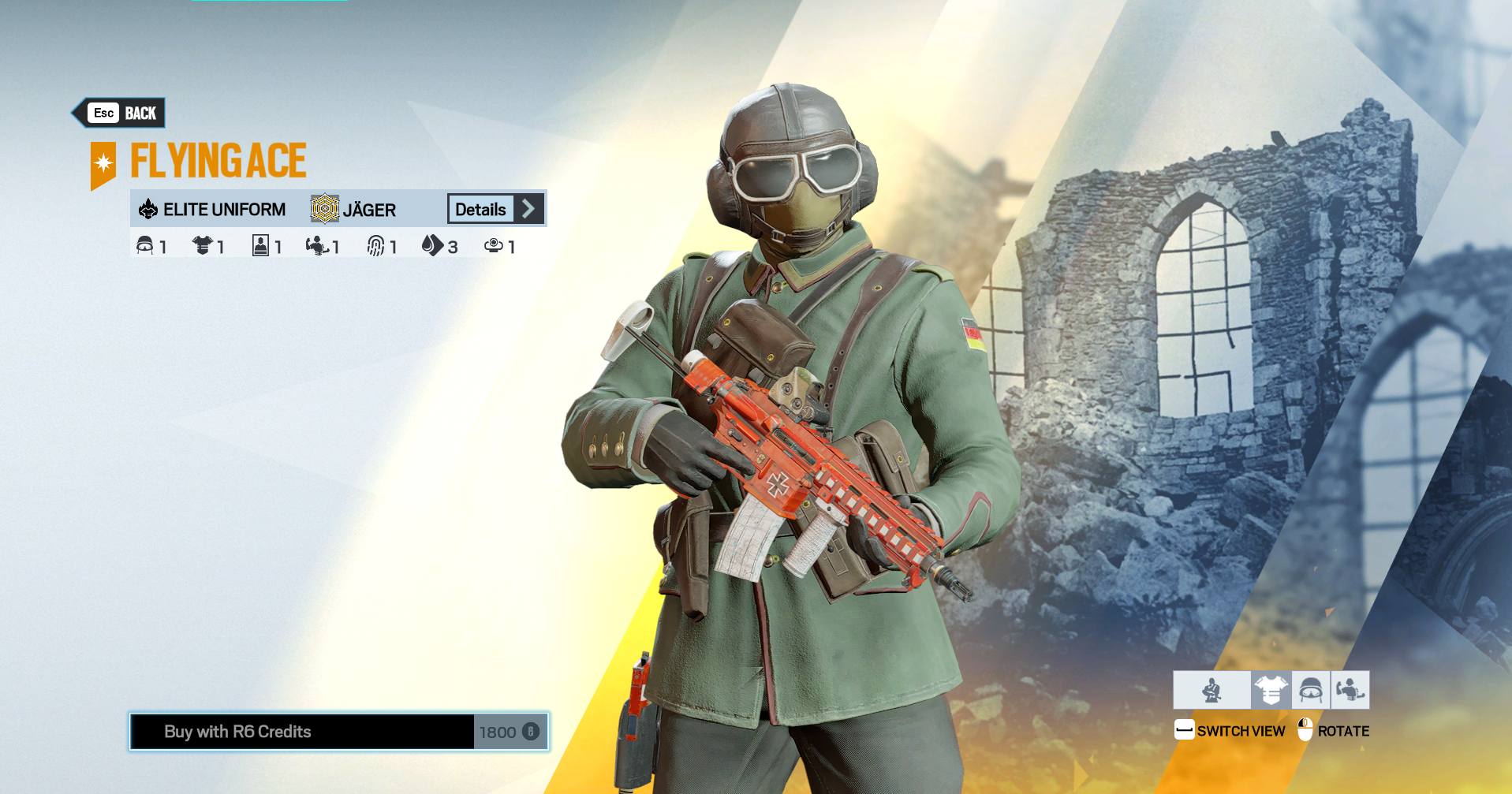 Jäger's Elite Skin is one of the most seen in the game as it was first launched on Oct. 26, 2017. Not only that but his importance in the game and presence makes having his elite almost a must. Up to you to rock these colors on the battlefield. 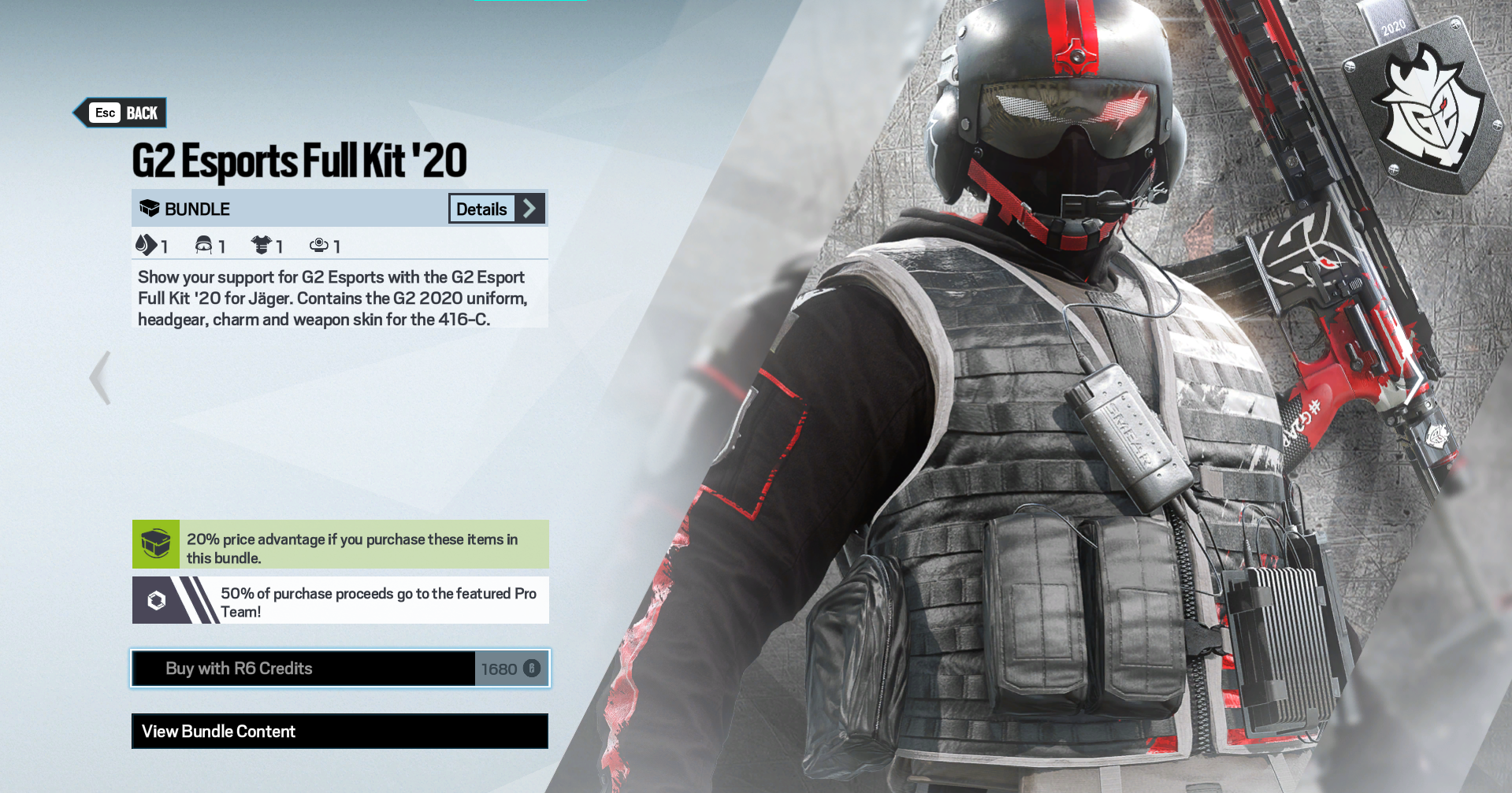 Another option is Jäger's G2 Esports bundle from 2020. It includes a skin for the Carabine, a uniform, a headgear, and a universal charm. If you always dreamt of having Jäger's Carbine Black Ice, this might be your Plan B. You can rock the current North American champions colors by purchasing the Soniqs skin for the Carbine.