Dokkaebi is an attacking Rainbow Six Siege operator, who is played in 8% of all rounds in SiegeGG-tracked matches.

GatoRada has played the most rounds in their career with Dokkaebi. They are closely followed by AceeZ, whose favorite operator is Mute.

Although Dokkaebi doesn't fit the current meta — and in terms of loadout she is far from being a tempting pick — she helps the team in her own way. Dokkaebi, combined with other operators, can be extremely helpful at cleaning roamers.

Her Logic Bombs and her smokes make her a good operator, especially in the last stages of a round. Let's have a look at how you can use her in the game.

Grace "Dokkaebi" Nam is South Korean. She joined the KAIST thanks to a National Academic Excellence Scholarship. According to Ubisoft, "She served in the Republic of Korea Army (ROK), where her adeptness with technology saw her assigned to the 5163 Army Division."

Later on, Dokkaebi joined the 9th Special Forces Brigade, the Ghost corps, where she trained in "mountaineering," "survival techniques," and " guerrilla warfare." Due to her "creative, unorthodox approach," she caught the eye of the USFK or the 707th Special Mission Battalion.

She decided to join the 707th alongside "Specialist Chul Kyung Hwa, codename Vigil" until joining Team Rainbow. Dokkaebi now works closely with Masaru "Echo" Enatsu in the R&D lab, according to Ubisoft's biography. 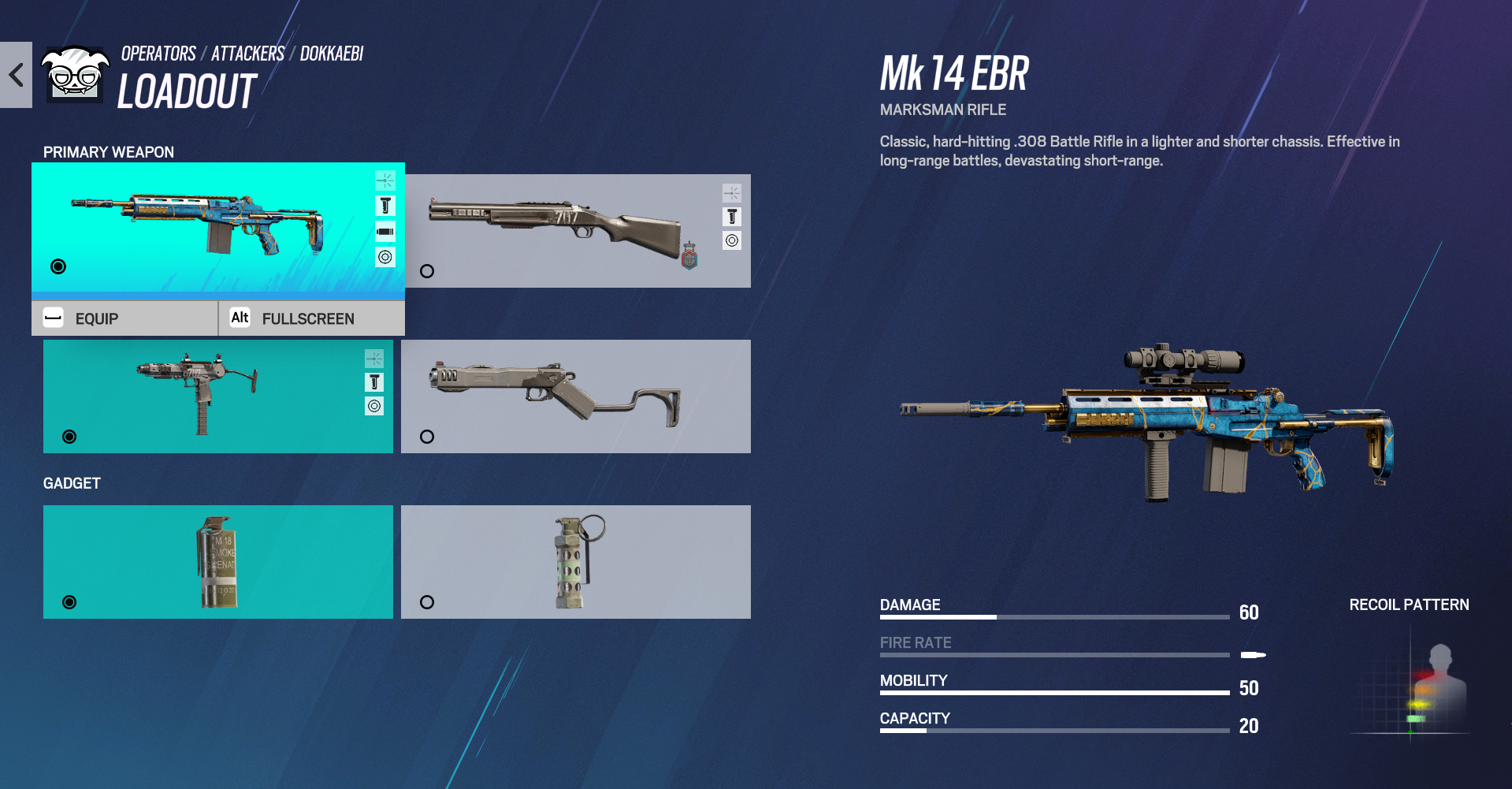 As we previously mentioned, Dokkaebi's loadout isn't the most appealing in the game. Our advice is that you go for the Mk 14 EBR, unless you want to try your luck with the BOSG — a gun with just two bullets per magazine that has a very high chance of killing or injuring with just one hit.

The secondary is a tricky one. The SMG-12 looks like the best option, a deadly weapon especially in short-distance gunfights. However, the GONNE-6 is very useful in the current meta. Added to her gadgets, Dokkabi can be an impactful operator in utility-cleaning tasks.

Dokkaebi has many functionalities. She is a support that can assist her teammates with her Logic Bomb — by ringing the defenders, attackers can find them quicker. You can combine it with a Lion or a Jackal, who are very good roamer cleaners too.

As we previously mentioned, she is also really good at utility-cleaning tasks. She can trigger up to three Jäger ADSs or Wamai devices — using her three flashes. If you go for the smokes, you can use also use them to trigger devices or support your teammates when planting. Keep in mind that the GONNE-6 can also destroy any defender gadget, such as shields or bulletproof cameras.

Overall, Dokkaebi is a very complete supporter, but her loadout isn't the most appealing one, especially in ranked or casual game-modes, where people usually focus on kills.

How to use Dokkaebi's gadget in Rainbow Six Siege

Dokkaebi's gadget is called Logic Bomb. When she activates it, she automatically calls any defender operator alive in the round. Defenders will have to wait until the call is over or manually hang up the phone in order to stop the sound. That part of her special ability is very useful in roamer cleaning tasks.

However, that's not the only thing she can do. When she is on the server, dead defenders drop their cell phones to the floor. If Dokkaebi finds one, she will be able to hack them and check defenders' cameras.  She also gives the rest of the attackers on her team access to them.

Once the cameras have been hacked, defenders will see how the camera colors change from blue to grey. Hacked cameras also display Dokkaebi's logo in the middle of the screen.

There are no precise counters to Dokkaebi. The only thing defenders can do against her is shoot at their teammates' phone cells once they die so Dokkaebi can't hack their cameras.

Mute jammers can also help you at countering Dokkaebi, as you won't have to hang up her call manually. Get near a jammer to automatically stop that annoying sound.

Dokkaebi has some really good skins and bundles, so let's have a look at some of our top picks. 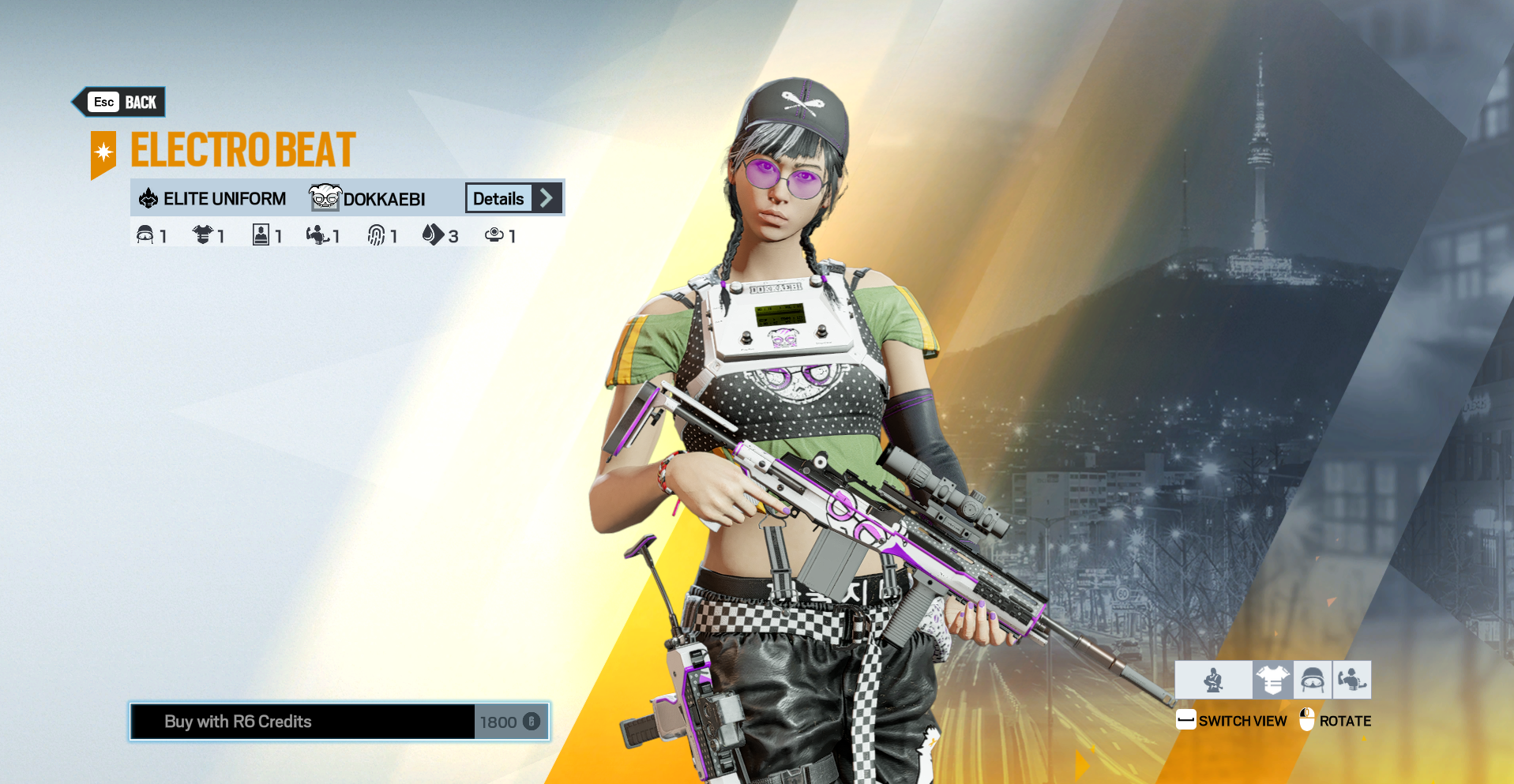 This is possibly one of the best elite concepts in the game. Dokkaebi's Electro Beat bundle includes what every other elite skin gives an operator, but everything on her just looks cooler. From her outfit to her victory celebration, brilliant concept. The Golden Repair skin is one of the most beautiful skins in the game. This looks incredibly clean, combining gold and blue shades. It is also quite difficult to see, as it can only be obtained via Alpha Packs. Dokkaebi's Talon 2021 skin is a very cool concept. The design includes a red monster, which makes it look exotic. If you are into esports skins, you might know Team Empire has another skin for the Mk 14 EBR. It's up to you to choose who you want to support!