Bandit is a defending Rainbow Six Siege operator, who is played in 18% of all rounds in SiegeGG-tracked matches.

jOONAS has played the most rounds in their career with Bandit. They are closely followed by Merieux, whose favorite operator is Ash.

Bandit is one of the most used operators in Siege due to his special ability. Keep on reading to know more about the character, his strengths, and his weak points.

Bandit and his twin brother were raised in a district near the Berlin Wall. His father was part of the police force, which encouraged him to join as well. While working with the Bundespolizei Brunsmeier, Bandit excelled in crisis situations.

Said Ubisoft in his official biography: "He transferred to the Aviation Group long enough to obtain his helicopter license but his adaptability and experience with border surveillance flagged him for undercover operations. He was embedded as an undercover agent in the terrorist organization Red Army Faction (RAF) and later in the Hannover Chapter of the Hell's Angels."

Bandit provided valuable information during both operations thanks to skilled undercover work. He gained even more skills in guerrilla tactics and explosive devices during this time as well. Bandit soon developed a prototype of his electrified barricade and deployable shield. 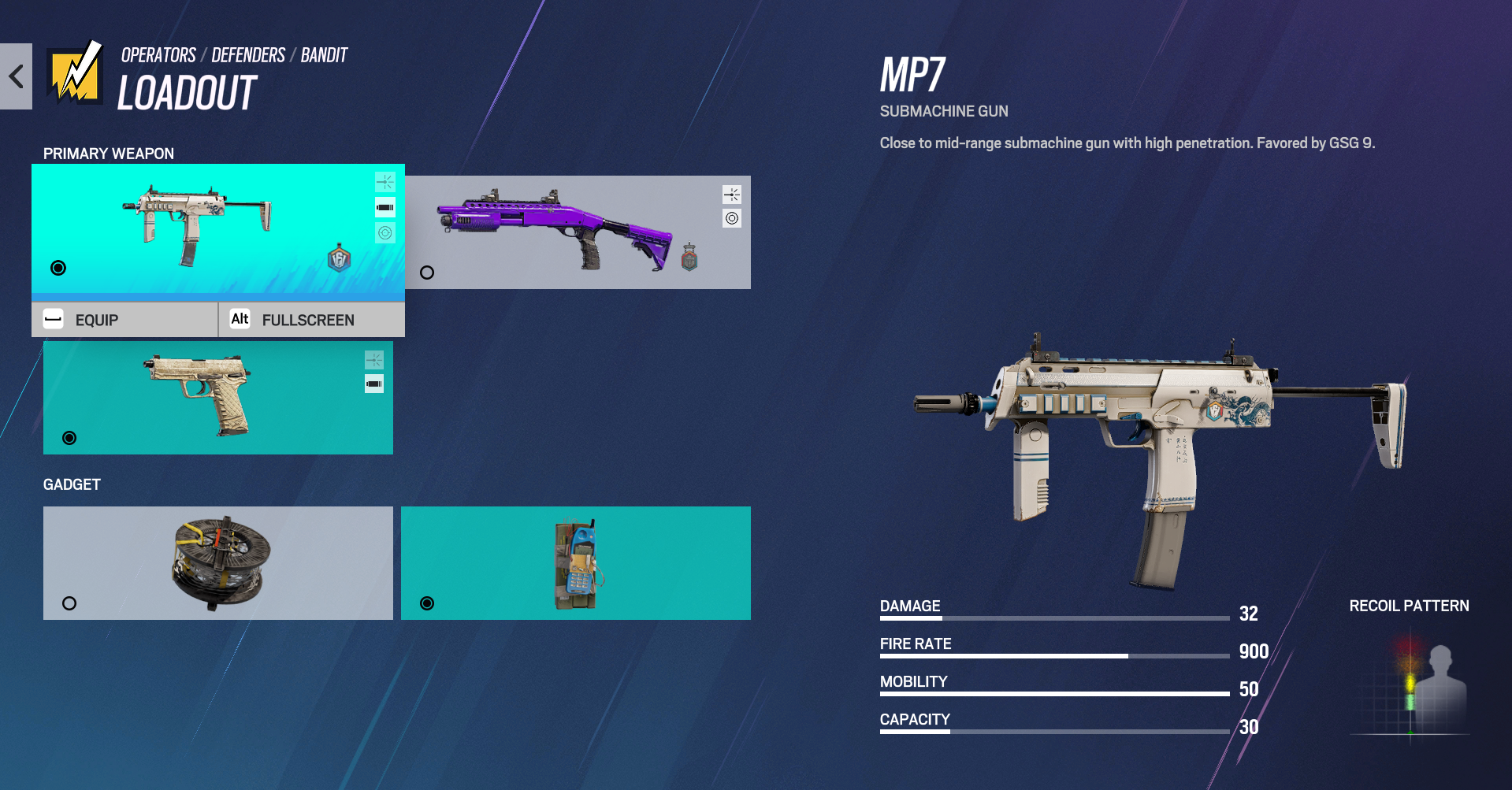 Bandit's loadout is usually the same: the MP7 and the P12 Handgun alongside a C4. However, there can be variations depending on the line-up. The shotgun is one of the best in the game, especially in close gun fights.

Meanwhile, the MP7 is one of the only weapons in the game that can be used with the iron sight, although the holographic and the reflex are the most popular.

Bandit is usually used as a flex or a roamer. It all depends on the site and the needs of the team.

If the team is defending a site where Bandit can perform the famous "Bandit trick," then he will probably play as a flex — near the site. Bandit will try to perform his obligations as a hard breacher denier, denying operators like Thermite, Hibana, or Ace, from opening key walls.

This can be applied in CCTV (Clubhouse), for example, since Bandit's main goal is keeping that wall closed for as long as possible. Once it's opened, Bandit can play as a flex or even a roamer due to him being a three-speed operator.

How to use Bandit's gadget in Rainbow Six Siege

Bandit has four electric batteries that he can deploy at any reinforced wall or barbed wire. Once these are deployed, attackers can't open reinforced walls. In the case of barbed wire, operators will receive damage when touching it.

Bandit is possibly the walls' best friend. His mission is to keep them intact for as long as possible, which sometimes leads to the previously mentioned Bandit Trick. This tactic consists in playing with the batteries and the attackers, removing and deploying them by listening where the hard breaching charge is deployed. Bandit must also pay attention to when Thatcher throws his EMPs.

If Bandit is successful, he will waste the attackers much time — and utility. If a hard breacher tries to deploy a gadget in an electrified wall, this will be destroyed. The same happens when the charge is about to detonate but a battery is deployed.

Capitão can also be a counter, as his fire arrows can block Bandit from performing the Bandit Trick. No batteries, no problem. The same can be said about Zofia or any operator with grenades — if there is a drone hole next to the wall in question, it will be easy to get rid of the batteries and even Bandit himself. A good example of this is Chalet's garage wall.

Another option is Kali, who can destroy batteries from distance. However, her having a rifle as a primary is enough reason for many players to not use her. 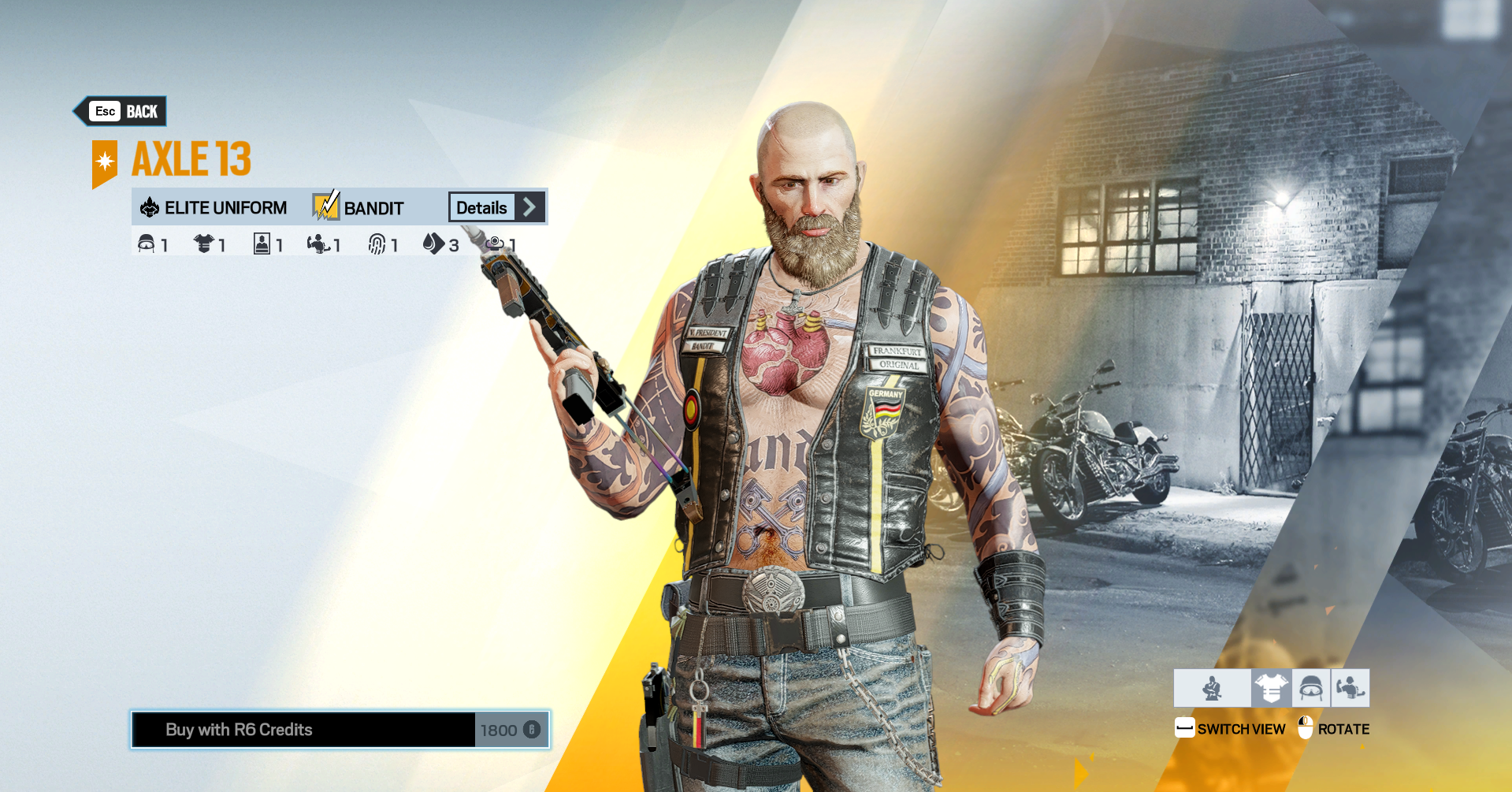 Bandit has one Elite Skin, called AXLE 13. The bundle costs 1800 R6 Credits. It includes headgear, a uniform, a victory celebration, three weapon skins, a charm, and a special card background for Bandit. Heroic's only R6 Share skin is for Bandit's MP7, which was released on Dec. 14.