A big change may be coming to the Challenger League format.

Earlier today Ubisoft announced the possibility that both the European and North American Challenger League tournaments will not award the victor with an EUL and NAL spot respectively.

While nothing has been announced for certain yet, Ubisoft stated the following in an announcement for the NACL: 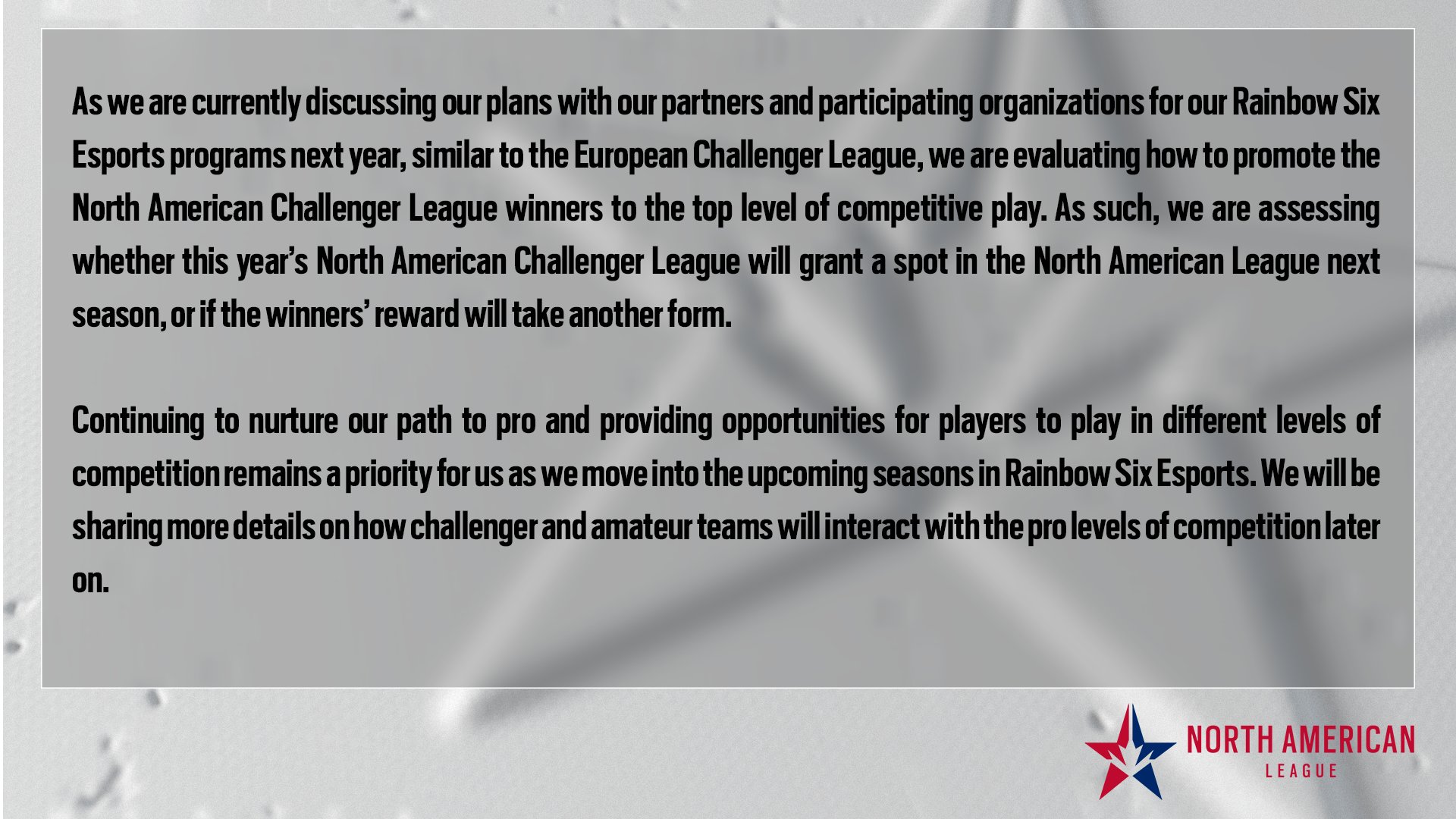 Ubisoft released a similar statement for the EUCL:

As we are currently discussing our plans with our partners and participating organizations for our Rainbow Six Esports programs next year, we are still evaluating whether this year’s [European] Challenger League will grant a spot in the [European] League next season or if the winner’s reward will take another shape.

We design our competitive ecosystems to provide opportunities for players to compete at different levels and embark on their journey from local community tournaments to international events. Continuing to nurture this path to pro remains our priority for upcoming seasons, and we’re currently exploring various options for the winners of the [European] Challenger League to accede to the highest level of competitive play next year as well.

Should this change go ahead, this will be a particularly large blow in Europe as the region has seen a consistent stream of success stories come up through from the Challenger League. This includes NAVI, PWNZ, Outsiders, Heroic, and BDS who have all come through the tiers since the beginning of 2019.

In North America, meanwhile, Parabellum won promotion to the NAL at the end of 2021, however, the 2020 Challenger League was cancelled after RentFree's opponents, eUnited, left the Rainbow Six scene.

This announcement also comes just 11 days after Luminosity Gaming rejoined the Rainbow Six scene by picking up an NACL roster, and a month after the ex-Empire roster which finished as runners-up at the 2022 Six Invitational announced their full roster ahead of the EU Challenger League season, with the intention of using that to qualify back into the EUL.

While it is still unclear what the changed plans would entail, many fans have assumed this refers to plans to franchise the tournaments with organizations owning spots in the leagues thus meaning rosters can't naturally win their way into the top tier of the game. This is just speculation, however.

This announcement also came alongside open qualifier dates for the EUCL tournament which will take place from July 8-10th ahead of the Stage 3 competition. With the EUCL being one of only two occasions in a year in which tier two European rosters across national leagues face each other, it will still be a tournament to look out for regardless.