Stats of the week: NAL the most competitive ever? Brazil widens regional gap

With all four regions nearing their end for Stage 1 2022, here are some of the standout statistics behind the previous week of professional games.

With at least eight games now played in all four regions, here’s a breakdown of some of the more impressive numbers behind last week’s results.

Brazil widens the gap between Mexican and South American teams

While Brazil was expected to win these games, the inability of their opponents to win a single map off of the Brazilians is notable, as they managed better results last year.

The Mexican and South American sub-region’s worst performance to date was at the SI 2021 qualifier where their teams won zero maps in eight attempts against Brazilian opponents, a total they’ve equaled over the last two days.

There still is a chance yet, though, as on Wednesday we’ll see two more matches in which Brazil plays Mexican or Argentian opponents for a spot at the Charlotte Major. This means any maps won would put the subregions on the edge of a historic global appearance. However, if the two teams get swept again, this would be a 0-12 performance in favor of Brazil, by far their worst performance.

NAL more competitive than ever?

With one playday left, Mirage currently sits in last place with six points. This is the third most that a last-placed team has had in the North American region on a per-game basis. In the unlikely event that both the Mirage vs Parabellum and Soniqs vs TSM games end with overtime victories to the former team then this stage will beat the prior record with 0.88 points per game for the bottom team.

In a similar vein, DarkZero currently sits in fourth place with the equivalent of 1.88 points per game. This is already the second-highest it has ever been and must rise on Wednesday as DZ and SSG face each other with the winner reaching at least 16 points.

To beat the record set during stage two last year, the fourth-place team needs 18 points in nine games. While this isn’t possible during this stage, the record can be tied if DZ beats SSG in regulation and XSET beats Oxygen in overtime. As this is a points-per-game record, tying it across more games is somewhat more impressive as it requires greater consistency.

Across the six Six Invitational APAC qualifiers, five Pro League APAC LANs, and six Six Major APAC qualifiers there’s been a total of 26 invitations to global events on offer. Out of these 26, eight have been won by Japanese teams, seven by Australian, six by Korean, and five by South-East Asian.

This week, we could see Korea possibly tie Australia or Japan’s total with Talon and either DWG or SANDBOX’s qualification. Alternatively, Australia could once again take the number one spot they held last year with Knights and Chiefs qualifying.

Looking at the individual teams, SANDBOX could tie Fnatic’s APAC playoff record while DWG could tie Invictus’ and Nora’s global qualifications in the space of a year. Talon meanwhile could be just the third distinct Korean roster to ever play against non-APAC teams. 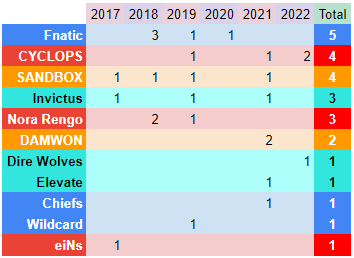 Finally, with three teams each from the SEA, Oceanic, and Japanese sub-regions, qualifications from Knights would put OCE back in the lead by the number of successful teams. Knights previously qualified for the Mexico Major by winning the APAC South league, and so didn’t need to play in the playoffs.