Stats of the Week: Debuts impress in all regions as nade, volpz, and Solotov give top performances

With the first full week of Stage 1 2022 complete, here are some of the standout statistics behind the last few weeks of professional games.

This week has seen surprise showings in all four regions as the league portion of Stage 1 began in Europe and North America. During these games, we saw some remarkable plays and standout flops, so let’s take a look at some of the numbers that drove this week’s results.

A few playdays into the season, there’s been a number of standout players across all four regions.

The biggest surprise of the 2022 season so far has been the performance of w7m esports which currently sits on top of the BR6 table. In two weeks they've already scored more points than stage three. This success can be attributed largely to their two new rookies, Gabriel "volpz" Fernandes and João "Jv92" Vitor, with the former player being the third-highest rated player in  BR6 so far.

Volpz, who turned 18 last August, spent last year on Team Singularity with whom he finished the Challenger League in sixth place. Now in the BR6, he got six kills to just one death in w7m’s 7-0 victory over MIBR, got 10 kills to five deaths in his 7-3 debut against FaZe, and was instrumental in their 8-7 win over FURIA. He secured a 1.54 rating compared to his nearest teammate on 0.84 during the FURIA win. His lone weak game came during yesterday’s 7-3 victory over Liquid where he sat on a 0.88 rating.

While they still have notable games against NiP and 00 Nation yet to go, w7m now looks set to qualify for the Six Major on the back of their rookies, a remarkable accomplishment for an organization who’s best prior result in the BR6 was seventh place during the 2020 season.

Also of note in Latin America is Black Dragons’ sole pickup during the transfer window, Felipe "nade" Sá. Despite having extremely limited prior experience he currently sits as the best player in BR6 after four games with a rating of 1.39, 0.01 ahead of the back-to-back player of the year, Luccas “Paluh” Molina.

Onto in North America, Oxygen’s Ethan "Nuers" James achieved a 1.54 SiegeGG Rating in his very first professional game against the newly crowned world champions, TSM FTX. He then dropped down to a 0.91 rating against Astralis, however, he kept an even kill, death ratio.

Jameson "KoolAid" Lancaster, meanwhile, secured a 1.26 rating across his two games, just 0.01 over Nuers. This came from a 1.42 rating during Parabellum’s victory over Soniqs and 1.13 rating during their 5-7 loss to beastcoast. KoolAid was also the team’s main planter and primarily played Castle on defense.

Over in Europe, it was the recent Challenger League victors and Six Invitational attendees, Fatih "Solotov" Türker and Josh "Yuzus" Pritchard, from MNM Gaming who attracted the most attention. They averaged ratings of 1.35 and 1.31 respectively.

Despite MNM losing both of their games 4-7 against G2 Esports and HEROIC, these two players performing significantly better than the rest of the MNM roster. Regionally, their closest counterparts have been Ben "CTZN" McMillan from G2 who has averaged a rating of 1.32, and HEROIC’s Jake "Sloth" Brown who’s at 1.65, both of which they’ve already played.

Finally, APAC North and South have had one rookie of note each, Juwan "Mephi" Park from T1 and “Kyro” from Wildcard.

Starting with Mephi, the player joined T1 to replace the team’s stand-in coach after turning 18 years old just last October. Since then, despite having no competitive experience at any tier, he’s helped T1 to currently reach third place in the APAC North standings following three wins in a row over SANDBOX, CYCLOPS, and Fnatic.

Kyro joined Wildcard Gaming after a year in various national-tier tournaments. He currently leads the team by rating after five games which include two wins over Knights and FURY. His best performance so far came against Elevate in which a 1.6 rating and 2.0 kill death ratio weren’t enough to stop a 4-7 defeat.

While both of these players' respective ratings aren’t as high as the other rookies, they both sit within the top five players by rating in their division as they lead their team closer to an APAC Playoff appearance after fighting off relegation in January.

Fairing the worst is Fnatic with a win rate of just 19.35% with six wins in 31 rounds while FURY and Renatus in APAC South are tied on 22.22%, both with six wins in 27 rounds. Fnatic is particularly odd as they sit with a very high 73.08% defensive win rate which has kept their APAC League hopes alive for this stage. This shows they can perform, but are stumbling on attack.

If you exclude these three teams from the total count the region’s win rate does rise to 44.64%, however, this is still much lower than seen in the three other regions. 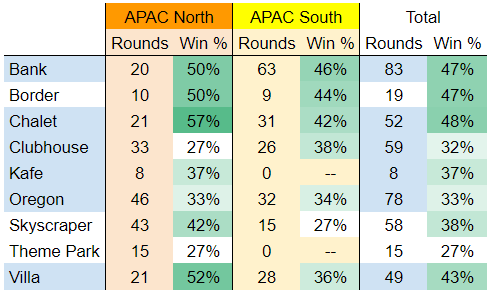 Thorn is in play

While it took some time for teams to take a liking to Osa, the newest operator added to the competitive Rainbow Six Siege, Thorn, has had more success. Already she’s become the go-to defensive operator for Astralis’ David "iconic" Ifidon, FURIA’s Thiago "Handyy" Ferreira, and T1’s Wonil "iLeven" Cha, peaking with a 13% pick rate in APAC North.

While it’s still too early to make any concrete conclusions about the operator's competitive viability, it is very clear that she fits into a roaming roam. This is as iconic and handyy previously played Melusi and Jager over the last two stages while iLeven played Mozzie and Alibi, all of which fit into this role type.

Looking into her success rate, Thorn was brought five times by Iconic on Skyscraper, winning all five attempts with 11 kills to three deaths. T1 meanwhile brought her 11 times, winning eight of them, with four of five wins on Oregon, one out of three on Villa, and two out of two wins on Skyscraper. Finally, handyy brought Thorn 10 times winning six of them, half of which came on Skyscraper.

This is a really good success rate for the new operator so early on, meaning by the time we reach Stage 2 she may become a much more common sight.

While Theme Park’s removal from the competitive map pool at the beginning of year six led to some vocal complaints by professional players, its reintroduction at this stage has not led to teams picking it back up.

So far across all five main leagues it has been played just twice -- TALON vs DWG during playday three of APAC North and Oxygen vs TSM during playday one of the NAL -- out of 80 matches so far this stage.

Somewhat interestingly, Kafe has just a single extra pick than Theme Park with just three plays despite it being the most played map at the 2022 Six Invitational.

While it is unclear why teams around the world are choosing to avoid the map for now, teams should be familiar with how the map works as it has been unchanged since it was last in the pool. This means it’s likely that we’ll see it a lot more at the Six Major as it would take less preparation for teams to learn the map and would be a good surprise pick in best of threes.

Kafe meanwhile has been so played out so much in recent seasons that, similar to Oregon before its rework, teams have likely stopped playing it due to its repetitive nature.