Play day four of the NA League is now over.

Here’s everything that happened on the second play day this week in the NA League.

Yoggah pulls off the play of the stage despite loss

After an hour and a half delay to the start of the match, Slashug was eager to get the game over quickly for beastcoast against XSET. After losing round one, Slash got a triple kill, a quadruple kill, and then a 1v3 clutch in subsequent rounds to help his team take the lead.

Not to be outshone, XSET had a number of hero plays of their own. Most notable was a remarkable post-plant 1v4 clutch from Yoggah, which will almost certainly be one of the best plays of the year.

Nevertheless, Surf stepped up in the second half of the game, as a 1v1 against SpiriTz on round 12 ensured that beastcoast won all three points.

Soniqs march on, give Oxygen their first loss

For much of the Soniqs’ defensive half against Oxygen, their fates relied on the duo of Kanzen and Gryxr. In round three a quadruple kill from Gryxr was then won on time in a 1v1 by Kanzen while round six was a 1v3 clutch on time, also by Kanzen.

These two nail-biting round wins meant that although Oxygen out-dueled Soniqs, the rosters were tied as they swapped sides. This definitely favoured the Soniqs as they looked like a well-oiled machine here. No clutches or flashy multi-kills were needed for them to win four of the next five rounds to take the game 7-4.

Not only does this launch the Soniqs into the top-four once again, this was also only Oxygen’s second loss since April after they came second in the NAL in Stage 1.

Despite Forrest securing twice the number of kills of any of his teammates, this wasn’t enough to earn a point off of TSM FTX.

After a 4-2 half to TSM, multiple quadruple kills from Achieved and Beaulo only further increased TSM’s lead as Astralis had little answer save from a Dpfire multikill.

TSM now sit three points clear of their nearest rivals at the top of the table as we approach the mid-point of the season. So far, Oxygen have been the only team that has managed to take points off of them and it looks like the world champions are still world-class.

Parabellum was on a roll with wins against both Astralis and XSET, as well as a close 7-8 loss against Oxygen. In comparison, DarkZero had been struggling after losing to SSG and Soniqs. This made it even more surprising when DarkZero put Parabellum down in a 7-3 scoreline, with Canadian leading his team against his two rival Canadian players.

Finally, Mirage put up quite a fight against Spacestation Gaming before falling flat right at the end.

While SSG looked to make short work of their opponents, Mirage started to gain momentum in the first half as Nyx woke up on the attack, something he had consistently failed to do last week. Back-to-back multi-kills meant that his team not only tied but also overtook SSG, going from 1-2 down to 4-3 up.

From here, a triple kill from Melted on Azami meant Mirage were a single round from their first NA League point of the stage… before SSG won three in a row and won the game. SSG had Skys to thank, as he got seven kills in just these rounds to kill Mirage’s hopes in 7-5 fashion.

With this, there are now just two points separating second and ninth place, while TSM is three points clear at the top and Mirage maintains a 0-0-0-4 record. 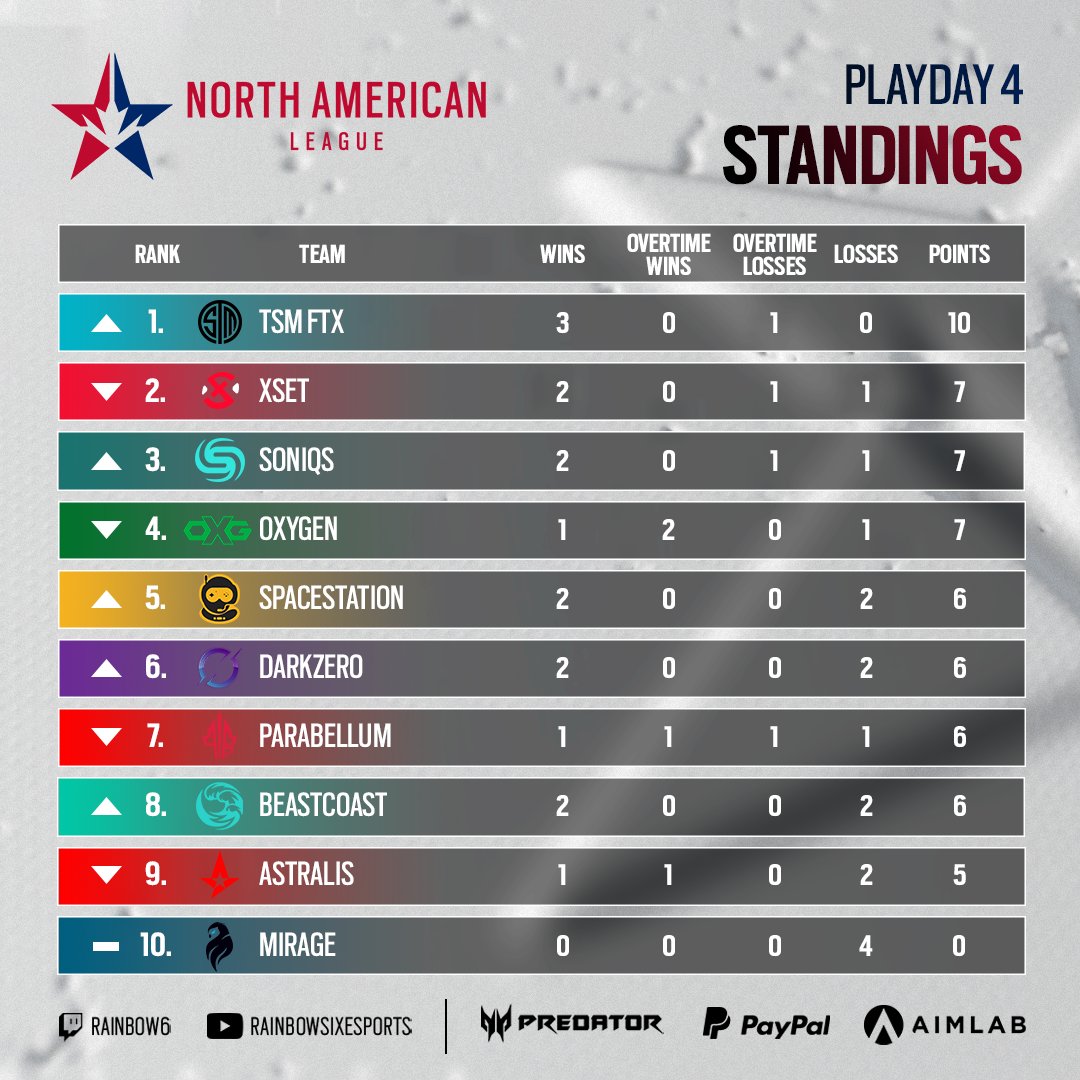