Ever-consistent FaZe Clan, not any other team, should be seen as the clear favourites at the Jönköping Major

Could the Brazilians win their second Major title in Sweden once more?

The end of Stage 3 and the subsequent group draw led Siege fans around the world to get excited about the upcoming Major and do what all good sports fans are great at, rampant speculation.

When speculating about who will be crowned the newest champions of Rainbow Six Siege, six teams seemed to float to the forefront.

Team BDS led the way from Europe, as Théo "LikEfac" Mariano has helped return BDS to their past glory in the region. TSM and Soniqs were touted as winners from North America, as both teams made two remarkably successful changes in September. Finally, both w7m and Team Liquid are seen as favourites from Latin America, as both signed a title-winning IGL each in hopes of finally taking the next step and lifting a trophy.

However, the final team of the six are likely the biggest favourites of them all and deserve a lot more respect; FaZe Clan.

Three months ago, FaZe Clan were one round away from becoming the current reigning Major champions. This is only the second time in Siege history that margins have been this tight and the team that beat them didn’t qualify for the Jönköping Major, making FaZe the best team in attendance on paper.

If they had won this extra round, then FaZe would have been only the fourth team in R6 history to win multiple titles alongside G2 Esports, Evil Geniuses, and Team Empire. They’d also have been the second team to have ever won non-consecutive titles, which shows they can overcome, adapt, and keep to an incredibly high standard over multiple periods and metas. Their first title win came in November last year, also in Sweden, while Leonardo "Astro" Luis and Gabriel "cameram4n" Hespanhol previously reached the grand-finals of the ESL Pro League Finals in Nov. 2018. This is an environment they’re used to.

The team features Brazil’s most successful player, José "Bullet1" Victor, and with Rogue, DarkZero Esports, 00 Nation, and Ninjas in Pyjamas all failing to qualify, this leaves just FaZe and TSM as the only existing title-winners since the COVID-19 lockdowns ended. Furthermore, TSM will be playing with two players who have never competed in official matches outside of North America -- another advantage for FaZe.

This team and its predecessor have also attended more LANs than any other team here. This, along with their title and two runners-up finishes, means that you cannot find more experience than in the Astro and cameram4n duo in this tournament.

All of the above is also notwithstanding the fact they also finished third at the last Six Invitational. Brazil were obviously the best region of the 2021 season, that’s undeniable, but they’ve also been the best of the 2022 season as well.

While no Brazilian team has taken a title across the two Six Majors so far, consistency is the key.

In Raleigh, NA dominated and EU had their worst-ever event. In Berlin, EU dominated and NA sunk to new lows. That’s what the headlines caught. In the background, though, Charlotte saw two Brazilian teams (including XSET) make it to the playoffs and none finish last in their group -- this despite three teams playing online from 2,000 miles away.

Berlin then saw three LATAM teams (including XSET) make it to the playoffs, which led to three of the four semi-finalist teams being Brazilian.

While XSET are no longer in the picture for the Jönköping Major to boost Brazil’s numbers, we should still expect a minimum of three Brazilian teams in the playoffs. The region will be a strong title contender, as it has been for every single global event since visa issues destroyed their chances at the ESL Pro League Season 10 Finals.

With this in mind, let’s take a look forward. What will FaZe contend with?

Wolves Esports have proven themselves to be strong in Europe, becoming the first team to win back-to-back EUL stages. They’ve also had consistently underwhelming performances outside of the EUL.

At the Sweden Major, they finished third in their group behind SANDBOX, which remains the only time in the Korean team’s seven-event history that they’ve managed to achieve a playoff finish. In Charlotte, they were eliminated in the group stage again, this time only beating just Chiefs ESC -- the only team in Major history to finish with zero points.

Finally, in Berlin, they managed a playoff appearance, but only did so ahead of Gaimin Gladiators, the only new organization in attendance, and Oxygen Esports, a team who had already dropped their best-performing player before the event began. Oxygen later admitted the change hurt their performance. Wolves were then knocked out in the quarter-finals by XSET 2-0.

The other two rosters are Mirage, a team making their global debut at this event, and Dire Wolves who, despite an impressive APAC South stage, may have two players (their best player and their IGL) worryingly out of practice. FaZe also hasn’t lost against an APAC South side in almost three years.

Any one of these teams could surprise the Siege world and beat FaZe to the top of Group D. However, the likelihood that multiple of these three teams take down some of the very best in R6 is very low, which means that FaZe should comfortably escape their group. 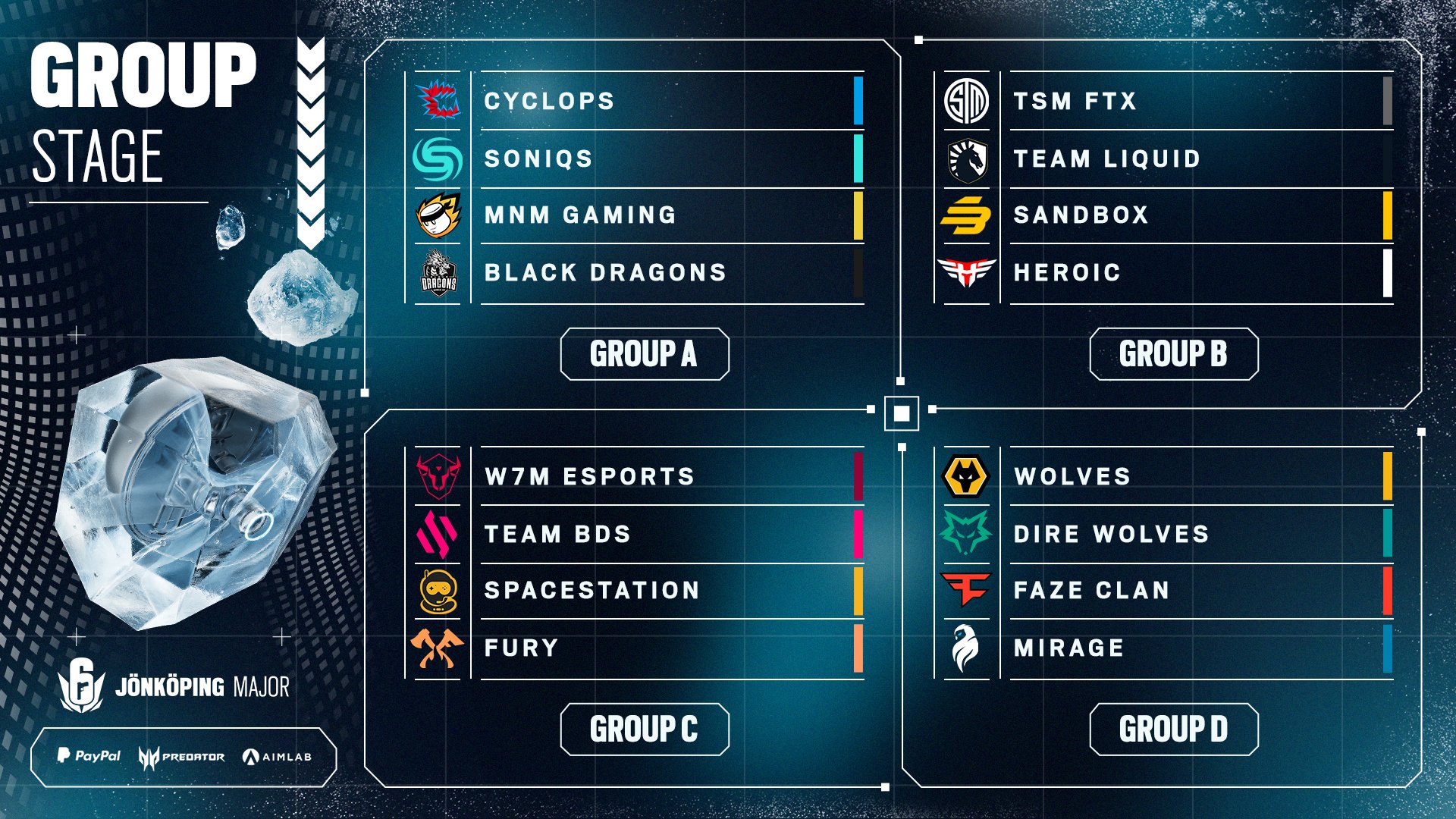 The main reason why FaZe aren’t being rated as highly as the likes of Liquid and w7m by some is their Copa Elite Six performance. FaZe lost to Liquid twice and finished the LATAM playoffs in third place behind these two teams, which put Liquid and w7m (who beat Liquid in the grand-final) in the spotlight.

But, the truth is that these results didn’t matter.

FaZe’s first loss to Liquid came in an 7-8, 7-1, 7-8 scoreline. Losing two maps in 7-8 scorelines during the biggest grudge match in Siege, just two months after losing a Major by a 7-8 scoreline would definitely make their blood boil, but the 21-17 round difference definitely is in FaZe’s favour.

Their second meeting which was just for seeding then ended 0-7, 4-7 which almost certainly means that FaZe weren’t playing to win. A scoreline like this is unheard of for FaZe and comical after the scoreline seen just three days prior. 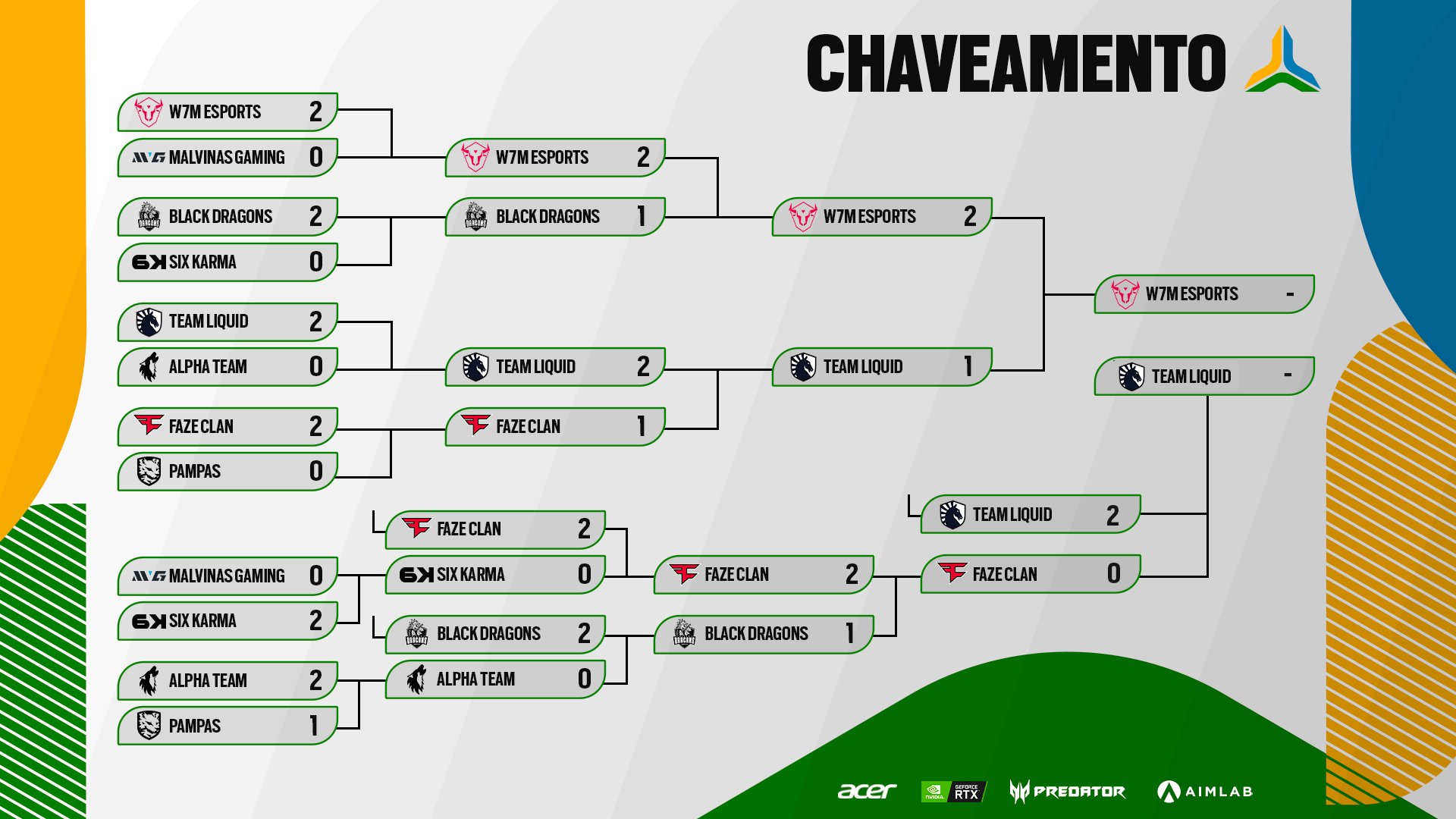 FaZe also did not play w7m in the Copa Elite Six and that becomes very relevant when considering they were one of only two teams to beat w7m during the BR6 League in Stage 3. FaZe also lost 7-8 to Liquid in Stage 3 in the BR6.

When considering how competitive Brazil has been for the last three years, it becomes fairly obvious that the BR6 League is the greatest in the world. It’s on LAN, it’s got a crowd, it’s got the biggest organizations, and whoever wins it is guaranteed to be a title-contender abroad.

With this in mind, FaZe missing out on the Charlotte Major by one point becomes less of a problem than NA or EU teams missing an event, which every one of them but Wolves have done this season.

It’s also interesting to note that during Stage 2, FaZe finished third in the BR6 with four defeats and seven points shy of the lead. Now, in Stage 3, they’re third again, but with three losses and three points shy of first.

On paper, they’ve improved since their one-round defeat in Berlin. All they need to fix is their Round 15 dysfunction, which itself is probably just the cosmic scales correcting themselves due to their 8-7, 8-7 map wins during maps one and three of the Berlin Major grand-final.

When looking at any aggregated statistics for FaZe Clan, they always come across as the most boring team on Earth. This has continued in Stage 3.

In every aspect mentioned, they have normalized further than in Stage 2. That’s good.

Needing standout statistics to perform is bad, because unless you’re Paluh or Shaiiko, those statistics aren’t going to last multiple stages and probably aren’t consistent through a tournament.

FaZe being able to consistently get the results they do without relying on an opening pick every round or for a single player to frag out is what separates FaZe from the rest. Obviously, they can frag at a championship level but it's never on one individual, it's about the team.

So, where will they finish in Jönköping?

Second, third, and first have been where FaZe have finished in their last three global appearances in just the last year. Anyone not listing them as a top-three team in Jönköping  is severely underestimating proven champions -- the smart move is to put them on top.