Breaking down: Where is the G2 super-team struggling?

G2’s had a solid start to the season. Where can they improve?

The pure skill collected in G2’s latest super-team makes the roster one of the most promising to date. While the team will inevitably improve over the coming months, G2 has already achieved some great results as they took league-leaders Heroic to 12 rounds and beat second-placed Rogue, 7-5.

Nevertheless, they still do sit down in seventh place with two top-four teams to play this week; LFO and NAVI. We, therefore, looked at where G2 can improve in order to break into the league’s top four before the upcoming Six Major and found some interesting patterns.

Firstly, on their defensive half G2 has already got the third-highest win rate in the EUL at 56.5%. This figure is behind just NAVI and Heroic and is about as high as you can expect for a brand new team. On the attack, however, this drops down to a 45.8% win rate, the eighth highest in the league and clearly where improvement can be made.

Focusing in on just G2’s offensive rounds, it’s not immediately clear where their gaps are as the team has the best offensive opening record in the league at +7, has the second-best offensive kill differential behind just Rogue, and G2’s Kevin "Prano" Pranowitz has the most plants in the league – seven compared to the next closest at five.

Looking deeper, though, there is an issue with their opening record. In every single offensive round in which they suffer an opening death, they lose. Plus even when they get an opening kill if their opponent can get one back within 10 seconds then once again, G2 lose the round.

This pattern holds up in 23 out of 24 rounds with the odd one out seeing Karl "Alem4o" Zarth make up the difference with a double kill on Ying.

In practice, this means G2 is unable to win offensive rounds that they aren’t approaching in a 5v4 situation. This also means that while G2 is on the attack viewers can predict who will win the round just 10 seconds after the first kill to an accuracy of 96 percent.

For obvious reasons, going down a player early, traded or untraded, puts your team on the back foot, but it shouldn’t mean that the round’s over. In fact, most top teams have a pretty good success rate coming back from an early man down. To show this, here’s a look at these metrics for the league’s current top two teams, Heroic and Rogue.

In 40 percent of offensive rounds where Heroic and Rogue suffered an opening death, they still managed to win. G2 won zero. Similarly, Heroic and Rogue managed to win 75 percent of rounds in which they got an opening kill that was quickly brought back to a 4v4 situation while G2 won just one out of five. These two teams can recover while G2 absolutely needs the 5v4 situation.

So, why is this happening? Well if you break down G2’s player-by-player performance by rounds won and lost the answer’s clear; statistically, there’s an incredible overreliance on Jack "Doki" Robertson during attacks. During winning rounds, Doki has twice the kills of his front-line partners, Alem4o and Ben "CTZN" McMillan, while in rounds lost he’s being shut down way harder than everyone else.

Comparing this to Heroic and Rogue: while there are standout fraggers, there’s a much more even spread of kills during rounds won and lost.

The closest comparison to Doki’s swing in performance in winning rounds is Rogue’s Tom "Deapek" Pieksma, however, he is not the team’s highest or lowest fragger in either case. Jake "Sloth" Brown, meanwhile, is the standout fragger during winning rounds for Heroic, but is also fragging during lost rounds. G2, however, needs that Doki bite.

The reason for this reliance is likely pretty simple; Doki, Alem4o, and CTZN each had the highest offensive entry statistics on their respective teams over the last year. Now on G2 Doki has been able to continue earning these numbers with improved support while his teammates aren’t needed to perform in this area. This means Doki’s in his prime position while the others are still figuring out their place.

Thomas "Shas" Lee and G2 will all be very aware of this dynamic and would have been fighting to change this before tonight’s game. It being sorted is not a guarantee, however, as it’s clearly more complicated than just telling Alem4o and CTZN to pick up the slack in these rounds. They need time to get their coordination and chemistry just right to be able to pull off these attacks even when Doki’s out of the picture. This will almost certainly come, it’s just a question of if it comes too late to challenge for a Six Major spot this stage.

Update (April 11th): During Monday's match against LFO G2 won four out of seven defensive rounds but only two of seven offensive rounds. Between halves, Doki also dropped from second on the team with a 1.08 SiegeGG Rating on defence down to last with a 0.40 rating on the attack implying G2's reliance on Doki performing has continued. 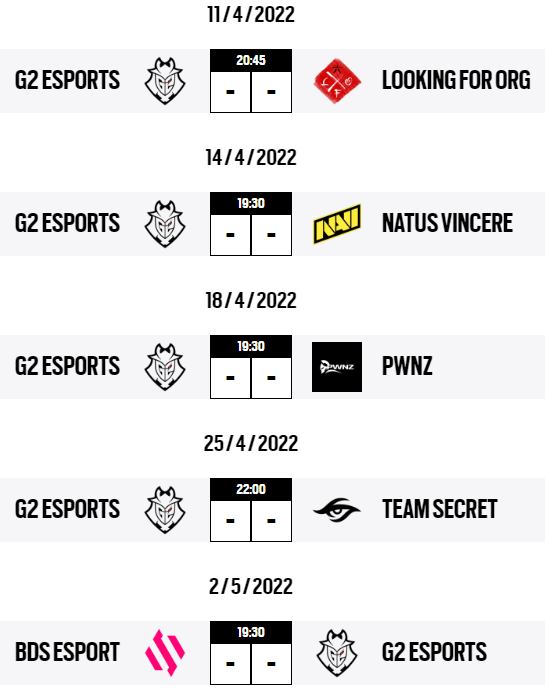