As SiegeGG’s hub for all roster changes in the North American Pro League, this page will be regularly updated with the latest transfer news. Check back here to keep up to date with all upcoming changes and you can check the LATAM, EU and APAC threads for all other changes since the regular season of Pro League concluded.

In a move that has rocked the North American Pro League scene, Team Reciprocity has acquired the Cloud9 Rainbow Six: Siege roster. As they have done that, Lauren "Goddess" William has also been replaced by Alexander "Skys" Magor.

Few would have expected this to happen, especially with the fact that Cloud9's roster had recently moved into a team house together. Together, the players' crowning achievement has been their win at DreamHack Montreal which also saw them qualify for the 2019 Six Invitational. However, in the Pro League they only narrowly avoided the relegation zone after finishing 6th in Season 8 -- their first season in the top-level competition.

Team Reciprocity, on the other hand, does not have a massive fanbase like Cloud9 but is perhaps most famous for their Halo roster featuring SNIP3DOWN and Pistola which finished joint third in the Halo World Championship tournament last year. Their acquisition of the Cloud9 R6 roster marks the first major new organisation in Rainbow Six in 2019.

With the acquisition also comes the reunion of Skys with Gabriel "LaXInG" Mirelez at the expense of Goddess. Together, the two had been on Elevate and later Counter Logic Gaming before being relegated in Season 7 by Beastcoast -- the very roster that would become Cloud9, and now Team Reciprocity. Under Elevate, the duo had got as far as the Season 5 Grand Final but had been brushed aside by PENTA Sports (now G2 Esports). Goddess, for her part, will be joining Elephant Gang in the Challenger League and will be attempting to qualify for the Pro League once more.

Sam "MahMan" Pak has been officially confirmed to have joined the ex-Noble esports roster, seemingly replacing outgoing member Matthew "zz" Legg. The announcement comes without much fanfare as MahMan had been playing on the ex-Noble esports squad for over a month in the North American CCS division.

MahMan, like Noble esports, had a tough Season 8, with his old side of Obey Alliance suffering relegation to the Challenger League after lackluster results throughout the season. Of those five players, MahMan is only the second to find a place on another team after Obey had disbanded.

With this move, MahMan will once again be playing aside former eXcellence Gaming teammate Bryan after the two had made it as far as the LAN Finals in Season 5. Unfortunately, eXcellence had suffered a heavy 10-2 loss against PENTA Sports (now G2 Esports) despite being the NA first seed. The two will now continue their journey in the Rainbow Six Pro League and attempt to help their new team improve their standing for Season 9.

The roster previously known as Noble Esports has dropped their coach, Beau "Knightmares" Russell, after he had been phased out for the last few months.

The roster of Yeti, Acid, breezy, Krazy, zz, heavy and Knightmares had a rough Season 8 as they narrowly avoided a trip down the Challenger League after a 7th place finish in the Pro League followed by a close 2-1 victory over Elephant Gang in their relegation match. Now, in a Twitlonger, Knightmares stated how since the mid-Season break he "put everything [he] had into working" at his day job with the newly introduced head coach of Noble, UnrealGS, taking most of his roles within the team making this move to drop Knightmares an unsurprising one to him.

The Ex-Noble roster will play their next game on Friday as they start their Pro League Season 9 campaign against Rogue.

Franklyn "VertcL" Andres Cordero has joined Rogue to replace Supr two weeks after leaving mousesports (now known as Rise Nation). VertcL had been on the Mouz roster since Season 6 but, after finishing Season 8 in a disappointing 5th position, has left to join the second-placed NA team of Rogue.

Rogue has been the perpetual #2 team in North America for around a year now falling to Evil Geniuses at the Six Invitationals, the Six Major and twice during Season 8 but, after a weak showing at Rio by EG, Rogue will likely be confident that their newest lineup of Ecl9pse, Slashug, Easilyy, Shuttle, VertcL and Ranger (their coach) can finally push them to the #1 position.

The brand new organisation of DarkZero Esports has acquired the roster of SK Gaming of Mint, Pojoman, Hotancold, Jarvis, Nyx and BKN (their coach) with th ex-Evil Geniuses player of BC also joining as a coach.

This roster ended both Seasons 7 and 8 in the third position, just outside of the LAN spots, and had a somewhat successful run at DreamHack Montreal where they knocked out the reigning Champions, Team Secret. They now join the newly created organisation of DarkZero Esports for Season 9 of the Pro League.

As a previous player for The Nomads, Tomas played in Season 8 of the Challenger League finishing the season in fifth place, just outside of the playoff spots. He now joins the newest team to enter NA Pro League, Excelerate Gaming, as their only member of staff of yet.

Three months after joining, Seth "supr" Hoffman has left Rogue and will play at the upcoming US Nationals LAN on his previous team of Elephant Gang.

Supr joined Rogue alongside Shuttle to replace the departing players of Geoometrics and Bryan just after the Paris Major and has earnt mixed success since. Rogue finally managed to defeat Evil Geniuses at DreamHack Montreal - only to fall to Cloud9 in the final - and qualified to the Season 8 Finals after a tight final playday - only to get first rounded by Nora-Rengo.

The remaining players in Rogue of Ecl9pse, Slashug, Easilyy, Shuttle and Ranger (their coach) now have spots at the upcoming Season 9 of the Pro League, the US Nationals, and the Six Invitationals to look forward to which they will play in without supr.

The roster of Noble esports, which narrowly avoided relegation during Pro League Season 8, has left their organisation with no replacement lined up of yet.

Noble initially made it into Pro League after winning Season 7 of the Challenger League and then defeating the Pro League team of Motiv8 Gaming in the relegations. The roster of Yeti, zz, Krazy, breezy and Acid had a rough Season 8 but, thanks to a last minute victory over Mousesports, they survived the auto demotion and remainined in Pro League.

They will now play Pro League, CCS Season 4 and the US Nationals Finals without an org to represent unless they find a replacement.

As well as this comes a tweet from Bryan - an ex-player for Rogue who left SSG a few weeks ago - which effectively confirms he's joining the ex-Noble roster. It is, however, unknown of yet who he's replacing.

The remaining players of the previous Mousesports roster - England, Vandal, Beastly and HypeR - has joined the Rise Nation - an organisation primarily known for their involvement in Call of Duty esports.

This comes after the roster left Mouz earlier in the week with VertcL and Morxzas, their coach, leaving the roster as well. To replace VertcL comes Ghxst, a previous player for Elephant Gang from Season 7 of the Challenger League, who will make his Pro League debut alongside his ex-teammate of HypeR.

Rise Nations next games will be in early December in Pro League and CCS with an appearance at the USN Finals in mid December to also look forward to.

One of ex-mousesports' key players, VertcL has left the team not long after the roster had announced the split from the organisation. This comes as a significant blow to the team, for VertcL was considered one of the top talents in the roster. He has announced that his departure is for another Pro League team, widely rumoured to be Rogue, but the team's identity is not confirmed as of yet. 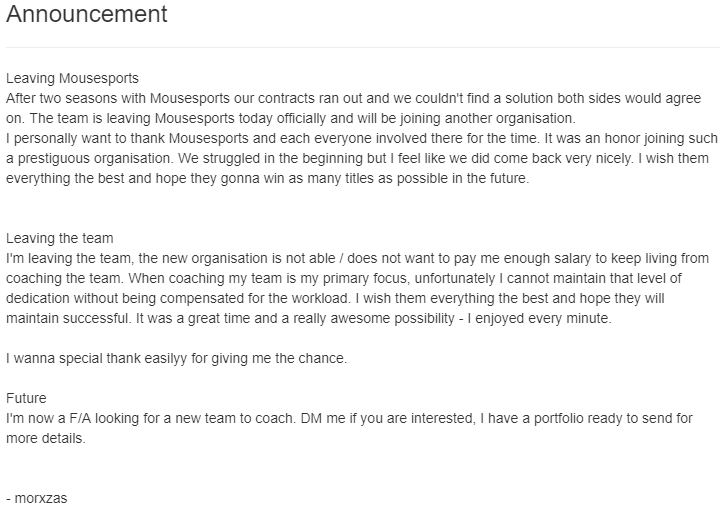 The mousesports roster of Beastly, vandal, VertcL, Hyper, England and morxzas (their coach) has left the organisation after two seasons under their banner. After acquiring the previous roster of 1nfamy (then known as Bird University) mousesports participated in both Season 7 and season 8 of Pro League, finishing in fifth place both times.

Along with the org announcement came a change to the lineup with morxzas leaving the roster after a year with the team. As seen above this is due to the new organisation being unwilling to pay his salary forcing him to leave the role on the team. This would be a huge blow for the lineup as only a very few serious Pro League teams lack a coach with many rosters including multiple support staff.

After leaving the roster for a grand total of four days, Gabriel "LaXInG" Mirelez has rejoined Cloud9 for the forseeable future.

After joining the roster during the mid-season transfer period after the Paris Major,  Bryan "Bryan" Agema has already left Spacestation Gaming to be replaced by Dylan "Bosco" Bosco. While on the roster Bryan aided SSG to a fourth-place finish in the North American Pro League, however, achieved an abysmal 0.74 SiegeGG rating, the lowest of any player in NA.

The team will, therefore, be hoping that the addition of one of Obey Alliance's star players, and another alumnus of the Y1 Xbox Invitational Champions, Elevate, will help push SSG up into the top two positions in NA that they held for much of the first half of Season 8.

After finishing in the last position during Season 8 of the Pro League and being automatically demoted to Challenger League, Obey Alliance has dropped their roster of Bosco, MahMan, Skys, Adam and Benji. This doesn't come as a surprise for many people as many of the players were already saying goodbye to their teammates and with Skys already announcing his intention to leave the team earlier in the week - it is unknown at this time whether the remaining players will stick together and compete through the Challenger League or whether the team will disband similarly to CLG last season.

After a fairly promising second half of the season which saw Cloud9 win North America's first international title in 18 months at DreamHack Montreal, the team has decided to drop one of their star players, Gabriel "LaXInG" Mirelez. LaXInG previously, alongside Skys, also won the Y1 Xbox Invitational, made the grand-final in Season 5 and was demoted during Season 7 while on CLG. LaXInG, however, spent this season away from Skys on Cloud9 alongside FoxA, Goddess, Retro, Shlongii and then MarkTheShark.

This move to drop LaXInG comes as a shock to many fans and LaXInG himself as he achieved the second best stats on C9 this season as was seen as a star player of the team - it is unknown who will replace him off yet.

After a disappointing season, the ex-Xbox World Champion has left Obey Alliance with an intention to start coaching. Previously, Skys won the Year 1 Xbox Invitational title on Elevate before being picked up by Counter-Logic-Gaming after finishing in second place in season 5. After a number of disappointing results, CLG was then demoted from the Pro League and disbanded in Season 7 leading Skys to join Obey Alliance for Season 8. Now, following Obey's demotion from Pro League, Skys has stated that his career as a player has come to an end.

This article will be updated with changes as they happen, check back here or keep track of updates from SiegeGG’s Twitter account.