Catch up on what happened in Week 3 of BeNeLux Season 2.

Auxilium was unable to field a complete roster for the game and so forfeited the game. Trust Gaming, therefore, gains an automatic 6-0, 6-0 victory to keep their undefeated run intact.

The first map started off with the teams trading rounds back and forth until round five at which point, despite a triple kill by Dildosor, Demise managed to gain the first two round lead of the matchup which allowed them to run away with it. A triple kill by sNKy in round six followed by two 4ks in round seven and eight completely shut down OG SQUAD’s attacks ending the map 6-2.

The next map of Bank continued with just as map one left off with Blaz achieving a spawn peak less than a second into the round as well as a further two kills as OG SQUAD tried to enter the main building. Successful spawn peaks and entry frags from sNKy and Blaz meant Demise won most rounds very comfortably ending the map 6-1 and so the series 2-0 in favour of Team Demise.

14 kills in just seven recorded rounds from Krxks, which included two 4ks, helped DiversityGG gain the first map despite a weak performance from the rest of his team. The second map was marred by four total teamkills, two from each side, as the intensity started to get to both teams. Cryptick took the initial lead going up 5-1 before Diversity mounted a comeback on defense, particularly thanks to RiPro who achieved the first ace of the day to bring the game to overtime. Here two triple kills by Rhino and Dopey shut out the map 7-5 for Cryptick

This meant we went to the decider map of Oregon in which Diversity started off well on going up 2-0 before Cryptick came storming back. Round 3 saw Rhino win a 1v4 situation by stopping the plant from going down with his Yokai drone, a feat Krxks had achieved the map beforehand, which led to a number of increasingly convincing victories by Cryptick allowing them to lock down the map 6-3 and so the series 2-1.

In one of the most bizarre games I’ve ever watched, a total of twelve rounds were played out in a 4v5 or worse situation due to players being “kicked by BattleEye” due to a bad internet connection. Across the three maps five players were removed, some of which on multiple occasions, before the game was delayed to the following day. This, however, did not help circumstances as two players were unable to play on Thursday forcing the final three rounds to be played out in a 4v4 situation.

The game itself looked as if it was going firmly in MnM’s direction as they took Coastline 6-2 and was up 4-1 on Border before SoulseakeR was kicked and couldn't rejoin back forcing them to play a man down and giving Flash Point a chance to get back into the match. Despite losing a player of their own in the last few rounds, this advantage allowed them to bring the game to overtime where they took two convincing rounds in a 5v5 situation.

These issues seemed to have resolved themselves up until round six of the final map in which, as MnM was down 2-3, Theo disconnected giving the round to Flash Point and forcing the game to be delayed to the following day. Standout plays in these final three rounds by HzDef allowed Flash Point to finally end the map 6-3 and so matchup 2-1.

And so after the first three playdays of the season here are the current standings: 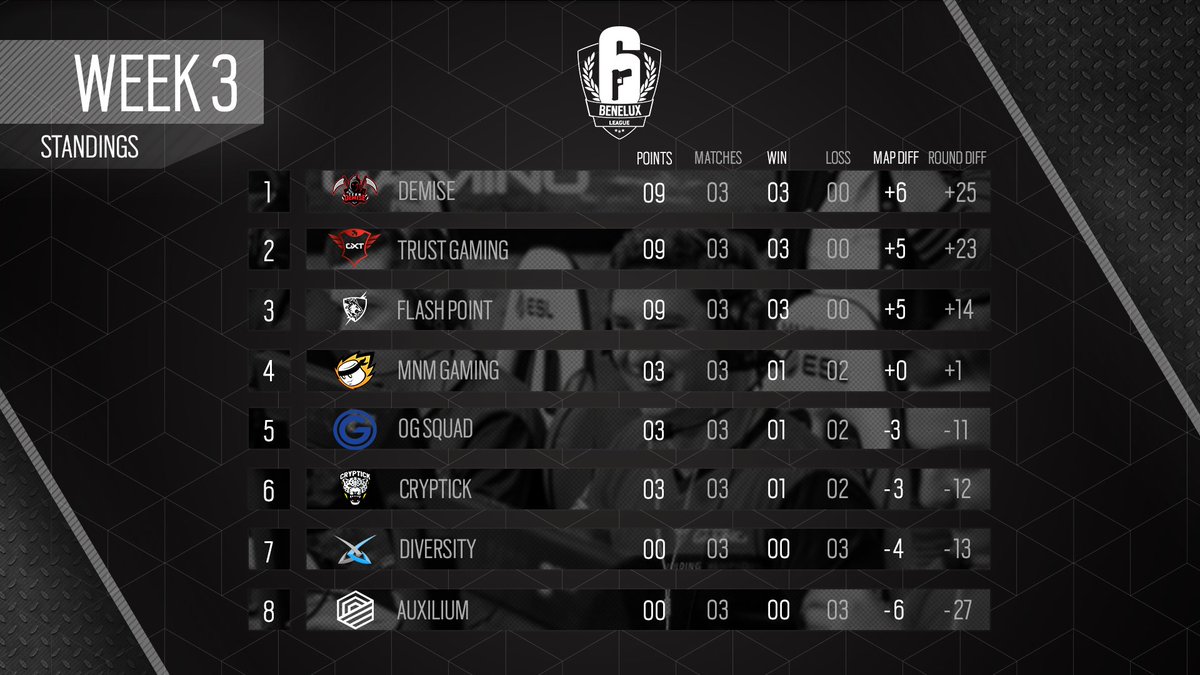 Be sure to catch Week 4 of the BeNeLux League Season 2 on the official Twitch channel at 7pm CEST next week on the 17th of October. To see all the upcoming game schedules, go to our Matches page, and check out completed games stats by clicking on the individual games.