Find out what happened on day 10 of European Pro League

In what was a highly anticipated match between two middle of the pack teams, the most shocking result of the day occured in the form of Mock-it squashing their rivals Penta in an incredibly convincing manner. Due mainly to a wonderful individual performance by KS as well as good team play overall, Mock-it jumped themselves all the way up to second place, while knocking Penta into lowly fifth place. However, with matches against G2, Team Secret and Millenium coming up fast, Mock-it must play to the best of their abilities if they want to hold onto their second place position.

In a battle between French giants, Vitality came out strong on the defensive side, going up 3-2, a promising start for the current seventh place team, however, in typical Vitality fashion, they were less than stellar on attack. After wasting allot of time Vitality lost the following four rounds ending the game 6-3 to Millenium. This victory pushed Millenium back up into the top half of the standings, after residing in fifth after last week’s matches.

In a match between two LAN contenders, the ever dominant G2 came out on top of challengers Team Secret. While not a wholly surprising result, Team Secret did manage to hold their own against the World Champions winnign three rounds on defense. This result put G2 in such a position that even should they lose all of their remaining matches, they would still be headed to Rio. On the other hand, this loss dropped Team Secret into third place but with matches against teams much further down in the table such as Chaos and Supremacy, as well as a direct matchup against the second placed Mock-it, the LAN dream is surely still alive for Team Secret.

In a game between two relegation contenders, a win was a necessity for both teams. However, where Chaos rose to the challenge, Supremacy once again folded in their best bet to get any points for the rest of the season. And, while it’s not set in stone yet, at eight points from safety from relegation, and with matches against G2, Millenium, and Team Secret left to go, it looks unlikely that Supremacy will survive relegation. Conversely, this win for Chaos put them in sixth place, one point above Vitality and the relegation zone.

These are the standings in Europe after 10 playdays: 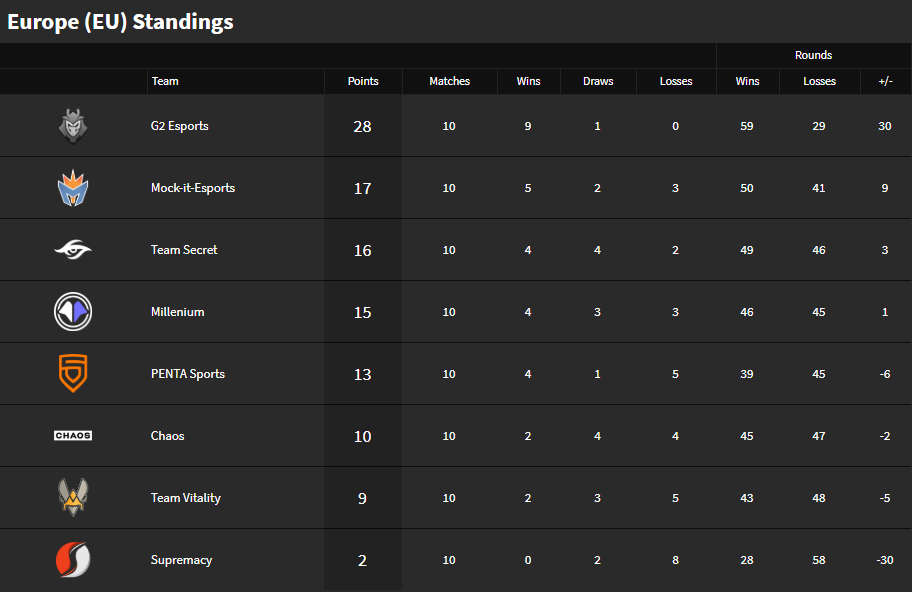 Be sure to catch Day 11 of European Pro League on the official Twitch and YouTube channels on Thursday, October 4th at 1 pm EDT/7 pm CEST/2 pm BRT. To see all the upcoming games schedules, go to our Matches page, and check out completed games stats by clicking on the individual games.