Catch up on what happened in Day 5 of Latin American Pro League.

To start off Play Day #5, PaiN Gaming and Immortals would battle on Bank. This match would go back and forth from whichever team could not effectively deal with roamers. Both squads found themselves going between consistent team play to pick up kill trades and take decisive rounds, or pushing 1 by 1 with no map control gained. A 5-5 tie keeps PaiN gaming away from the bottom of the standings, and leaves IMT still in a battle for top 3.

For our second match of the day Team oNe and FaZe Clan would bring us onto Oregon. T1 would ban Ying and Echo while Faze banned Glaz and Smoke. FaZe would start this game off with a double shield push through the Tower side of the laundry room, but Team oNe would hold an advantage throughout this wild matchup. FaZe has struggled to find consistency this season as they now sit at 2-1-2 and Team oNe is able to overtake them in the standings.

The third match of the night featured current PL champions and leaders of their region, Liquid facing off against Black Dragons. TL banned out Thatcher and Mira while BD chose to remove Ying and Mute. Black Dragons got off to a strong start by trading a few rounds with Liquid and it looked like we might have an interesting game on our hands. However Liquid would quickly come into form and solidify their spot at the top of the standings with a 6-3 victory.

The final match of the night granted the NInjas their first victory this season moving them out of a last place tie. NiP removed Thermite and Echo from this match, Bootkamp then decided to ban Lion and Mira. NiP would start off incredibly strong until round 5 where BKG would pick up 4 defensive rounds in a row to make things interesting. The match however would end 6-4 as NiP was able to clutch up with some solid pushes to take the win.

These are the standings for LATAM Pro League after 5 games: 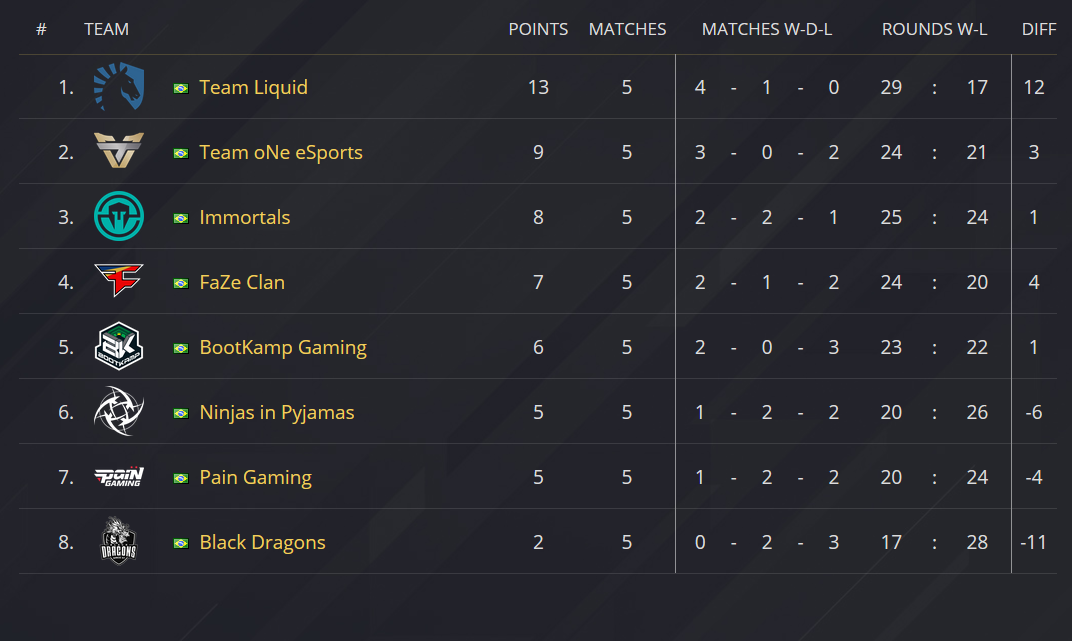 Be sure to catch Day 6 of LATAM Pro League on the official Twitch and YouTube channels on July 25th at 7 pm BRT and 6 pm EDT. To see all the upcoming games schedules, go to our Matches page, and check out completed games stats by clicking on the individual games.