The roster of Avian, Benji, Kanine, MarkTheShark and Supr will aim to qualify for the upcoming Season 8 Challenger League, and the Paris Major.

The team of free agents going under the name of “Elephant Gang” will most likely be the most experienced group in the qualifiers with every member holding past Pro League experience.

The most experienced member is arguably Kanine, who has played in 4 different organisations since Season 1. He had played on Team Orbit alongside KiXSTAr and Canadian, which finished in 2nd place during the Season 2 LAN Finals, and eRa Eternity in the Year 1 Invitationals coming as runners-up behind Continuum (now known as Evil Geniuses). Following that, he found himself teamless for two seasons, before returning to a new eRa Eternity roster for Season 6 and 2018 Six Invitational.

He will be rejoined by old eRa teammate Avian, who had previously played with the team now known as Rogue. Active with them from Season 3 to 6 with a fair level of success; he had qualified for the Pro League LAN Finals on 4 occasions, with the best result being during the 2017 Six Invitational where his team finished in second place. Same as Kanine, though, he found himself without a team after the 2018 Invitational and will be relishing this new opportunity.

MarkTheShark, however, is much newer to the scene, having only played in the Pro League during Season 7. Here he, with the mousesports roster, finished in joint 5th place after losing to SK Gaming twice but managing to beat CLG. Prior to this he played in Season 6 of NA Challenger League with the team Ambition Esports finishing in 4th place.

Alongside Mark, Benji also finished joint 5th in his Season 7 PL debut with Obey Alliance, as his team lost twice to Spacestation Gaming, however, managed a convincing 10-3 victory over Ronin (now known as Motiv8 Gaming).

Supr, meanwhile, has also played in just one Pro League season under eRa Eternity in Season 6. Here, alongside Kanine, his team was only able to manage a disappointing 3rd place in its group. However, they then rebounded and managed a hugely impressive run in the 2018 Six Invitational Open Qualifiers, in which they came first and qualified for the main tournament in Montreal. Disappointingly, however, eRa came last in Group D after losing to both ENCE and eiNs and did not make it to the main stage. 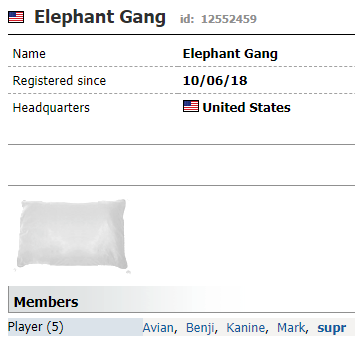 The team, therefore, holds a large amount of promise, and so when asked about their chances, Supr had this to say:

I’ve seen some people mention this team as a PUG (Pick Up Game) team, but in truth we are all taking this seriously and have been spending hours every day preparing for the qualifiers. I think every player on this team feels slighted and overlooked by other teams who have picked up replacements with less of a track record, less experience and frankly, less skill, due to personal and other reasons and we hope to prove a point.

We hope to qualify for Challenger League and are also planning on playing through the Paris Major qualifiers, which Kanine and I won the Invitational version of on eRa in December. We have been scrimming and taking maps off of Pro League teams with only days of practice and I believe we have the potential to become one of the best teams in North America as we develop chemistry and timing.

The team will now continue their preparation for the Challenger League and Paris Major qualifiers with both events being delayed “until further notice” due to issues with the most recent update.