How did Osa perform in SI competition?

Breaking down the newest operator to the competitive circuit.

After being released back in September, Osa officially arrived for competitive play with the Six Invitational qualifiers in January and the main tournament in February. This was our first chance to see the best players in the game try out the operator in a competitive setting.

Here’s everything we learned about the operator from these games including who brought her and where she was successful.

Firstly, Osa has had a 3.41% pick rate by the 20 teams who attended the Six Invitational 2022. This makes her the 19th most “present” (pick rate plus ban rate) attacker and 37th most present overall operator. This sits below operators such as Nokk, Zero, Oryx, and Warden but ahead of Ash.

In total, Osa also had an exact 50% win rate which is effectively tied to the 50.03% attack win rate seen across the whole Six Invitational.

Osa was most used by Team Liquid and CYCLOPS, with the latter team playing her extensively during the SI qualifiers as well as the main event. TSM, Empire, DWG, MNM, NAVI, SANDBOX, BDS, and oNe have yet to play Osa at all. MIBR banned Osa the most.

The entire European region has played Osa just twice, both by Rogue’s former player Kevin "Prano" Pranowitz, with him winning both rounds. LATAM played Osa by far the most.

Osa was most used and most successful on Bank and Coastline, where they won around two-thirds of the rounds she was picked in. Even Osa’s most popular map, Bank, only saw her played in 10.26% of rounds. 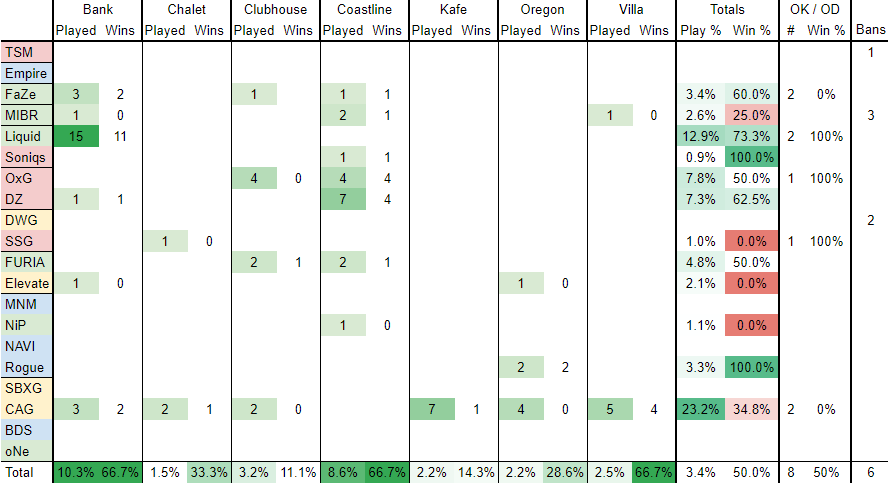 As seen above, Osa was only picked more than 10 times on two maps — Bank with 24 picks and Coastline with 18 picks. Let’s look at these in more detail.

Starting with Bank, Osa was almost flawless while attacking the downstairs CCTV objective with eight wins in nine attempts. This includes Liquid, who went flawless on three out of four of the sites but struggled on the Kitchen objective.

In 14 out of 15 of Team Liquid’s lineups on Bank which included Osa, she was picked alongside Buck, Iana, Ace, and Zero. The 15th round saw Sledge be picked over Buck. She likely would’ve been picked more however in Liquid’s final two Bank games of SI 2022 against TSM and MIBR their opponents banned Osa against Liquid in what was clearly a targeted ban.

Looking into how she was used, it’s no wonder the LATAM teams warmed up to her the quickest as they used her as a walking drone to clear large parts of the map, something teams tend to struggle with a lot on Bank due to it being such a large map.

“Face checking” through a map behind a shield was a signature LATAM strategy way back in 2017 as LATAM became the first region to properly make use of Montagne. Now Liquid in particular has brought back the idea for Osa.

Another notable Bank-specific thing to note is how Osa’s Clear Shields were being used as in only one case was the defuser planted behind a shield, in every other case the shields were used to help in post-plant scenarios.

Finally, for Liquid it was Pablo "resetz" Oliveira who picked up Osa as a direct replacement to Zofia. For CYCLOPS Reon "Anitun" Sakai was the team’s Osa player with him being the roster’s flex player best known for his Montagne picks. Finally, the only other team to pick Osa more than once on this map was FaZe with whom Leonardo "Astro" Luis replaced Zero with Osa.

The Billiards/Hookah objective saw the most success from Osa with an almost flawless record on the site once again. In contrast to Bank, Liquid opted not to bring Osa on Coastline with the North American teams of Oxygen and DarkZero leading the way here.

While Bank saw just a single player be the dedicated Osa player, this was less the case on Coastline with Tyler "Ecl9pse" McMullin and Troy "Canadian" Jaroslawski both selecting Osa for DarkZero while Gabriel "LaXInG" Mirelez and Davide "FoxA" Bucci selecting her on Oxygen.

Here, due to the map being much more linear, Osa wasn’t deployed as a “walking drone” and instead was used to neutralize a number of key lines of sight the defenders have.

The Hookah and Bar sites in particular are fairly claustrophobic for the defenders giving them little room to rotate. While this usually comes with the benefit of funneling attackers through select kill zones such as the Pool Entrance doorway, an Osa can cross these entrances behind her shield without being shot. This somewhat neutralizes the defenders' main advantages.

FoxA in particular used this to his advantage to get three plants down in four attempts, winning all four rounds.

The reason why Osa’s picked so little at this level is somewhat obvious when you look at her loadout. She lacks any destruction whatsoever. 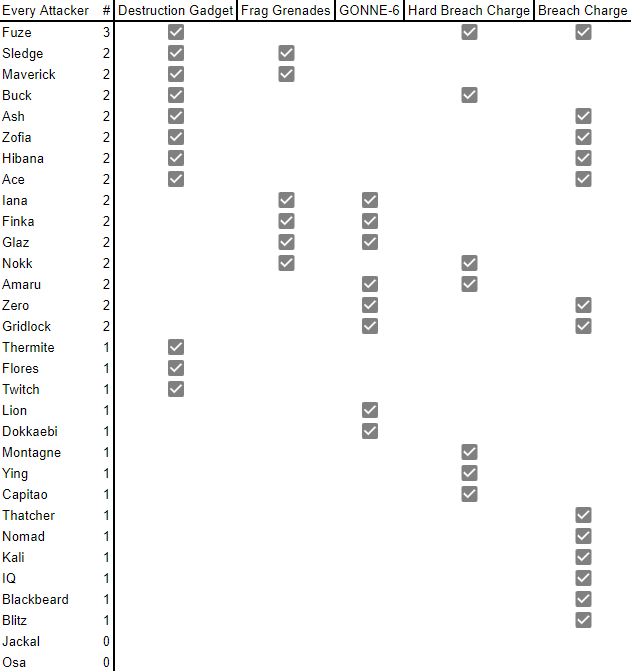 In fact, the only other attacker with no destruction gadgets or Frag Grenades is Jackal who at least comes with a secondary shotgun that can act as a Breaching Charge replacement.

This makes the cost of picking Osa a lot higher than other operators, meaning you must really have a plan for Osa’s Clear Shield. And it seems like only CAG and Liquid has come up with so far.

Despite this, the numbers suggest that Osa was helping when she was brought in select circumstances. 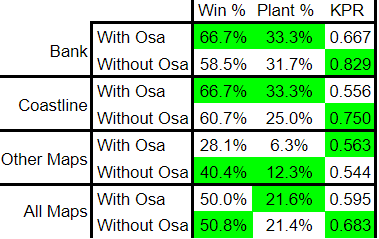 Both Bank and Coastline sees bringing Osa lead to a higher plant rate and win rate compared to bringing other operators despite a decreased number of kills. While the difference in win rate is only about nine percent, that’s the difference between a 6-6 match and a 7-5 win (50% compared to 58.3%). Across a whole tournament, this would really add up.

On the other hand, Osa’s appearances on the other five maps are not helping. A much more notable drop in plant and win rate compared to rounds without Osa shows teams haven’t built these required specialized strategies here yet. Osa’s just a Bank and Coastline operator right now.

Whether these successes can be replicated with a higher pick rate is still yet to be seen. It’s possible Osa works on these maps because she’s new and teams have yet to adapt around her. Or it’s possible this success can be replicated on all seven maps once time has been put in to learn how to work with her. We’ll get to see the answer through Stage 1 of the 2022 Season when it kicks off later this month.