As the NA SI 2022 Qualifiers ran long, six APAC teams got ready for games that they, perhaps, may consider more important than the Six Invitational itself.

The games may have initially been shifted to the secondary Rainbow6Bravo channel, but there was no mistaking the prestige of these matches, starting with ORDER vs The Last Dance in APAC South, and REJECT vs Sengoku Gaming in APAC North.

Both the Japanese teams were fighting for the third and final spot in the APAC North Division for 2022, added just a few days before the start of the APAC Relegations.

Sengoku Gaming had been strong favorites on their side of the bracket and were expected to take down even FAV gaming. They had finished second in the Japan League 2021, eight points ahead of REJECT in fifth, though both had been joint-ninth in the Japan Championship 2021.

Eager to shake off their 0-2 loss to FAV yesterday, Sengoku started strong with a 4-2 defensive half on Oregon and converted it into a 7-4 win. But REJECT responded in kind on Clubhouse, going 4-2 on the defense and then winning 7-4, too.

It seemed like the script was stuck on repeat, with the decider of Kafe also having a 4-2 defensive half for REJECT. But while the past two maps had some fight from the losing teams, there was no such resistance here. Sengoku crumbled, with former Nora-Rengo man Jun "NoTimeGG" Matsuura taking down former NR duo Ryuki "Ramu" Matsuoka and Yuta "ReyCyil" Inoue, and confirming REJECT’s place in APAC North for 2022. 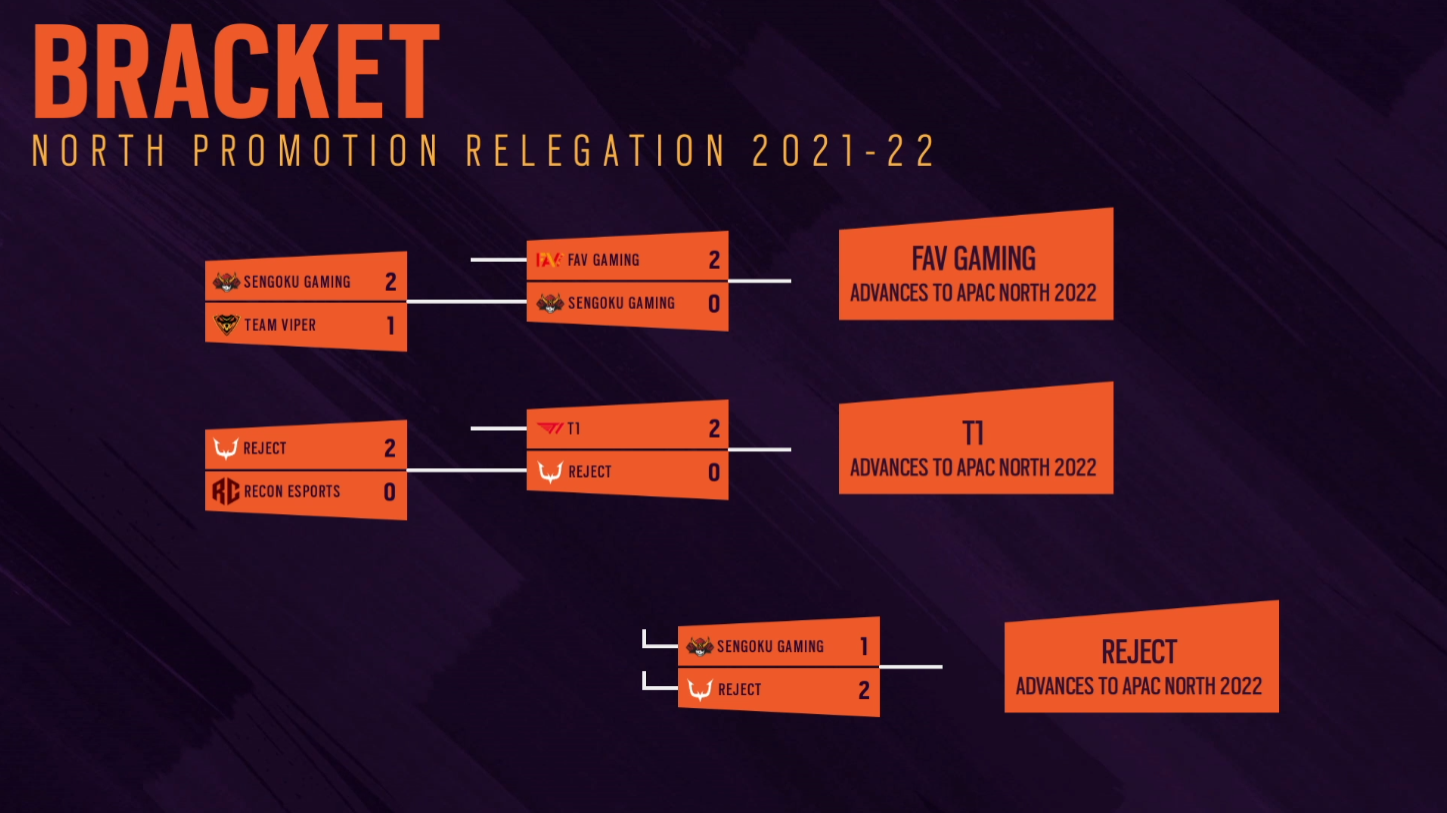 The upsets were not limited to APAC North, though, with ORDER expected to make short work of the fairly unknown The Last Dance. TLD had played two BO3 matches in the past two days, and had taken down Monkey Hunters 2-0 and strong favorites Team Bliss 2-1.

While the first half on Chalet was fairly even, ORDER managed to pull a two-round gap to lead 5-3. TLD, however, used their tactical timeout well, and came back extremely strong, reeling off four rounds in a row to take the first map 7-5.

ORDER got started well on Bank with a 3-0 lead, but that was effectively all TLD conceded. Helped along by a healthy dosage of poor flank watch from ORDER, TLD came back to win the map 7-4 and replace ORDER in APAC South for 2022.

While TLD and REJECT had been impressive underdogs, ROFLCOPTER GG could not emulate them against Wildcard Gaming.

The final match started on Coastline, and Wildcard looked to carry on from their Oceanic Nationals relegation defense with a 4-2 attacking half. ROFLCOPTER couldn’t replicate that form on their attack, and Wildcard took their first step towards safety with a 7-3 map win.

It seemed like it was set to be much of the same on Villa, as Wildcard swept to a dominant 5-1 lead and secured match point at 6-1 after a rush and plant. But calls for a CPR professional began to intensify as ROFLCOPTER fought tooth and nail to avoid stalling out.

The challengers pulled things back from that deficit to an incredible 7-6 and were looking good value to force the third map. But Wildcard showed their experience and hung on, reversing the momentum and managing to retain their APAC South spot with a heart-stopping 8-7 map win. 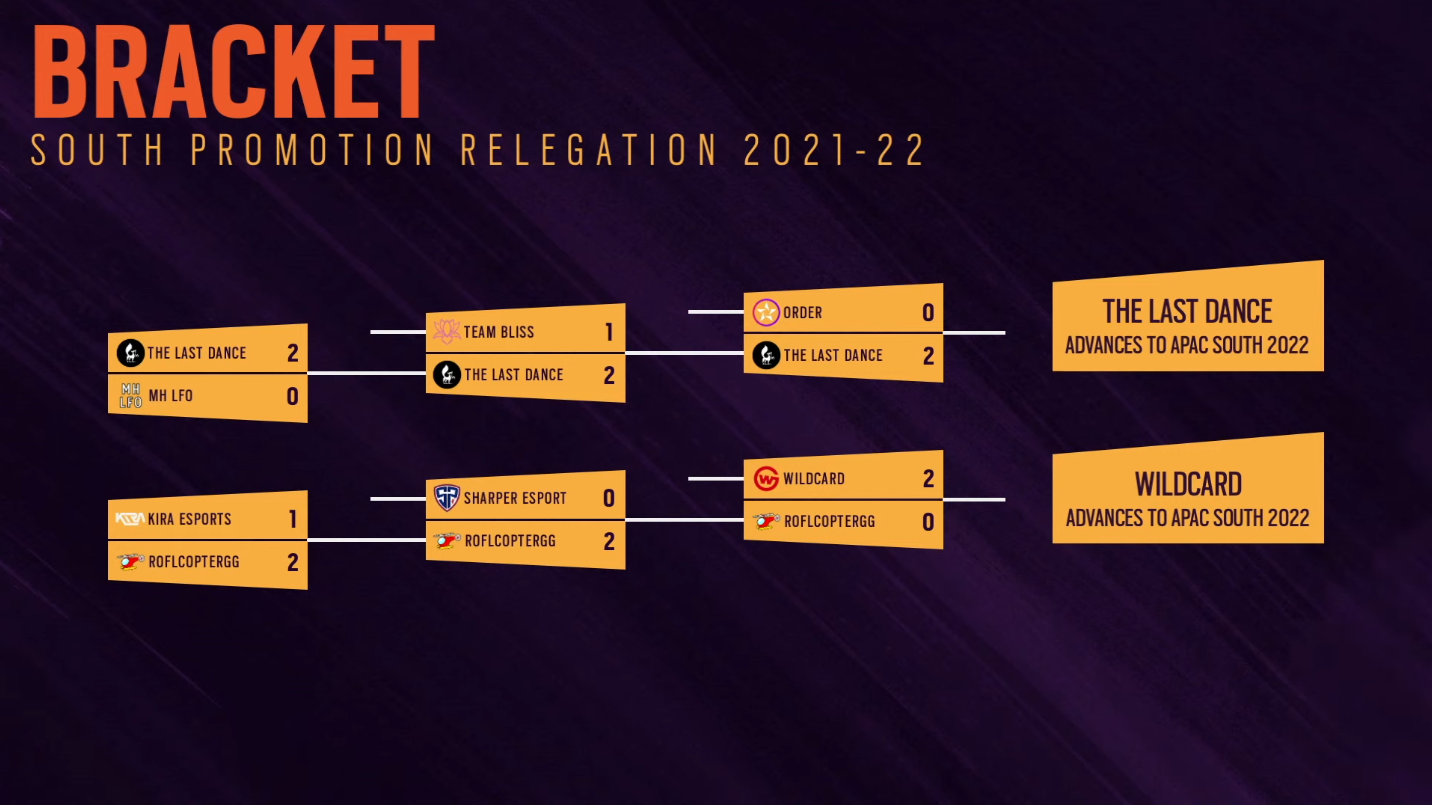 While APAC South’s eight teams are thus confirmed, it is still unclear which of the six APAC North teams -- aside from T1 and FAV gaming -- will not be continuing in 2022.

Shortly before the weekend, a third promotion spot had been mysteriously added to the APAC North bracket. Though GUTS had announced a withdrawal from competitive Siege the next day, its roster could keep its place in APAC North if it can find a new organization for 2022.

The tentative 2022 lineup of APAC teams are: