Rogue won in two nailbiter maps and also qualified for SI 2022 with the result.

Rogue defeated Team oNe 2-0 (8-7, 7-5) with a pair of nailbiter victories on Kafe Dostoyevsky and Oregon.

With the victory, Rogue also qualified for the Six Invitational 2022: an honor that's been a long time coming for two key members of their team.

"Especially for [Matthew "meepeY" Sharples] and I, It's been a long four years," said Leon "LeonGids" Giddens when asked about his emotions following their SI qualification during a post match press conference. "...Being able to finally do that together is probably one of our achievements in Siege completed."

MeepeY and LeonGids have a storied history of deep Major runs. In the three Majors the pair have qualified for, they've reached the semifinals all three times.

However, the jolt to the current Rogue makeup happened after the addition of Kevin "Prano" Pranowitz before EUL Stage 3. At one point, Prano led the entire Major field in KOST% and total number of plants -- he leads in just plants now. Against Team oNe, he notched a 1.22 SiegeGG Rating - only second to Maurice "AceeZ" Erkelenz on his team.

Kafe Dostoyevsky was marked by Rogue's defensive aggression. AceeZ's runouts on Valkyrie didn't go unnoticed by fans or analysts, and AceeZ himself said the runouts were prepared and calculated in order to get the first pick and then fall back to site.

"One thing we did see from the earlier stages of the tournament and the brackets is that they had three maps that they really love to ban," said meepeY when asked how his team prepared. "We kinda suspected they were hiding something, and were preparing to bring [Kafe] out."

The victory on both maps wasn't easy. Rogue started off on their back foot both times, on Kafe they began down 3-0 and on Oregon Team oNe won their first two attacking rounds. "As long as we can keep our heads level and just keep going, I think as a team we're always ready to bring the comeback," said LeonGids. 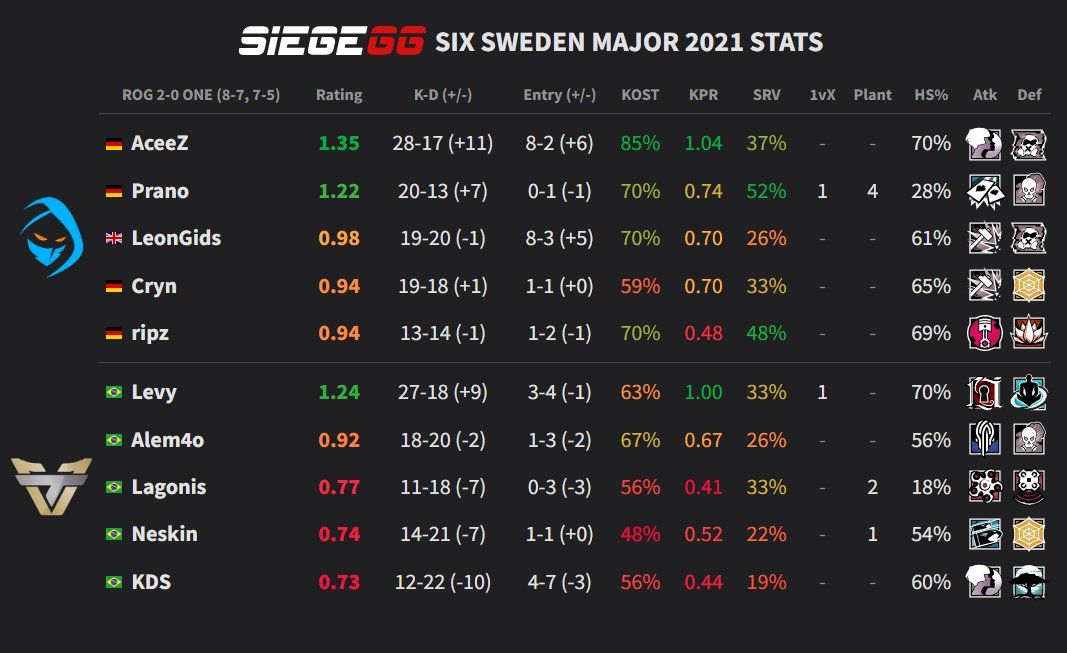 Rogue will move forward to face the victor of the Ninjas in Pyjamas-Spacestation match. Team oNe, the Mexico Major champions, are eliminated.

"When the playoffs arrive, that's when you see the best teams," said Arthur "TchubZ" Martins, Team oNe's head coach, in a separate post match press conference. "...we knew, we prepared, but it wasn't enough. It was a great series, though."

With the loss, Team oNe are just the second team from LATAM to be eliminated from the tournament, and the first one seed to lose their matchup with a two seed.