With the Copa Elite Six Stage 3 groups now over, let’s have a look at the most important takeaways.

Following the conclusion of the Copa Elite Six Stage 3 group stage, FURIA Esports and Team oNe have become the first two LATAM squads confirmed to compete at the Sweden Major.

Diogo “Fntzy” Lima, the man of the moment in Brazil, was the best player of the group stage after recording a SiegeGG rating of 1.55. He was key in his team’s results, especially against Team Liquid and MIBR, where the 18 year-old registered 24 kills across both games.

FURIA Esports completely dominated the group as they defeated their Brazilian neighbours' Team Liquid and MIBR by 7-0 and 7-2 respectively. In fact, the team only struggled against Malvinas Gaming, as the Argentinians were 6-1 ahead at one point in the match. Nevertheless, the Brazilian side reacted just in time and won the following seven rounds.

The statistics clearly show FURIA’s dominance over the rest, as every player in the team averages a SiegeGG rating of above 1.1.

Triple draw in Group B sends Team oNe to Sweden

Throughout Stages 1 and 2, there was never a draw in the final group stage standings. However, Stage 3 is the exception to the rule.

Team oNe, FaZe Clan and Ninjas in Pyjamas earned nine points as their only losses came in games between the three sides -- Team oNe fell to NiP, FaZe to oNe and NiP to FaZe. That meant that the head to head difference would not be enough to separate them.

In this situation, the number of rounds won throughout the group stage had the final say. That meant that oNe, with 26 rounds won, would finish at the top, with FaZe Clan finishing in second (23) and NiP in third (22).

Malvinas shines by the hand of Paraguay’s star blk

Only one player could outshine Fntzy’s group-stage showing. It was not Luccas “Paluh” Molina, 2020’s best player of the year, nor the Mexico Major MVP Juliano “Levy” Andrade. Playing among all these great personalities, it was the 18 year-old Richard “blk” Rodríguez who left the Brazilian fans slack-jawed.

To give you some context, the Paraguayan player signed for Malvinas Gaming at the beginning of the third stage. However, he could only play two games as he was underage until the penultimate match of the split.

His only professional experience before competing at the Copa Elite Six were two South American championship games, against Infamous Gaming and Notorious Gaming.

The Paraguayan wunderkind ended the group stage with a SiegeGG rating of 1.30, four-tenths more than the second-best rated player in Malvinas Gaming. He also registered 53 kills, which put him at the top of the fragging stats, just above Fntzy with 50.

Worst Mexican performance in the history of CES

For the first time, the Mexico sub-region leaves the tournament with no teams among the six best. While Atheris Esports made it through the group stage on the first split, Fenix Esports did so in the second. None of them reached their goal.

Despite beginning with a huge victory over MIBR (7-5), Atheris were beaten by Malvinas Gaming the following day. The Argentinians are Mexico’s terror, as they now have defeated them on four occasions out of a possible five.

Following their loss against the Argentinian side, Atheris could not defeat FURIA Esports and Team Liquid.

Meanwhile, Fenix Esports could not repeat their previous result as the Mexicans lost all of their games, including their match against 9z Team -- the Argentinians’ first win ever in the Copa Elite Six.

Either NiP or Liquid will not be in Sweden, Malvinas could make history

The first quarterfinal game will feature FaZe Clan and Malvinas Gaming. The Argentinians have made it through the group stage for the first time, so this will be the most important game in their lives. 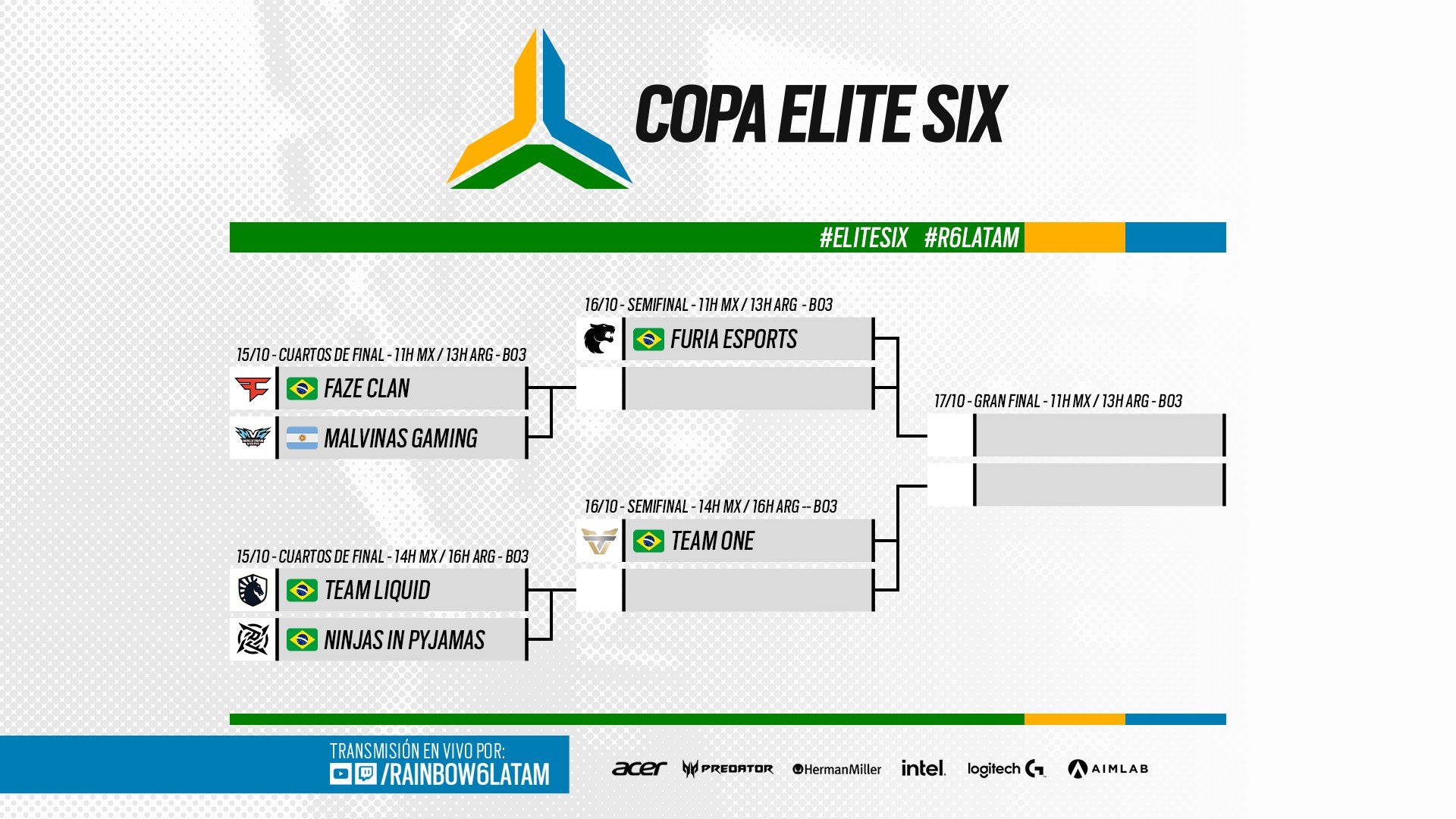 However, Malvinas Gaming have never won against any Brazilian team. The Argentinians have played 12 matches against Brazilian sides, losing 10 in regulation time and two in overtime -- both of them in this week’s Copa Elite Six.

Considering that their opponent will be FaZe Clan, who were undefeated in the BR6 for seven consecutive games, Malvinas Gaming are in a very difficult spot.

It is also worth mentioning that FaZe Clan’s analyst is Cesar “Dark” Adriano, who coached 9z Team during Stage 2 and had to study Malvinas’ game.

The second quarter-final match will be a replay of the SI 2021 Grand Final, as Ninjas in Pyjamas and Team Liquid will play for a spot at the Sweden Major.

Ninjas in Pyjamas have struggled throughout the third split as the team only won three games out of a possible nine. Meanwhile, a rejuvenated Team Liquid finished in second place despite their most recent signings.

With Ninjas in Pyjamas being a Swedish organization, it would be underwhelming that the first international event they miss since 2019 was their home Major.