“The GSA teaches you things that you might use in Europe”: G2's Jonka on his team’s performance in the GSA League

With the GSA League now over, SiegeGG spoke to G2 Esports’ player Jonas “Jonka” Kaczymarzyk to know more about the team’s campaign.

Debuts are always a challenge, but it gets tougher when you make your top-flight debut under G2 Esports.

The player Jonas “Jonka” Kaczymarzyk had to go through this situation. After a third place finish at the UKIN Season 2 and missing out on promotion to the European League, the German player signed with G2 Esports.

To add any more pressure if possible, the announcement came after benching the historic Finnish duo of Juhani “Kantoraketti” Toivonen and Aleksi “UUNO” Työppönen in an attempt to change the team’s dynamic after their disappointing results at the SI 2021.

Jonka’s G2 Esports’ debut came in the GSA League against Ovation Esports, a game that ended in a 7-3 victory. However, the tables turned a week later as G2 were demolished by Rogue (1-7) in what was the organization’s first loss in their GSA campaign. 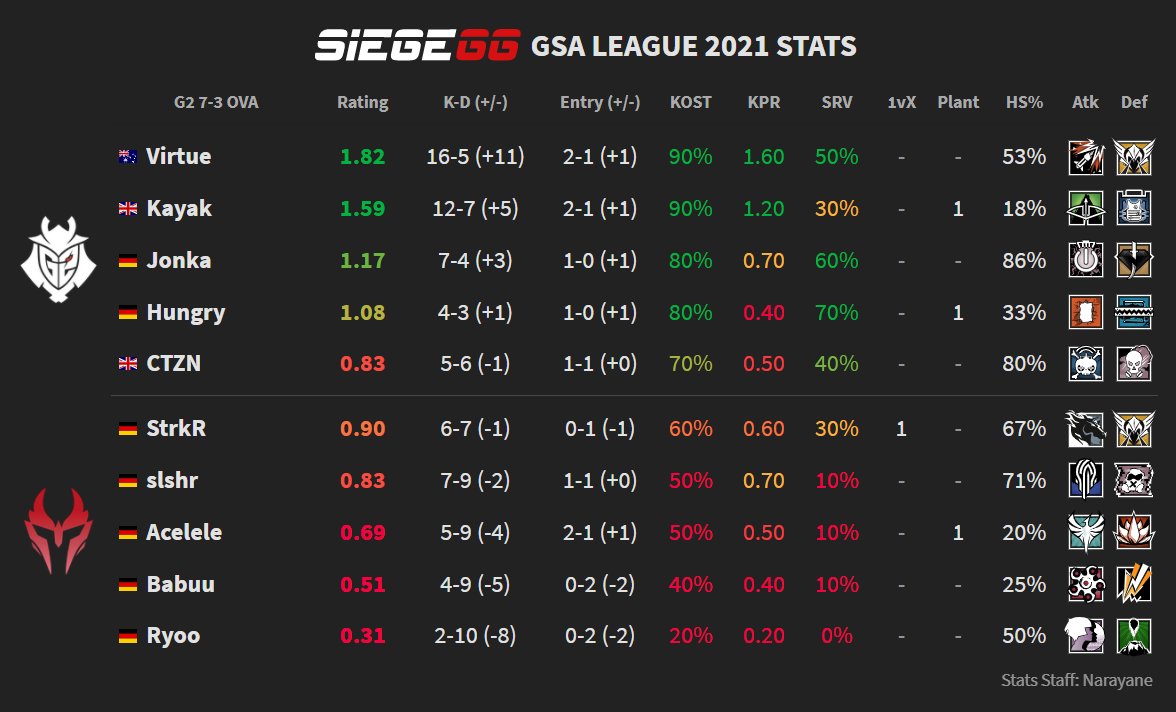 “It was good to have our first official games together in the GSA because you are always nervous then, that takes away most of the nervousness,” said Jonka in an interview with SiegeGG.

In Europe, the roster results were promising. G2 finished in second place of EUL Stage 2, just behind Team Empire.

The first big test came in Mexico, and G2 didn’t exactly stick the landing. After losing twice to both DarkZero Esports and DWG KIA, the European team finished in fourth place of their group.

“It was a good LAN experience, to feel the difference between the offline and the online Siege. There are many situations that you do not experience in an online situation. That was a huge experience for me,” said Jonka.

However, aside from Ben “CTZN” McMillan and Jake “Virtue” Grannan, G2 Esports have very little LAN experience in the roster. Jordan “Kayak” Morley’s first LAN experience was at SI 2021, and despite Lucas “Hungry” Reich having plenty of experience in the game, his last LAN participation at a major event prior to the Mexico Major was at the SI 2019 under PENTA Sports.

Expectations can be a real problem sometimes. When fans think of G2 Esports, they still somewhat think of their legacy: A roster capable of winning the SI not once, but twice. Realistically, fans and viewers are more demanding with G2 than with any other team in the scene.

“G2 has very high expectations that a T2 team doesn’t have. G2’s goals are demanding, always finish inside the Top 4, qualify for any tournament possible and do well in these, that adds pressure, but that comes with the name of G2,” explained Jonka.

After their underwhelming performance in Mexico, G2 Esports went back to their home region to revalidate their championship condition in the GSA. Although G2 were the favorites, their rough ending to the GSA regular phase -- 5 back-to-back losses in the last month of competition -- was not a good omen.

Nevertheless, the German organization absolutely demolished their opposition, as G2 Esports defeated SSP twice (2-0 and 3-0) and GoSkilla once (2-0). 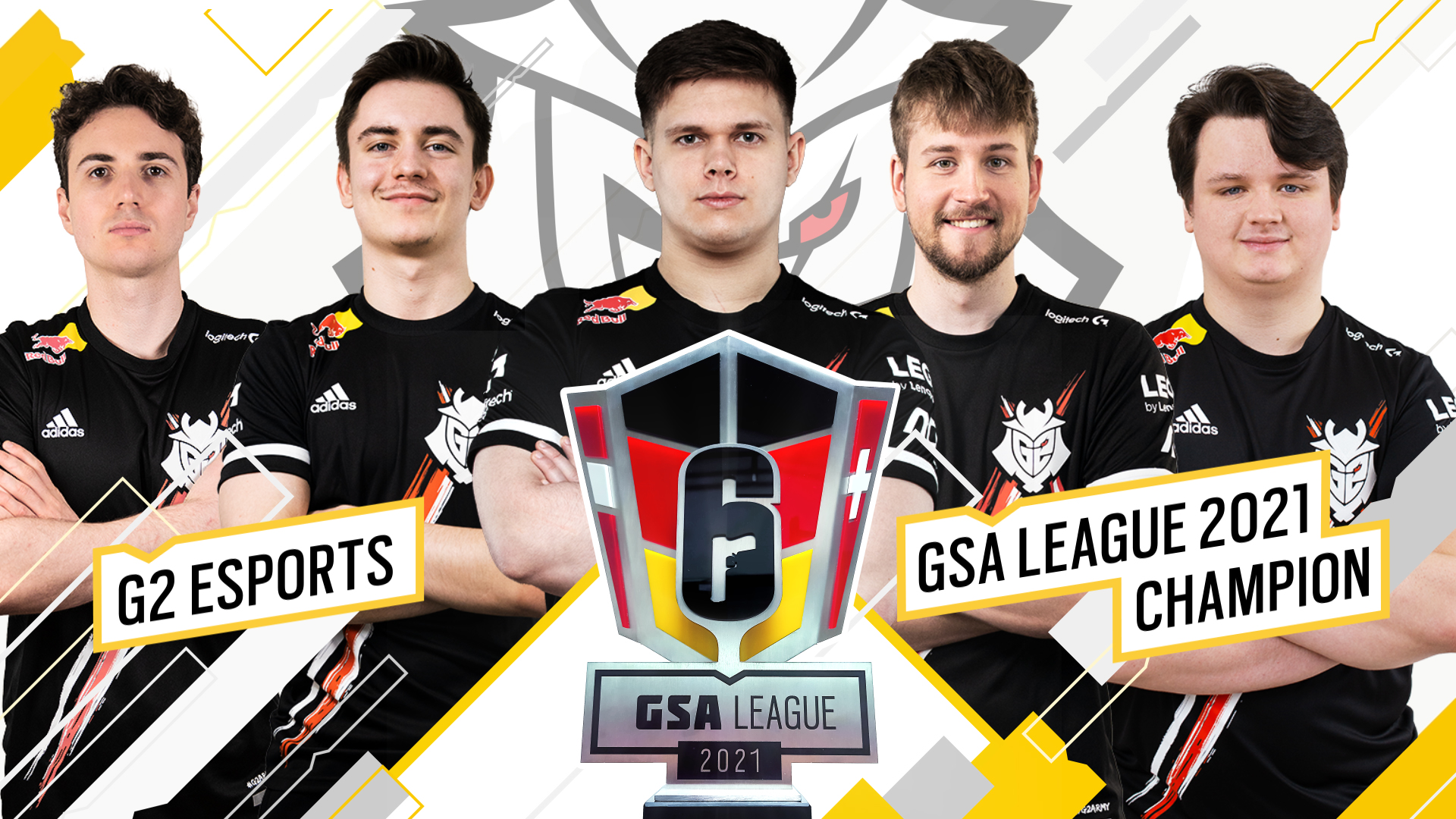 “We were focused on the European League, as long as we hit Top 4 we were happy. That is the reason we lost so many games (...) ending outside the Top 4 would have been a failure. After the Mexico Major we did not have anything to play for, so our focus was on the GSA Finals. We were able to prepare for the games, prepare the maps,” said Jonka.

Just like Rogue and Secret, G2 Esports had priorities. The team did not show their true potential and that could be seen in their playstyle and the role that each player had. The team even used non-meta operators in the GSA games, as “it’s fun to play those operators, especially for the viewers” and even “teaches you things that you might bring out in EUL”.

But their victories at the GSA Finals were not easy by any means. The GSA has shown that the region is full of hidden gems, and many rosters have impressed the three European top-flight rosters in the competition.

Jonka used to play in the UKIN before joining G2, a national competition that has the likes of Natus Vincere, cowana Gaming and MnM Gaming, Jonka’s previous team. The German player admitted that the quality in the league caught him off guard, as he “always thought that UKIN was one of the strongest leagues.”

“Lots of teams have a lot of potential, they have a very aggressive and confident play style. However, I don’t know if they will be capable of maintaining these in the Challenger League. If they do, they will do well,” said Jonka regarding the quality of the teams in the league and the three teams that will represent the region in the upcoming European Challenger League.

With the GSA League now over, the team can exclusively focus on the European League and their objective to qualify for the November Major. Their next match will be crucial, as they will face Cowana Gaming -- a team that has started the season with two 8-7 victories, against both Team Empire and Natus Vincere.