World champion NiP took a tumble in the opening week of Stage 3.

LATAM is back as the Brazilian, Mexican and South American championships kicked off this week. Keep on reading to find out what happened in each region.

Saturday’s most anticipated game in Brazil had been the first one, as Team Liquid had taken on Ninjas in Pyjamas. This was not just a replay of the SI 2021 Grand Final, but it was also the first game under the Liquid colors for both Gabriel “AsK” Santos and Pablo “resetz” Oliveira.

The two paid back the faith put in them in full; the first round of the game saw the rookie AsK get four kills for Liquid. Not only that, the game’s highest rated player was eventually resetz, with a 1.23 SiegeGG Rating.

Liquid was always the dominating side, with both resetz and Luccas “Paluh” Molina completing two vital clutches.

Despite Liquid being 6-3 ahead after round nine, the SI 2021 champions won three back-to-back rounds to force overtime. There, Liquid finally obtained the win after being able to enjoy two attacking rounds, with only four defences won throughout the entire match.

The match was not free of controversy, though, as Ninjas in Pyjamas won the most bizarre round of the game. Despite André “nesk” Oliveira killing NiP’s last member at the very last second in the round, victory still went in favour of NiP.

Elsewhere, MIBR defeated Black Dragons in what could be a crucial result for the final standings. Two outstanding performances by Felipe “FelipoX” de Lucia -- back at full strength after a shoulder injury -- and Tassus “Reduct” Scarinci led MIBR to a win that saw the team breaking into the Top 6 after a problematic Stage 2.

Meanwhile, Black Dragons new signing Guilherme Bassetto had an awful debut, as the youngster finished with a SiegeGG rating of 0.64.

Later on, the Mexico Major winner Team oNe dodged a bullet, as W7M Gaming almost pulled off an upset on Villa. The 10th-placed team in the standings pushed the Team oNe players' backs up against the wall, as W7M was 6-3 ahead after round nine. But after winning five of the following six rounds, it was Team oNe that came out with a narrow win.

W7M’s Diego “Kheyze” Zanello had a great debut despite his team’s loss, with the highest number of kills on his team.

Saturday’s last game was another upset by one of the bottom teams, as Santos e-Sports clinched an overtime win against FaZe Clan. This was a crucial result for the team, as it is now three points clear from the bottom of the standings.

Just like on the day before, Felipe “FelipoX” de Lucia had another outstanding performance -- this time against INTZ. With a SiegeGG rating of 1.60 and a KOST of 82%, the Brazilian led his team to a vital second victory.

Sunday’s surprise came in the following game, as Santos e-Sports beat Ninjas in Pyjamas by 7-5 on Villa. After an impressive attacking half where Santos won four of its six attacks, the SI 2021 champions were put against the wall as there was a moment they were 6-3 behind. After surviving the first two match points, Santos hung on and closed out the game in the last round.

Brazil’s first week of action concluded with two of the best games Siege can provide us; the future — and the present — of the country clashed, as Team oNe faced FURIA Esports, and two of the most capped organizations in the game, Team Liquid and FaZe Clan, collided in the last game of the weekend.

While FURIA Esports beat Team oNe by 7-3, Team Liquid went to overtime again, but fell against FaZe Clan by a 7-8 margin. 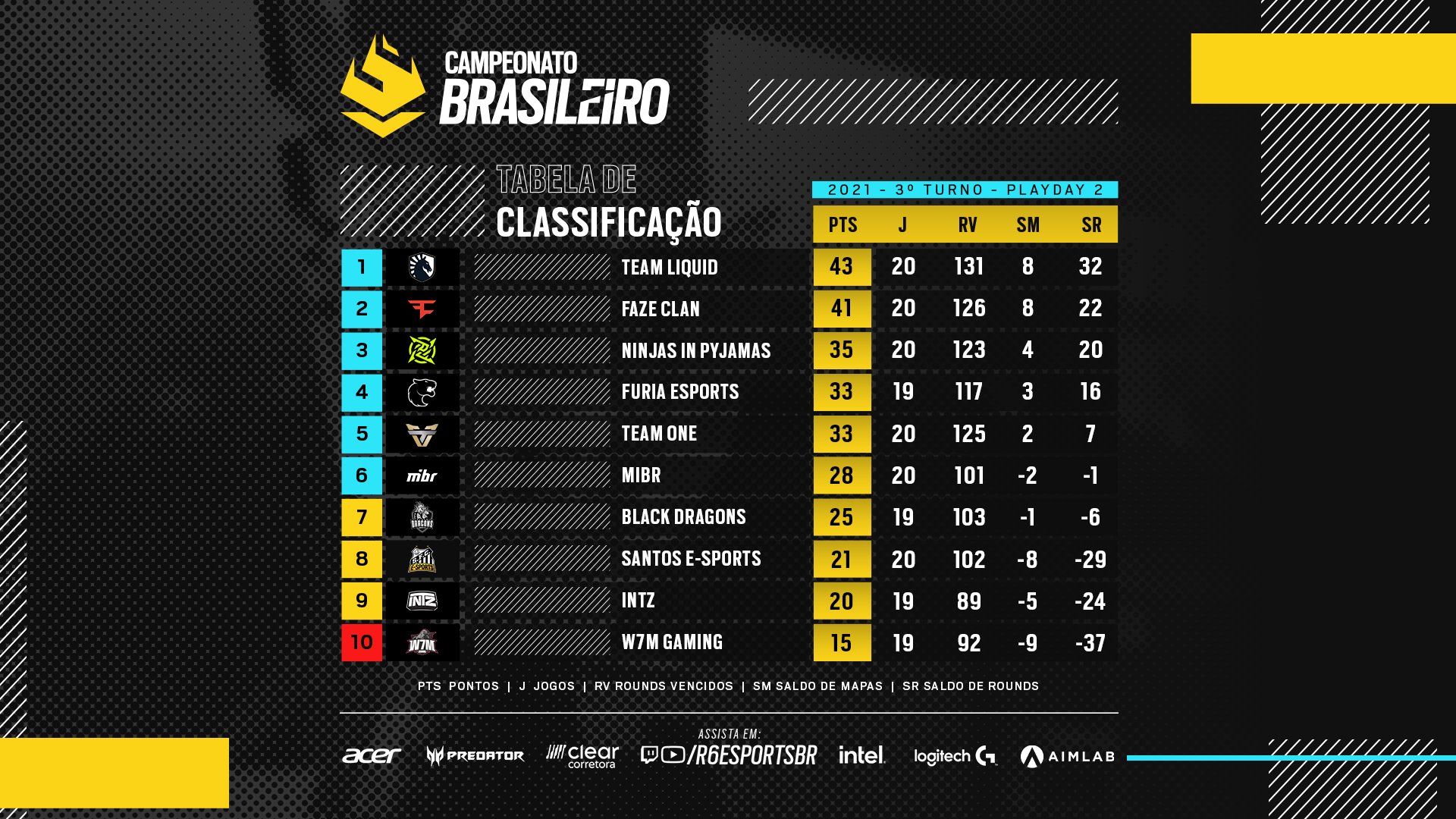 The most anticipated match in the Mexican third stage was the first one of the stage, as the league leader Atheris Esports faced its closest opponent in the standings, Fenix Esports.

Atheris came into the game with a huge question mark after its  horrendous performance at the Copa Elite Six Stage 2. Furthermore, this would be Victor “Bersa” Hugo’s debut in the Mexican competition, whose signing had seen Atheris become a Brazilian-majority roster.

Heading into the game, both teams were not up to the mark, with Fenix in particular failing to close some pivotal rounds. On round five, Fenix had failed to convert a 5v3, and on round seven, the Atheris’ player Luís “Guicho” Gómez had clutched a 1v3 situation.

Although Mexico had scheduled two more games, the competition was forced to postpone the rest of the games due a power cut at the venue while Overknight had been 4-3 up against Kingdom Gaming.

Down in South America, 9z Team kicked things off with a rock-solid victory over Newstar after winning six consecutive attacking rounds on Oregon. This match was followed by two 7-3 results, as Furious Gaming and Coscu Army beat Nocturns Gaming and Infamous Gaming, respectively.

Meanwhile, coming from a flawless stage, Malvinas Gaming was expected to start off the right foot as it faced the last-placed team in the standings; a Leviatán Esports that had a league record of 0-0-2-12. However, predictions are just predictions, and Leviatán surprised all with a 7-5 win over the leaders.

These results make the difference smaller between 9z and Malvinas, as only one point separates both lineups now. Meanwhile, Furious Gaming is still seven points behind the top two. While a Copa Elite Six qualification is still possible, the South American squad is in need of a miracle. 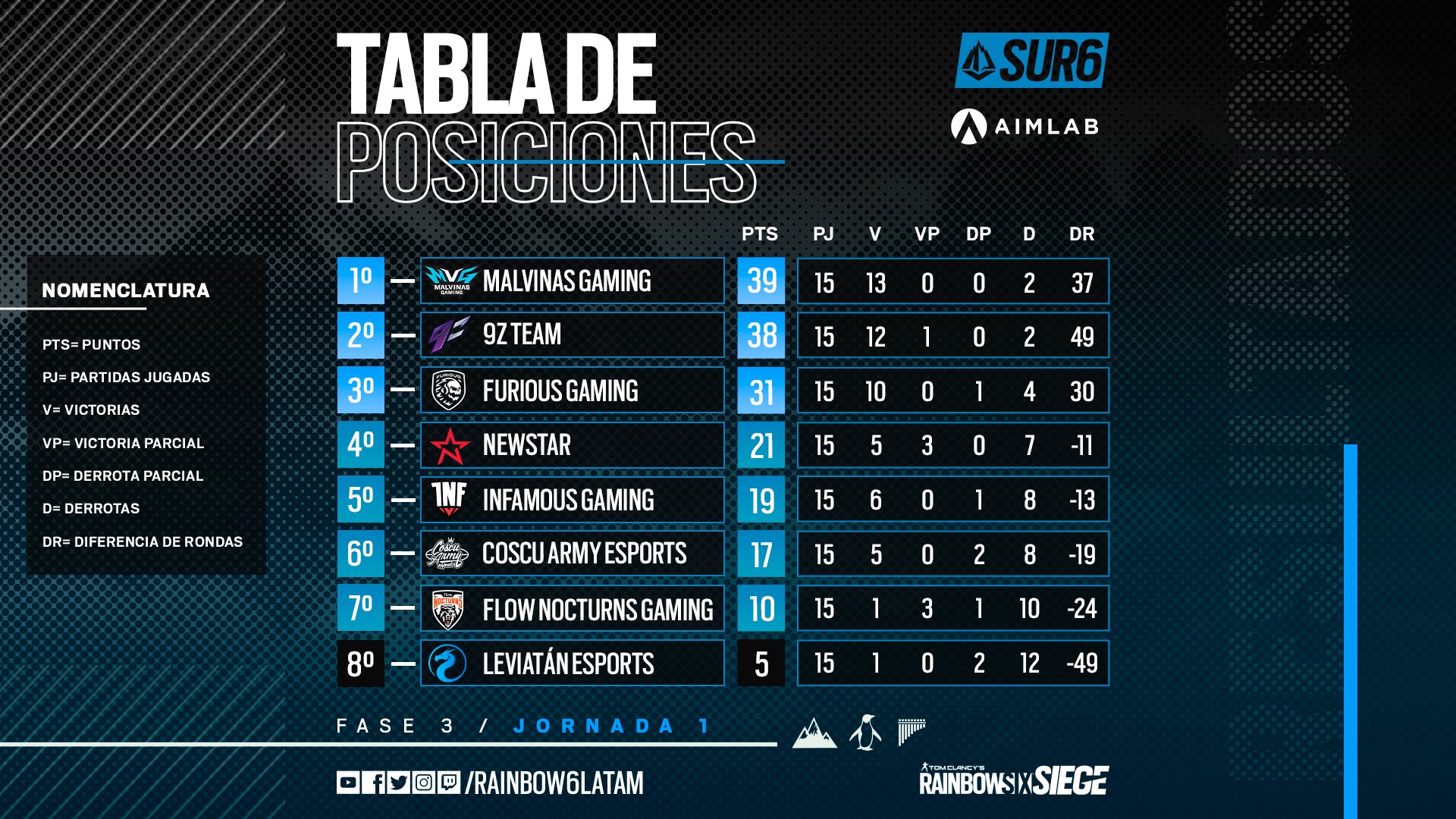