G2 Esports did not lose a single map on course to its second GSA title.

This weekend, the GSA Finals brought the GSA League to a close after five months of play.. Read on to find out what happened in the tournament.

The first day of competition saw the European League lineups of G2 and Rogue take on the  European Challenger League rosters of Sissi State Punks (SSP) and Team GoSkilla.

The GSA League Season 2 champion of G2 Esports took on group stage toppers SSP in the opening match in a tantalising clash somewhat spoiled by the departure of  star player Justin “Zenoxo” Osztafi from SSP. The German organization had announced his departure from the team earlier,  with David “KeTo” Ehrenfierd stepping in.

The match was full of intense moments and clutches, especially on Villa. Round 3 saw Lucas “Hungry” Reich clutching a 1v4 situation, with Jordan “Kayak” Morley helping down two players to turn that into an effective 1v2 for his teammate.

That round was crucial, as G2 Esports headed into its attack with a 5-1 lead. Although SSP took four rounds on the favoured defense, the CL-qualified team could not hang on to force overtime.

Then on Clubhouse, SSP had a great start to the map as the Germans got an initial 2-0 lead. But G2 Esports showed that it had been working well after disappointment in Mexico with four attacking round wins in response.

Although SSP had not been waving white flag just then,an incredible play by Virtue two rounds later gave G2 the control of the match. Two rounds later, the series was all over, as SSP was sent down to the lower bracket.

The upset of the day would eventually come in this game, as the Challenger League lineup of Team GoSkilla took down Rogue with an explosive end to the series.

Much like the previous game, however, Rogue had been playing with a stand-in in place of the recently-retired Lukas “korey” Zwingmann. In his place was Rogue head coach Matthew “meepeY” Sharples, who has more than 3 years of experience as a player, but had last played competitively in 2019..

Clubhouse saw Rogue’s only victory in the seriesm as Leon “LeonGids” Giddens went berserk with 14 kills, beating out GoSkilla’s Leo “M4DMAN” Kukielka with 10 kills across rounds one, five, and six alone.

The tables turned on Oregon, though as Daniel “Exp0” Massierer, who had only gone 0-12 for GoSkilla on map one, was the highest rated player on his team as part of a six-round comeback from 1-5 to win 7-5.

But the explosive nature of the series was far from over, and Rogue was mercilessly rocked on Consulate by a 7-0 margin.Considering that GoSkilla had won the last six rounds on Oregon, it marked a superb 13 consecutive rounds against Rogue in this series. 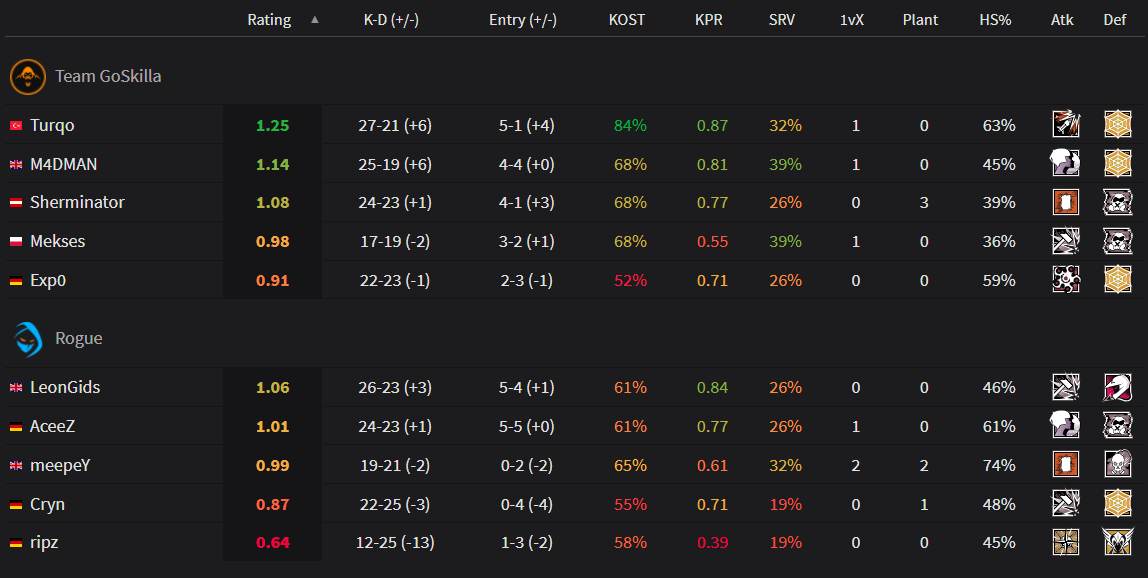 Day 2: Rogue out, SSP hungry for revenge against G2

After a disastrous display on Day 1, a fair few had been expecting redemption for Rogue. But SSP had come into the matchup with a 2-0 head-to-head record.

Initially it seemed that Rogue had learnt well from the previous day, as the EUL team started things off with a confident 7-3 win on Consulate. But deja vu still struck -- albeit on a different map, as Kafe this time was the site of a second 7-0 mauling for Rogue.

SSP successfully kept its momentum alive after winning four attacking rounds on Chalet, which gave the team a huge advantage over Rogue on course to a 3-0 defensive lockout and a 7-2 map win.

Over at the upper bracket, Rogue’s European League contemporary dominated from round one as the duo of Jack “Virtue” Grannan and Ben “CTZN” McMillan finished the series with SiegeGG Ratings of 1.33 and 1.28, respectively.

G2 Esports hung onto the series with a vice grip as the European roster started things off on Chalet by winning the very first five rounds. The team was 6-2 up by round eight, which left Team GoSkilla in a very tough spot. Despite the Challenger League team trying to come back in the following two rounds, three kills by the German player of Jonas “Jonka” Kaczmarzyk were enough to give G2 map one.

G2 did not slow down on Clubhouse as the experienced team won all of its defenses to secure a whopping six map points. After surviving for three rounds, GoSkilla could not prevent G2 from taking map two as well, as 7-3 read the final scoreline.

Fittingly, it was in the match for the second spot in the Grand Final that the two upcoming Challenger League teams of SSP and GoSkilla met.

The game began with a powerful display from GoSkilla, with a 7-1 win on Oregon a fearsome statement against the group stage topper SSP.

Team GoSkilla kept its great momentum alive, winning five back-to-back defences, leaving SSP in a very delicate situation. But after swapping sides, SSP responded very much in kind, with Philip “Daya” Kesper’s 1v2 clutch on round ten keeping his team’s hopes alive to force overtime.In overtime, SSP was very much in control of the situation and won both rounds, dashing GoSkilla’s hope of a quick 2-0.

Chalet was another incredibly close map, but SSP looked stronger on attack this time. It then successfully won three of itssix defences, which would was just enough for a regulation-time victory. Despite Tolga “Turqo” Yilmaz and Maksymilian “Mekses” Borsowski’s great displays throughout the game, and a near 2-0 win, it was GoSkilla that crashed out.

The European League team headed to the Grand Final as the favorite to win the match, especially considering that it had a map advantage.

G2 Esports had no problems in the SSP rematch as Jack “Virtue” Grannan led his team with 32 kills across the two maps played. With a SiegeGG Rating of 1.83 and an outstanding KOST of 95 percent, the Aussie was impeccable and invaluable in the win.

Comparatively, SSP had looked lost while attacking, only winning one attacking round out of a possible nine across both maps.

Overall, the stats were clear in demonstrating how dominant G2 were. Virtue finished with an overall tournament Rating of 1.51, as well as the highest KOST in the competition. The Aussie player was closely followed by Turqo, while meepeY finished as Rogue’s highest rated player in the team despite his usual coaching position.