As the GSA League came to an end on Thursday, here’s all that went down on the final day of play in the group stage.

Heading into the final day of group stage play, much was still at stake in the GSA League 2021. At the top, only the Challenger League candidates of Sissi State Punks (SSP) and GoSkilla had secured a place at the playoff. Meanwhile, the three European League rosters of G2 Esports, Rogue and Team Secret were set to battle for the final two playoff spots.

Additionally, both GC Esport and PENTA were also fighting to avoid the relegation zone towards the bottom of the league table.

After announcing the departure of Vincent “Hife” Finkenwirth, Team Secret had to improvise once again. This meant that its coach, William “Titan” Davie, would play instead. Thankfully for his team, he had had experience, having been the MVP in an 8-7 win against Rogue.

Although his performance was not the best, Secret got the win -- but only just.

The EUL team’s start to the game was amazing, as the Finnish player of Alex “SlebbeN” Nordlund absolutely demolished SSP in the first two rounds, collecting eight kills combined.

Despite Secret being 3-0 ahead, which later became 6-4, SSP managed to force overtime. But Secret managed an 8-7 victory that secured it enough points to draw level with G2 and Rogue at 22 points.

Those numbers secured G2 a playoff spot, as its head-to-head against Secret was superior, while Rogue needed a win in its next match against G2 to beat Secret to the final playoff spot. 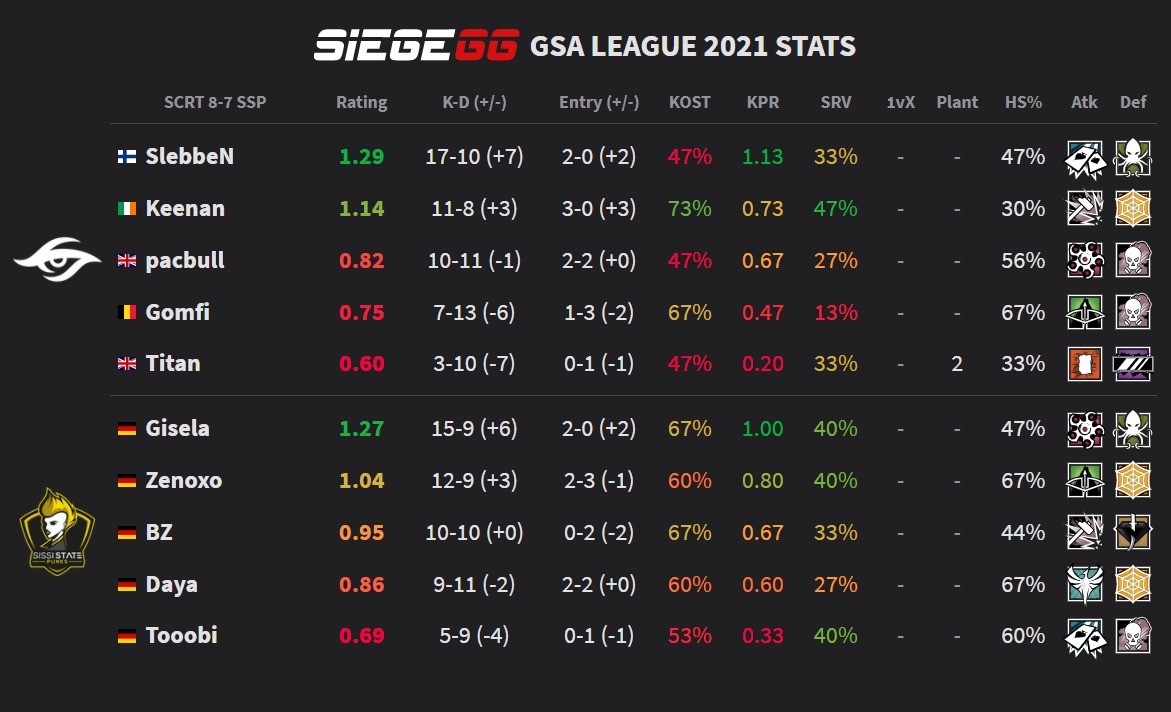 Surprisingly, it turned out to be a rather simple victory for Rogue in what was anticipated as a titanic clash. Lukas “Korey” Zwingmann and Maurice “AceeZ” Erkelenz dominated the game, with Korey securing a 2.06 rating after 15 kills in the nine rounds.

Rogue dictated the pace of the game throughout, securing four rounds on attack and then moving onto the win with a clean defense. As a result, Secret was sent back down to fifth place, while Rogue took its spot in the Top 4 to get into the playoffs. 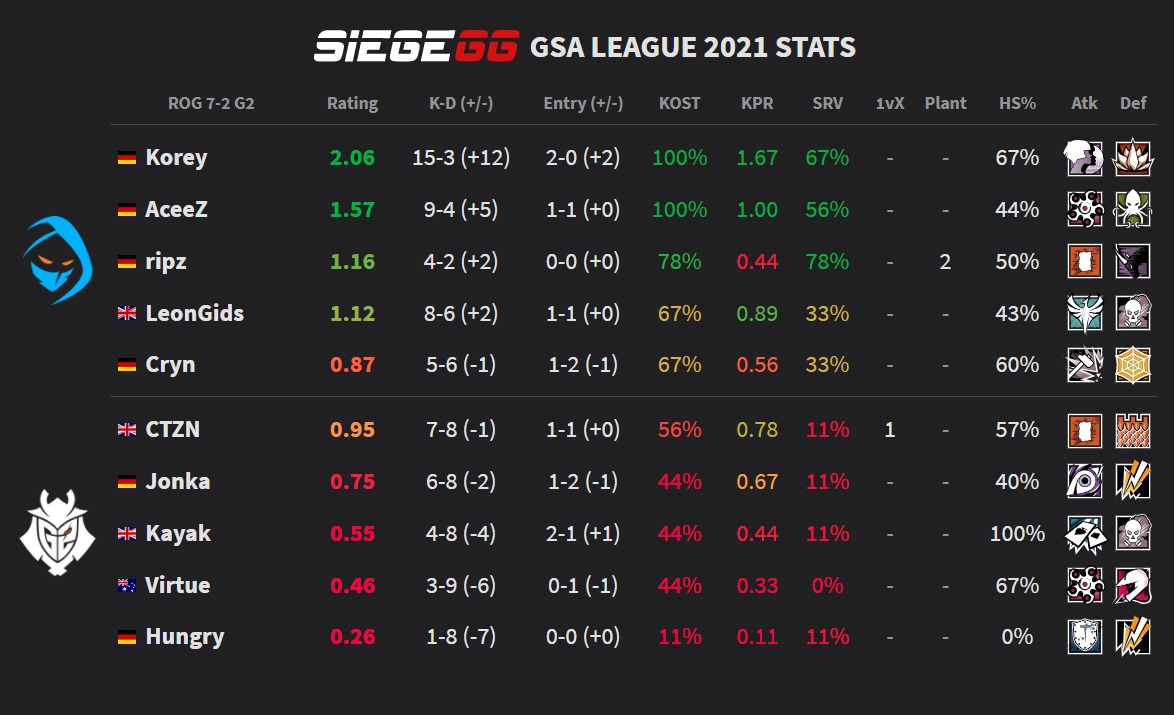 With the Top 4 then decided, the relegation battle took focus instead. Ovation ended up playing the role of spoilsport, with the German squad’s position locked at the very bottom regardless of the result.

PENTA tried its best to secure the one point it needed to move out of the relegation zone for good, but could not overcome an Ovation roster that had taken down G2 Esports last week.

Whitheball, StrkR, and slshr were the standouts from the game, with the latter completing two 1v1 clutches that eventually decided the match. 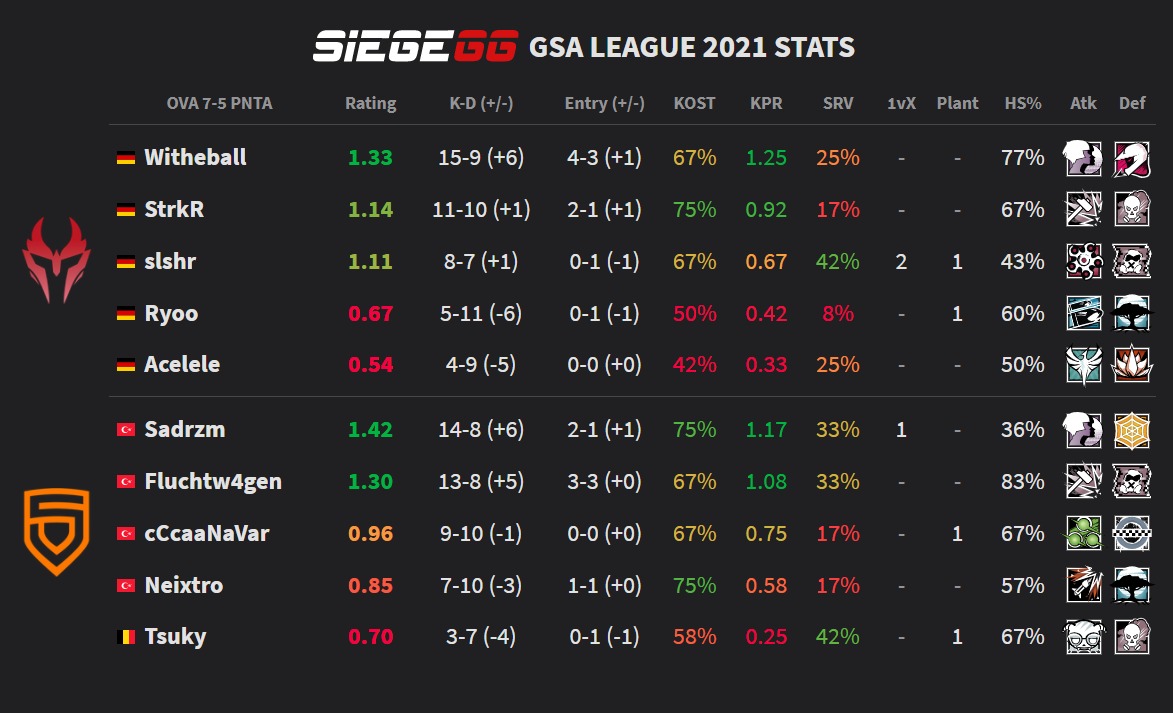 With GC Esport in control of its own destiny, the final match of the group stage no longer had the risk of being a dead-rubber. Its opponent, GoSkilla, had every reason to play conservatively, however, having already qualified for the playoffs and having still been in the race in the Challenger League qualifiers.

GC took a strong 7-2 win on Villa, which was enough to leapfrog PENTA, and ensured it would at least play in the next season of the GSA League, while consigning the Turks to a relegation match at the very least. 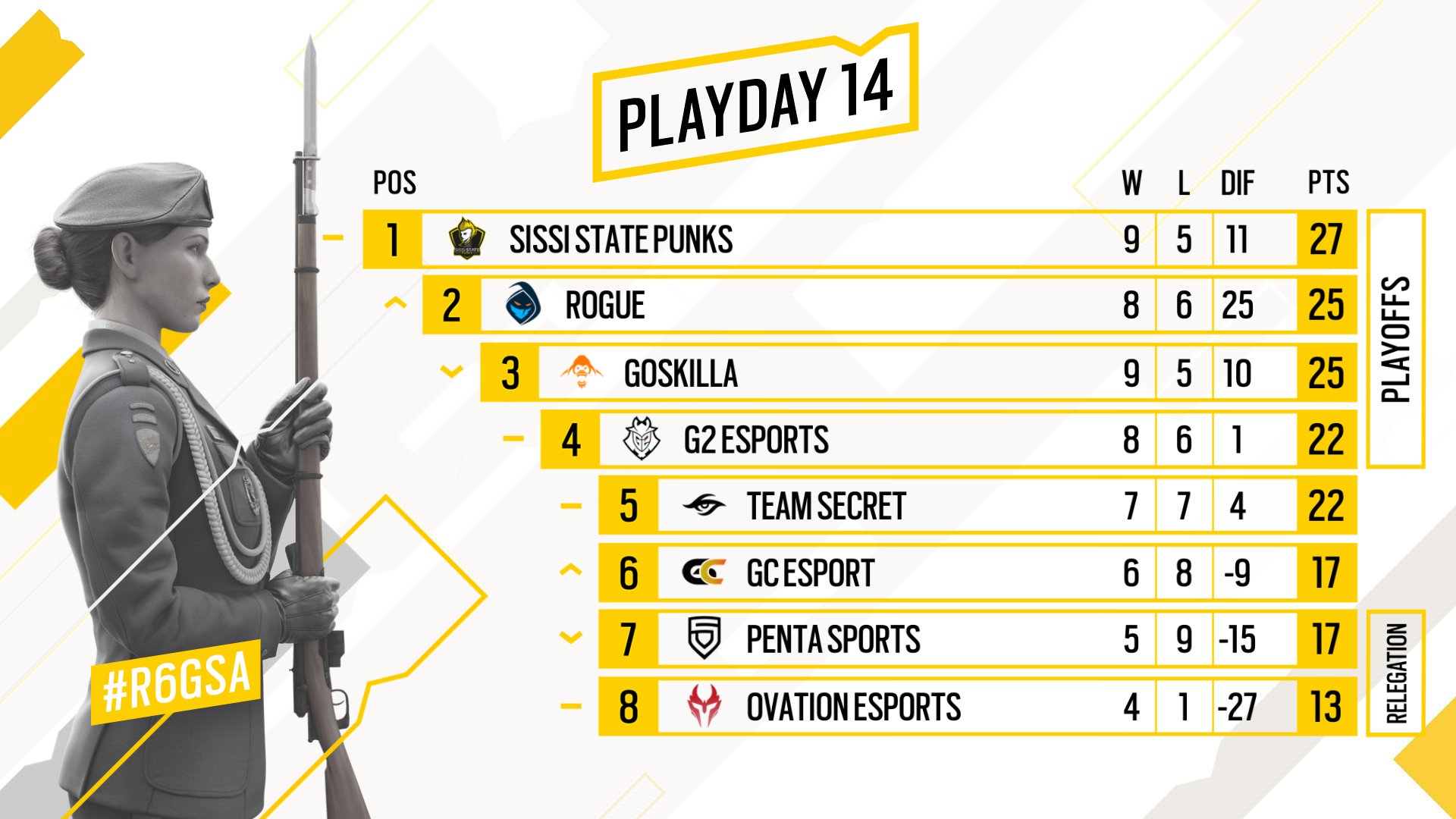 With the group stage now finished, the playoffs are set to be played across the first two weekends in September. Then, SSP will face G2 Esports, while Rogue will play against Team GoSkilla in a double elimination, best-of-three bracket.

The playoffs will be for pride for at least the trio of SSP, Ovation eSport, and GoSkilla, however as the three teams secured their tickets to the Challenger League through the open qualifiers. A fourth German team could also join the party, as GC Esport and the French squad of Totem Esports are tied for seventh place in the Challenger League Open Qualifier standings.