As we enter the second half of the GSA League, keep on reading to not miss any of the action seen in Week 9.

With the final month of the GSA League 2021 group stage underway, fans are excited to see the highest-profile national league in Europe continue to produce top-tier action.

Funnily enough, the results seen this week were the same as from when these eight teams had last faced each other, with the only difference being in the first game as the winning and losing team swapped roles.

This week, the battle to escape the relegation zone raged on as the lead changed hands at the top, with the new leaders looking guaranteed to win the Challenger League slot on offer.

After dropping out from the Top 4 after losing to G2 Esports, Team Secret were in a delicate position. A win against PENTA was thus crucial to keep up with the top half of the table, while the Turks were eager to escape the relegation zone.

Despite Team Secret starting things off right with a 3-1 lead, the PENTA surprised everyone after winning the following three rounds. Tsuky, on Thermite, was the best player on PENTA, as the Belgian successfully planted the defuser on Round 5 and added four kills to his name on Round 6.

But, this momentum did not last for long. Two great coordinated attacks by Secret were followed by two rounds where SlebbeN stole the show, as the Finn got seven kills across the two rounds. 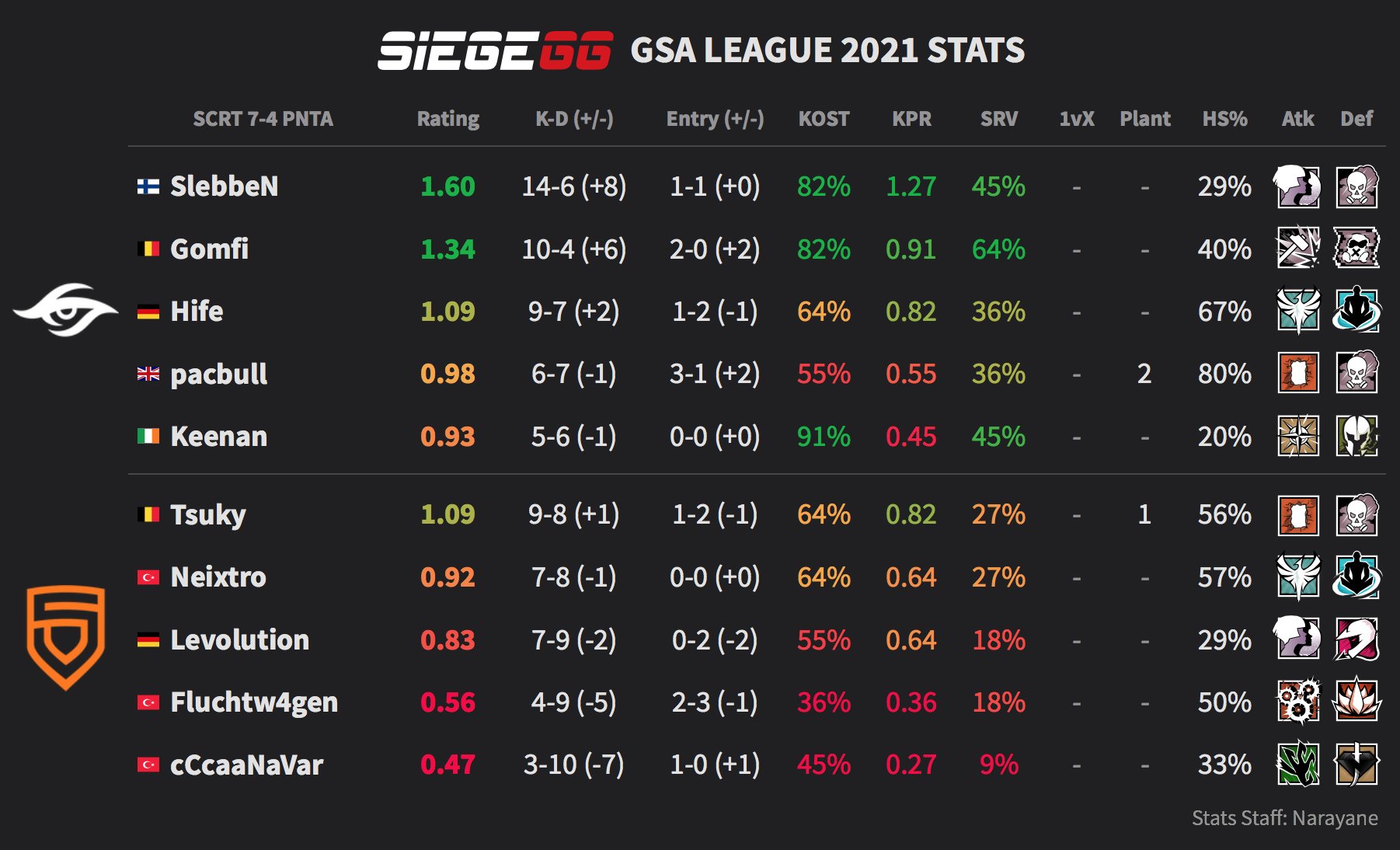 The SSP vs Rogue game was, undoubtedly, the most anticipated match of the day.

The dark horses of this edition of the GSA, the Sissi State Punks, faced the European League side of Rogue, a roster that is currently on the verge of losing its Top 4 status.

A win for Rogue would have see them closer to the Top 2, while another SSP upset would momentarily put the team in first place.

The game was incredible and full of highly skilled individual performances. SSP had a very good first half, as the teams swapped sides with the German roster holding a 5-1 advantage. Zenoxo was the star of the show, as he got an ace on Round 5 and a quad-kill the next.

However, the course of the game quickly changed as Rogue won three consecutive rounds on defence.

It was when everyone thought that Rogue had a chance to make the comeback happen when the SSP secured the match-point and then the win in the final round of regulation time.

Zenoxo, with 18 kills, was the star of the show when the team needed him the most. Meanwhile, LeonGids and Cryn were the leaders on Rogue, with the German currently the best player for his team in the GSA League. 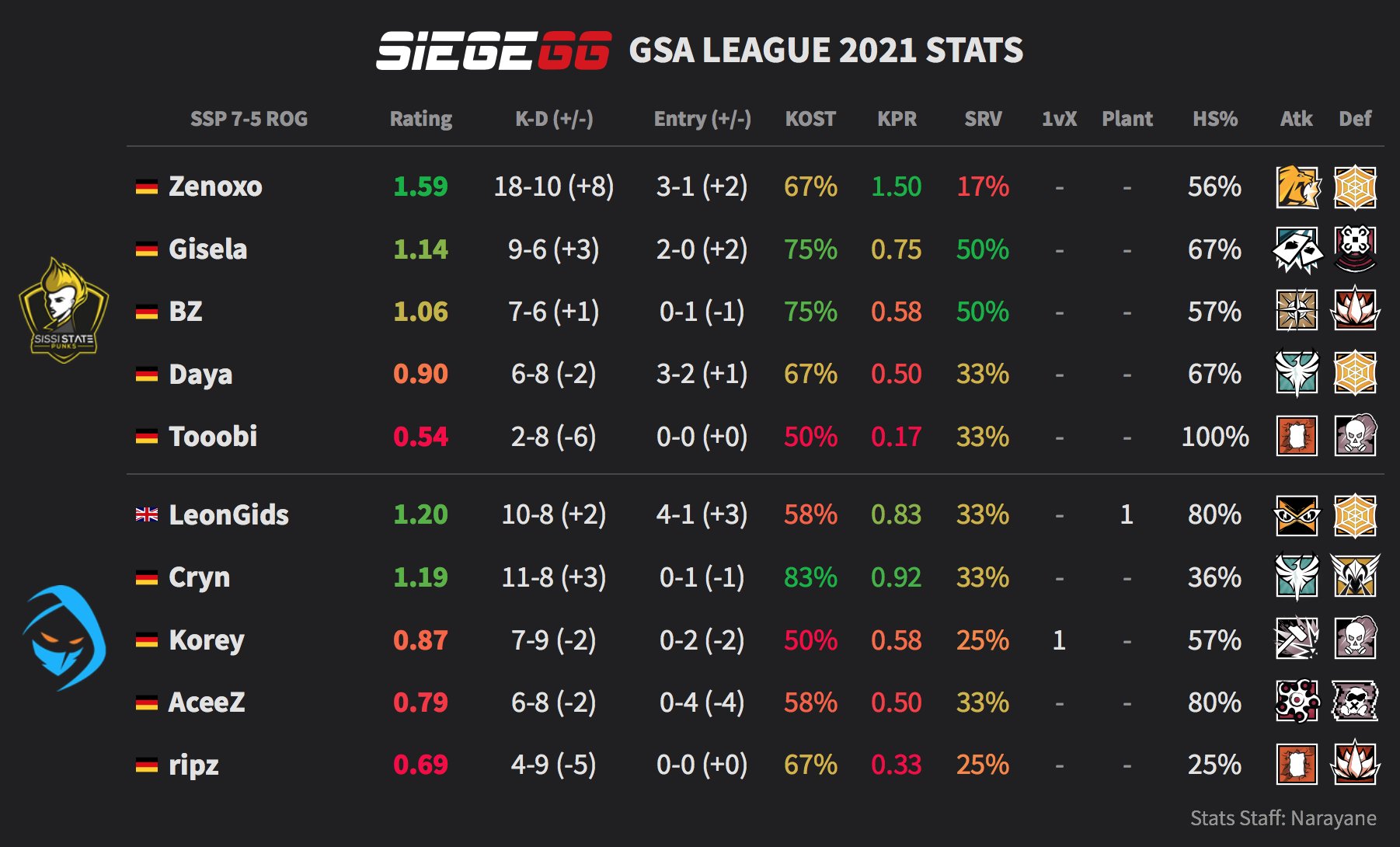 The third game of the day was a repeat of the second day's matchup, where G2 had to recover to force GC Esport into overtime on Villa, with the game finishing in favour of G2 thanks to a clutch by Virtue on Round 15.

But the Day 9 game was even crazier. GC Esport surprised everyone by winning five of the first six rounds, which included a Koji 1v2 clutch in the first round and two successive quad-kills by him and Paiin0.

Despite G2 winning their first two defences, GC were on match point at 6-3. However, the far more experienced squad successfully forced overtime, as Jonka and CTZN stepped up just in time to guarantee at least one point for their team.

GC then secured match point again, as Sushi planted the defuser at the last second and completed a 1v2 clutch, but CTZN stepped up with a 1v3 clutch in response and then combined with Kayak for four kills in the last round.

CTZN was the star of the show for G2 Esports with his 19 kills, while GC Esport's progress was clear despite the loss. 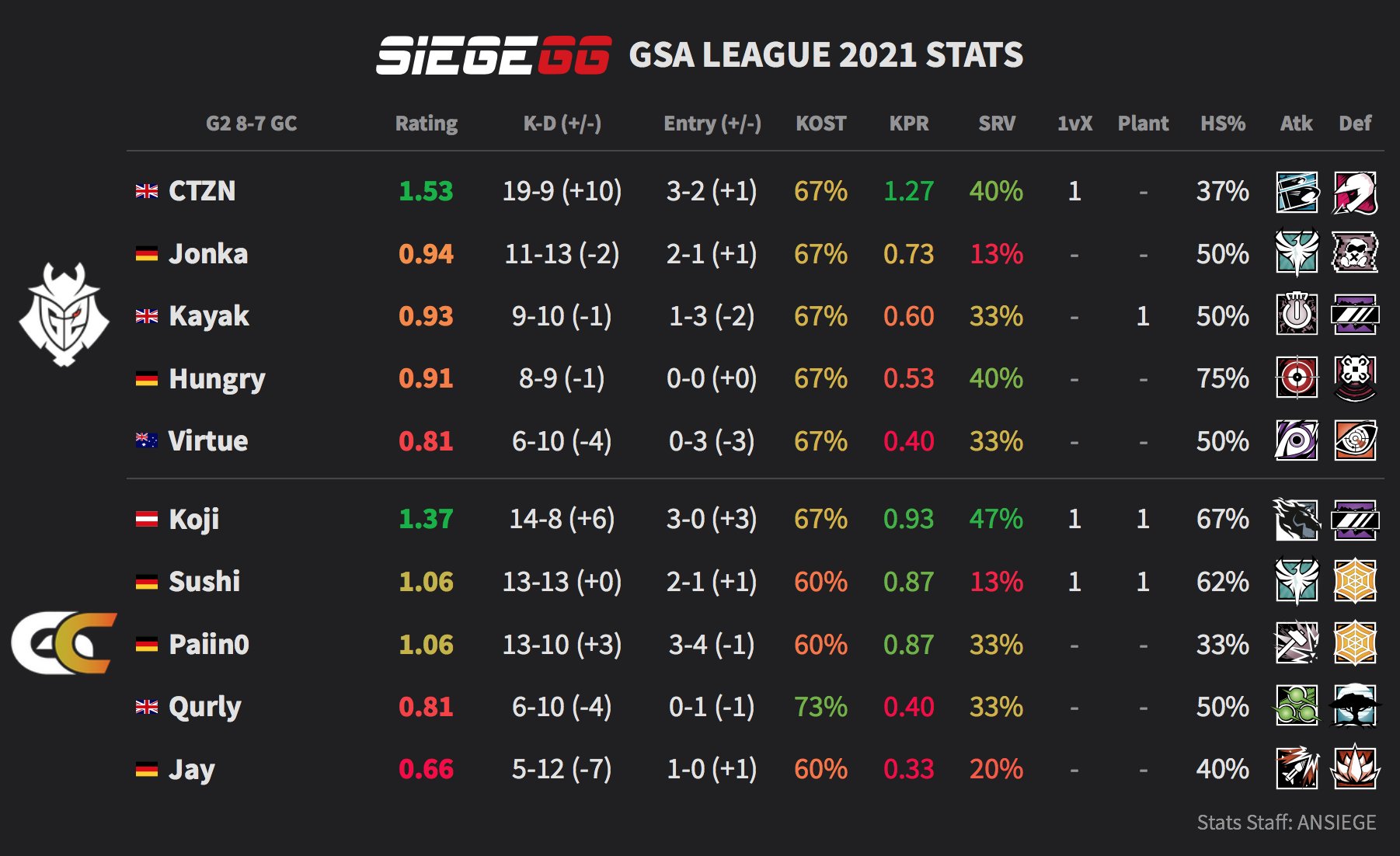 To finish the day, GoSkilla faced Ovation eSports in a very important game for both teams. While GoSkilla needed a win to keep themselves inside the Top 4, Ovation were looking to get out of the relegation zone.

The match began with the announcement of Solotov not being able to play, with Turqo stepping up to much success.

A very strong first half by GoSkilla saw them take an initial 5-1 lead, which soon after became 6-1 after the first defensive half.

Ovation's German duo of StrkR and Ryoo kept their team alive, though, with the latter recording an ace in the ninth round. However, a triple-kill by Mekses in Round 11 cut the comeback train short, giving GoSkilla an important win. 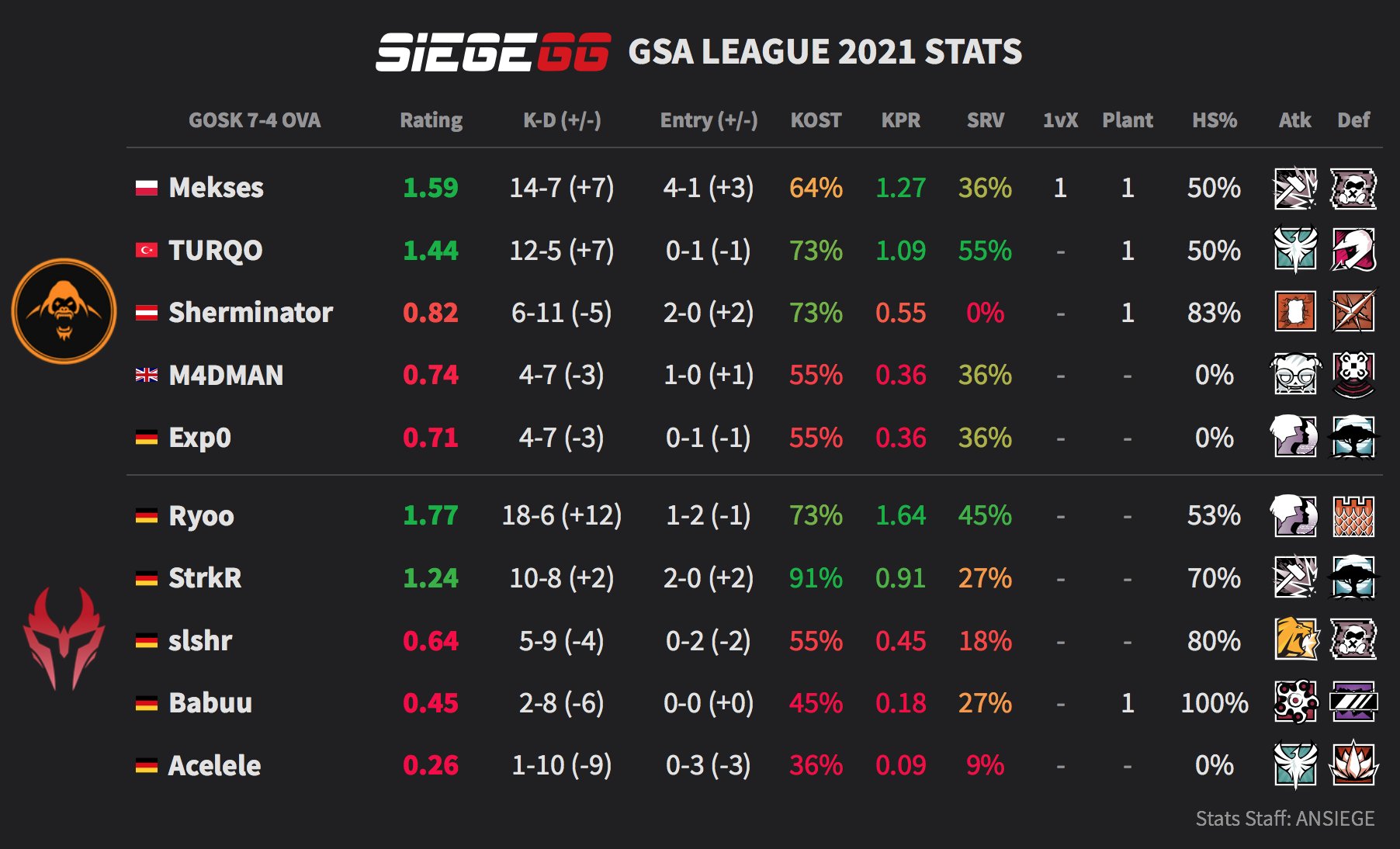 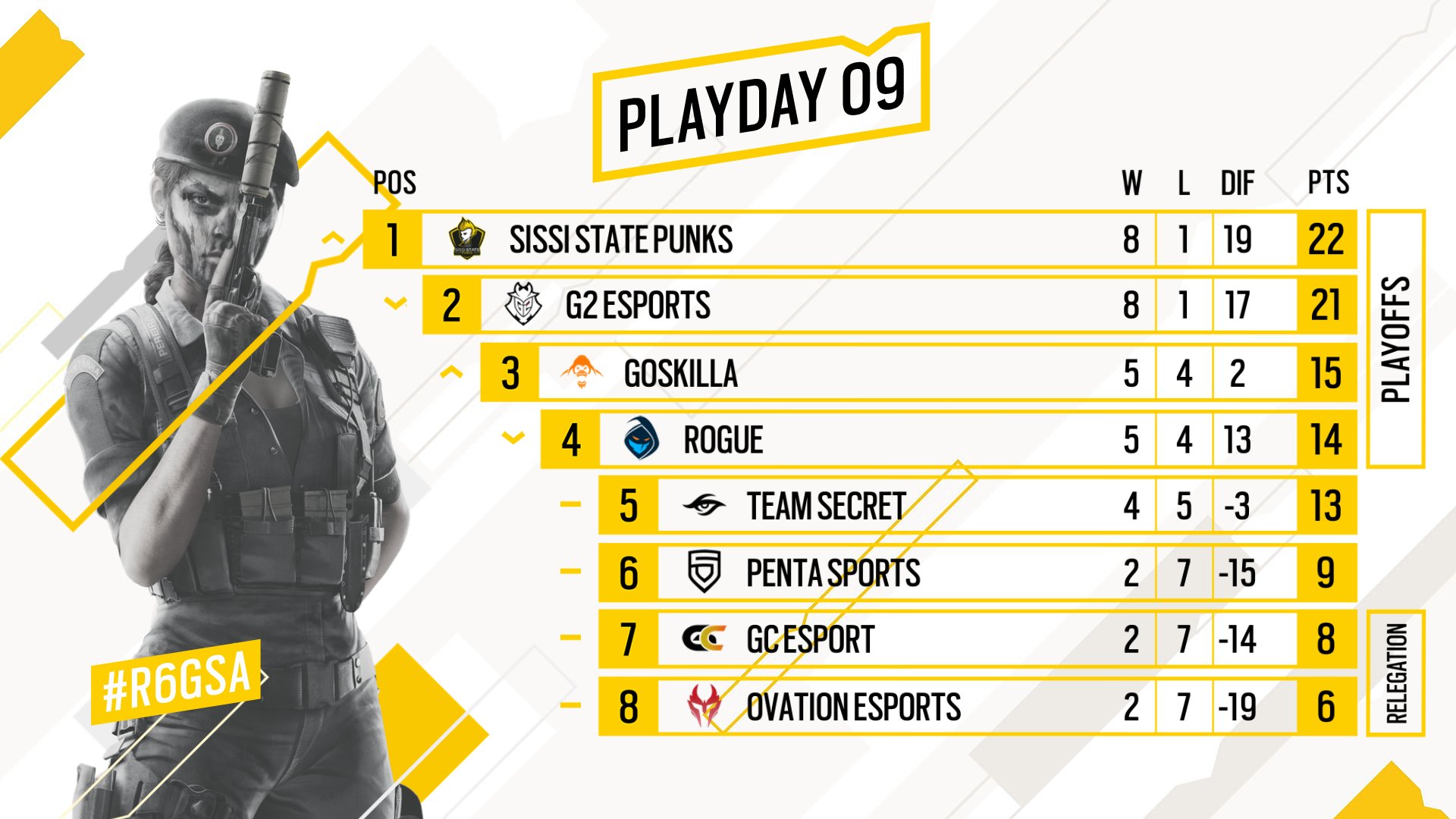 All of these results have shaken the table, especially in the Top 4.

G2’s overtime win and Rogue’s loss means that SSP are the current leaders. Meanwhile, GoSkilla finds itself in third, which means that Secret falls to fifth place, and GC Esport has caught PENTA after scoring seven points in the last three play days.

This week, we will see SSP looking to keep their lead as they face GoSkilla in what could be the decider in the race to qualify for the next Challenger League.

Next, will be the ever-nostalgic matchup between PENTA and G2 Esports, with only the G2 coach remaining from the title-winning PENTA team.

The current two bottom teams, GC Esport and Ovation eSports, will then round things out against Team Secret and Rogue, respectively, in what will be a tough ask for the former two.