As we enter the second half of the GSA League, keep on reading to find out what happened in the seventh week of competition.

With Stage 2 of the European League kicking off the day after, this past week in the GSA was a must watch for every Siege fan.

The brand new G2 Esports roster faced a stern test in the form of Rogue, while Team Secret played against Sissi State Punks, who are seen as the dark horses of the league.

Keep on reading to find out just what made this seventh day just full of upsets.

The Germans of SSP kicked things off right with a win over Team Secret.

The European League side did take control of the game at a point, winning three attacking rounds on Clubhouse, thanks in part to their new two signings of Keenan and pacbull.

Nevertheless, SSP equalised the score before swapping sides, mainly thanks to Tooobi and Gisela, with the latter completing a clutch in Round 4.

It was then Secret’s turn to impress, as the favourites won Round 7 thanks to a 1v3 clutch from Keenan. The Irishman managed to keep his cool amidst frenetic play in Garage, restoring his team’s lead.

However, everything changed from there. SSP’s attacks were rock solid and Secret did not know what to do in order to stop them. Their dominance was so clear that they won four of their last five attacks, which gave them a deserved 7-5 win and put them level on points with league leaders G2 Esports. 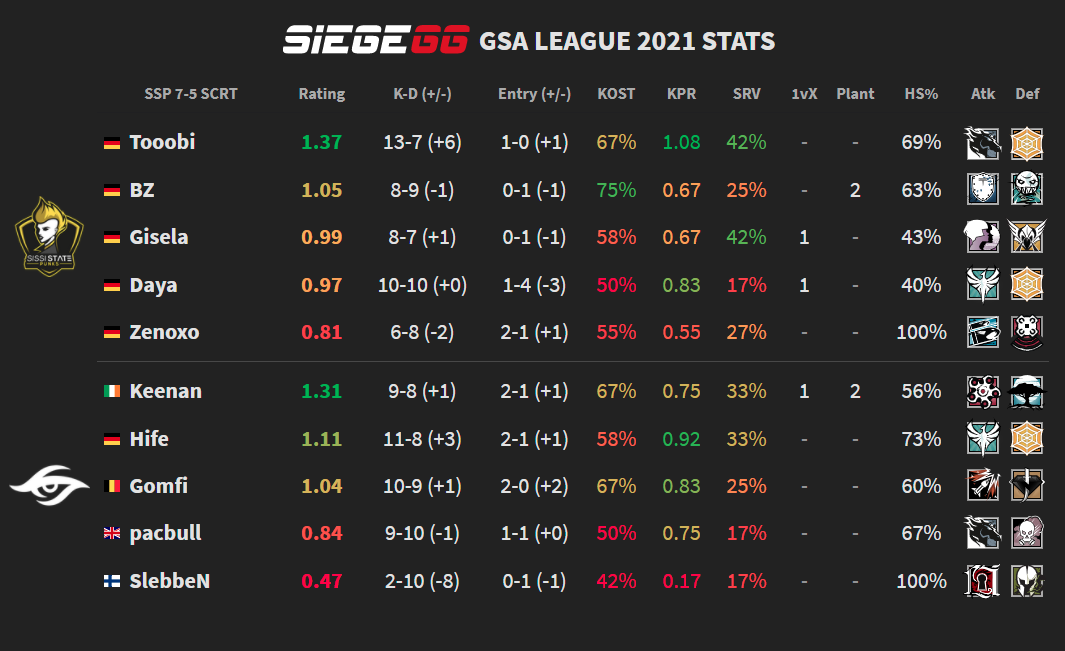 The most anticipated game of the week in the GSA had been labelled as the most difficult game to predict, but only one of the teams actually seemed to show up.

LeonGids and Cryn led the demolition as Rogue dominated the first three rounds, with LeonGids also clutching a 1v3 in Round 4 to extended his team’s lead.

Kayak looked like the only G2 Esports player who could cope with Rogue’s pressure, as a quad-kill by the British player gave his team their first and eventually last round of the game. Although he completed another triple-kill in the next round, LeonGids and Cryn were unstoppable and secured the last three rounds for Rogue.

As such, G2’s unbeaten run in this season’s GSA finally came to an end, but it will be far from the team's main concern as it leads the table with 16 points. 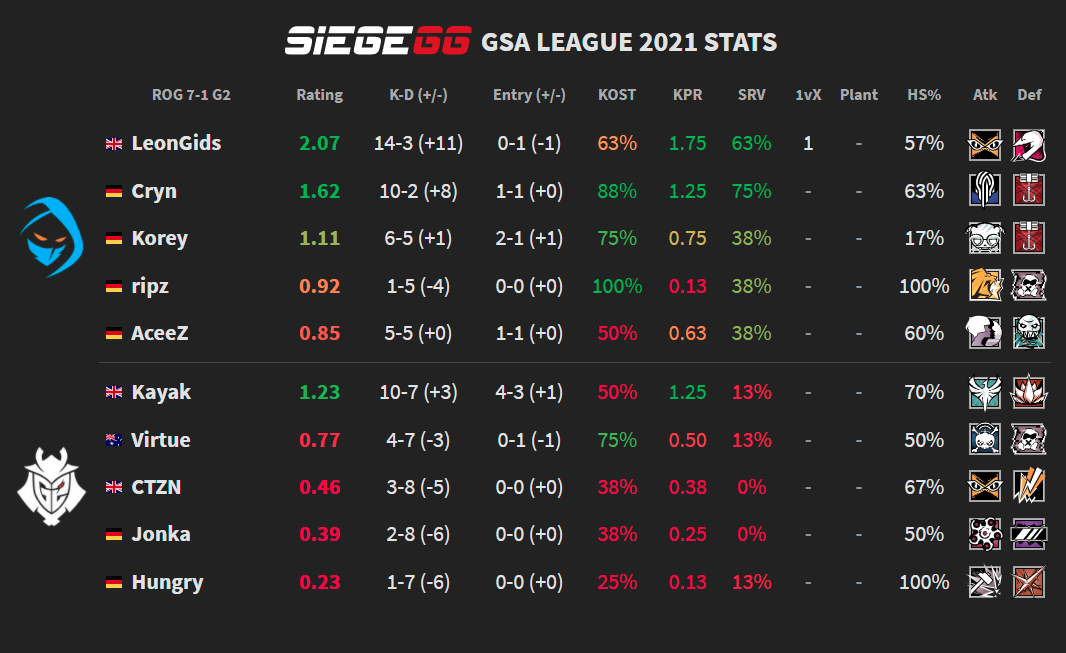 The first upset of the day. What looked like another day in the GSA League for PENTA ended as an absolute nightmare in their race to secure a place in the next Challenger League.

Against all odds, Ovation dominated the Turkish-majority PENTA with a 7-2 win on Chalet. The Germans finished the first half with four wins on attack and then won every round on defence, which quickly secured them the win.

All of these rounds also came in comfortable fashion and the stats say just as much. Every Ovation player secured positive ratings, with three of them finishing rated more higher than 1.4. 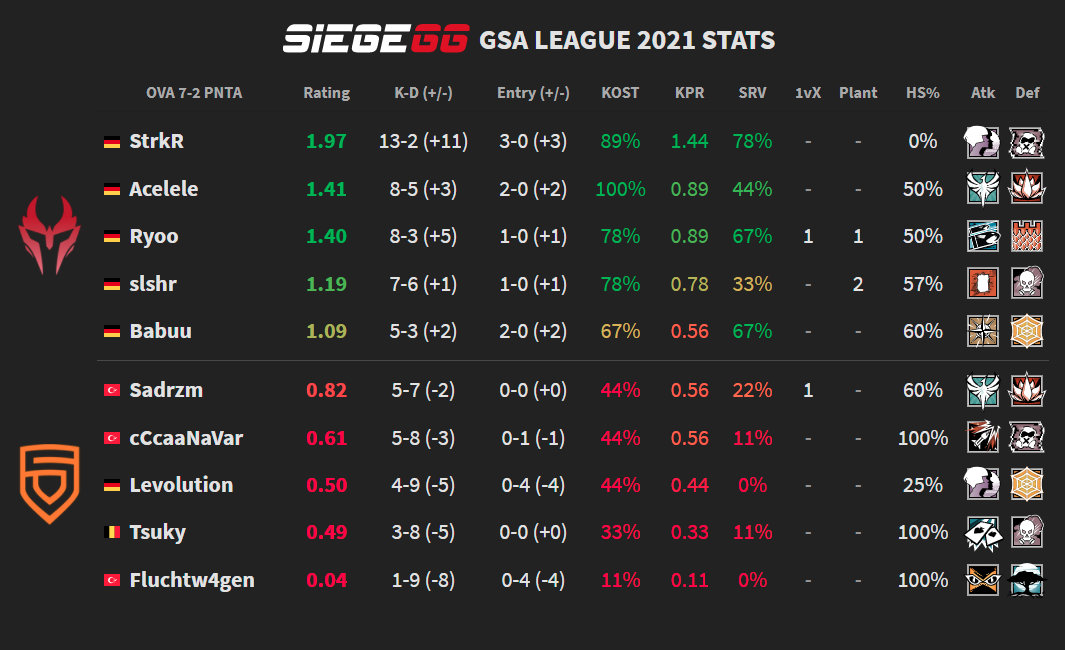 If that was not enough, another upset was in the making.

GC Esport need a win to not be left behind Ovation in the race to avoid the relegation zone, while Team GoSkilla needed the three points to keep up the pressure on SSP.

But GC Esports were the better team on that day. The Germans secured five of their six defences in Oregon and, despite GoSkilla winning their initial two defensive rounds after swapping sides, GC did not give their rivals any respite.

This was the perfect week for SSP, as their immediate rivals, PENTA and GoSkilla, suffered two unexpected losses, while they themselves secured a win against one of the three European League giants. 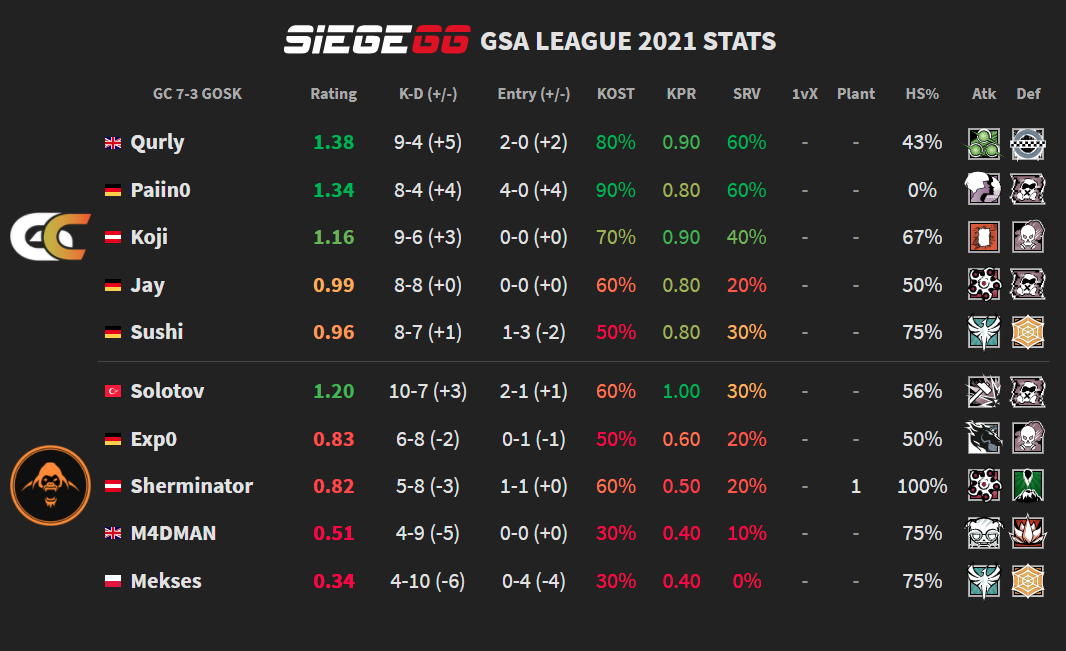 Overall, it was a splendid day of Siege full of upsets and fantastic plays that put the GSA in the top of the European National leagues.

With the first leg finished, it is time to start all over again. Team GoSkilla will face Rogue, while G2 Esports will face Team Secret.

Meanwhile, SSP will look to extend their lead in the race for the Challenger League against Ovation. The day will conclude with a game between PENTA and GC Esport.