We look at how the newest Ash nerf has affected her pick rate across all the top-flight leagues in Stage 2.

Likely the most well-known and played operator in Siege, Eliza "Ash" Cohen has seemingly been the target of Ubisoft's balancing team for many years now due to her ridiculously high presence in games at every level, including competitively. 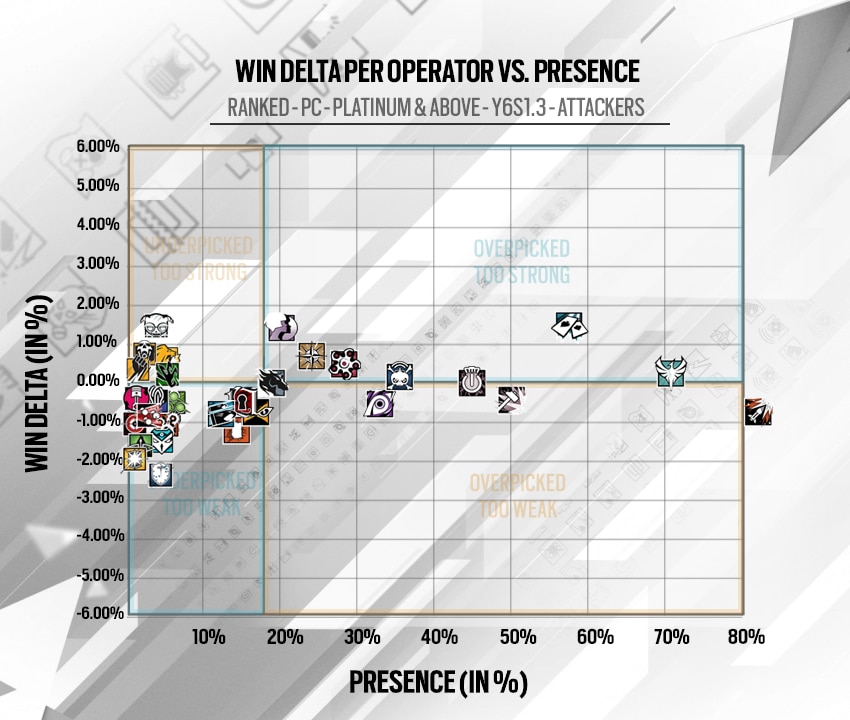 Now, following her most recent nerf with the launch of North Star, it seems as the developers have finally achieved their goal. At least in the pro-tier leagues, her pick-rate has dropped by three-quarters, making her a somewhat rare sight in the attacking lineup.

Let's take a look at what's changed, how it's affecting the operator selections, and what alternative is being brought in all four regions.

What Were the Nerfs?

For those unaware, as of the start of this season, the number of Ash Breaching Rounds were reduced to two (down from three), reversing a change that took place at the end of Year 5 to combat the 20-second meta.

The original intention for this was to balance out the utility meta and increase the pace of the game in the wake of rebalances to projectiles in attack and catchers in defense.

Now, with new denial tools like the GONNE-6 and the brand new rework to Melusi's Banshee that reduces the need to burn a Breaching Round to reliably eliminate it, we feel that this change is no longer necessary and by reverting it, it will make other operators more appealing.

This nerf was a big deal; suddenly operators such as Zofia and Iana brought much better utility and had more usable guns. This has led entry-fraggers, in particular, to move off of Ash and onto the alternatives as they're simply more reliable.

Firstly, while only one week has elapsed in Stage 2, this still adds to 29 maps and over a hundred rounds played in just the five main leagues which will be looked at -- NA League, EU League, APAC North, APAC South, and the BR6.

This is still a small sample size, but big enough to get a broad enough first-look at the change.

Secondly, we are excluding every round in which Ash was banned from the pick-rate count, as players didn't choose to leave her out of their lineup.

With that in mind here are the total number and percentage of rounds played with Ash in each league during Stage 1 and the first week of Stage 2:

All four regions have dropped, however with Ash being played just one-third as much as the first stage.

Who's Being Picked Instead?

Obviously, if no one's picking Ash then who's getting picked?

To answer this I've looked at it two ways. Firstly, what operators are the old Ash-mains now playing on? And secondly, which operators have seen an increase in pick rates this stage?

To look at this, I've taken every single player who played Ash as their primary attacker during Stage 1 and compared it to what they're playing now: 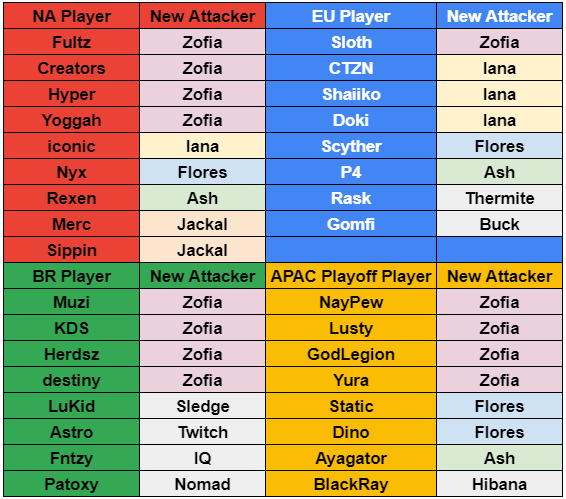 While this doesn't take into account change in roles, specific strategies, or the map picked, 40% of all Stage 1 Ash-mains (13/33) are now, unsurprisingly, on Zofia.

Zofia brings with her the two breaching rounds that Ash has, as well as a better gun and a lot more secondary utility.

Both of these operators are excellent utility clearers with solid weapons, making them the obvious replacements.

Next, let's look at exactly how much the pick rates of various Ash alternatives have changed across all the leagues.

As seen above, the term "Ash-alternative" can mean a lot depending on different use cases, so I've simply looked at Zofia, Iana, and Flores.

This is probably the factor that's going to be most skewed by the low sample size, but it shows where each region is putting its faith.

The table below shows by how much the pick rate percentage has changed from Stage 1 to 2 for Ash, Zofia, and Iana, as well as Flores' current Stage 2 pick rate:

Let's break some of these numbers down bit by bit.

The obvious thing that pops out from these numbers is just how well Iana has fared.

While previously there was no real need for a third fragging operator after Ash and Zofia, now she's taken up the number two spot leading to massive increases in the pick rate with the BR6, in particular, jumping from 29% to 62.1% between Stages.

...While She Falls in NA

Perhaps more peculiar than this is that Iana has seen a fall in pick rates in NA. This is largely because the three Iana mains from Stage 1 -- VertcL, Beaulo, and njr -- have moved off of that role and onto Sledge, Flores, and Hibana respectively.

While Beaulo has simply moved to Flores for his ability to utility clear, the OxG change has been caused by Yoggah moving from Ash to Zofia.

Meanwhile, on DZ, Panbazou has joined as a new Ash player, pushing Hyper from Ash to Zofia also. These two new Zofia players largely eliminate the need for an Iana, leading to the change in operator pick.

While Zofia has seen a modest rise in NA, BR, and APAC, she has seen her pick rate fall in Europe.

Firstly, this is primarily due to the low sample size with just four maps played, but when considering the Ash nerf, all four regions have lower Zofia changes than expected.

This is likely due to the fact that teams already had a Zofia-main, meaning that even if the Ash player moved to Zofia, there's no net change in the number of rounds with Zofia -- just a change in who's playing her.

So across EU, NA, and BR, Flores' pick rate has been about 30%, with Brazil banning him a lot, while APAC has adopted him much more as he appears in half of all rounds he's available in the region -- 26/45 in North and 6/10 in South.

Once again, I looked at the Stage 2 Flores-mains and what they played in Stage 1:

In total, 8/12 used to play Ash or an Ash-alternative of Zofia or Iana. This shows that other than being a very strong operator in his own right, Flores also entered competitive play at just the right time to boost him into the limelight, as Ash players looked for a new operator to play.

So who is the new Queen of attackers? While Sledge and Flores have also seen notable bumps up, it's without a doubt Zofia or Iana, with Zofia on average benefitting the most out of Ash's downfall.

Zofia currently leads Iana in presence across every region except for Europe. She's number one in both the NAL and APAC South leagues (both at 95%), second in APAC North (80%), third in the BR6 (86%), and one place behind Iana in fourth in EUL (55%).

Funnily enough, with the big exception of the EU League, this makes her more common than Ash was last season.

Zofia effectively is a pre-nerf Ash with stuns and the pros have noticed this.

It's only a matter of time now before Ubisoft sets their crosshairs over this new target to take her down a notch with Iana being Zofia's clear successor.

Clearly, we are just one week in, so things may change as we go forward. Nevertheless, this is an undeniable change to almost every single team around the world.